Bill Cosby is doing "extremely well" in prison, giving motivational speeches to his fellow inmates and working out consistently to get in shape behind bars, his spokesperson Andrew Wyatt said.

Wyatt confirmed reports Cosby is in high-demand at SCI Phoenix, the maximum security prison about 32km from Philadelphia where he began serving a three to 10-year prison term in September. 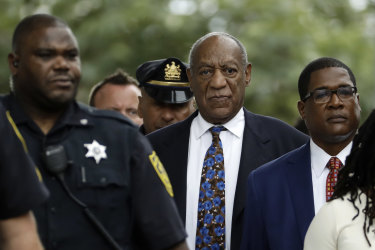 Cosby was convicted in April 2018 of drugging and sexually assaulting Andrea Constand at his home outside Philadelphia in 2004. He has been accused of sexual assault or misconduct by dozens of other women.

"Mr Cosby, roughly three months ago, had been requested by a number of inmates to come and speak at some of their support groups, and he debated about it and decided to take them up on their offer," Wyatt said by phone on Tuesday. "One group that he consistently speaks to is a group called 'Man Up.' These are guys that are going to be paroled in a few months, and he is talking to these guys because a lot of them have been in prison… and they are afraid of going back to (their) communities.

"They viewed him as their father figure. To them, he is America's dad," Wyatt added.

"He's extremely popular," Wyatt said. "Some of them come up to him and want to just talk and want to talk about various things like The Cosby Show and (other celebrities)."

During his speaking engagements, Wyatt said Cosby speaks to crowds of up to 200 men. He said the disgraced comedian uses humour to convey messages like "be a good father" and "be a productive citizen."

"Mr Cosby is blind, so he can't see the men he is speaking to, but the men who assist him on the inside, they let him know, and they give him a count of how many people are in the room," Wyatt said.

With the rest of his free time, Cosby is focusing on getting fit.

Wyatt said Cosby told him: "When I get out I'm going to wear all my suits."

Regarding his controversial Father's Day tweet, in which the comedian called himself America's dad, Wyatt said Cosby stands behind his message.

"He feels that it was received very well and the media just focused on the negative comments. As he always states, it's called journalistic malpractice and bullying. The media isn't going to focus on anything positive that people say about him on social media."