‘Blackfishing’: Alt-right pushes to co-opt Aboriginal Tent Embassy to cause

For the Aboriginal Tent Embassy on the banks of Lake Burley Griffin in the national capital, this is a milestone year. Celebrations will begin later this month to mark the 50th continuous year of occupation of a site originally set up to demand land rights, the protection of sacred sites, and proper compensation for land not returned.

The “embassy” is heritage listed and the world’s longest-standing protest. 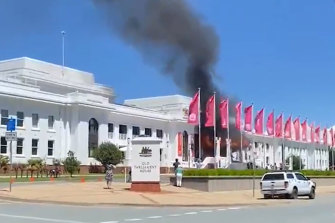 The December 30 fire at the Old Parliament House.Credit:Nine News

But before it can celebrate, its current occupiers must endure what amounts to an attempted hostile takeover by a coalition of alt-right “freedom” groups riffing on notions of “sovereignty” markedly different to the Sovereignty sought by most Aboriginal people.

Over the past two weeks, tensions have exploded into action and public consciousness, after a group of people purporting to be conducting a traditional “smoking ceremony” under the historic portico of the Old Parliament House set fire to its doors.

The fire, which Victorian Greens MP Lidia Thorpe initially appeared to celebrate before reversing herself, caused damage that Museum of Australian Democracy director Daryl Karp says may be unfixable. Soot covered many parts of the building and caused the building’s sprinkler system to go off, damaging original flooring. Five people are facing charges over the incident.

A statement issued by the Embassy Council on December 30 condemning the “smoking ceremony,” said it was done “without the knowledge, consent or mandate of the Embassy Council and Traditional Owners responsible for the regulation of the Aboriginal Tent Embassy”. 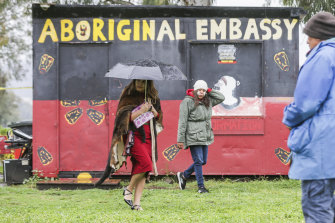 Earlier this week, the “freedom” protest group formed a campsite on the grounds outside the National Portrait Museum – the same area containing the cafe-restaurant where protesters trapped then Prime Minister Julia Gillard and Opposition Leader Tony Abbott after Abbott said it was time to move the embassy on. On Thursday, a heavy police presence forcibly evicted them, pushing them back towards the embassy.

There, in a place that has hosted generations of Aboriginal activists, the protest has effectively split into two divisions: one camp containing the Tent Embassy and an increasingly larger group behind and to the side of it in what is called the rose garden area.

The newcomers are an iteration of a growing, US-influenced protest movement in Australia that is trying to legitimise its various agendas by co-opting Indigenous people and issues through a process activists and academics have termed “Blackfishing”.

They first turned up at the Tent Embassy in early December and, according to Ngunnawal elder Matilda House-Williams, speaking to The Canberra Times, “there’s a whole tonne of them”.

When police forcibly moved them they responded with QAnon-style phrases, such as “you’re non-player characters” and “paedophile protectors”.

Video posts by some of the group’s adherents and influencers as well as its alt-right supporters reveal how gaining control of the Tent Embassy is only a stepping stone in a more ambitious scheme. They want to “take the chair” of Old Parliament House itself.

And despite a number of arrests after the disastrous smoking ceremony, it appears they are there to stay.

Daily call outs are now being made for “freedom” supporters to converge on the nation’s capital to join them.

At the head of the new protest group is Murrawiri and Budjiti environmental activist Bruce Shillingsworth, whose prominent activism around water shortages and related issues in the Murray Darling Basin have been nationally lauded. Around him are several Indigenous men and women already prominently involved in the alt-right “freedom” movement rallies in Sydney and Melbourne. None would speak to The Age and The Sydney Morning Herald.

Shillingsworth was closely associated with respected Yuin elder and cultural lore man Uncle Max Harrison, who was allied with the vaccine-sceptical Informed Medical Options Party and the broader “freedom” movement, before his sudden COVID-related death in early December. Uncle Max addressed the “millions march” rally in Sydney two weeks before he died in a COVID ward at the Sutherland Hospital.

Shillingsworth and his group, black and white, have called via social media videos for the broader “sovereign citizens” movement as well as Indigenous “Original Sovereigns” groups around the country to converge on Canberra in convoys.

When police moved them away from the portrait gallery on Thursday, they responded with QAnon-style phrases, such as “you’re non-player characters” and “paedophile protectors”. Indigenous members of the group demanded the police prove their jurisdiction over the area with “deeds and titles”, and Shillingsworth repeatedly demanded that $100 trillion in taxpayer gold be transferred to his personal bank account for breaches of a pseudo-legal contract he attempted to serve on senior officers.

A series of virtual meetings between prominent Indigenous group members and non-Indigenous alt-right activists suggest a plot to effectively copy the US Capitol Hill insurrection. For the Australian version, the target is Old Parliament House. 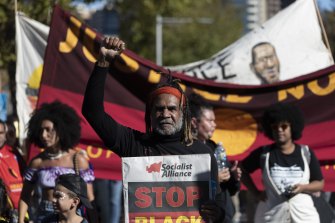 They believe the quasi-mystical locus of power in Australia is vested in the “seat” of the Old Parliament because that is the address listed on the ABN registrations of the Commonwealth’s economy and trade departments.

The new Parliament House, the seat of federal government since 1988, is “pretend,” they say, and the government’s jurisdiction “fiction”.

Over the past fortnight, Shillingsworth has identified himself as an Original Sovereign – a local variation of the international Freemen of the Land movement.

Many of the planning meetings tied to the new protest group involved Indigenous man David Cole, also known as Lurnpa, a leading figure in the Original Sovereign Tribal Federation (OSTF) which was established by non-indigenous man Mark McMurtrie aka Gunham Badi Jakamara after he was impressed in 2009 by the pseudo-legal counsel of David Wynn Millar, an American retired tool and die welder and self-appointed “king of Hawaii”. 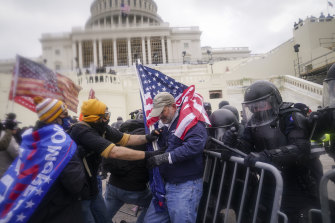 Scenes to fire the imagination: what some Australian alt-right protesters would like to see at Old Parliament House.Credit:AP

Last year The Age and Herald revealed the collaboration between the Original Sovereign Tribal Federation and former One Nation senator Rod Culleton who, at the time, was trying to establish a right-wing political party in a formal alliance with the Indigenous sovereign citizen movement.

In the United States, sovereign citizens are regarded by the Justice Department as a domestic terrorism threat after several armed actions in which law enforcement officers and civilian men, women and children have been killed. They do not have the same label in Australia.

‘Moses’ and the pandemic law

On December 30, video posted to social media accounts run by members of a Sovereign Citizens group showed demonstrators banging on the doors of Old Parliament House, which is now run as a museum. Shillingsworth’s son, known as Buddy, and Bundjalung woman Cindy Roberts (aka Widjabul Dubay) were among them.

Police made five arrests in the days after the fire. One who was arrested, released on bail, arrested again and released again was Nicholas Reed, who is accused of carrying numerous armfuls of kindling and several coolamon loads of “hot coals” to the front of Old Parliament House. An ACT court was told he had been shown in posts on social media stoking the fire. 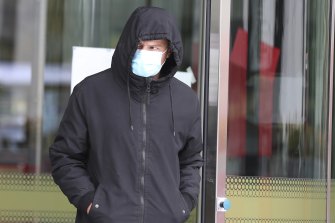 Reed, a white man who also goes by a “tribal” name, allegedly has a separate pending legal matter in Victoria, and is crowdfunding online for the Djab Wurrung Sovereign Tribal Government Fund, a campaign purportedly to benefit the Djab Wurrung people located in Victoria’s Western District. The most recent campaign has raised $3759.

The Australian has reported that Reed’s bail rules included that he live at an address which, according to property records, is owned by Business Council of Australia president Tim Reed and his wife, Karola Brent, a former Lane Cove councillor on Sydney’s north shore. Tim Reed declined to comment.

Among others in attendance at the fire, though not arrested, was Roberts, who in a video interview with Tartaria Australia on December 10 said she saw herself as Moses on the forecourt of Old Parliament House before revealing that she intended to knock the locks off the doors, enter and reclaim what was rightfully hers. 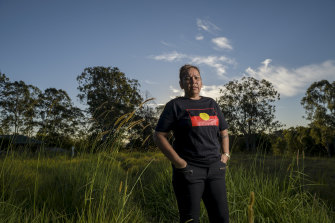 This week police made two more arrests in the area known as the parliamentary triangle. One was of Buddy Shillingsworth for outstanding warrants related to past driving offences. The other was a white man named Dylan “Didge” Wilson from the NSW Northern Rivers, a self-described “land lore marshal” recognised by a “circle of Elders across this continent”. Both were later released.

But the arrests and charges are not the end of it.

On Sunday, a strong cohort is expected to arrive from Victoria, many motivated by ongoing opposition to Victorian Premier Daniel Andrews, whose government succeeded in changing the state’s pandemic response legislation late in the year after weeks of protest by anti-vax and anti-lockdown groups on the steps of Spring Street. Among the props taken to protests were an apparently operational gallows.

Several posts to social media among this group have expressed anger at a decision by a court in Myrtleford, Victoria, in which the protesters had invested high hopes that Andrews would be found guilty of treason. These posts encourage supporters to head to Canberra.

When Senator Thorpe tweeted on the day of the fire: “Seems like the colonial system is burning down. Happy New Year everyone,” it seemed like the action might have broader significance in the Aboriginal protest community than it did. Thorpe later removed the tweet and this week told The Age and Herald: “I stand in solidarity with the Tent Embassy. The people responsible for the fire have disrespected Ngunnawal Traditional Owners. There is no place for anti-vaxxers and conspiracy theorists in the struggle for First Nations sovereignty.”

Back at the Tent Embassy, some key representatives are too nervous of the newcomers to speak on the record. But Ngunnawal and Ngambi traditional owners and senior figures from the earliest Tent Embassy protest cohorts of 1972 -73 have spoken out about the failure of the new group of protesters to observe cultural protocol and obtain consent to conduct their ceremonies on the site.

Meanwhile, as the federal government announced it would establish a $316.5 million Indigenous cultural centre within the parliamentary triangle nearby the area where the embassy stands, they are trying to prepare for the demonstrations and cultural ceremonies which will mark the golden anniversary. The work, they told The Age and Herald, was an assertion of commitment to the legacy of the embassy.

Prominent First Nations activist group Warriors of Aboriginal Resistance (WAR) is clear, though, on the question of sovereignty, and the attempt by the Original Sovereign movement to “co-opt the First Nations Sovereignty rights movement,” according to a spokesperson, Gamilaraay and Kooma woman Ruby Wharton.

The biggest difference between First Nations’ sovereignty and that being claimed by the sovereign citizen movement was simple, she said: “Sovereignty is our birthright.

“It’s delusional for any kind of comparison to be drawn here. It’s absolutely not the same and never will be.”