Boeing 737 and Airbus in near-miss at Edinburgh airport

A Boeing 737 landing at Edinburgh came within 950 yards of crashing into a departing Airbus with 350 people seconds from disaster, an investigation has found.

The Norwegian Air flight from New York touched down in Scotland just two seconds after the EasyJet plane had left the runway, heading for London.

Investigators said a trainee air traffic controller had been in the Edinburgh control tower and ‘lacked the experience to resolve the situation in a timely manner’.

An Air Accidents Investigation Branch (AAIB) report found there had been a ‘rapid’ closing of the gap between the two passenger planes. 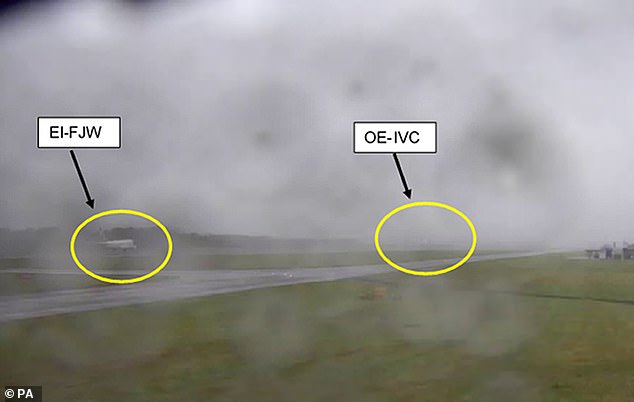 A Boeing 737 landing at Edinburgh (left) came within 950 yards of crashing into a departing Airbus (right), with 350 people seconds from disaster, an investigation has found

The near-miss on Edinburgh’s runway six happened in wet and cloudy conditions at 9.48am on the day in question, which was August 13, 2018.

The commercial passenger flights had a combined total of more than 350 passengers and crew on board.

In the event, none of them came to any harm but the alarming incident was declared a ‘runway incursion’ and an investigation ordered.

Investigators found that the crew of the outgoing Airbus plane were ‘completely unaware of the developing situation’ as they had been cleared for take-off.

The trainee controller cleared the EasyJet flight to take off although it was not yet aligned with the runway, the report said.

An instructor took over the tower’s radio frequency when the flight crew of the inbound plane had to remind the trainee that they not yet cleared to land.

In its report, the AAIB stated: ‘A landing Boeing 737 closed to within 950 yards of a departing Airbus A320 when landing at Edinburgh airport.

‘The airport air traffic control service provider defined this as a runway incursion as the 737 was over the runway surface when the A320 was still on its take-off roll.

‘A combination of factors, including brief delays to the departure of the A320 and the speed of the Boeing 737 being higher than normal, led to the reduction in separation before the controllers became aware of the closeness of the aircraft. 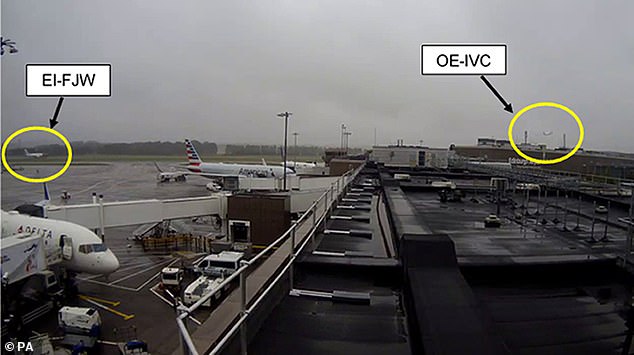 A CCTV view shows the two planes coming within alarming distance of each other at Edinburgh airport, in cloudy conditions in August last year

‘The trainee controller lacked the experience to resolve the situation in a timely manner and the supervising on-the-job training instructor judged it safer to let the 737 land than to initiate a go-around in proximity to the departing aircraft.’

The airport’s air navigation service provider is said to have reviewed operations at Edinburgh and taken a number of safety actions to improve procedures and its on-the-job training.

Responding to the report, a spokesman for Edinburgh Airport said: ‘Safety is absolutely paramount in our operations, a priority shared by ANS (Air Navigation Solutions), and we have discussed this incident in depth with them.

‘We are satisfied that the remedial measures put in place are robust and continue to regard safety as the number one priority.’