NFLers fell silent and stood arm-in-arm to call for racial equality on Thursday night — and some fans in the stands booed them for it.

The not-so-silent moment of silence played out in front of some 17,000 fans at Arrowhead Stadium in Kansas City, Mo., on Thursday, ahead of the NFL season opener between the hometown Chiefs and the Houston Texans.

The players linked arms and the volume in the stadium instantly went up, as many fans loudly tried to disrupt the brief gesture. Boos, whistles, shouts and jeers rang out from the stands, and fans cheered loudly after the roughly 10-second moment ended. 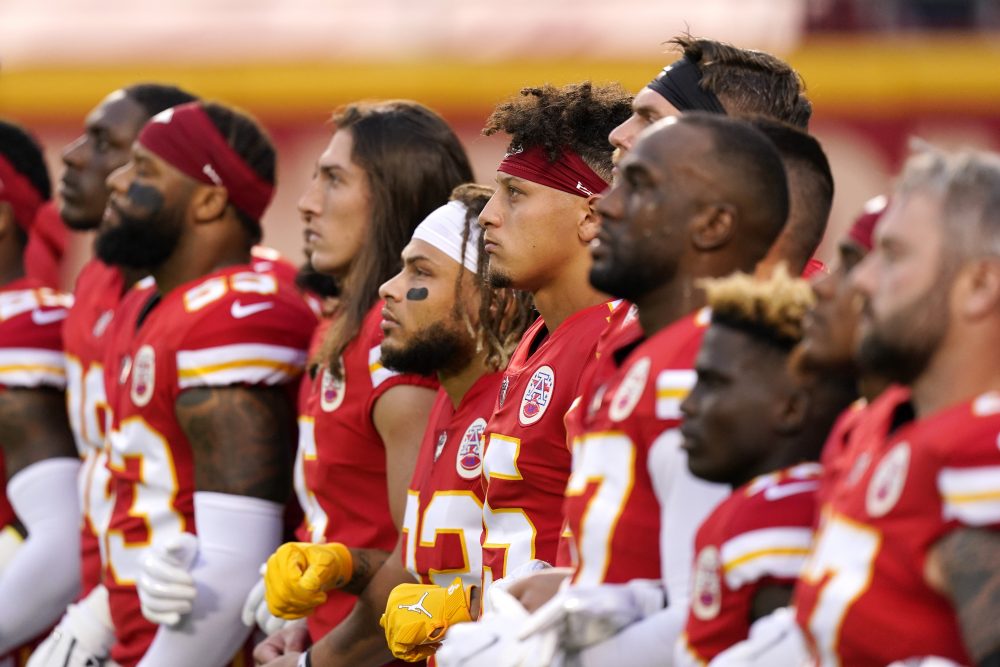 The players’ gesture of respect — and the fans’ gestures of disrespect — came at a moment of turmoil in the United States. The country has been wracked by protests over systemic racism and police brutality triggered by the death of George Floyd in police custody last May. Those protests have been fuelled by several other incidents of Black people being injured or killed by law enforcement, along with incendiary calls for “law and order” from the White House.

Roughly two-thirds of all NFL players are Black. Nearly all of the league’s owners are white, with two exceptions: a Pakistani-American man and an Asian-American woman.

The league has seen many acts of protest around police brutality in recent years, dating back to Colin Kaepernick taking a knee during the national anthem in 2016. Players have occasionally followed Kaepernick’s example since that happened, sparking outrage among some of their conservative fans. Kaepernick himself was blackballed by the league’s owners and hasn’t played since his season of protest.

The league has also become a lightning rod for criticism from U.S. President Donald Trump, who has repeatedly mischaracterized the players’ calls for equality as disrespect for the American anthem and flag.

The Chiefs and Texans had discussed how they would address the pregame before it happened on Thursday, and opted to show their solidarity in a moment separate from the anthem.

There was no live version of the anthem. Instead, Alicia Keys appeared on video to perform Lift Every Voice and Sing, a Black anthem, before The Star-Spangled Banner played on the video board. The visiting Texans remained in their locker room for the anthem and emerged afterwards to a chorus of boos.

“The moment of unity I personally thought was good,” Texans player J.J. Watt told reporters after the game. “The booing during that moment (of silence) was unfortunate,” he added. “I don’t fully understand that. There was no flag involved. There was nothing involved other than two teams coming together to show unity.”

The NFL tweeted a seemingly volume-controlled clip of the moment on Thursday night. However, broadcast footage and fan videos capture the sounds of the boos, which rang out shortly after the players lined up together.

Both head coaches claimed ignorance when it came to the boos.

“Maybe they were just booing us because we had just come on the field as the visiting team,” Texans coach Bill O’Brien said after the game. “But yeah, I thought that that was a nice gesture,” he said.

Several players from the game and from other teams said they were confused by the response.

“How can you be more upset about bringing awareness to racism than racism itself?” he tweeted.

Griffin also shared a video put out by the NFL Players Association on Thursday, which sought to explain why players are calling for justice. The video features Kaepernick, Griffin and several other players explaining their positions, responding to Trump and their far-right critics.

“All this stuff is going on in our country, and police are really killing Black people at an alarming rate,” Buffalo Bills player Josh Norman says in the video. “You’re going to take that and say we’re kneeling against the flag?”

Kansas City councilman Eric Brunch said it was an “embarrassing” moment for the city.

“Some NFL fans booing the players for standing and locking arms in a moment of silent unity proves that for them the ‘standing for the flag’ was always about perpetuating white supremacy,” he tweeted. “Let’s do better, KC.” 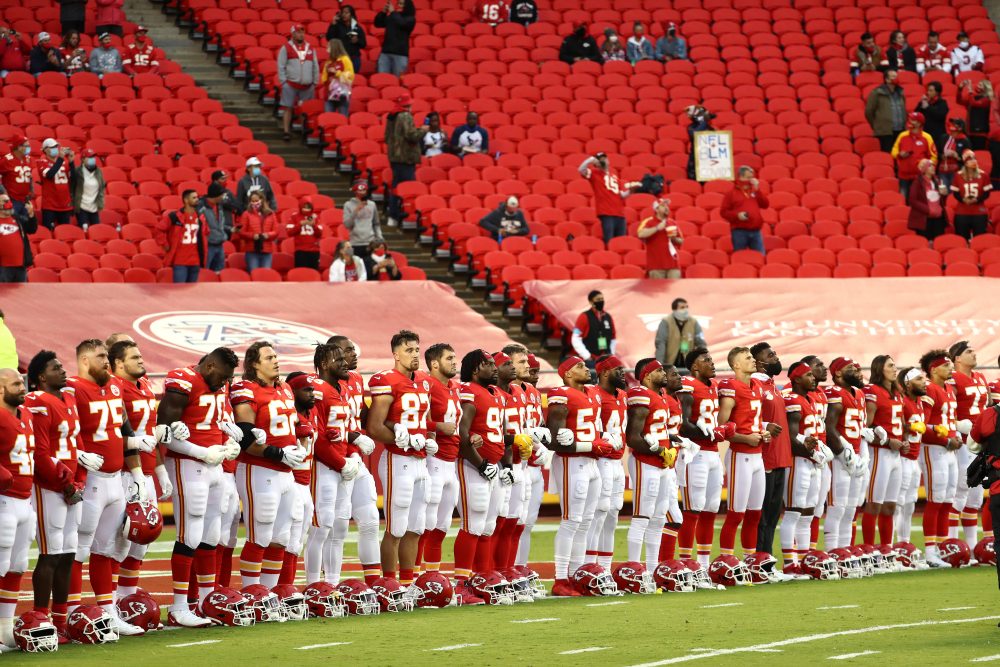 The NBA has gone even further than the NFL with its calls for racial justice. Last month, NBA players organized their own brief strike to protest the police shooting of Jacob Blake, a Black man who was shot in the back in Kenosha, Wis.

Several other major-league sports followed the NBA’s example, although the NFL was not playing at the time.

The NFL kicked off its season on Thursday in front of a dramatically reduced crowd due to the risk of COVID-19. The Chiefs’ stadium typically holds 80,000 fans, but only 17,000 were allowed at the game.

—With files from Reuters and The Associated Press