Boy, 8, shot in Highland Park attack IS paralyzed from waist down

Eight-year-old Highland Park shooting victim finally wakes up from coma to discover that he is PARALYZED: Is in a lot of pain but asking to see his injured twin brother and dog George

The family of an eight-year-old boy have confirmed their son has been ‘paralyzed from the waist down’ and will likely never walk again after being shot during the July 4th Highland Park parade attack.

Cooper Roberts’ spinal cord was severed during the attack in which seven people were killed, and more than 40 others were injured. His twin brother and mother were also wounded in the incident.

‘It’s going to be a new normal for him moving forward,’ family spokesman Anthony Loizzi said in a statement to CBS News. ‘It sounds (like) he’ll have significant issues moving forward, especially with walking.’

Cooper was conscious on Friday for the first time since the shooting and he was sedated. He has also been removed from a ventilator but is said to be in a lot of pain.

Due to the severity of his spinal cord injury, doctors have now confirmed that it is unlikely Cooper will ever walk again.

‘At this time, the doctors do not believe that he suffered any brain damage or cognitive impact from the shooting,’ Loizzi told CBS.

Now that Cooper is awake, he has been asking to see his twin brother, Luke, and his dog, George. 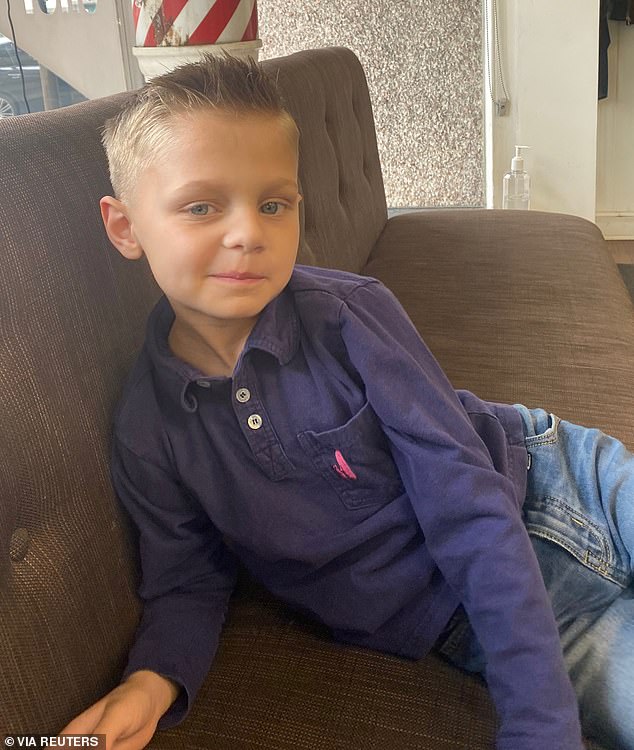 Cooper Roberts, 8, has been ‘paralyzed from the waist down’ and may never walk again after suffering a severed spinal cord from a gunshot wound to the chest in the July Fourth Highland Park attack on a Chicago-area parade 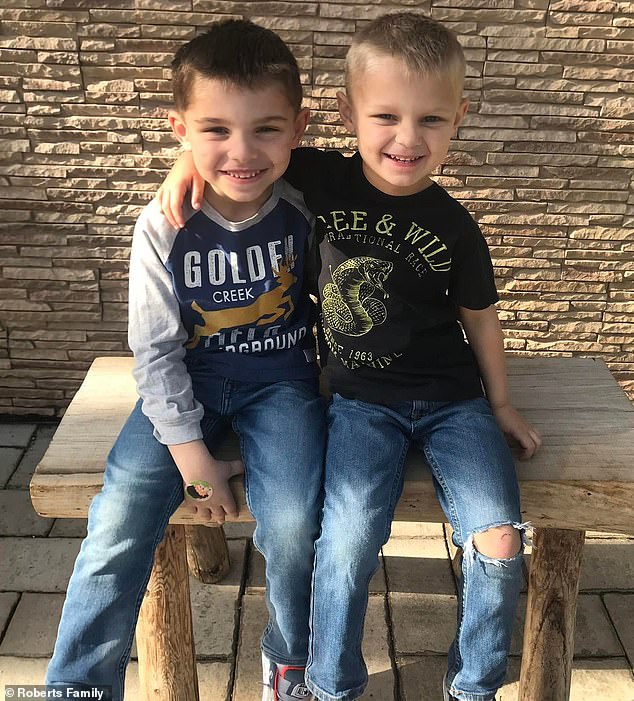 Cooper, right, is now conscious and breathing on his own. He has been asking to see his twin brother, Luke, left who was also injured in the attack 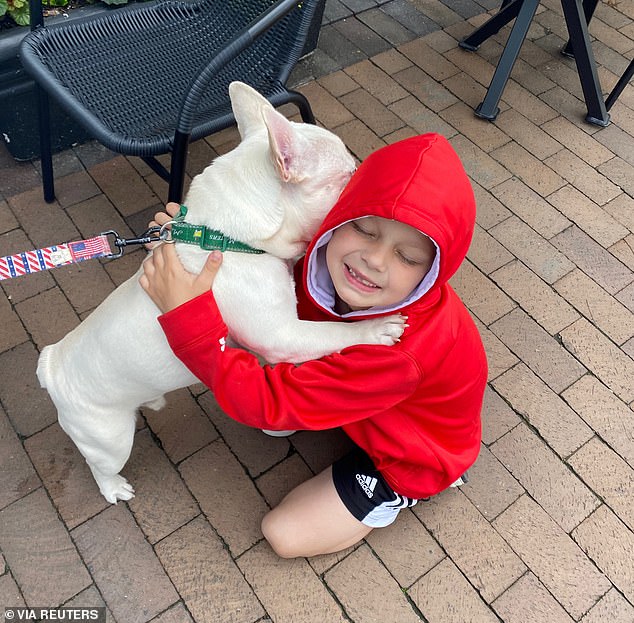 Cooper, with his dog George, was listed on Thursday in critical but stable condition, paralyzed from the waist down 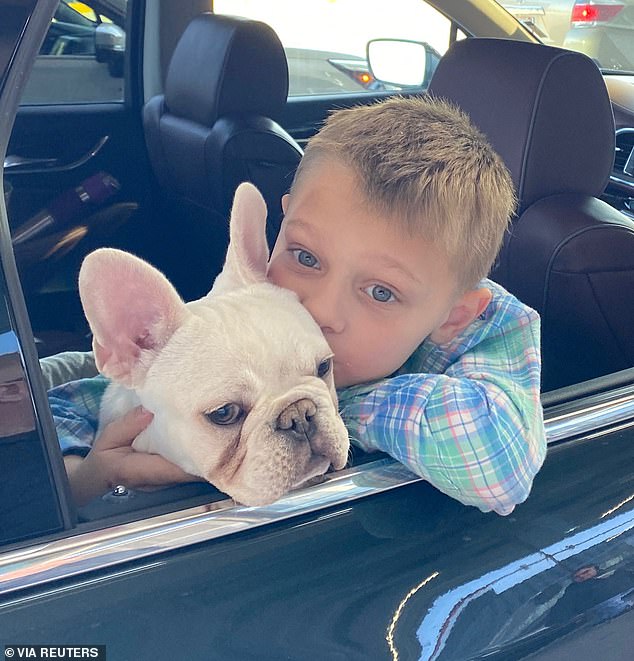 Cooper is seen with the family dog, George 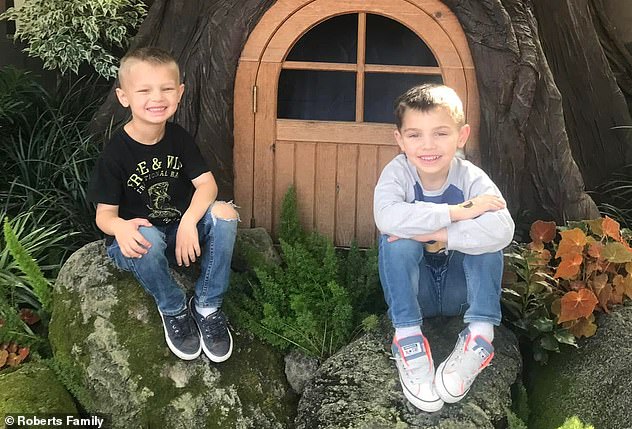 Twin brother Luke (right) suffered shrapnel wounds in his lower body but was discharged after doctors removed some of the debris, although they were unable to remove it all

Twin brother Luke was also hospitalized with shrapnel wounds in his lower body but was discharged after doctors removed some of the debris, although they were unable to remove it all.

The boys’ mother, Keely Roberts, who is the superintendent of a nearby school district, suffered gunshot wounds to her legs and feet, Loizzi told reporters on a Zoom call.

Their father, Jason Roberts, who also attended the parade, was uninjured.

The little boy who was described as a ‘very active’ child with a passion for baseball and is a big Milwaukee Brewers fan.

During Friday’s game, the Brewers hung a jersey in their dugout with the name Roberts family name on the back.

His mother, who underwent at least two surgeries herself, was so distraught at Cooper’s condition that she insisted on being released on Wednesday — sooner than doctors felt was best until her bleeding was under greater control — in order to be with her son at the children’s hospital, Loizzi told CBS.

‘After she received her second surgery, and then she received news that Cooper’s spinal cord had been severed, she told her doctors and nurses that they should either discharge her, or she’d walk out on her own,’ Loizzi said.

The boy has undergone several operations, including one on Wednesday night in which surgeons ‘finally closed his belly,’ the spokesman said.

‘He’s fighting as hard as he can,’ Loizzi said of the boy’s recovery. The family as a whole, including four adult sisters, were ‘devastated but focusing their energy on Cooper,’ he said.

‘It’s been a very emotional time for everyone in their circle,’ he said, adding he did not know whether brother Luke had yet been told of the severity of his twin’s condition. 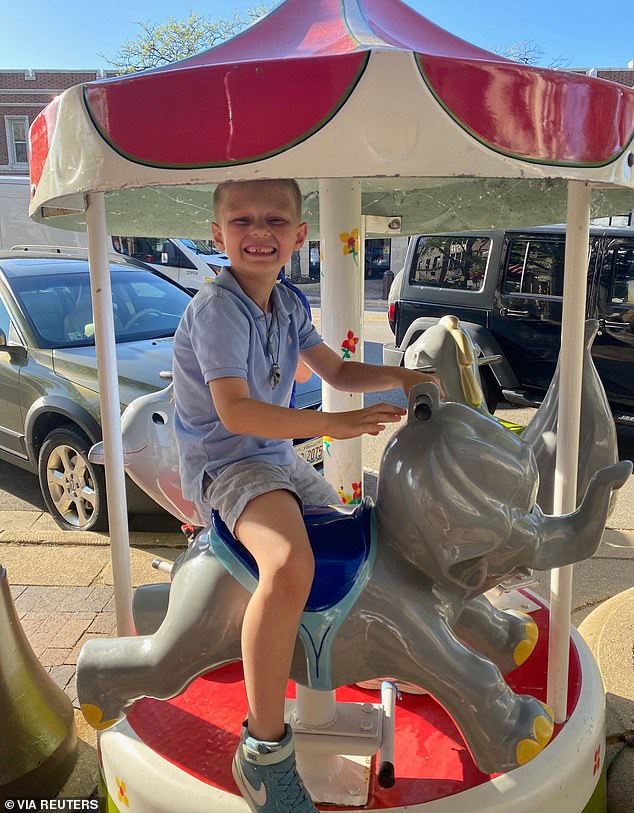 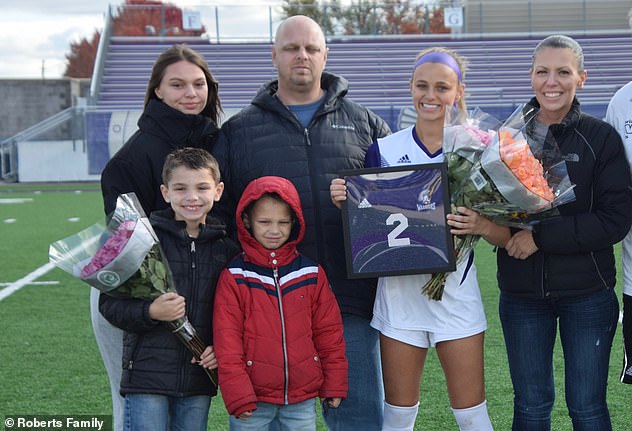 The Cooper family posing for a group picture. Bottom left is twin brother Luke, to his right Cooper, dad Jason at the back and mother Kelly to the right. His two older sisters are also seen 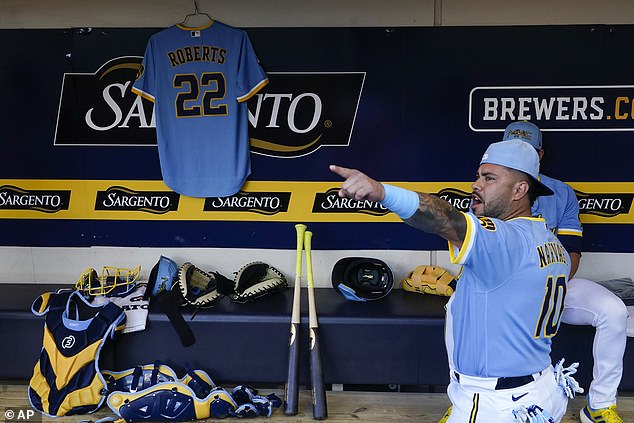 During Friday’s game, the Milwaukee Brewers hung a jersey in their dugout with the Roberts family name on the back

Loizzi told CBS that both Cooper and twin brother Luke ‘loved the parade’ and had attended the event in the past, but he did not know where along the parade route they were when the gunshots were fired.

They are ‘best friends, partners in crime,’ Cooper’s oldest sister said in a statement.

‘There’s nothing this kid can’t do and no words for the amount of goodness within him,’ she added.

Friends of the family established a GoFundMe page seeking to help address their medical bills and have so far managed to raise $1.1 million.

Seven people were injured and more than 40 injured in the July 4th attack after gunman Robert Crimo, 21, opened fire from a roof and took aim at paradegoers.

Among those killed were Irina McCarthy, 35, and her husband Kevin McCarthy, 37, whose two-year-old son, who is now orphaned, and was pulled from underneath his father’s body. 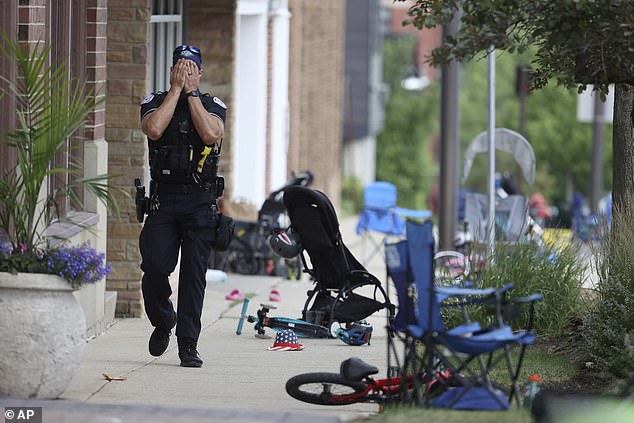 Seven people were injured and more than 40 injured in the July 4th attack after gunman Robert Crimo, 21, opened fire from a roof and took aim at paradegoers 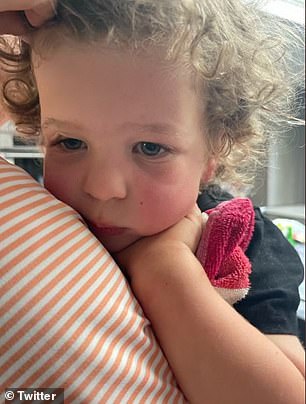 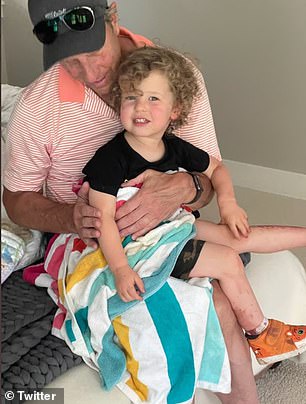 Dr. David Baum, a long time obstetrician in Highland Park, was attending the parade with his wife and children to watch his two-year-old grandson participate. When the shots rang out and others fled, he ran into the fray to try to help the victims.

In an interview with CNN, Baum described seeing victims with ‘wartime’ and ‘unspeakable’ injuries.

Crimo, who was arrested late Monday July 4, used a rifle ‘similar to an AR-15’ to spray more than 70 rounds from atop a commercial building into a crowd that had gathered for the parade in Highland Park, an affluent community of about 30,000 on the Lake Michigan shore, police said.

On Tuesday evening, Lake County State Attorney Eric Rinehart said he had been charged with seven counts of first-degree murder. He said ‘dozens’ more charges would follow, and that he hopes to send Crimo to prison for life.

The number of people who have died in the Highland Park Fourth of July massacre has risen to seven, as of Wednesday.

On Wednesday, the Cook County Medical Examiner’s office revealed that the seventh victim, Uvaldo, died at Evanston Hospital around 8 a.m. The number of injured victims now stands at 46, ranging in age from 8 to 85 years old.

Robert Crimo, 21, appeared in Lake County court on Wednesday, after being charged with seven counts of first-degree murder. He is expected to face a slew of other charges and is being held without bail.

Lake County State’s Attorney Eric Rinehart told the court that Crimo carried out a ‘calculated and premeditated attack’. He said Crimo confessed to standing on a roof above the parade route and took aim at people standing across the street, reloading his Smith & Wesson AR-15 rifle three times. 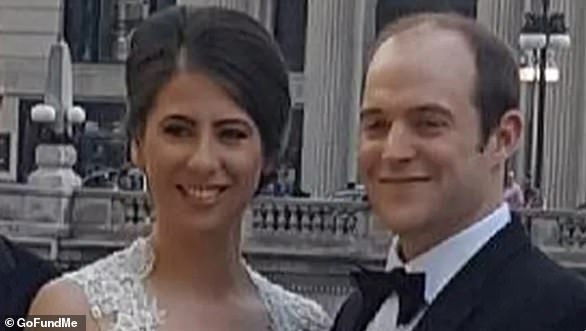 Irina and Kevin McCarthy, 35 and 37, were both killed in the massacre. Their two-year-old son, Aiden, was pulled from underneath his father’s body 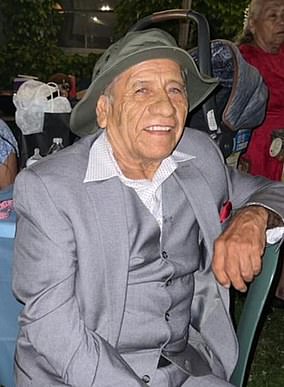 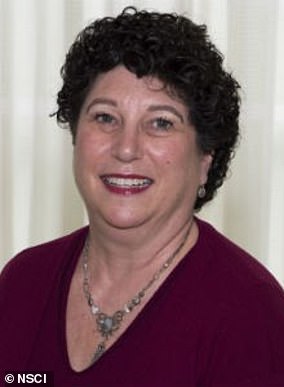 Nicolas Toledo, 76, had not wanted to attend the July 4 parade in Highland Park, Ill., on Monday, his granddaughter because he was in a wheelchair

Irina and Kevin McCarthy, 35 and 37, were the parents of a two-year-old boy, Aiden, who is now orphaned. He was pulled from underneath his father’s body and taken care of by paradegoers.

Nicolas Toledo, 76 was the first victim to be identified. He was a grandfather visiting his family from Mexico. His family said he was shot in the head as he sat in his wheelchair, his blood splattering on them.

Toledo had not wanted to attend the parade, his granddaughter told the New York Times. But because of his disabilities that restricted him to a wheelchair, and his family’s insistence of going, he obliged.

Another victim, Jacki Sundheim was a longtime teacher at the North Shore Congregation Israel synagogue. She is survived by her husband Bruce and daughter Leah, the Times of Israel reported.

‘There are no words sufficient to express the depth of our grief for Jacki’s death,’ the synagogue said in a statement.

On Wednesday, Katherine Goldstein’s daughter, Cassie, described how her mother was shot in the chest and fell down dead in front of her.

‘He shot her in the chest, and she fell down. And I knew she was dead,’ Cassie told ‘NBC Nightly News.’ ‘So I just told her that I loved her, but I couldn’t stop because he was still shooting everyone next to me.’ 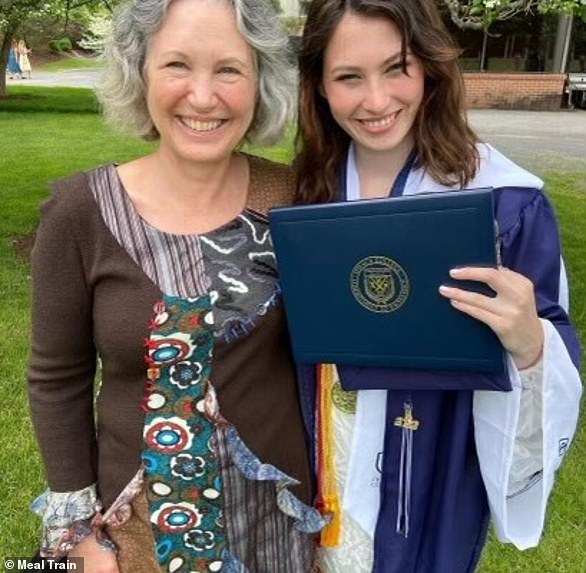 Katherine Goldstein, pictured left, was among the people killed in the Highland Park parade mass shooting on July 4 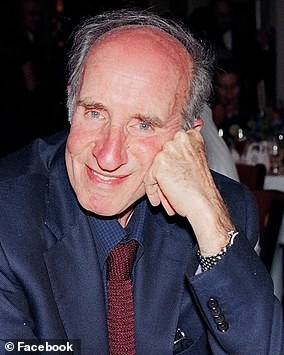 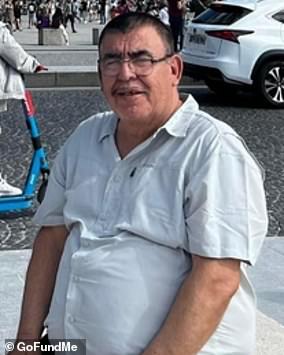 Steve Straus, 88, (left) was among the seven people who were killed during the Highland Park Fourth of July parade massacre. Eduardo Uvaldo, 65, (right) died on Wednesday. Family said he had been shot in the arm and back of the head

A local doctor who rushed into the carnage described the shooting victims as being ‘blown up’ by the attacker’s high-powered weapon.

Dr. David Baum, a long-time obstetrician in Highland Park, was attending the parade with his wife and children to watch his two-year-old grandson participate. When the shots rang out and others fled, he ran into the fray to try to help the victims.

In an interview with CNN, Baum described seeing victims with ‘wartime’ and ‘unspeakable’ injuries.

‘The people who were gone were blown up by that gunfire,’ Baum said. ‘The horrific scene of some of those bodies is unspeakable for the average person.’

‘Having been a physician, I’ve seen things in ERs, you know, you do see lots of blood. But the bodies were literally — some of the bodies — there was an evisceration injury from the power of this gun and the bullets.’

‘There was another person who had an unspeakable head injury. Unspeakable,’ he told CNN.

‘And the injuries  that I saw — I never served — but those are wartime injuries. Those are what are seen in victims of war, not victims at a parade,’ Baum said.

Baum said there were at least three doctors, a nurse and a nurse practitioner, who joined him in treating victims. He recalled paramedics covering up victims who they knew were dead at the scene.