Bill Vlahos spruiked himself as a horse racing expert who had a foolproof method of picking winners and encouraged others to enjoy the ride with him.

Instead, he took punters for mugs and defrauded friends, family and others of $17.5 million over six years in a scam a County Court judge labelled breathtaking in its audacity. 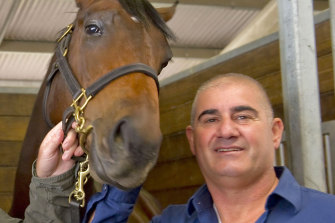 Bill Vlahos has been jailed for nine years for fraud offences.

Vlahos was on Friday jailed for nine years, to serve six years before he is eligible for parole, for ripping off 71 people in a large-scale punters club he ran between 2008 and 2013.

The Edge was promoted as a betting syndicate where punters could capitalise on Vlahos’ self-described genius for devising a mathematical formula for picking the right horse and his connection to an international betting expert, Daniel Maxwell, also known as “Max”.

But “Max” was a work of fiction and instead of laying the forecast bets he promised his members, Vlahos kept their money and used it to fund a life of luxury for himself, wife Joanne and their two children.

Judge Douglas Trapnell said Vlahos emailed The Edge members betting sheets on Friday nights and Saturday mornings, outlining the horses he claimed he would back at meetings in Melbourne and Sydney. On Sundays, he emailed sheets of the results of those races and details on how the punters allegedly fared. 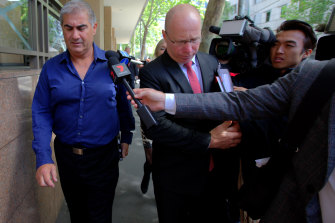 But the sheets bore no resemblance to what Vlahos did with the money, Judge Trapnell said, as the punters’ club was essentially a Ponzi scheme, where the greater the number of participants, the more money went his way. At one point, The Edge had 1800 members.

Vlahos was in 2016 charged with more than 350 counts of fraud and was accused of misappropriating $129 million. But after weeks of negotiations between his lawyers and prosecutors in 2019, he pleaded guilty to two rolled-up counts of obtaining a financial advantage by deception, and admitted he defrauded 71 people out of a combined $17.5 million.

His victims included friends, family members, other acquaintances and even a former babysitter to his children. They believed his knack of knowing the racing game and invested, but the money they lost has never been repaid.

Some victims lost houses and life savings, Judge Trapnell said, while one man who invested $800,000 lost all his assets and now had nothing to his name as he approached retirement age.

The impact of the financial losses left some feeling stupid and naive, others angry and many regretful for recruiting others. Some were later diagnosed with mental health problems, others reported lost friendships and a strain on family relationships, while the emotional and financial toll ended several marriages.

Judge Trapnell said Vlahos’ deceptions and persistent offending – which continued into 2013 even though his scheme was near collapse and police were investigating – had a devastating and traumatic impact on many.

“I assess your moral culpability as being very high,” he told the 56-year-old, who watched the online sentence from prison.

“It is clear you must have known the impact your offending would have on the victims.

“Yet you continued your deceptive scheme unrelenting and unrepentant. The audaciousness of your behaviour is breathtaking.”

Vlahos splurged some money invested in The Edge on a $165,000 holiday house in Torquay, a $30,000 jacuzzi, a $71,000 Audi and a $150,000 Lexus, and first-class holidays to Singapore and Dubai. He also used punters’ money to buy racehorses to give himself extra clout in the industry.

Judge Trapnell said there was no suggestion Ms Vlahos knew of the scam or was complicit in her husband’s crimes.

He accepted Vlahos was motivated by “sheer greed, a need for personal financial gain and a desire for self-aggrandisement”.

But he accepted Vlahos’ borderline and narcissistic personality disorders mitigated his crimes, while his plea of guilty spared the community and victims the time and expenses of a string of back-to-back trials.

Vlahos grew up in housing commission flats in Prahran and worked as a counsellor and in hotels before devoting himself to professional punting. He has already served almost two years.