Britain sees an eight per cent rise in asylum seekers

The number of asylum seekers coming to Britain has risen by nearly 10 per cent after more than 37,000 people applied to stay in the UK last year.

The figure is eight per cent higher than in 2017 when 34,780 applications were submitted to the Home Office.

Newly released data shows Britain is the sixth highest destination for migrants in Europe, with Germany at the top after recording 180,000 requests for asylum last year.

France, Greece, Italy and Spain are also above the UK, according to the report by the European Asylum Support Office (EASO), which revealed there were 664,480 applications across Europe in total last year.

The data shows Iranians made up the highest percentage of asylum seekers in the UK in 2018 at 11 per cent. 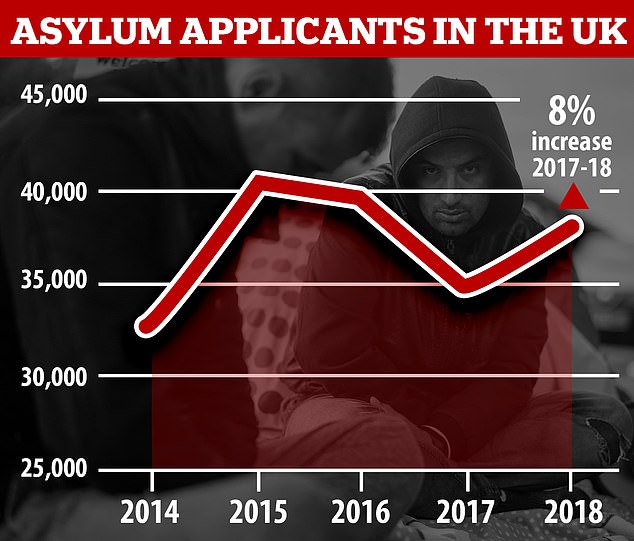 This graph shows how the change in the number of asylum seekers arriving in Britain each year, with an eight per cent rise between 2017 and 2018 recorded

It comes as a record 163 migrants were picked up off the coast of the UK by Border Force officials in June.

And more than 700 migrants have been picked up on British waters since last November.

In December, Home Secretary Sajid Javid declared a major incident after 138 migrants were picked up.

He called in extra Border Force cutters in a bid to stem the surge, but 140 made it into the UK last month.

A Home Office spokeswoman said: ‘Anyone crossing the Channel in a small boat is taking a huge risk with their life and the lives of their children.

‘Since the Home Secretary declared a major incident in December, two cutters have returned to UK waters from overseas operations.

‘We have also agreed a joint action plan with France and increased activity out of the Joint Coordination and Information Centre in Calais.

‘Earlier this month, the Home Secretary and the French Interior Minister, Christophe Castaner, agreed to continue to explore options to reinforce the efforts already being made. 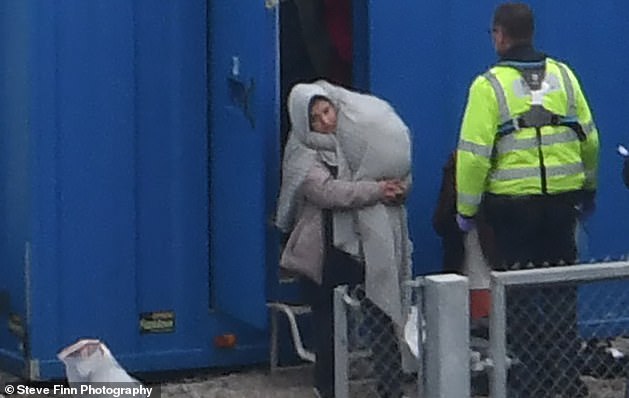 Pictured is a woman who was among 38 migrants to reach Kent earlier this month. The 38 people were made up of men, women and children, all claiming to be either Iranian or Iraqi

‘It is an established principle that those in need of protection should claim asylum in the first safe country they reach and since January more than 35 people who arrived illegally in the UK in small boats have been returned to Europe.’

The EASO report showed there was a decrease in the the total amount of applications across Europe for a third consecutive year.

And 39 per cent of the applicants were successful on their first attempt, down seven per cent on 2017.

Although fewer positive decisions were handed out, 55 per cent of those gave the asylum seeker refugee status.

Syria (13 per cent), Afghanistan and Iraq (seven per cent each) were the three main countries of origin of applicants in the EU+ in 2018.

The top 10 citizenships of origin also included Pakistan, Nigeria, Iran, Turkey (four per cent each) and Venezuela, Albania and Georgia (three per cent each).