British fighters could be 'forced to march through Red Square'

Hundreds of prisoners of war including captured British fighters could be ‘forced to march through Red Square’ during Putin’s Victory Day military parade, analysts fear

Hundreds of prisoners of war – including captured British fighters – could be forced to march through Moscow’s Red Square during Vladimir Putin’s Victory Day military parade, a think tank has warned.

The Ukraine-based Centre for Defence Strategies said that 500 captured fighters could be ‘forced to go through Red Square for cameras’, according to The Times.

Three British fighters could be among the 500 after Aiden Aslin, 28, and Shaun Pinner, 48, were captured by Russian forces in the besieged city of Mariupol last month while they were fighting along-side Ukrainian defenders.

The pair, who had both lived in Ukraine for some time, were paraded on Russian state television after being seized when a large number of fighters surrendered.

A third British fighter, Andrew Hill, was also detained in Russia after a video surfaced showing the father of four from Plymouth being interrogated on Russian TV.

President Putin’s annual military parade is held on May 9 to mark the anniversary of the end of fighting in Europe during the Second World War, in 1945. 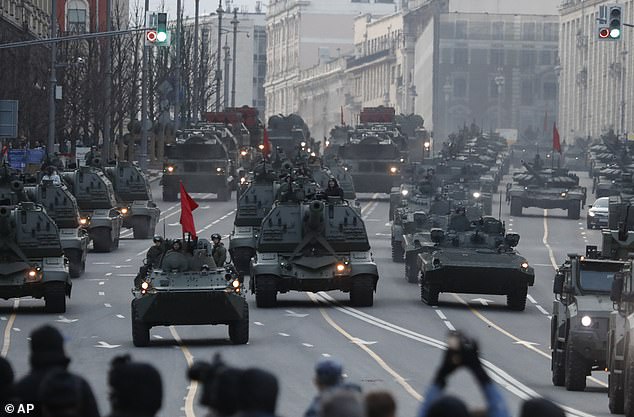 Some analysts had predicted that Putin wanted to be in a position where he could declare some form of victory in Ukraine on May 9. But with the parade now just six days away, that is looking less likely.

Instead, Western officials believe that Putin could use the event to formally declare war on Ukraine, which would mean he could mobilise Russia’s reserve forces.

Speaking on Friday, Britain’s Defence Secretary Ben Wallace predicted the Russian president would declare a new war against the world’s ‘Nazis’ at the parade.

Mr Wallace told LBC Radio that Putin could use the occasion to declare a new war on who he would call the world’s Nazis to galvanise his populace in another push against the Ukrainian defenders.

‘I would not be surprised… that he is probably going to declare on May Day that “we are now at war with the world’s Nazis and we need to mass mobilise the Russian people”,’ Mr Wallace said on Friday morning.

“Putin, having failed in nearly all objectives, may seek to consolidate what he’s got… and just be a sort of cancerous growth within the country,’ he continued.

‘We have to help Ukrainians effectively get the limpet off the rock and keep the momentum pushing them back.’ 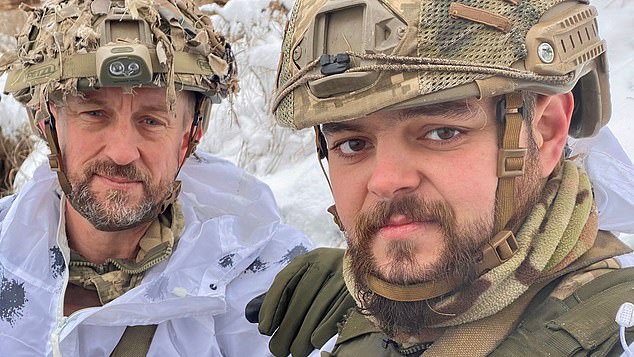 Three British fighters could be among the 500 prisoners of war after Aiden Aslin (right), 28, and Shaun Pinner (left), 48, were captured by Russian forces in the besieged city of Mariupol last month while they were fighting along-side Ukrainian defenders 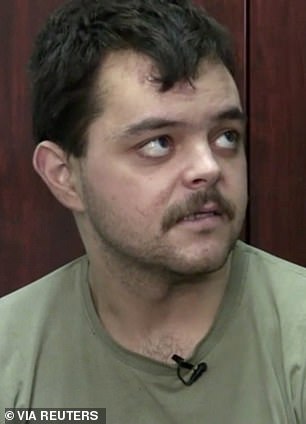 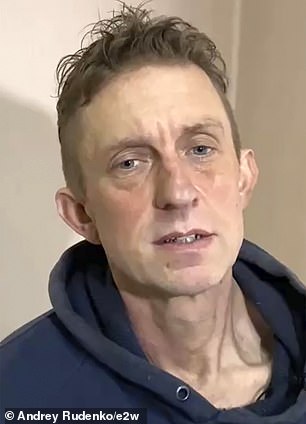 Pictured: Aiden Aslin (left) and Shaun Pinner (right), who had both lived in Ukraine for some time, were paraded on Russian state television after being seized when a large number of fighters surrendered 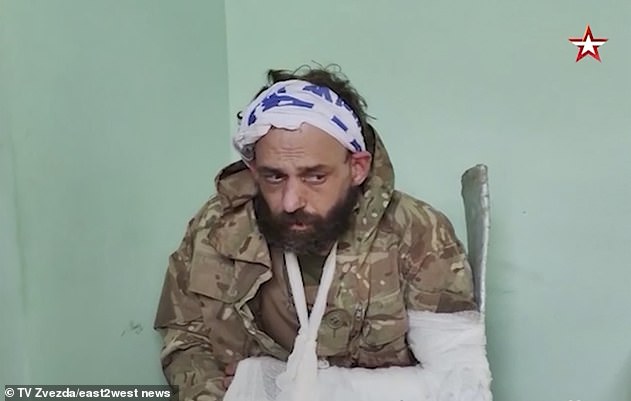 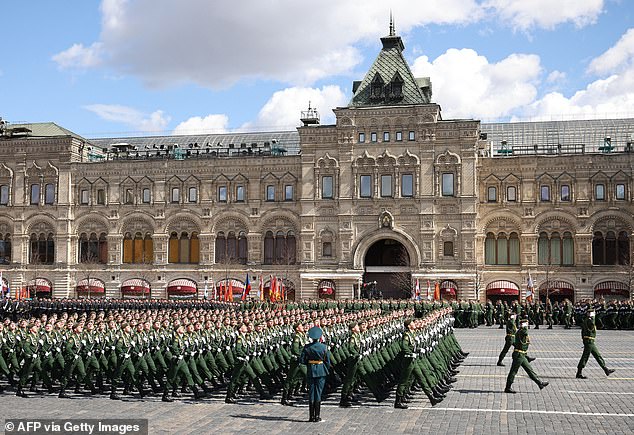 Each year, thousands of Russian soldiers march through Moscow’s famous red square while showing off the country’s latest hardware – including tanks, artillery, nuclear missiles and armoured vehicles – while fighter jets stream overhead. Pictured: The parade in 2021

Mr Wallace said that while he had no intelligence saying that Putin was planning such an announcement, it was likely given his previous comments.

‘We have seen a number of statements from Putin about this becoming a war, “this is a proxy war” – which it isn’t – and “Nazis are everywhere”, basically, “they are not just in Ukraine, NATO is full of Nazis’.

‘I think he will try to move from his “special operation”,’ Mr Wallace told LBC. ‘He’s been rolling the pitch, laying the ground for being able to say “look, this is now a war against Nazis, and what I need is more people. I need more Russian cannon fodder”.’

While several countries, including the UK, mark VE Day – the anniversary of the allied victory over Nazi Germany in the Second World War – on May 8, Russia marks the data on May 9 due to the time difference.

The end of all combat actions came at 23:01 Central European Time on Tuesday May 8, 1945 – which was already May 9 in Soviet Bloc countries, including in Russia.

The pope said on Tuesday on that Hungarian Prime Minister Viktor Orban had told him Russia planned to end the war on May 9. Russian Foreign Minister Sergei Lavrov said earlier this week that Moscow would not rush to meet that symbolic date.

Putin launched his illegal invasion of Ukraine on February 24, calling it a ‘special military operation’ to ‘de-nazify’ Russia’s neighbour – despite its president Volodymyr Zelensky being Jewish, and the far-right enjoying little support in the country.

With Putin’s military having failed in their first wave of military objectives, Moscow has re-focused its efforts on seizing both the east and southern coast of Ukraine. 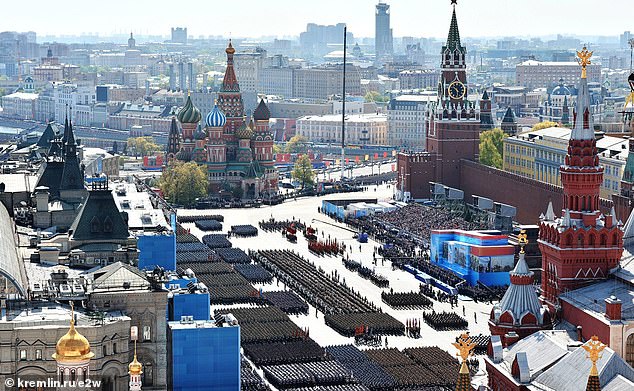 Some analysts had predicted that Putin wanted to be in a position where he could declare some form of victory in Ukraine on May 9. But with the parade now just six days away, that is looking less likely. Western officials now believe Putin will use the occasion to officially declare war on Ukraine, which would allow him to deploy Russia’s reserve forces

However, as in the first months of the invasion, Russian forces are being met with heavy Ukrainian resistance from Kyiv’s determined armies.

Britain’s Ministry of Defence said today that Russia’s invasion of Ukraine has been hampered by strategic incompetence that has left its armed forces ‘significantly weaker’ and less feared, despite Moscow doubling its military budget in 13 years.

According to the MoD, from 2005 to 2018 Russia pumped billions into its ‘New Look’ military modernisation project, investing heavily in its land, air and sea capabilities.

This has seen the development of new missile systems (that have been hailed by President Vladimir Putin as being superior to western equivalents), the overhaul of its Soviet-era tactics and the procurement of more modern military equipment.

However, despite spending more than $65billion on its military in 2021, Russian forces have been unable to dominate Ukraine due to poor strategy and execution, the MoD said.

In an update yesterday, the MoD said that Russia has lost a quarter of its combat forces deployed in Ukraine since the beginning of the invasion.

According to intelligence experts, Russia committed more than 120 battalion tactical groups, some 65 per cent of their entire ground combat strength.

As a result, Putin’s forces have been wakened ‘both materially and conceptually,’ the MoD said in its daily update on the situation in Ukraine. Western sanctions mean it will take years for the country’s military to recover from its losses.

‘Russia’s defence budget approximately doubled between 2005 and 2018, with investment in several high-end air, land and sea capabilities,’ the MoD said on Tuesday. ‘From 2008 this underpinned the expansive military modernisation programme New Look.

‘However, the modernisation of its physical equipment has not enabled Russia to dominate Ukraine. Failures both in strategic planning and operational execution have left it unable to translate numerical strength into decisive advantage.’

‘Russia’s military is now significantly weaker, both materially and conceptually, as a result of its invasion of Ukraine,’ Britain’s defence ministry added. ‘Recovery from this will be exacerbated by sanctions. This will have a lasting impact on Russia’s ability to deploy conventional military force.’