As many as 2 million Californians were plunged into darkness over a four-hour span late Friday in the state's first rolling blackouts since the 2001 energy crisis – and that was just day one.

America's west coast is set to have its hottest two weeks in 70 years, putting even more strain on power grids after California imposed its first rolling blackouts since 2001.

Excessive heat warnings and watches stretch from the Pacific Coast inland to Montana, Utah and Arizona, according to the National Weather Service. Sacramento is forecast to be 109 degrees Fahrenheit (43 Celsius) by Tuesday. Pasadena could hit 108. 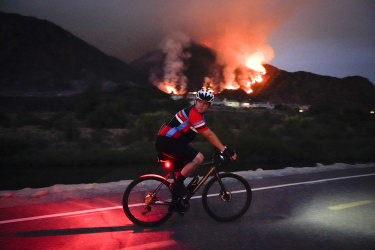 The sudden and largely unannounced outages in California are a stark reminder of the fragility of power grids in the face of extreme weather. Searing heat has gripped cities around the globe in recent weeks, including Brussels, Paris and New York.

The outages in California started at about 6:30 p.m. on Friday, when the state's grid operator determined through a complex calculation that power reserves had fallen below a critical threshold and called a Stage 3 grid emergency, which triggers what it describes as "load interruption."

The last time such a declaration was made during the electricity crisis of 2000 and 2001, hundreds of thousands of homes and businesses took turns going dark, power prices surged to a record and the state's largest utility was forced into bankruptcy.

Grid operators will monitor the situation throughout the weekend and into next week, Gonzales said. The odds of rolling outages on Saturday and Sunday might prove lower as demand is typically weaker outside of work hours.