“Last night, while attending House of Commons proceedings virtually, in a non-public setting, I urinated without realising I was on camera,” said William Amos, a member of Prime Minister Justin Trudeau’s ruling Liberal party, in an apology posted to Twitter late on Thursday. 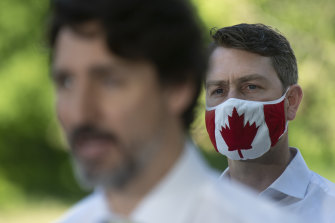 William Amos, wearing a Canadian mask and standing behind PM Justin Trudeau, has apologised again after an on-screen gaffe.Credit:The Canadian Press via AP

“I am deeply embarrassed by my actions and the distress they may have caused anybody who witnessed them,” he said. “I apologise unreservedly.”

Amos said he will remain a member of parliament, but will “temporarily” give up his parliamentary secretary and committee roles. Amos acts as an assistant to Industry Minister François-Philippe Champagne.

The Quebec-based politician said he would be seeking assistance, but did not make clear what type of help he was looking for.

Amos first came to media attention in April, after a screenshot was leaked to media showing him completely naked on an internal government video feed. 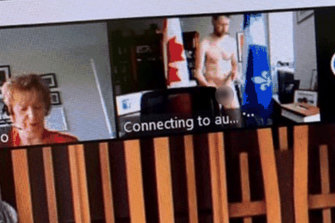 A screenshot of Quebec MP William Amos on a Zoom call with colleagues earlier in the year.

At the time, Amos said he was changing into to work clothes after a jog and did not realise his camera was turned on.