‘Can’t cry wolf all the time’: US officials resist restrictions despite BA.5 ‘downpour’

Chicago: COVID-19 is surging around the United States again in what experts consider the most transmissible variant of the pandemic yet.

But something is different this time: the public health authorities are holding back.

In Chicago, where the county’s COVID warning level was raised to “high” last week, the city’s top doctor said there was no reason for residents to let the virus control their lives. The state health director in Louisiana likened a new rise in COVID cases there to a downpour — “a surge within a surge” — but characterised the situation as concerning but not alarming. 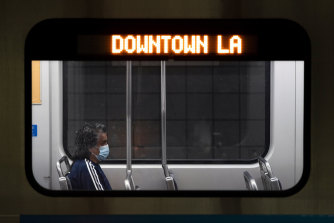 Weekly deaths in Los Angeles County from the coronavirus has doubled to 100 last week. The US largest country by population, is facing a return to a broad indoor mask mandate if current trends in hospital admissions continue.Credit:AP

And in King County, Washington, officials were discussing reissuing a mask mandate but would prefer that the public mask up voluntarily. “We’re not going to be able to have infinite series of mandates forcing people to do this, that and the other,” he said.

The latest surge, driven by a spike of BA.5 subvariant cases since May, has sent infections rising in at least 40 states. Hospitalisations have climbed by 20 per cent in the last two weeks, leaving more than 40,000 coronavirus patients in hospitals on an average day.

More than two years after the pandemic began, though, officials are sounding only quiet warnings amid a picture that they hope has been changed by vaccines, treatments and rising immunity. 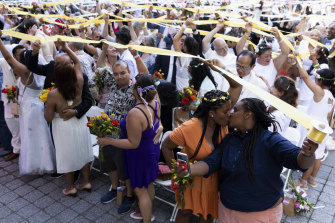 Couples, whose weddings were cancelled or diminished during the COVID-19 pandemic, participate in a symbolic multicultural ceremony at Damrosch Park, New York, on Sunday.Credit:AP

Deaths are rising, but only modestly. And state and local public health officials say they also must now factor in a reality that is obvious along the streets from Seattle to New York City: most Americans are meeting a new COVID wave with a collective shrug, shunning masks, joining crowds indoors and moving on from the endless barrage of virus warnings of months past.

“I feel strongly that you can’t just kind of cry wolf all the time,” said Dr Allison Arwady, the commissioner of the Chicago Health Department, who said she would wait to see whether hospitals become strained before considering another city-wide mask mandate.

Complicating the country’s understanding of this BA.5 wave is a dearth of data. Not since the earliest months of the pandemic has there been so little precise information about the number of actual infections in the US. As public testing sites have closed and at-home testing — if people test at all — has grown common, the publicly reported data has become scarce and spotty.

Still, experts say, the outlines of a new wave are undeniable. 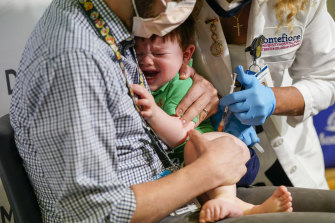 One-year old Asher Schwab receives his Moderna COVID shop in the Bronx, New York last month. US officials are relying on vaccinations, instead of mask mandates and restrictions, to curb infections.Credit:AP

The BA.5 subvariant, which was first detected in South Africa in January and spread to a number of European countries, was responsible for 1 per cent of cases in the US in mid-May but now represents at least two-thirds of new cases.

Anita Kurian, an assistant director for the health department in San Antonio, said cases have been rising in the area for six weeks in a row. But some measures, like the low number of deaths so far, suggest that the nation is entering a newer and less lethal stage of the pandemic where vaccines and treatments have significantly improved chances of survival, she said.

“We are nowhere at the level where we were with the previous surges,” she said.

So far, the current wave’s toll of hospitalisations and deaths pales in comparison to previous spikes. During the peak of the Omicron surge in early 2022, close to 159,000 people were hospitalised on any given day, four times the current rate. 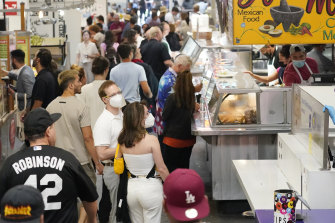 Still, even as federal health authorities reiterated calls for people to test for COVID before attending large indoor gatherings or visiting especially vulnerable, immunocompromised people, they are striking a delicate balance, telling Americans that while they do not need to upend their lives, they must pay attention to the COVID threat.

“We should not let it disrupt our lives,” Dr Anthony Fauci, President Joe Biden’s chief medical adviser on the virus, said at a White House news briefing in which he added that new variants could continue to emerge. “But we cannot deny that it is a reality that we need to deal with.”

As health officials in many places have avoided issuing new virus restrictions during the latest surge, California has stood out as an exception. There, public health authorities have issued stark warnings and moved towards reimposing restrictions.

The warnings have been spurred by worrisome data, experts said. Walgreens said that more than half of the COVID tests administered at its California stores have returned with positive results. Surveys of wastewater in the Bay Area suggest this surge could be the biggest yet.

And the number of weekly deaths in Los Angeles County from the coronavirus has doubled from around 50 a month ago to 100 last week. The deaths are still below the levels of the winter Omicron surge, when more than 400 were dying weekly in the county.

Officials in Los Angeles say they plan to reinstate a countywide indoor mask mandate as early as the end of this month.

Charles Chiu, an infectious disease specialist and virologist at the University of California, San Francisco, said data emerging from patients suggests that BA.5 does not cause more severe disease in patients than other Omicron variants. But he said he is concerned that the variant is so infectious and so able to evade the protections of vaccination and prior infection that it could be unstoppable.

“It looks as if we are unable to control it,” he said.

Chiu said he was sympathetic to the plight of government officials seeking to mitigate the spread of the virus. They are up against a public that chafes at renewed directives, even in parts of the country where people were previously most willing to go along. In places where COVID mitigation measures are mandatory, like on New York subways, adherence to masking rules is increasingly spotty.