Canterbury Cathedral bosses have been accused by locals of ‘privileging’ private school pupils after they restricted access to the grounds in a ‘safeguarding’ move.

For decades residents of Canterbury, Kent have accessed the precincts of the 11th century cathedral through an 1,800 year old Roman archway, Queningate, cut into the city wall.

But the gate’s use has been restricted almost entirely to pupils at the £41,000-a-year King’s School – Britain’s oldest school – which has several buildings on cathedral grounds.

Sean Sayers, 79, who lives a four-minute walk away said the decision has created ‘a huge amount of anger in the town’ as he argued there is an effective public right of way through the gate – something which the cathedral disputes.

‘I’ve lived here for 50 years and ever since then I’ve used the Queningate entrance to access the city,’ Mr Sayers said.

‘Other people I know whose parents and grandparents grew up here said it’s been used by residents for time immemorial. That, it seems to me, creates a public right of way.’ 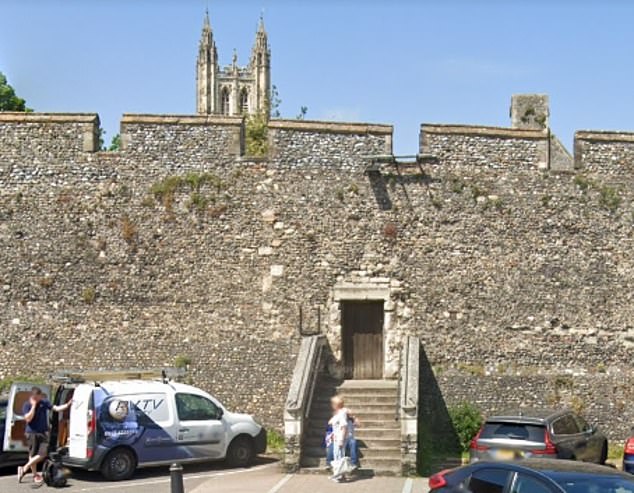 For decades residents of Canterbury, Kent have accessed the precincts of the 11th century cathedral through an 1,800 year old Roman archway, Queningate (pictured), cut into the city wall 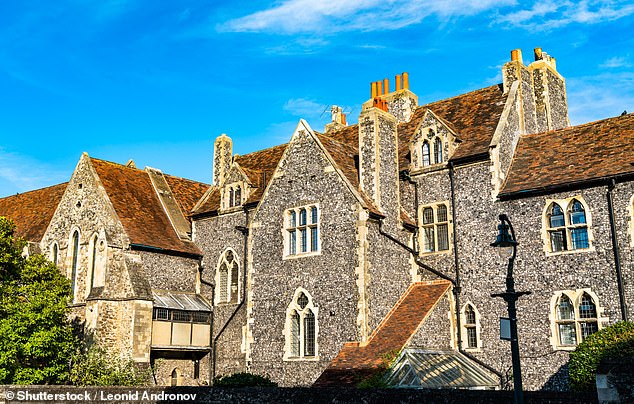 He added: ‘We like walking through the precincts because it’s safe and traffic-free. It’s not a matter of it being a shortcut, it’s just a lovely route and such a beautiful place to be able to walk past.

‘It has a long tradition of use and has been an amenity for the whole community.

‘But more recently the cathedral bosses started becoming much more restrictive. Without any explanation or warning they have closed all the entrances to the precincts but one.

‘We’ve had no notice – people just turned up at those gates and found out we couldn’t go through them anymore.’

According to Sean – a retired philosophy professor at the University of Kent – when he first moved to the city, the cathedral grounds were free to access.

In later years Canterbury Cathedral, which is famed for being the focus of the 1170 pilgrimage of Thomas Becket, began charging non-residents for entrance.

But locals were issued with passes – giving them unrestricted access to the precincts.

Queningate, which is thought to have been constructed around 270AD, is the last remaining entrance of the five original gates into the Roman city.

It is currently undergoing restoration work but once this is completed its use will be restricted almost exclusively to pupils and staff from The King’s School.

The independent boarding school, which charges £13,655 per term for its 13 to 18-year-old pupils, has a number of classrooms within the cathedral’s precincts.

Both the school and cathedral bosses have raised concerns that unmanaged access to the site could pose a risk to the children.

But grandfather-of-three Sean described the justification for shutting the gate to locals as ‘outrageous’, as The King’s School has property across the city – requiring its pupils to leave the premises to move between classrooms. 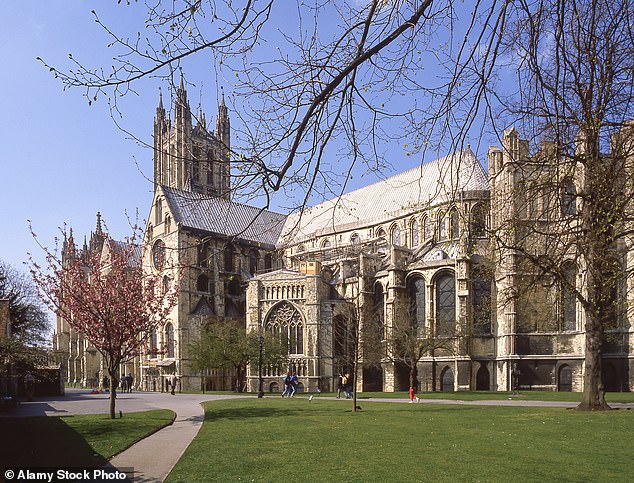 He said: ‘I think what causes particular outrage here is that The King’s School, which is an exclusive private school, seems to be given privileges denied to the local residents.

‘It has buildings throughout the town. In fact, there’s a whole street of them in one area but they can’t close the street to the public so why should they be able to close the precincts?

‘They have to walk from one building to another – there’s no difference.

‘Why should the public be prevented from using the precincts on that basis?

‘It’s perfectly legitimate for them to say the public cannot go into the school buildings on the site, but we’ve never been able to do that anyway.

‘They’re treating the precinct like their own private premises.’

Sean said he has already consulted a lawyer about the possibility of establishing a public right of way through the gate.

The married dad-of-two added: ‘It probably is private property but that doesn’t mean that we don’t have the right to cross it – like the right of way across people’s fields and private grounds.

‘Whether there’s a legal loophole there we will have to find out, but it’s always been a public amenity.

‘I don’t understand why they can’t have a system of passes like they do have at the moment.

‘I have not spoken to a single person who isn’t against it, so this not the last they will hear of us.’

But Canterbury Cathedral has insisted that the precincts are private property and can therefore be managed accordingly.

They stressed that the changes have been made in the interest of the safety of the pupils at The King’s School and that the school will oversee an electronic pass system allowing its students access.

In June, MailOnline revealed that King’s School had accepted a ‘major donation’ from a close ally of Vladimir Putin who was sanctioned by the UK over the war.

A MailOnline investigation found the school had accepted money from a company founded by and run by Dmitry Mazepin, 64.

It is unclear exactly how much cash Russian fertiliser producer Uralchem JSC gave to the school, but it was listed as a ‘major benefactor’ between 2011 and 2018.

Uralchem manufactures a number of chemicals including ammonium nitrate and has its headquarters in Moscow.

Belarus-born Mr Mazepin is accused of being in the ‘closest circle of Vladimir Putin’ by the EU who imposed sanctions on him earlier this year after the invasion of Ukraine. The UK soon followed suit with their own restrictions.

A spokesperson said the cathedral cannot share data about the city’s residents with the school, nor can the school share its students’ data with them due to GDPR restrictions, so a shared pass system is not a possibility. 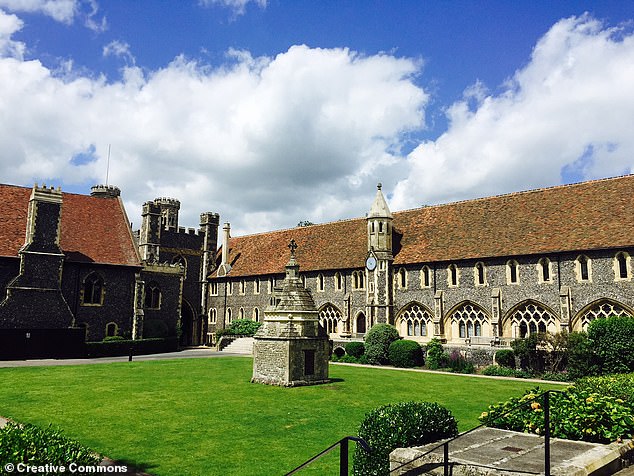 The King’s School (pictured) is Britain’s oldest public school and charges £41,000 a year

He added: ‘The Cathedral Precincts are a beautiful space which we want as many locals as possible to enjoy.

‘This is why free access is available to Precinct Pass-holders, local university students, and refugees living in the city, and why piloted free evening access for the general public has recently been reintroduced.

‘There is always free access to services of worship, and everyone is welcome to attend.

‘In order to safely manage access to this important religious and heritage site, we ask that everyone enters and exits via Christ Church Gate in the Buttermarket.

‘This is the historic main entrance to The Precincts and Cathedral used for hundreds of years by worshippers, pilgrims and visitors alike and, since The Queen’s death, the many hundreds who have come to lay flowers and sign Books of Condolence.

‘The other two entrances – Mint Yard and Queningate – provide access to King’s School and, in the interests of safeguarding and security, are for use by the school’s pupils and staff only.

‘This is not unusual or unreasonable – no school in the UK allows unmanaged public access to their site.

‘We have received complaints from a local resident who believes he is entitled to use Queningate and The Precincts as a shortcut from his house to the town centre. We have been in conversation with him to explain that this is not true.

‘There is not, and never has been, a public right of way or right of access to the Cathedral Precincts – or a right to use specific Gates – and, as a place of burial, it is legally impossible to create or infer one.

‘We want to reassure all our Precinct Pass-holders that they are free to enjoy the Cathedral’s public spaces during opening hours as frequently as they want. They just need to enter and exit via the main Christ Church Gate.

‘For anyone with a mobility issue attending a service of worship, access via Mint Yard Gate or Postern Gate is permitted where it is not practical for them to enter the Precincts via Christ Church Gate.’

A spokesperson for The King’s School added: ‘The safeguarding and protection of our children is our highest priority.

‘We work very closely with the Dean & Chapter who are ultimately responsible for all aspects of access (and security) into the Cathedral Precincts.’