There may be tensions in parts of the Royal Family but Princess Anne’s clan appeared a model of unity yesterday.

The Princess Royal watched as her ex-husband, Captain Mark Phillips, walked his daughter from his second marriage – to Hawaiian equestrian Sandy Pflueger – down the aisle.

Bride Stephanie, 24, grew up on Anne’s Gatcombe Park estate, where Cpt Phillips, now 73, continued to live after divorcing the Queen’s daughter in 1992. It meant Stephanie was raised close to her half-siblings Zara and Peter Phillips, who were there with their partners Mike Tindall and Lindsay Wallace to watch her tie to knot with her long-term partner William Hosier.

In keeping with the sense of marital and ex-marital bliss, Peter’s ex-wife Autumn also attended the ceremony at St Mary The Virgin Church in Tetbury, Gloucestershire, with her boyfriend, property developer Donal Mulryan.

Zara, who wore a blue dress, high nude stilettos and an eye-catching hat, watched proudly as her daughters, Mia, eight, and Lena, four, took the role of bridesmaids with Peter and Autumn’s daughters, Savannah, 11, and ten-year-old Isla. 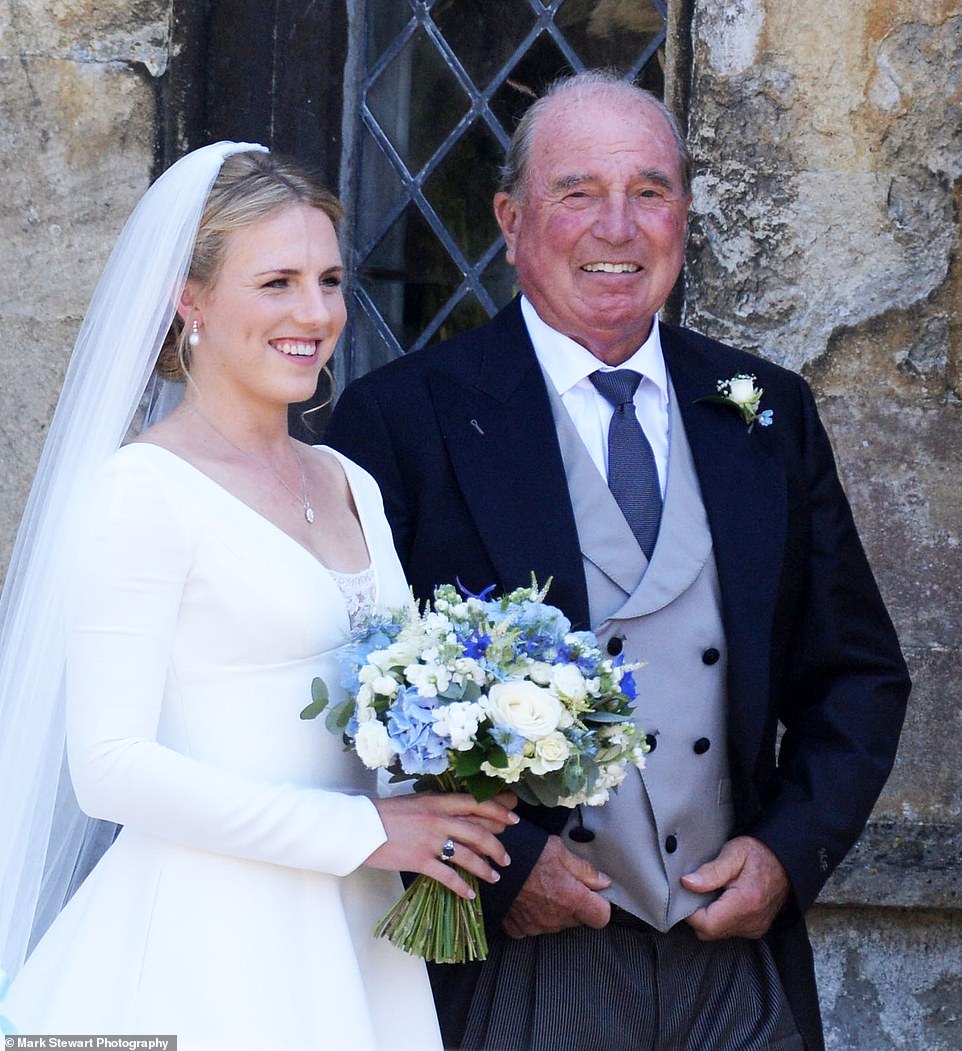 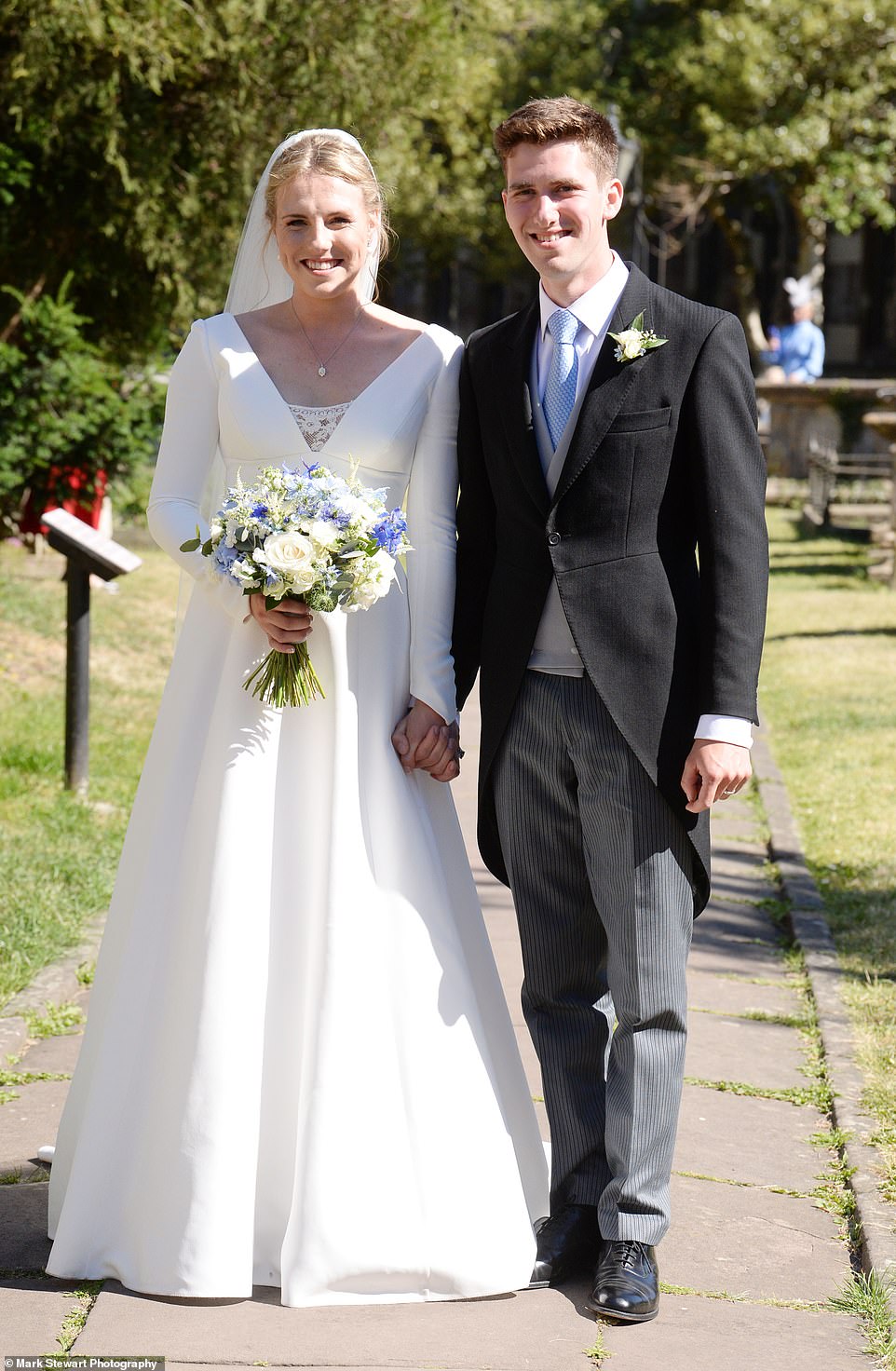 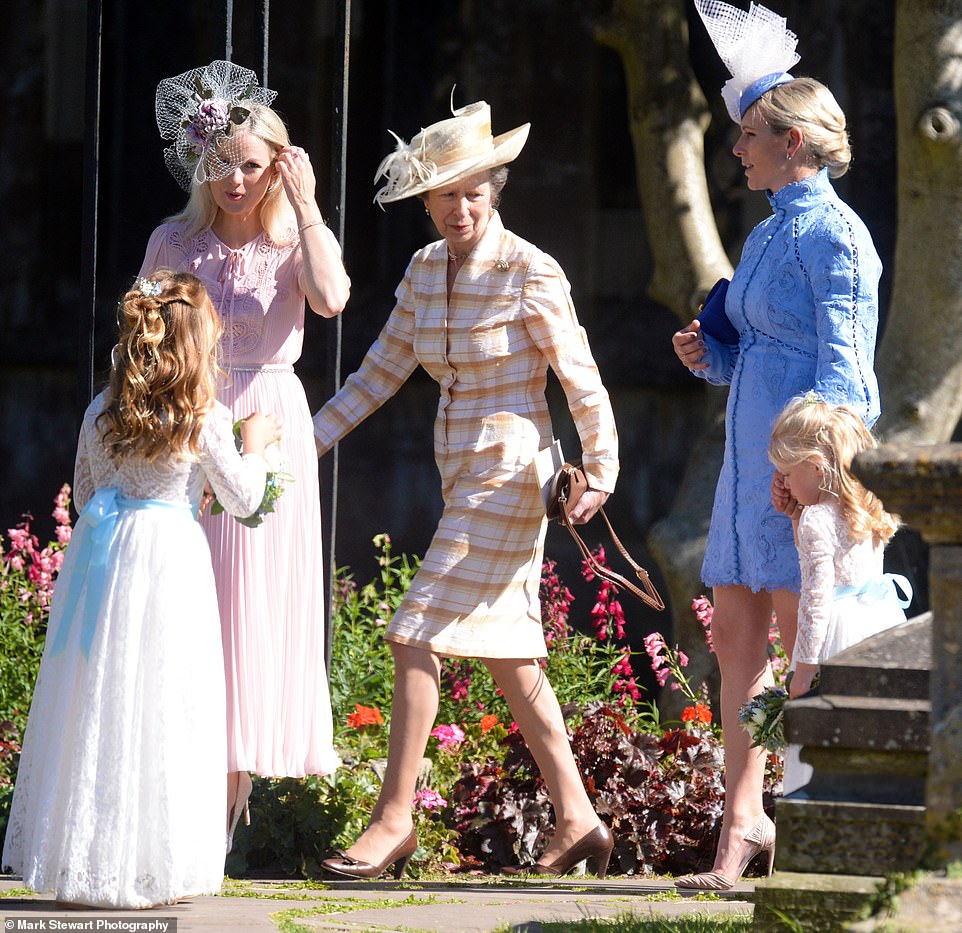 The Princess Royal was in attendance, wearing a chequered orange and brown dress and maroon heels 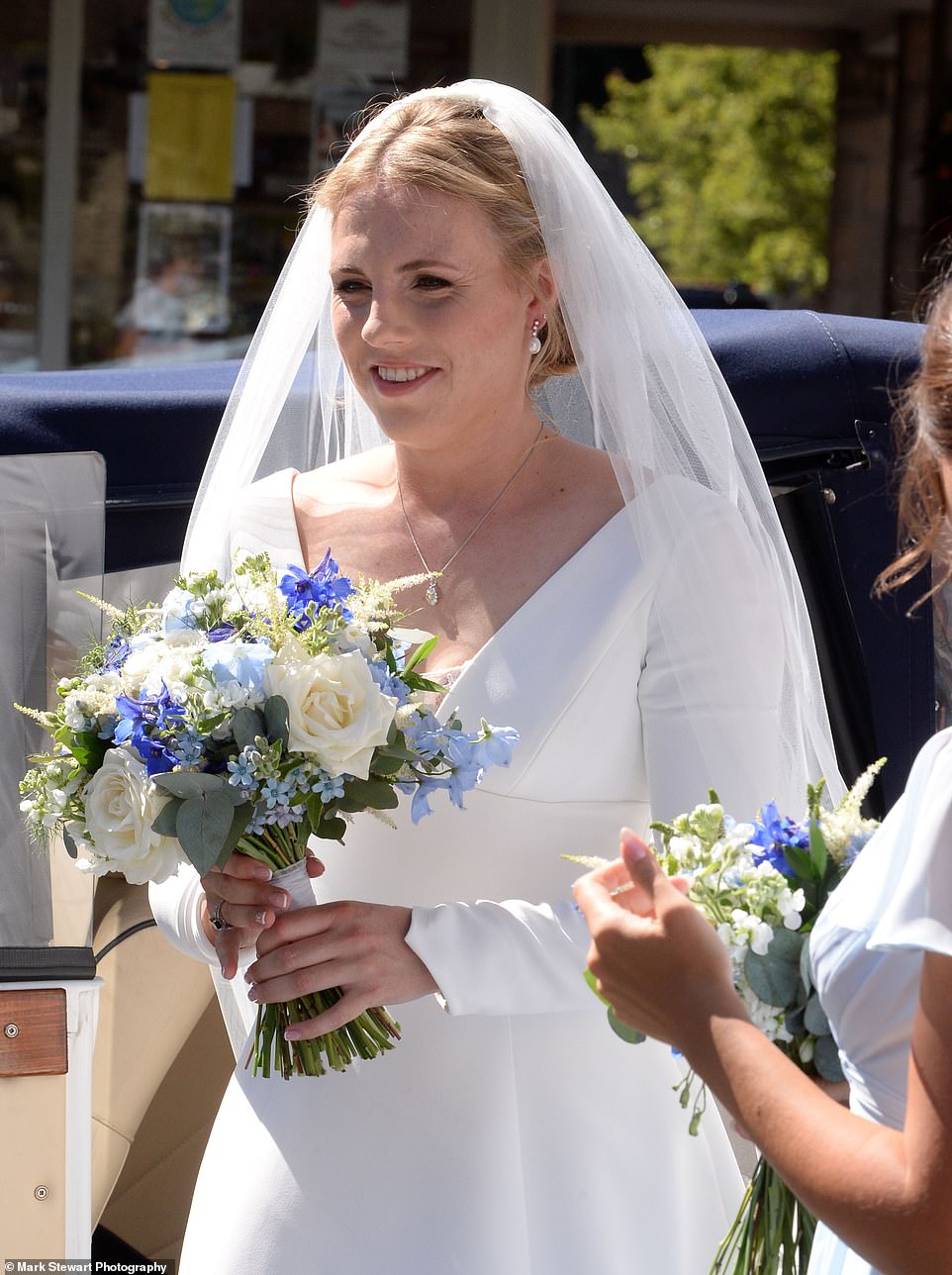 The bride looked angelic as she stepped out of the car, arriving at the church. She was greeted by her family 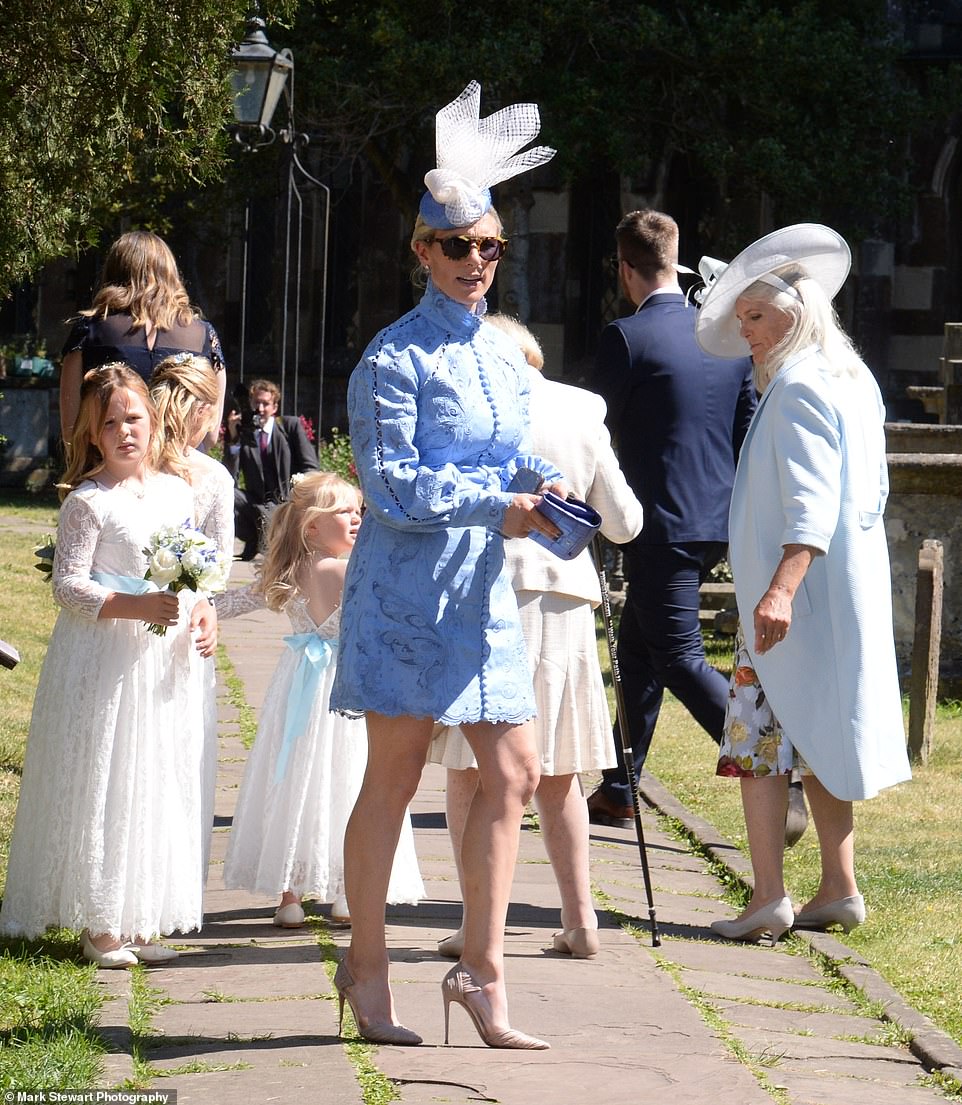 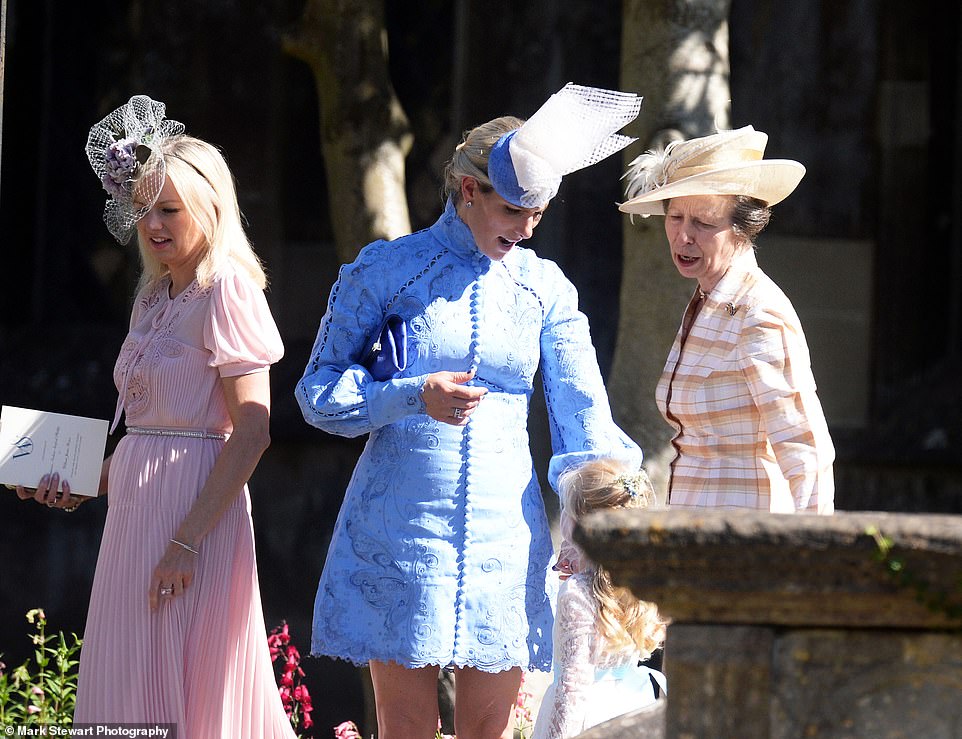 She watched proudly as her daughters, Mia, eight, and Lena, four, took the role of bridesmaids with Peter and Autumn’s daughters, Savannah, 11, and ten-year-old Isla 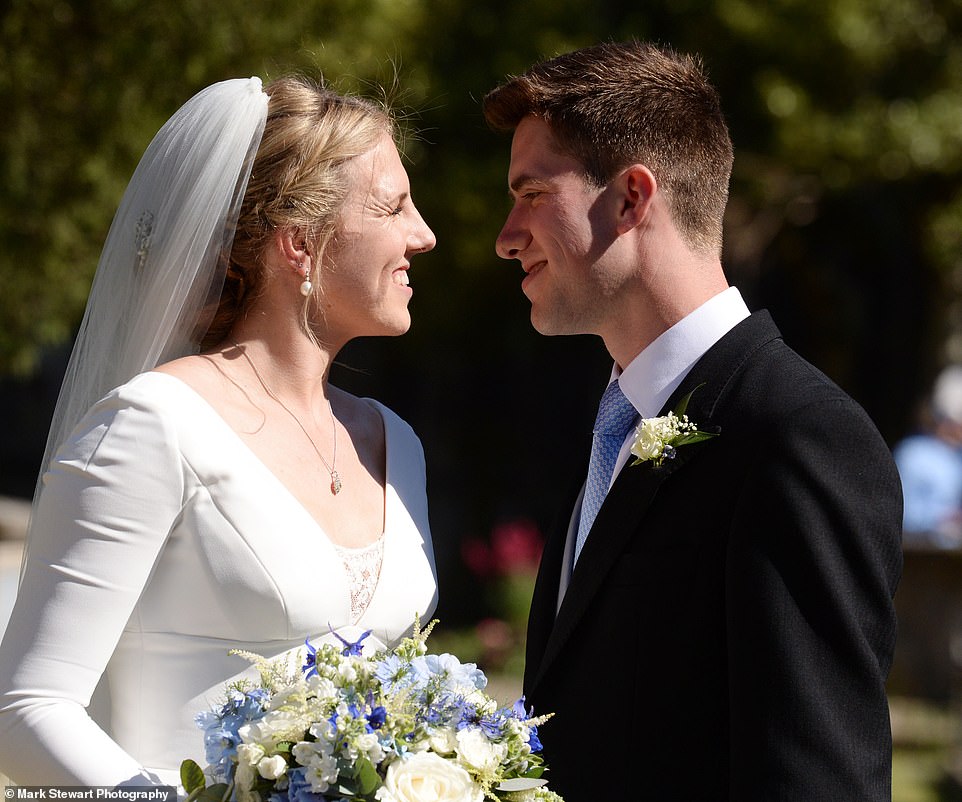 The couple looked adoringly at each other after they were married. Stephanie’s now husband is believed to have popped the question on May 9, after which she showed off her dazzling oval sapphire and diamond engagement ring 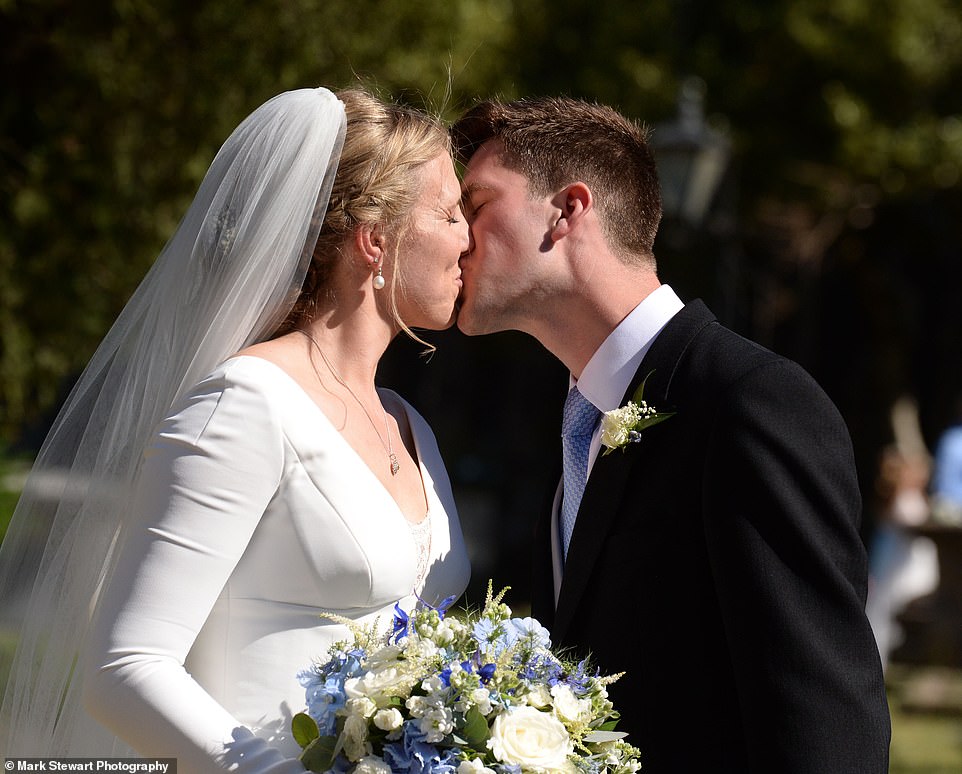 The 24-year-old event rider is the daughter of Princess Anne’s first husband Captain Mark Phillips and his Hawaiian-born second wife Sandy Pflueger, who was part of the US dressage team at the 1984 Los Angeles Olympics.

Like her parents and older sibling Zara, Stephanie is a keen equestrian – often sharing pictures of her beloved horses on Instagram, while she also grew up a stone’s throwaway from them on Aston Farm on the Gatcombe Park estate.

However, her career as an eventing pro has not quite matched up to that of Olympic silver medallist Zara, her most recent success being placing fifth at Pontispool in May 2019.

Stephanie attended the prestigious Dean Close School in Cheltenham, where fees cost up to £13,900 per term.

After achieving CCD at A-Level, she went on to study at Business Management at the University of Worcester, and  graduated last year.

Despite her royal connections, Stephanie maintained a low-key profile throughout her time at school, and even worked as a barmaid at a local pub.

She completed both the bronze and gold Duke of Edinburgh awards on the scheme, which was founded by her half-sister’s grandfather. 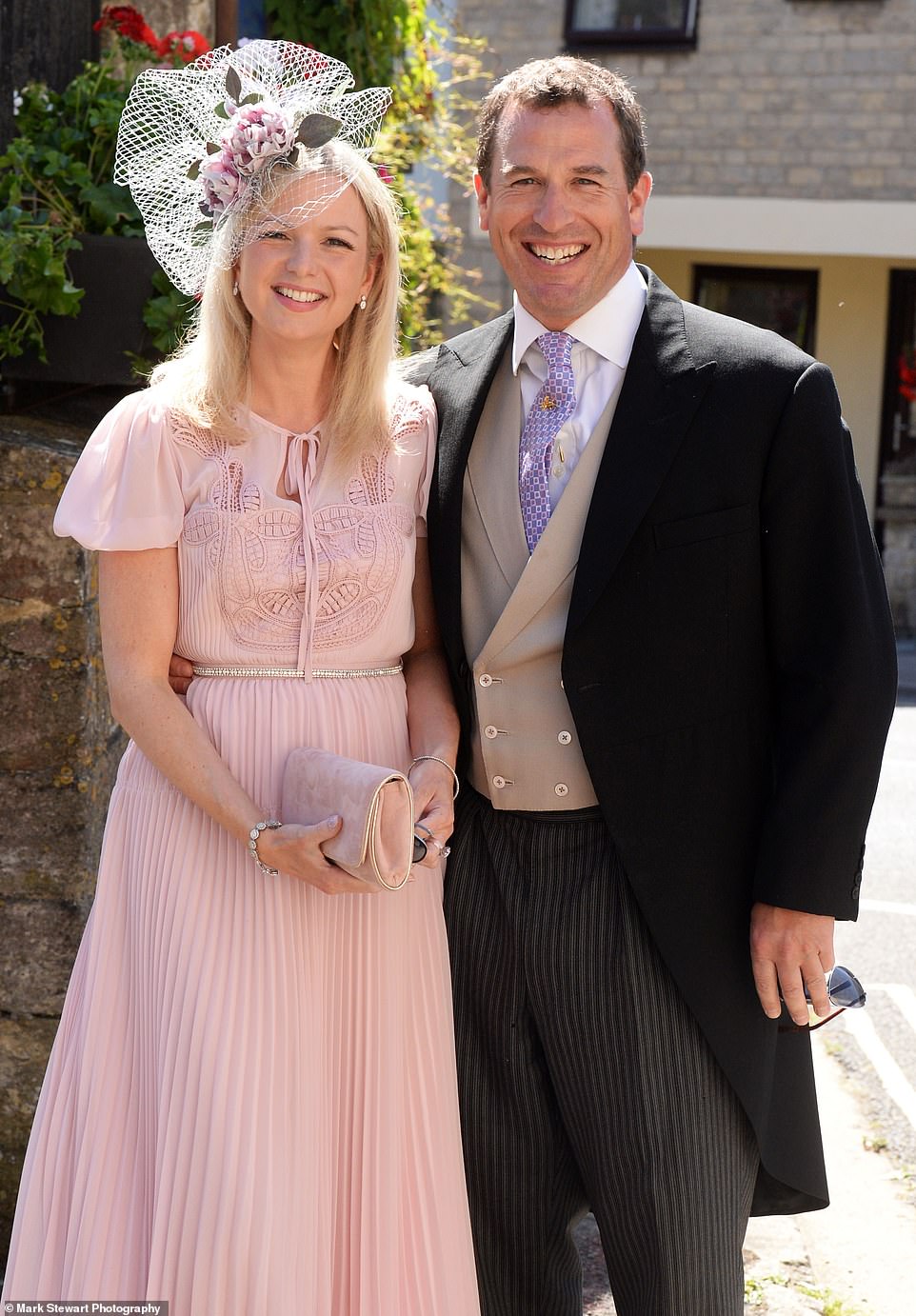 The Worcester-based eventing pro seems close to both of her siblings, enjoying a special relationship with Peter (pictured with his partner Lindsay Wallace), describing him in an Instagram post as ‘the best big brother out there’ 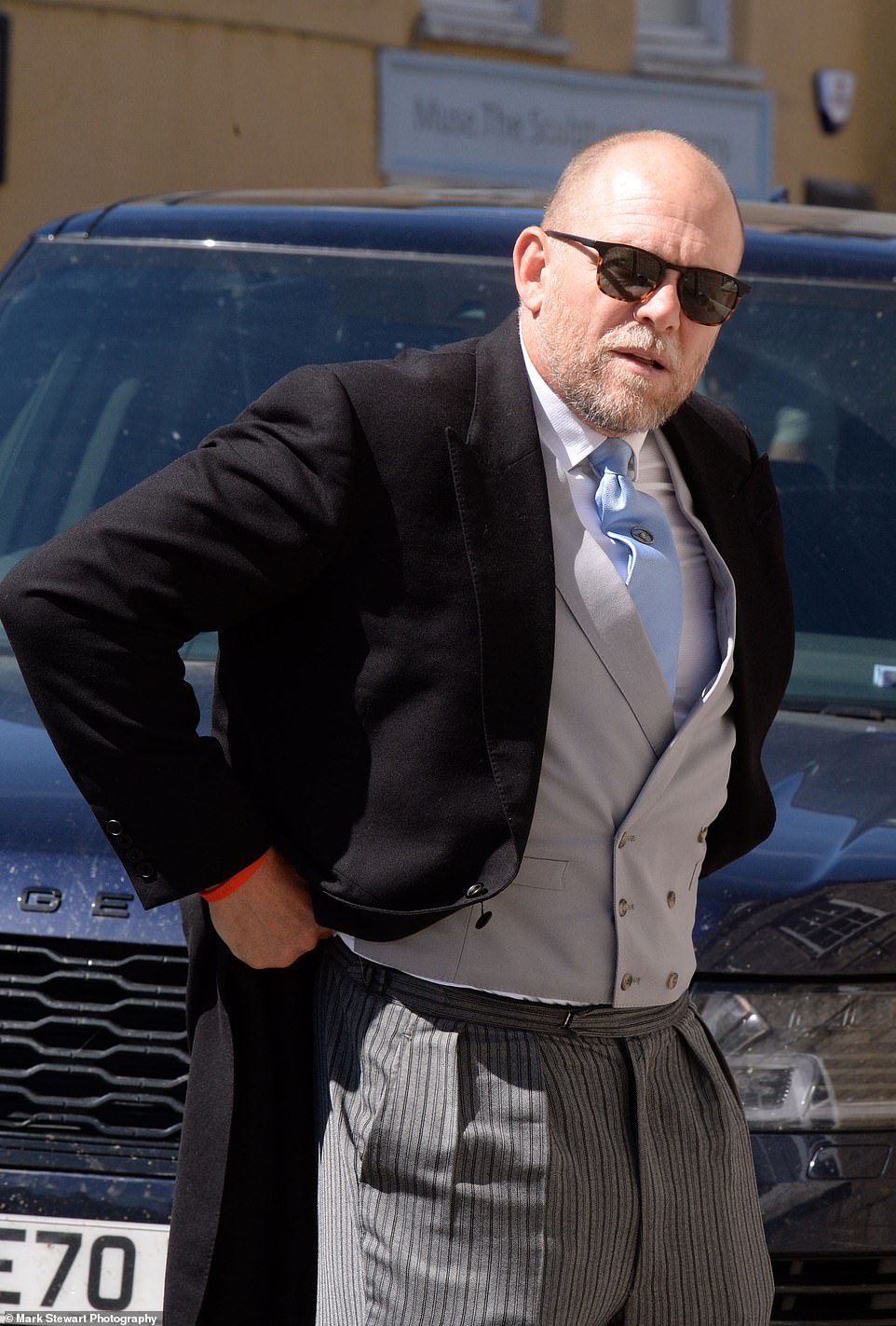 Mike Tindall is a former rugby union player for the England national team. He donned a smart sky-blue tie for the wedding 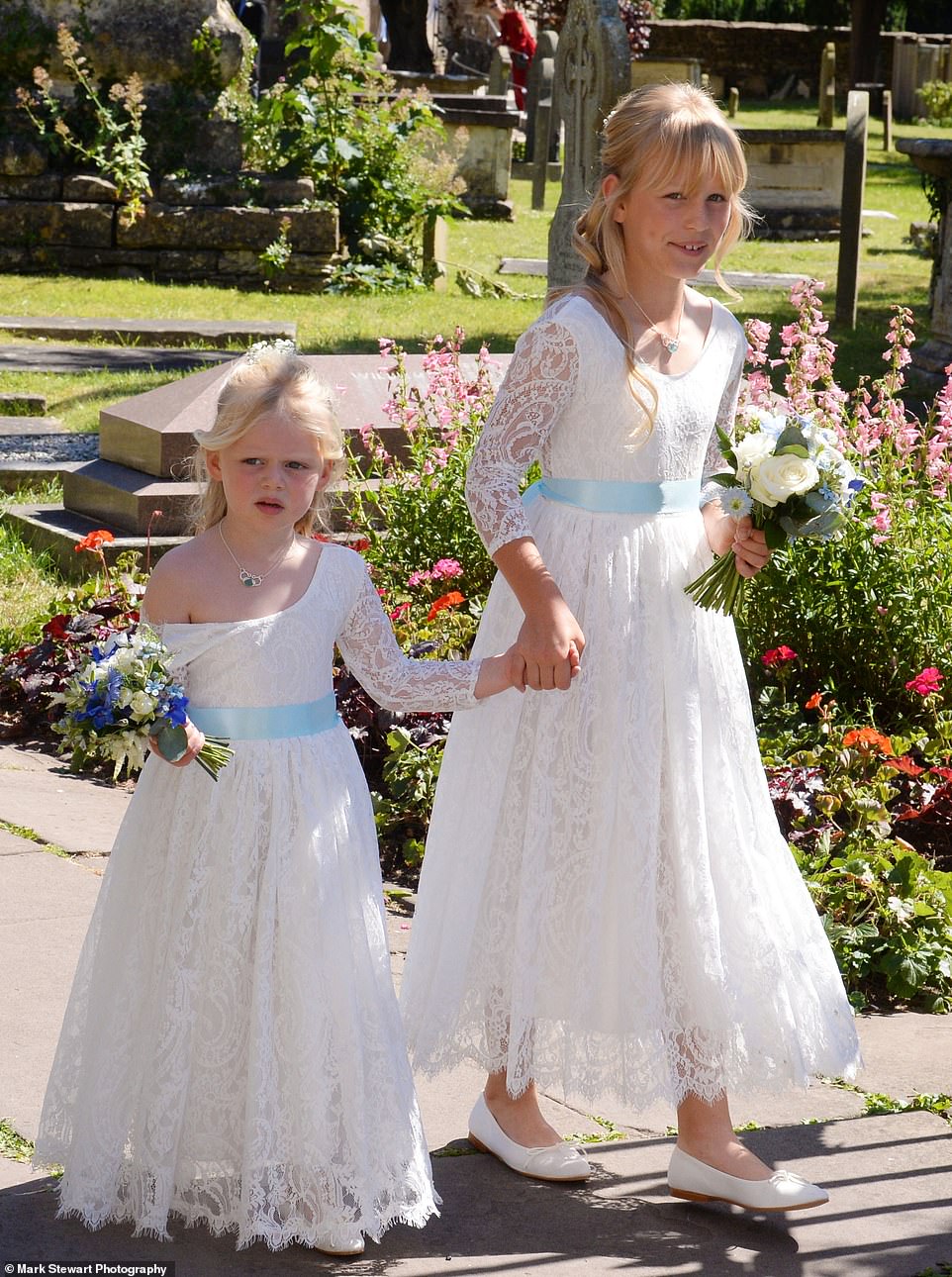 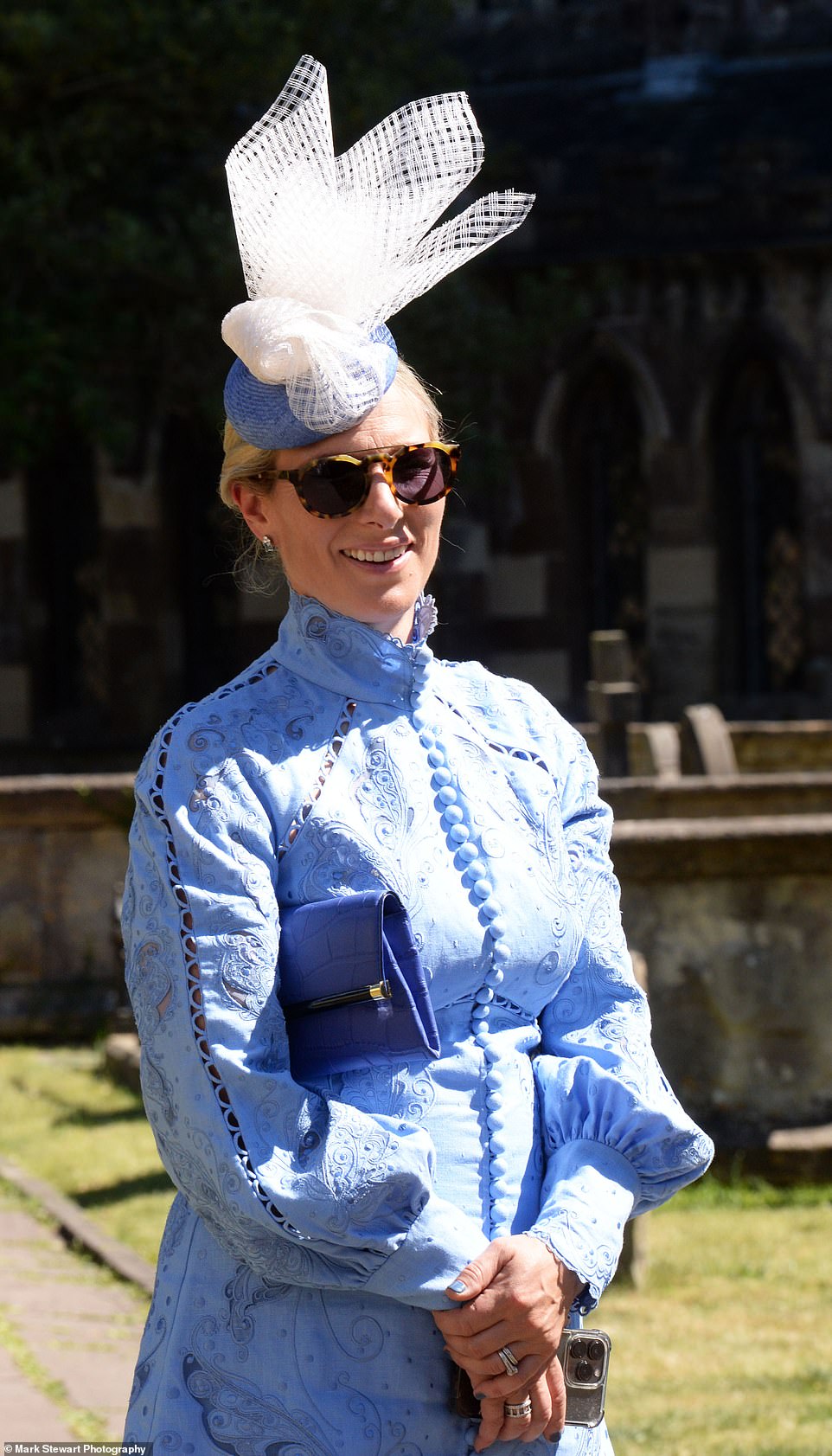 Zara Phillips was all smiles as Britain basked in a record-breaking heatwave as temperatures were set to reach the 30s.

She’s sponsored by Voltaire Design – a saddle maker – and is often seen in trendy equestrian designs.

Meanwhile the 24-year-old is also believed to be a keen skier, having travelled with her boyfriend for a couple’s trip away to Austria in January 2020.

How did Cpt Phillips meet Anne?

Since leaving the military Mark Phillips, pictured competing at the Badminton Horse Trials in 1976, has spent his life in the world of equestrianism.

In 1972, at the age of 23, Captain Phillips was a member of the British three-day event team that won the gold medal at the Munich Olympics. It was at the Games that he met Princess Anne.

The couple got engaged the following year.

As well as Olympics success, Captain Phillips won the Badminton Horse Trials in 1971 and 1972 riding Great Ovation, in 1974 on Colombus, and in 1981 on Lincoln.

After he retired from the Army, he continued to style himself Captain Mark Phillips – which was allowed because junior cavalry officers whose civilian work involves equestrianism may continue to use their rank.

Prior to the Covid-19 pandemic, Stephanie was also a keen traveller, posting snaps from travels across the world including trips to Hawaii, Austalia, New Zealand, Croatia and Slovenia.

While she’s usually based in Worcester, she is believed to have spent lockdown with her boyfriend agricultural graduate William Hosier, whom she has been dating since 2019.

Despite keeping a relatively low profile, the equestrian has been pictured at some royal events, serving a flower girl at both Zara’s 2011 wedding to Mike Tindall and Peter’s 2008 wedding to Autumn Kelly.

In official photos from the day she’s pictured in front of Princess Anne an her second husband Sir Timothy Laurence.

The Worcester-based eventing pro seems close to both of her siblings, enjoying a special relationship with Peter, describing him in an Instagram post as ‘the best big brother out there’.

She also regularly shares snaps of one of her nieces Isla, now nine, posting sweet snaps of her at Pepper Pig world as a toddler.

Before lockdown, she was also regularly seen with her siblings at eventing competitions, including in one sweet snap where she gave her brother-in-law Mike Tindall a piggyback.

In another she’s seen hugging Zara, the picture of sisterly love despite the 17-year age gap.

Stephanie is also close to her father Captain Mark Phillips,  writing in one Facebook post that she ‘loves him loads’.

Stephanie’s now husband is believed to have popped the question on May 9, after which she showed off her dazzling oval sapphire and diamond engagement ring.

Wearing her long blonde locks in a half updo, Stephanie wore a chic cream top and rested her hand on William’s chest in the official portrait which she credited to Quiet Media. According to the company’s Instagram, it’s run by Samuel and Tamy Hosier – most likely relatives of William’s.

In another sweet shot, the couple – both donning Barbour jackets – gaze into each other’s eyes while Stephanie gently cradles William’s chin.

Stephanie’s post racked up 275 likes, with many of her followers rushing to congratulate them. 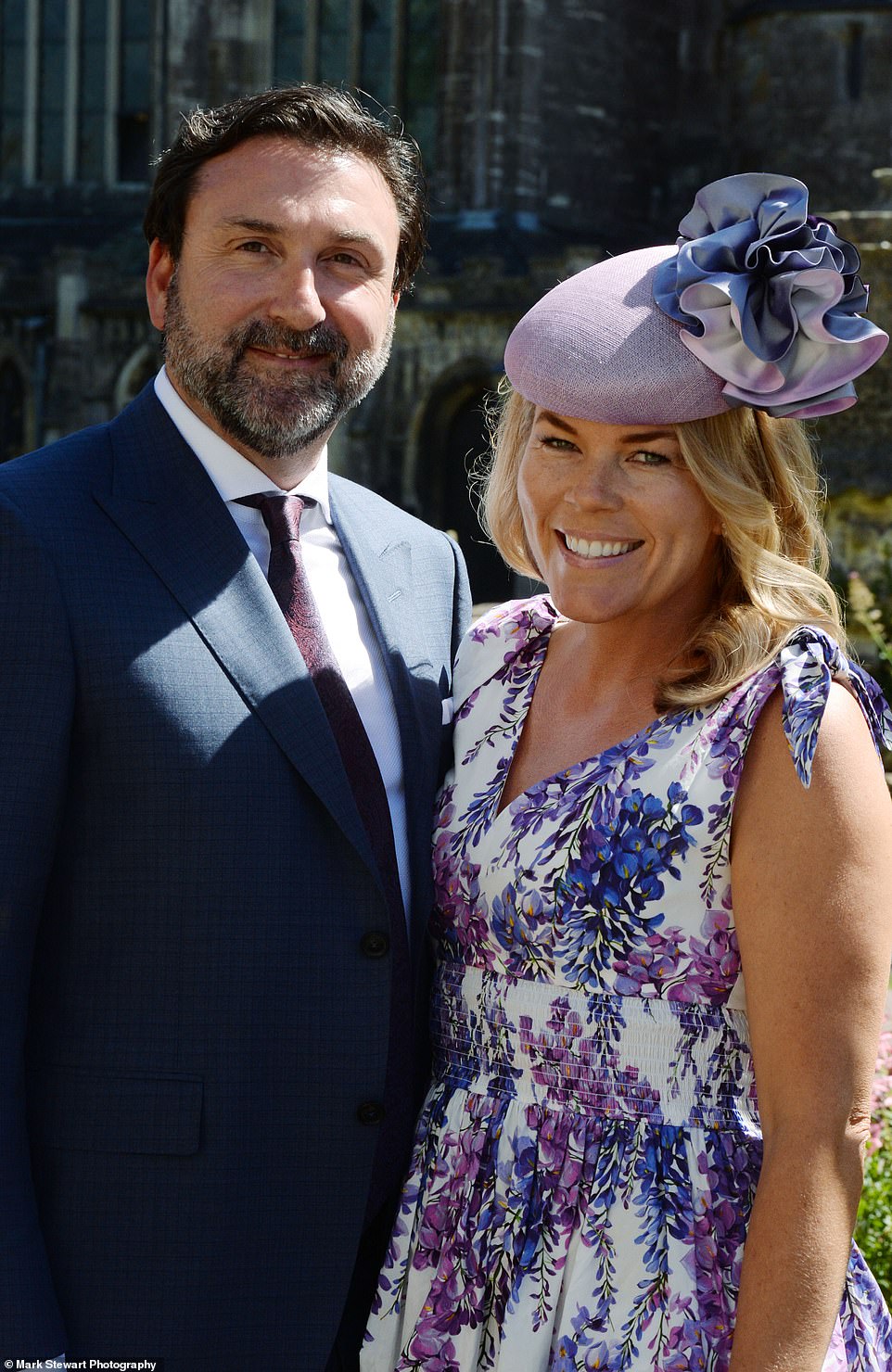