Washington: In recent years, a select few issues have managed to pierce the cavernous partisan divide between Democrats and Republicans in the US Congress.

An increasingly hawkish approach to China on both the left and right stands out as one. So does the bipartisan view that social media giants such as Facebook have amassed far too much power and need to be reined in.

The saving grace for Facebook founder Mark Zuckerberg has been that while Democrats and Republicans both have major gripes about his creation, their animosity is coming from very different places. 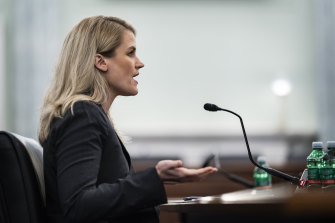 Republicans have been mostly concerned about the alleged suppression of conservative voices. Democrats have been alarmed by the spread of Russian disinformation during the 2016 election campaign and, more recently, scaremongering about COVID-19 vaccines.

As a result, members of Congress have spent a lot of time haranguing tech executives at committee hearings, but have not passed any meaningful legislation to regulate Facebook and other social media entities.

In other words, there’s been lots of talk and little action.

But with whistleblower Frances Haugen’s appearance before the Senate on Wednesday (AEDT) there was a real sense that Republicans and Democrats may finally be capable of coming together to update the nation’s outdated internet regulations.

“I think the time has come for action and you are the catalyst for that action,” said Democratic Senator Amy Klobuchar told Haugen, making clear she thought the day’s hearings were a gamechanger in the debate over tech regulation.

Haugen, a former Facebook product manager, was a compelling and persuasive witness. Importantly, she avoided tech gobbledygook, making her points in language that the senators and regular viewers at home could easily understand.

“The choices being made inside of Facebook are disastrous for our children, for our public safety, for privacy and for our democracy,” she said. “And that is why we must demand Facebook changes.” 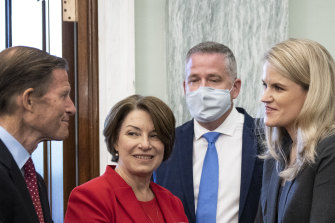 Senator Richard Blumenthal left, and Senator Amy Klobuchar speak with former Facebook employee and whistleblower Frances Haugen as she arrives to testify in the Senate in Washington. Credit:AP

And she backed up her criticism with insights gained from thousands of pages of leaked internal documents.

The most headline grabbing revelation from her trove was that Facebook has turned a blind eye to the way sister site Instagram has worsened body image and mental health issues for some young girls.

As seen with alcohol and cigarettes, politicians from the left and right can agree on the importance of protecting children from harmful products. The focus on social media’s impacts on younger users will embolden those calling for greater government oversight.

Haugen also brought crucial clarity to the debate about how to make platforms like Facebook more accountable without infringing on free speech.

Rather than focusing on how Facebook polices its users’ posts, she emphasised the need to increase transparency about how social media algorithms suggest content to users – elevating some types of content and de-emphasising others.

This echoes the approach the Morrison government, based on recommendations from the Australian Competition and Consumer Commission, has taken in its social media code. The code requires social media companies to provide notice of changes to their algorithmic rankings.

Several senators homed in on this issue, declaring a newfound interest in forcing social media companies to inform policymakers and the public about the algorithms that drive their platforms. 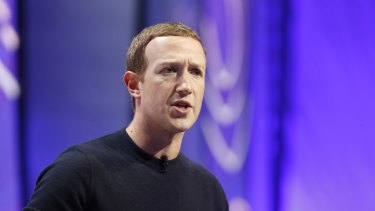 Democratic Senator Richard Blumenthal said there was “always reason for scepticism” about whether Congress can come together to pass legislation. But added that “there are times when the dynamic is so powerful that something actually is done”.

“I have rarely, if ever, seen the kind of unanimity on display today,” he said. Later he described the hearings as a “breakthrough moment” for legislators.

Republican Senator John Thune, a prominent advocate of increased algorithm transparency, told his committee colleagues: “I would simply say, let’s get to work. We’ve got some things we can do here.”

The debate over social media regulation has a long way to go in America, but the sense of momentum is undeniable.