A new miniature species of chameleon where the male is much smaller but has unusually large genitals in order to have sex with the much larger female has been discovered during a recent research expedition in Madagascar.

An international team of researchers, led by the Bavarian State Collection of Zoology (ZSM-SNSB) from the German city of Munich, discovered the bizarre chameleon in the North of Madagascar, East Africa.

The discovery was announced on Thursday and published in the open-access Journal of Scientific Reports. 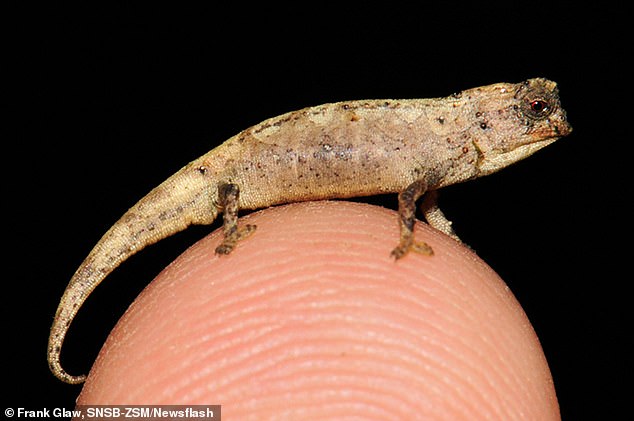 With a body size of just 13.5 mm (0.53 inches), this Nano-Chameleon (Brookesia nana) is the smallest known male of the roughly 11,500 known reptile species (pictured)

When asked about the inspiration behind the name, Frank Glaw, curator of Herpetology at the Bavarian State Collection of Zoology and lead author of the study, told Newsflash: ‘The inspiration was, of course, the smallness of the species.

‘The first species of these mini chameleons was discovered as early as 1893 and named Brookesia minima, which means ‘the smallest’.

‘In 2012 we discovered the even smaller species Brookesia micra, which is also named for its tiny size. And in this tradition, we also named Brookesia nana, which can be translated as ‘dwarf’.’

The females, on the other hand, are 19 millimetres (0.74 inches) larger than males.

A comparison of the genital size of the Nano-Chameleon and 51 other chameleon species from Madagascar suggested that male Brookesia nana adults have extremely large genitals.

Mr Glow said according to the studies, the smallest chameleons tend to have the largest genitalia relative to body size. For instance, the size of Brookesia nana’s manhood is up to 18.5 percent of its body size.

Researchers said this may be due to a phenomenon called ‘sexual size dimorphism’, which occurs in species where males tend to be smaller than the females, meaning relatively larger genitals are required for successful reproduction. 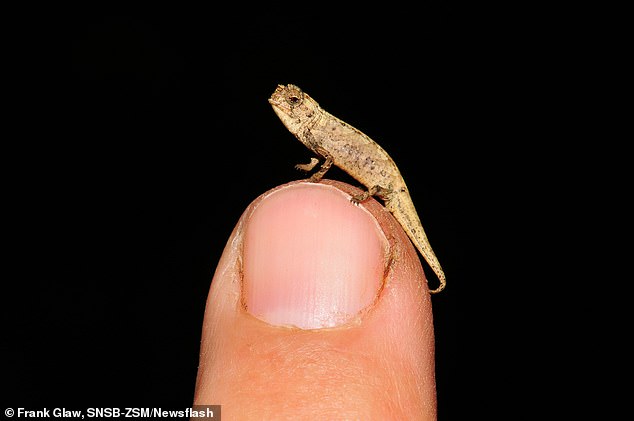 According to the studies, the smallest chameleons tend to have the largest genitalia relative to body size. For instance, the size of Brookesia nana’s manhood is up to 18.5 percent of its body

The distribution ranges of most dwarf chameleons such as Brookesia nana are very small, sometimes encompassing areas of just a few hectares.

When asked if the tiny chameleons were returned to their natural habitat, Mr Glow said: ‘The two animals (a male and a female) were taken for research purposes. The male has become the holotype for describing the species, the female the paratype.

‘Such documents, so-called type copies, are required to scientifically describe and name a species. One copy is kept in Munich, the other at the University of Antananarivo in Madagascar.’

Oliver Hawlitschek, from the Natural History Centre in Hamburg, said that even though the habitat of the Brookesia nana is facing deforestation, the recent decision to designate that exact territory as protected will hopefully help the tiny chameleon survive.