Channel 4 to air Volodymyr Zelensky comedy 'Servant Of The People'

A documentary charting the rise of Ukraine’s president Volodymyr Zelensky from comedian and actor to a wartime leader will air on Channel 4 this weekend.

The 30-minute current affairs special, titled Zelenskyy: The Man Who Took On Putin, will explore his beliefs, policies and the man behind a series of social media and TV appearances which have rallied his nation in the fight against Russia.

A satirical Ukrainian TV series, Servant Of The People, will also be shown after the documentary. It stars Mr Zelensky from his time as an actor and is a poignant precursor to his real-life election victory.

Mr Zelensky, 44, has become known around the world as a key figure in his country’s response to the invasion by Russia, but before his election to the presidency in 2019 he was better known in the entertainment world as a TV satirist and comedian. 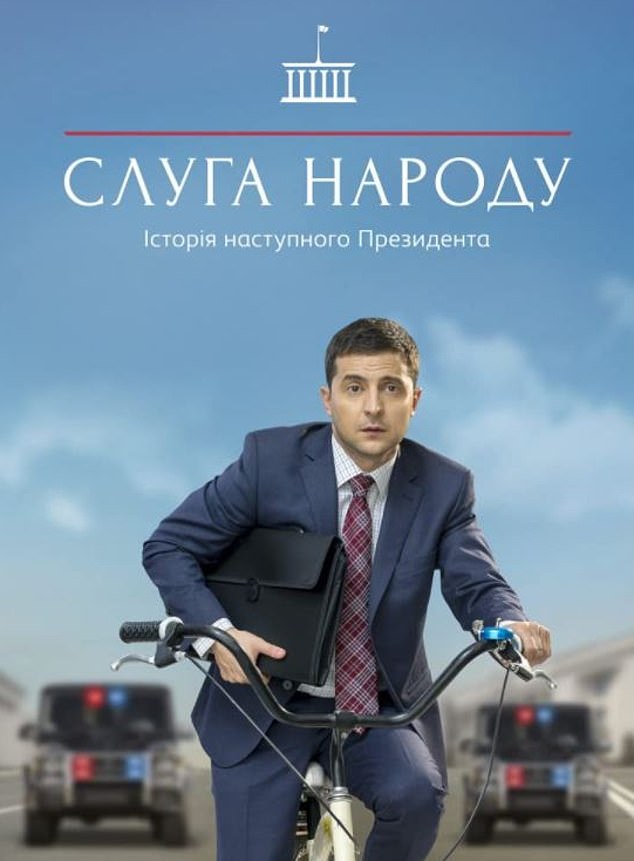 Servant Of The People, a satirical comedy in which Volodymyr Zelensky accidentally becomes President of Ukraine, will be broadcast alongside a documentary charting his rise to power

He also created the production company Kvartal 95, which produced Servant Of The People, in which he played a high school teacher who accidentally becomes president after a video of him condemning government corruption goes viral on social media.

His students then launch a crowdfunding campaign for his candidacy in Ukraine’s presidential race against his wishes, and eventually propel him to political victory.

The programme began airing in 2015 on Ukrainian channel 1+1 and became hugely popular, racking up three series and a feature film.

After the show was a hit with the Ukrainian public, Mr Zelensky ran for and won a large majority in the 2019 presidential election. 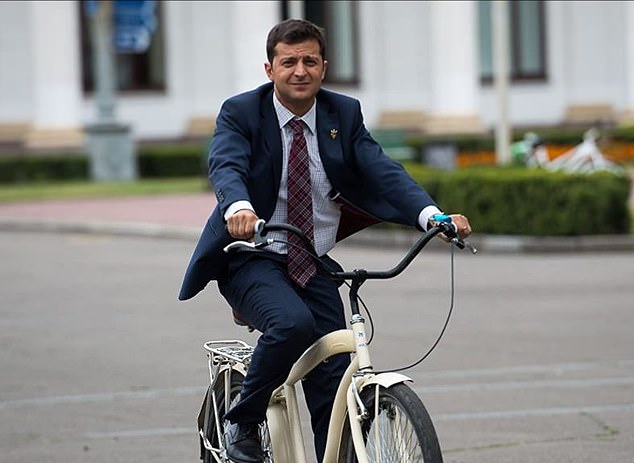 Mr Zelensky, 44, has become known around the world as a key figure in his country’s response to the invasion by Russia, but before his election to the presidency in 2019 he was better known in the entertainment world as a TV satirist and comedian 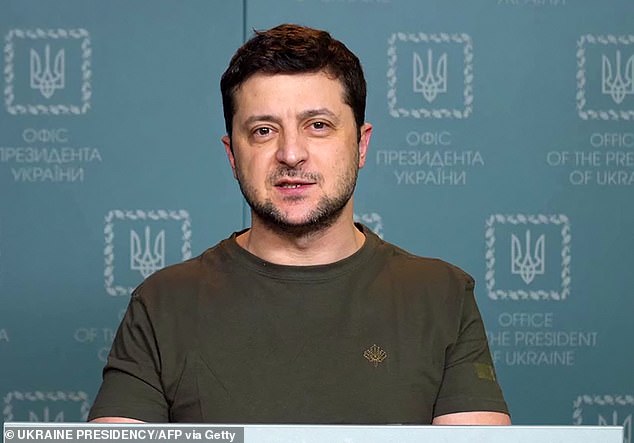 He also provided the voice of Paddington Bear in the Ukrainian dubbing of the 2014 and 2017 films, and won the country’s version of Dancing With The Stars in 2006.

Ian Katz, Channel 4’s chief content officer, said: ‘We know from the huge audiences coming to our comprehensive news coverage of the war in Ukraine that our viewers have a real thirst to understand the conflict and the individuals who are shaping it.

‘In the space of a few weeks, Volodymyr Zelensky has become one of the most admired and speculated about men in the world, and broadcasting our current affairs special, Zelenskyy: The Man Who Took On Putin, and Servant Of The People across Sunday night will give viewers access to deep insight into how he shot to political prominence, the foundations of his popular appeal and his intuitive grasp of how to exploit both traditional and social media.

‘The battle in Ukraine is as much an information war as a military one and these two programmes will show that Zelensky was a formidable information warrior long before he was a war leader.’

Zelensky: The Man Who Took On Putin will air on Channel 4 at 6.45pm on Sunday, followed by three episodes of Servant Of The People at 10.35pm.

Series one and two of Servant Of The People will be available in full on All 4 at a later date.

Volodymyr Zelensky: His journey from comedian and actor to Ukrainian war hero

Volodymyr Zelensky has become an unlikely hero across the world for bravely facing off against Vladimir Putin’s all-out invasion.

Ukraine’s president has been applauded for his bravery in staying in Kyiv to help his forces bash back waves of Russian attacks.

And the 44-year-old has won a legion of fans for his good looks as the public swooned over his video addresses to foreign powers.

But just five years ago, the world’s most talked out leader was just an actor and comedian (with a law degree) who had a voiceover credit for Paddington and a stint on Ukraine’s version of Dancing with the Stars. 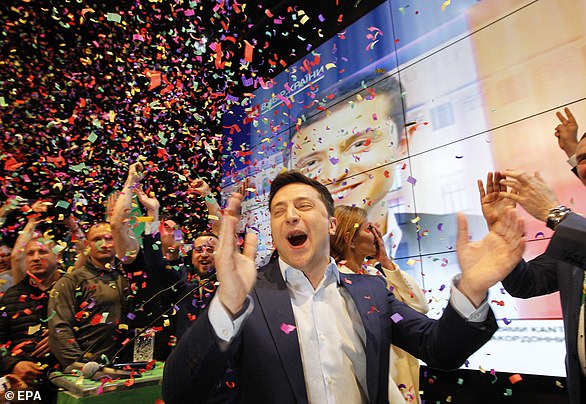 Now rather than playing a small animated Peruvian bear on the silver screen – he finds himself standing up to the invading Russian Bear in real life.

Zelensky was born in Kryvyi Rih, a large city in central Ukraine, to Jewish parents before they moved to Erdenet in Mongolian for four years.

He was expecting to move to Israel to study after passing his exams, but his father refused to let him go, instead sending him to study law at Kryvyi Rih Institute of Economics. 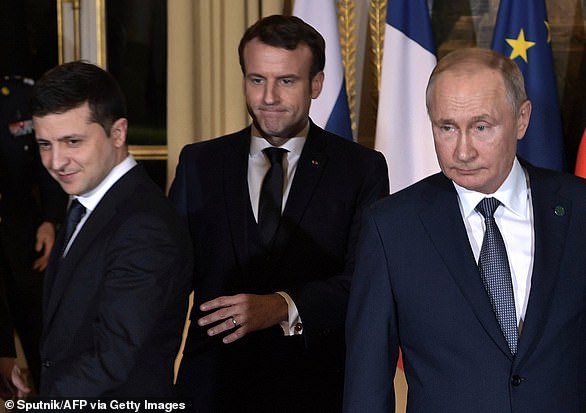 By this point married to screenwriter Olena Zelenska, with whom he has two children, he moved into film and television and starred in Love in the Big City, the sequels and Office Romance. Our Time.

But he began showing an interest in politics from 2014 when the Ukrainian Ministry of Culture suggested it would ban Russian artists from the country.

In 2015 he played the president of the country in the TV series Servant of the People, which also railed against corruption in the leadership.

Zelensky took power for real in 2019 after winning a landslide victory against Petro Poroshenko, who is now embroiled in a series of scandals from his time in office. 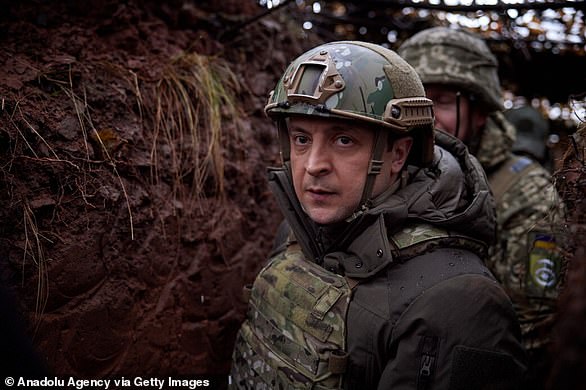 Zelensky visits the front-line positions of Ukrainian military in Donbass, Ukraine in December 2021

Like his character, he ran on an anti-corruption campaign and trounced the pro-Russia incumbent by taking 73 percent of votes.

Poroshenko lost to the television star across all regions of the country, including in the west where he traditionally enjoyed strong support.

It was an extraordinary outcome to a campaign that started as a joke but struck a chord with voters frustrated by poverty, corruption and a five-year war.

At his campaign HQ, as the exit polls came out, Zelensky said: ‘I will never let you down. While I am not formally president yet, as a citizen of Ukraine I can tell all post-Soviet countries: ‘Look at us! Everything is possible!’