A global expert in tracking coronavirus transmission among children has called for an end to Victoria’s blanket school closures during lockdowns, as has the principal of one of the schools caught up in the recent outbreak.

Australian infectious diseases paediatrician Robert Booy warned that Victoria was sacrificing the health of children for the sake of the elderly by keeping schools closed. 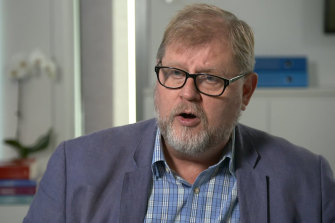 “Children have suffered enormously from lockdown – their mental health, their education, their socialisation,” he said. “And it’s been all done for the benefit of the old, of the adults and elderly.”

Premier Daniel Andrews said on Sunday that he wanted to have students back at schools but could not definitively say that this would happen on Wednesday, when at least some lockdown restrictions are expected to have been eased.

But the question of whether, during COVID-19 outbreaks, the benefit of continuing to close all schools outweighs the damage caused to students and families remains contentious among health experts and school leaders.

Professor Fiona Russell, director of child and adolescent health at the University of Melbourne, has in the past called for an alternative to blanket closures, using a traffic-light system.

This week she recanted her previous position that schools should be kept open whenever possible, describing the more infectious Delta variant of the virus as a game-changer.

“It’s becoming a lot more complex now,” she said. “Delta is quite different. It’s a more transmissible variant. Household attack rates can be pretty high and also the incubation period is shorter, so it’s moving so much quicker.”

Professor Russell also noted there had been a worrying surge in hospital admissions in young people with Delta in the UK, but said this rise might be partially attributable to how transmissible Delta is, rather than an increase in virulence.

Students in Victoria have already missed up to 126 days of face-to-face learning since March last year.

Last week, some leaders in the education sector called for greater consistency in remote learning across the state, arguing disparity in the way education is being delivered is disadvantaging students.

When Victoria went into lockdown on July 16, schools were closed to all but the children of essential workers and vulnerable children. Last week the Andrews government relaxed its settings so that students with a disability could attend school.

Professor Booy, the chair of the Immunisation Coalition Scientific Advisory Committee, recently led a major metadata analysis that examined 32 studies comprising 19 schools and more than 40,000 children worldwide who had been exposed to coronavirus.

The research found the risk of an infected child passing on the disease to an adult was about 40 per cent lower than an adult transmitting it to another adult. However, Professor Booy stressed that some outbreaks examined involved less transmissible strains than the Delta variant.

Children were also far less likely to become seriously ill, while older teenagers in high school had a slightly elevated risk of being infected and going on to transmit coronavirus than children aged under 10.

“Schools have never been the engine of this pandemic,” he said. “The engine is in the community, in households, in workplaces; it is not transmission in schools.”

He said while the risk of an outbreak at a school was inevitable, the threat could be curtailed by simple measures: limiting movement of students by keeping all their classes in the same room, while teachers wore face masks and practised social distancing when moving around.

Other mitigation strategies could include staggering lunch breaks to reduce mingling in corridors, changing timetables and improving ventilation in all school buildings.

Andrew Neal is principal of Bacchus Marsh Grammar, whose staff and student body of more than 3000 people was forced into 14-day isolation after a teacher tested positive to COVID-19 on July 14.

Seven more members of the school community including teachers and students have since tested positive, while a teacher’s child, who attends Barwon Heads Primary, was also infected. 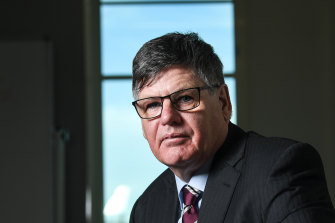 Yet the non-government-school principal said he was wary of a containment approach that has forced every school in the state to return to a fifth period of remote learning.

“We can’t keep locking schools down,” Mr Neal said. “We’ve got to get a much more refined view of what we are doing so that we are not impacting all of these kids’ learning.”

Mr Neal said that despite the best efforts of teachers it was clear that students were feeling more deflated with each lockdown and that their education was suffering.

“As we have throughout this pandemic, we’re following the advice of the Chief Health Officer on schools operating during lockdown and we’re incredibly grateful for the outstanding efforts of Victorian schools and staff in pivoting back to remote learning so seamlessly,” Mr Merlino said.

The government has invested $250 million in a small-group tutoring program to help students who fell behind last year. More than 6000 tutors have signed up.

Jordana Hunter, education program director at think tank the Grattan Institute, said the government should consider refining its settings further in the event of future lockdowns.

“Given where we’re at with vaccination rates across the country, it looks like the risk of school closures in some form or other will be a reality for at least the next six months as we manage outbreaks,” she said.

“I would really like to see opportunities where preps, grade ones and twos could stay at school … because what we are hearing is that students in those younger year levels really struggle with their learning at home and the challenges for parents supporting those younger students are a lot harder.”

A UNESCO report published this month on school closures suggests Victorian students have spent more time out of the classroom since the pandemic started than most other students in the world.

The survey, based on information from 143 countries’ education departments, found schools were closed for an average of 79 instructional days last year.

The Grattan Institute has estimated that during Victoria’s first phase of remote learning in term 2 last year, disadvantaged students fell one month behind their more advantaged peers.

Ms Hunter said the release of NAPLAN results in August would provide the first opportunity to analyse how far Victorian students went backwards in 2020.

Laureate professor Jenny Gore, director of the Teachers and Teaching Resource Centre at the University of Newcastle, led one of the few direct comparative studies that has been published on the learning impact of COVID-19 on Australian students.

Her study of year three and four students in NSW, who missed roughly eight weeks of face-to-face learning early last year, found a mixed picture. Results from terms one and four in 2019 were compared with term one in 2020.

Principals and teachers surveyed for the study reported a similarly mixed effect on student wellbeing.

“Some kids did really well at home, being away from the bullies or the anxiety they carry to school every day, but for lots of kids it was a huge relief to go back to school and to see their friends again and have that really important human contact,” Professor Gore said.

Meredith Peace, president of the Victorian Branch of the Australian Education Union, said any decision on reopening schools had to take into consideration the health and safety of staff, as well as students.

“Even with the best intent, the best measures, we can’t socially distance in schools,” Ms Peace said.

“People rightly are nervous about returning to a workplace where we can’t do some of the things that we’re asked to do in the broader community.” 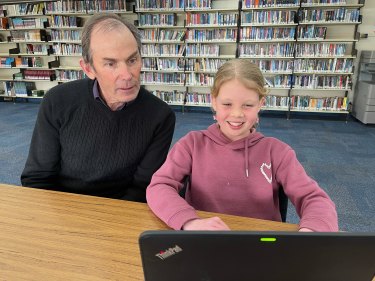 Robert Boucher is principal at Swifts Creek P-12 School in East Gippsland, one of the state’s most remote schools. Despite his school’s geographically remote location and lack of COVID-19 cases in the local government area, Mr Boucher said he accepted the blanket lockdown across the regions.

“We know that as special as we are, we’re part of a system and so we don’t have that opportunity of saying we won’t follow the rules. That’s not helpful to anyone.”

Mr Boucher said it was clear that being away from face-to-face learning would affect his students, but parents, staff, and students had all been adaptable.

“That’s what we’ve got to do because that’s the only way we’re going to get out of this,” he said.