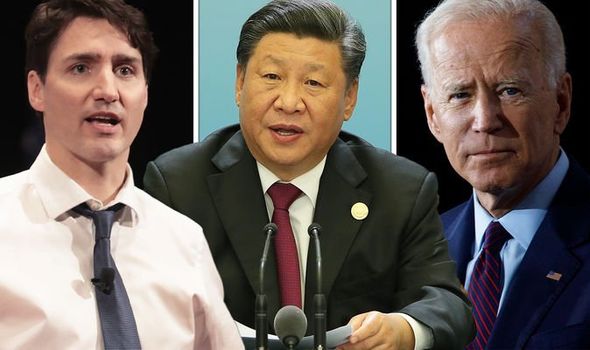 China’s People’s Liberation Army’s Eastern Theatre Command blasted the US and Canada for colluding to provoke trouble amid the rising tensions over Taiwan. China reiterated its position that Taiwan is part of Chinese territory.

“Taiwan is part of Chinese territory.

“Theatre forces always maintain a high level of alert and resolutely counter all threats and provocations.”

This comes as the Chinese military condemned the US and Canada for sending a warship through the Taiwan Strait last week.

The US military said the Arleigh Burke-class guided missile destroyer USS Dewey sailed through the narrow waterway along with the Canadian frigate HMCS Winnipeg.

It added: “Dewey’s and Winnipeg’s transit through the Taiwan Strait demonstrates the commitment of the United States and our allies and partners to a free and open Indo-Pacific.”

US Navy Ships have been sailing throuhg the strait roughly monthly, angering Beijing.

This comes amid an potential conflict between Taiwan and China.

Taiwan has long been a tense subject for China since a separate government was established on the island following the Chinese Civil War in 1949.

The nation remains an important ally of Western countries.

Fears have erupted over recent months that, under Chinese President Xi Jinping, Beijing will use military force to reunify Taiwan with mainland China.

This month, Xi Jinping’s nation warned “war may be triggered at any time” and asked Taiwan’s democratic allies if they want to “become cannon fodder”.

Last week, US President Joe Biden said he had spoken to his Chinese counterpart, Xi Jinping, about the island and they agreed to abide by the “Taiwan agreement”.

Taiwan’s Foreign Ministry said it had sought clarification from the US about Mr Biden’s comments.

The US reassured their policy towards Taiwan had not changed and the US commitment with them was “rock solid”.