Christmas holidays for MPs will be EXTENDED by an extra day

Alright for some! Commons Leader Jacob Rees-Mogg announces the Christmas holidays for MPs will be EXTENDED by an extra day

MPs will get an extra day off over the forthcoming Christmas holidays, Jacob Rees-Mogg announced today.

The House of Commons had been expected to break for the festive period on December 16 before returning on January 4.

But Mr Rees-Mogg revealed this morning that MPs will now not have to return to work in Westminster until January 5. 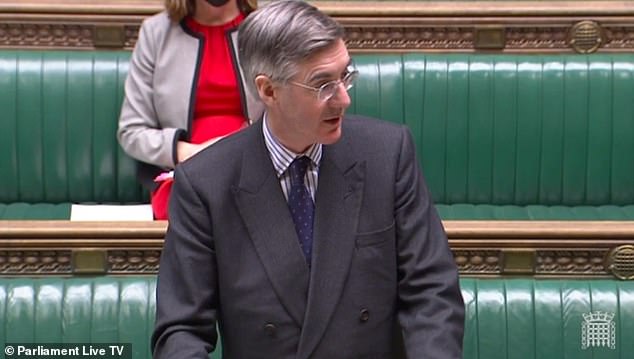 MPs will get an extra day off over the forthcoming Christmas holidays, Jacob Rees-Mogg announced today

Mr Rees-Mogg made the announcement as he delivered his weekly business statement to the Commons.

He told them: ‘Honourable and right honourable members may also wish to know that subject to the progress of business, the House will return from the Christmas recess on Wednesday January 5.’

The Cabinet minister then went on to outline the holidays MPs will get in the first half of next year.

‘The House will rise for the February recess on Thursday February 10 and return on Monday February 21,’ he said.

‘The House will rise for the Easter recess on Thursday March 31 and return on Tuesday April 19.

‘The House will rise for the May Day bank holiday on Thursday April 28 and return on Tuesday May 3.

‘The House will rise for the Whitsun recess on Thursday May 26 and return on June 6.

‘And, finally, the House will rise for the summer recess on Thursday July 21.’

Mr Rees-Mogg did not give an end date for the planned summer recess although it is expected MPs will return for a period in September in line with previous years.