CHRISTOPHER STEVENS pays tribute to the man who popularised Sudoku

Number’s up for the genius behind our national grid obsession: As Japanese Sudoku guru dies at 69, CHRISTOPHER STEVENS pays tribute to the man who popularised the infuriatingly addictive puzzle

Sudoku, the fiendish numbers puzzle that taxes the brains of millions daily, might never have caught on if it hadn’t been for a horse race.

Maki Kaji, the publisher who turned the logic-based puzzle into a world-beater, wanted to call it Suji-wa-Dokushin-ni-Kagiru, which in Japanese means ‘Numbers should be single, like a bachelor’.

But in 1984, just as his puzzles magazine was about to go to press with the first examples of it, members of his editorial staff expressed reservations about the name. It was, they suggested diffidently, perhaps just a little . . . long-winded.

Mr Kaji, who has died aged 69, solved the problem in less time than a seasoned puzzler completes an extra-easy grid: ‘I wanted to go to watch the racing that day, so I created the name in about 25 seconds.’

He took the letters Su, meaning numbers, and Doku, meaning unmarried, put them together, and then left for the racetrack. 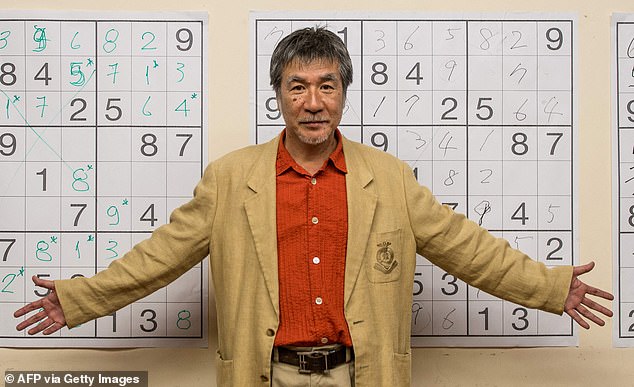 Gift to the world: Maki Kaji (pictured at the first Sudoku national competition in Sao Paulo in 2012), the publisher who turned the logic-based puzzle into a world-beater, has died aged 69

‘I was already married at that time,’ the charming Mr Kaji told an audience at the 2008 U.S. Sudoku Championships.

‘Please understand I did not come up with “numbers should be single” because I wanted to be single again. I enjoy a glass of wine with my wife every night and I enjoy horse racing every weekend. I am very much satisfied with the way I am.’

The history of Sudoku — which in its classic form involves placing the numbers 1 to 9 in each row, column and square of a 9 by 9 grid — is complicated, and Mr Kaji, whose business card described him as the ‘Father of Sudoku’, never claimed to be its inventor.

A version is believed to have originated in China or India in 900AD. By the 18th century, Swiss mathematician Leonhard Euler had devised a puzzle with a grid in which numbers appeared only once in each row and column.

In the late 1970s, architect and former U.S. Army captain, Howard Garns, came up with a similar puzzle. He sent it to Dell Pencil Puzzles And Word Games magazine where it was first printed in 1979, titled Number Place.

And that’s where Mr Kaji saw it, while in the U.S. on a train in the 1980s. He didn’t know enough English to understand the instructions — but, to his delight, he realised he didn’t need to. 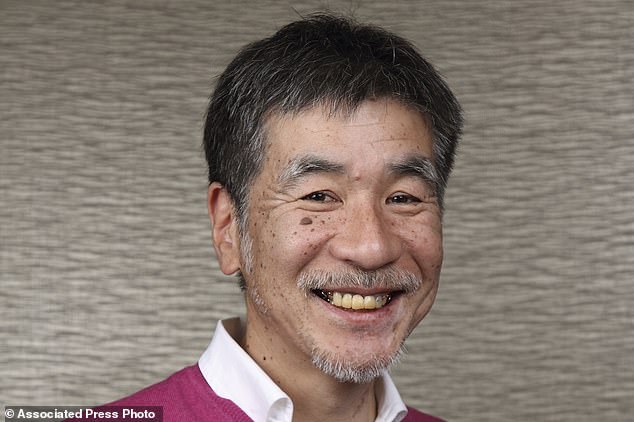 Mr Kaji (pictured above), whose business card described him as the ‘Father of Sudoku’, never claimed to be the puzzle’s inventor 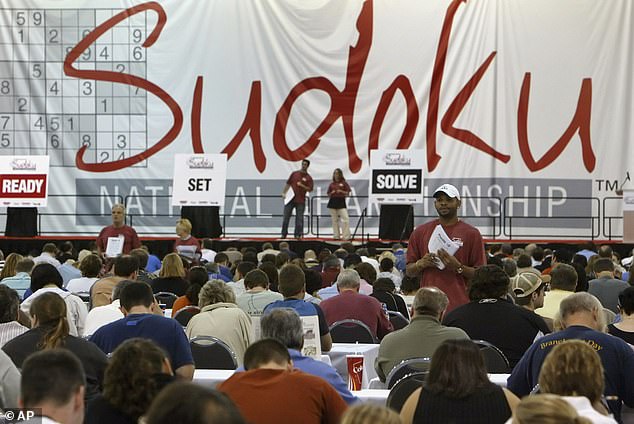 A tournament official, wearing a white hat, watches for participants to complete their puzzles during the Sudoku Tournament in Philadelphia in 2007 (file photo)

A chain-smoking university drop-out, Mr Kaji was running Japan’s first puzzle magazine which he had launched from a tiny Tokyo office with two friends.

He called it Nikoli after his favourite horse, the 1980 Irish 2,000 Guineas winner, and ran it ‘like a home-made cake shop’ where everyone went home at 3pm.

‘When we started, word and number problems were not particularly popular,’ he once said.

‘Quizzes were considered more entertaining. Puzzles, many said, were just too difficult. I have enjoyed dispelling those notions.’ 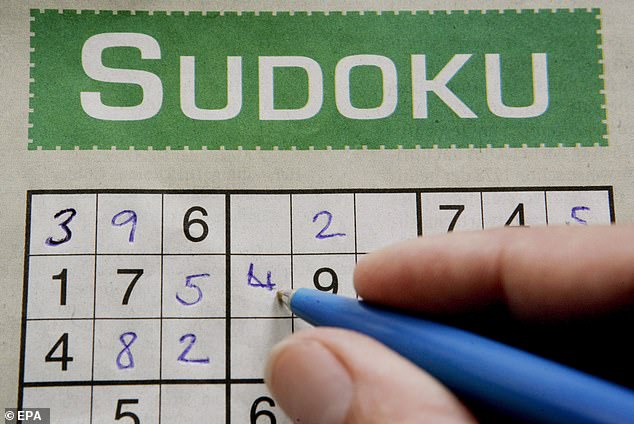 By the 18th century, Swiss mathematician Leonhard Euler had devised a puzzle with a grid in which numbers appeared only once in each row and column (file photo)

The magazine was a gamble. Crosswords have never been popular in Japan because of its complex alphabet and language.

‘In Japanese there are many words that sound the same but have totally different meanings,’ Mr Kaji explained.

‘The fact that Sudoku can have only one answer is very reassuring. We Japanese like mental arithmetic.’

How puzzle craze swept the world

Mr Kaji was determined to produce a Japanese version of Number Place and so, with a few refinements, Nikoli published its first Sudokus.

They proved popular rather than sensational, and readers liked to send in their own versions. It was nearly 20 years before Sudoku rocketed to global success.

That was due to a retired New Zealand judge called Wayne Gould, who picked up a Sudoku puzzle in Hong Kong and liked it so much he wrote a computer program to create new grids.

In 2003, while in London, he persuaded The Times newspaper to try the puzzle on its readers. The reaction was instantaneous. Sudoku displaced the crossword as the testing game everyone wanted to play at the breakfast table or on the morning commute.

Judge Gould later admitted. ‘I have become good but my wife [Gaye, a professor of linguistics] does them in about half the time.

‘I’m surprised and amazed at how popular it has become and I can’t really explain it.’

The Sudoku craze did not make Mr Kaji rich. He took the deliberate decision not to patent the puzzle worldwide, reasoning that he would rather everyone enjoyed it than risk limiting its spread.

He and his staff were staggered by the avalanche of international interest in it.

They received tens of thousands of emails — though were unable to read or reply to most, as few were in Japanese.

But one message from a Sudoku fan in her 40s did leave an impression. Mr Kaji said: ‘She was nursing her ailing mother and her only escape from reality was when she worked out a Sudoku puzzle for 15 minutes before going to sleep.

‘After reading this, I made up my mind not to market Sudoku with gimmicks, such as calling it “brain training” or “senility prevention”. I just wanted people to enjoy it.’

Mr Kaji kept searching for a successor to Sudoku. ‘We do it for the love of games, not for the money,’ he said, adding that he looked for puzzles ‘with humour and pathos… that make you throw up your hands and cry, “I can’t do this!” ’

Other logic puzzles he made popular in Japan include Masyu, a join-the-dots grid, and Slitherlink, a zig-zagging number game. But they never equalled Sudoku.

‘The problem is,’ he said, ‘something like Sudoku only comes along once every 100 years.’