Civil servant, 34, nearly dies after drinking five litres of water A DAY in mistaken belief it could cure Covid symptoms

A civil servant nearly died after drinking five litres of water a day in the mistaken belief that it could cure his coronavirus symptoms.

Luke Williamson, 34, from Patchway, Bristol, flushed almost all the natural sodium from his body by taking on too much fluid, and it nearly proved fatal.

He thought he was suffering from Covid-19 during the first lockdown so began drinking double the recommended daily amount of water.

But the increased volume caused water intoxication, meaning his body’s salt levels became dangerously low, leading to a collapse in the bathroom.

While the NHS advises those who test positive for Covid to drink plenty of water to avoid dehydration, this method is not an effective way to help prevent the virus. 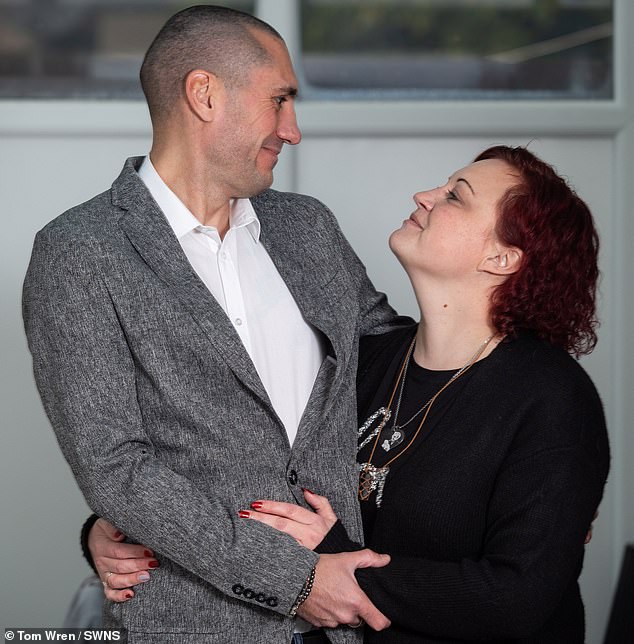 Luke Williamson (pictured with his wife Laura), 34, from Patchway, Bristol, flushed almost all the natural sodium from his body by taking on too much fluid – and it nearly proved fatal

Luke believes it was the quick reactions of his wife Laura, 39, that saved his life during the incident at their home.

She talked to him through the bathroom door to keep him conscious until paramedics arrived.

Mr Williamson said: ‘If it wasn’t for her, I wouldn’t be here. She stayed calm and called the ambulance, and sat on the floor with me behind the door.’

Laura added: ‘He had been very poorly for a week and advised to drink plenty of fluids.

‘He went up to have a bath one night and, the next thing you know, there was a huge bang. He had got out and collapsed.

‘The hospital reckon he had a fit. This was down to his salt levels being flushed out by drinking too much water. That’s what caused it.

‘I went upstairs but couldn’t get in [to the bathroom]. I couldn’t get a neighbour round either because it was lockdown.

‘I called an ambulance. It was 45 minutes [before it arrived]. Luke was completely unresponsive for the last 20 minutes.’

She added: ‘I was really worried I had lost him.’

Laura said paramedics arrived and took Luke to Southmead Hospital – where she was told it was touch and go. 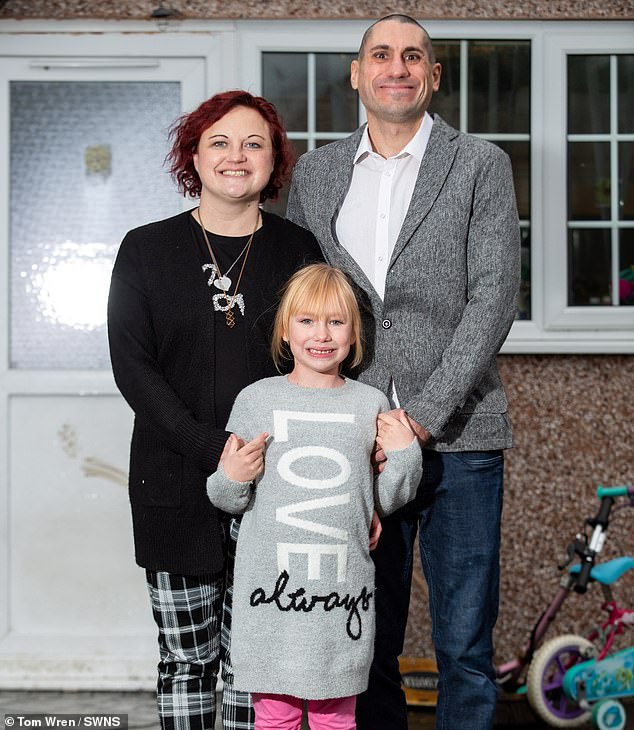 Mr Williamson pictured with his wife and their six-year-old daughter, Ava. He is now on his way back to full health and starts work again full-time in the coming months

What is water intoxication?

Water intoxication, also referred to as overhydration, is caused by drinking too much water.

The increased volume can lead to the amount of salt and other electrolytes in your body becoming too diluted.

Early symptoms include nausea and vomiting, headache, confusion and disorientation.

Increased water intake, when you drink more water than can be removed by the kidneys, and retaining water, when the body cannot get rid of water properly, are the two types of overhydration.

The NHS says: ‘In climates such as the UK’s, we should drink about 1.2 litres (six to eight glasses) of fluid every day.’

She explained: ‘They said they couldn’t make me any promises. I couldn’t go [in] because of Covid-19 restrictions.

‘They said the next 24 hours were critical. He was in the intensive care unit for two to three days – he was on a ventilator.

‘The hospital staff were brilliant. They did some tests and corrected his electrolytes. Then he could come home.’

Luke is now on his way back to full health and starts work again full-time in the coming months.

Laura said: ‘He still gets tired. He had six months off work, signed off. When he first went back he did four hours, then six hours.

‘They have let him go back that way. He usually does 12-hour shifts.’

Doctors have concluded Luke suffered water intoxication and flushed the sodium out of his body, leading to swelling of the brain.

He estimates he had been drinking four to five litres a day. The recommended amount is six to eight glasses.

Luke is now sharing his story as he wants Laura to be recognised for her actions, both at the time and as he got better.

The couple have four children, who needed help with their home-schooling during the lockdowns.

Laura kept this up while also providing mental health support and helping to arrange food parcel donations for struggling families for her job.

She has since left her role as a youth worker and will soon begin working as a teaching assistant in a local school.

Luke, who has nominated his wife in a local ‘Covid Heroes’ campaign, added: ‘She is truly an amazing woman.’