Closely-watched PMI figures show UK economy stabilising after Bank of England says GDP might only dip 0.1% in the final quarter… but firms are holding off on replacing staff

Closely-watched PMI figures have showed the UK economy seemingly stabilising in the run-up to Christmas.

In a chink of light for Brits struggling with the cost of living crisis, the monthly S&P Global/CIPS snapshot detected a marginal reduction in activity.

But the reading of 49 in the flash figures for December – with anything over 50 representing growth – was better than the 48 that had been expected by analysts. It was also up from 48.2 last month.

The signs of resilience came after the Bank of England said it now believes UK plc will only shrink by 0.1 per cent in the final quarter of the year, rather than the 0.3 per cent it predicted last month.

However, economists warned it will probably still not be enough to avoid a formal recession – defined as two successive quarters of contraction.

And there was gloomier evidence with the number of people employed by private companies falling for the first time in close to two years. 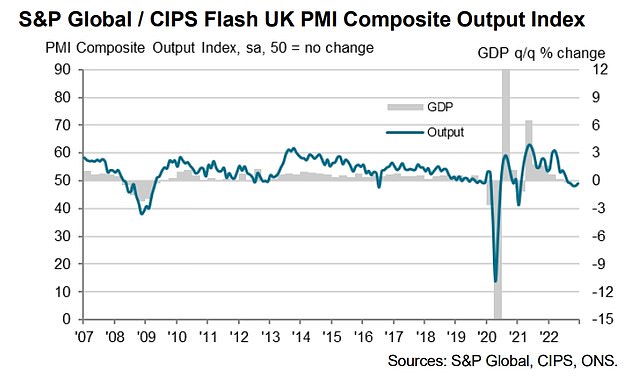 The PMI figures showed the services sector flatlining at 50, following two months of decline. That offset a further drop in manufacturing, where the rating of 43.9 was the lowest since August.

The survey found that there has been a reduction in headcounts so far this month, the first time since February 2021 that employment has dropped.

Chief Business Economist at S&P Global Market Intelligence Chris Williamson said: ‘The December data adds to the likelihood that the UK is in recession, with the PMI indicating a 0.3 per cent GDP contraction in the fourth quarter after the 0.2 per cent decline seen in the three months to September.’

He said: ‘For now, the downturn looks to be relatively mild, and the easing in the rate of decline in December is encouraging news, as is the further marked cooling of inflationary pressures.

‘However, the fact that the downturn has moderated compared to the turmoil created in the immediate aftermath of the botched ‘mini budget’, most notably in financial services, is no real cause for cheer.

‘It is especially worrying to see business confidence and order book indicators remain so low by historical standards, with both of these key gauges signalling heightened degrees of economic stress.

‘Hence it’s no surprise to see that businesses are battening down the hatches, most notably by reducing headcounts, in a sign that the downturn not only has further to run but could yet accelerate again, especially given December’s further hike to interest rates.’ 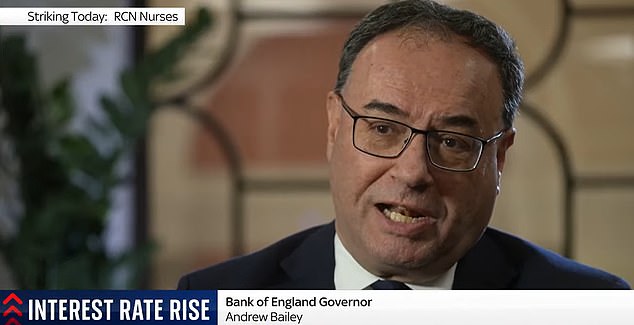 The signs of resilience came after the Bank of England said it now believes UK plc will only shrink by 0.1 per cent in the final quarter of the year (pictured, Governor Andrew Bailey)

Dr John Glen, CIPS chief economist, said: ‘Customers were tightening their belts all round in December as new order levels continued to fall in manufacturing and services industries, and for the first time since February 2021 the UK’s stricken economy affected job creation, especially across the UK’s manufacturing sector.

‘The manufacturing sector suffered another sharp drop in output that was the fastest since August as weak demand and damaged supply chains affected the delivery of raw materials and items such as electronic components.

‘Without a strong economic wind behind them manufacturers started to doubt the need for their current headcounts and shed jobs at a quicker pace.

‘Service sector activity evened out after their patchy performance over the last couple of months and performed better in December but were still blighted by high costs.’