There were only two times in Xi Jinping’s hour-long speech on Thursday where the crowd interrupted the Chinese President’s address to the nation.

Willed on by the rising rhetoric of their leader, the thousands assembled in Beijing’s Tiananmen Square to mark the centenary of the Chinese Communist Party swapped their choreographed clapping for loud cheers.

“Chinese people will never allow any foreign force to bully, oppress, or subjugate us,” Xi said to roars of assembled soldiers, teachers, students, nurses and cadres. 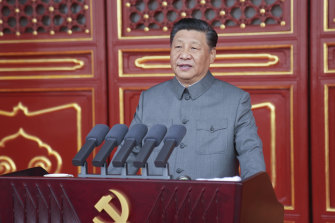 “Anyone who would attempt to do so will find themselves on a collision course with a great wall of steel forged by over 1.4 billion Chinese people.”

The message was clear. Nationalism is becoming the de facto ideology of Xi’s China. Having wiped out any opposition at home over a century of building power, the great struggle of Xi’s CCP is no longer against counter-revolutionaries, it is against those outside China’s borders who would seek to contain its rise.

Xi told the Party Central Committee in February that it had reached a “historical inflection point”, marked by the transition between its first and second centuries.

We are now seeing how that shift will play out in public.

“Resolving the Taiwan question and realising China’s complete reunification is a historic mission and an unshakable commitment of the Communist Party of China,” Xi said.

“No one should underestimate the great resolve, the strong will and the extraordinary ability of the Chinese people to defend their national sovereignty and territorial integrity.” 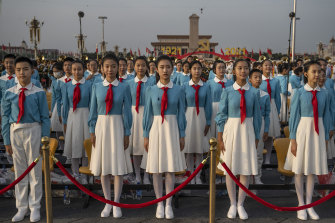 At the same time, China has begun construction of more than 100 new silos for intercontinental ballistic missiles capable of launching nuclear weapons, according to commercial satellite images obtained by researchers at the James Martin Centre for Nonproliferation Studies and reported by The Washington Post.

“We have never bullied, oppressed, or subjugated the people of any other country, and we never will,” Xi said.

It would be hard to get past the chutzpah for a protester in Hong Kong, a Uighur in a re-education camp or a Taiwanese farmer listening to the zoom of 28 fighter jets overhead, but of course, they fail to understand the big picture.

In Xi’s China, these are all inalienable parts of the Middle Kingdom.

Australia too could feasibly claim that it had been bullied through $20 billion in trade strikes.

But to those gathered in Tiananmen Square, a site whose past has been scrubbed clean, there would be no contradiction here. China has its red lines and Australia repeatedly crossed them when it called for a coronavirus inquiry, banned Huawei and spoke out about Xinjiang and Hong Kong. 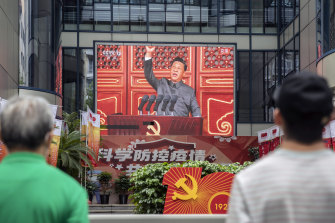 Pedestrians watch a screen showing a live news broadcast of Chinese President Xi Jinping speaking at a ceremony marking the centenary of the Chinese Community Party.Credit:Bloomberg

The belligerent rhetoric, clearly targeted at stirring nationalist sentiment on this mighty anniversary, threatens to overshadow what is a remarkable economic and political story.

In the space of 100 years, the CCP has grown from 53 members to 95 million. It is the world’s most successful political party, turning guerrilla revolutionaries into statesmen over more than 70 years of uninterrupted power.

It has doubled its GDP every eight years since liberalisation in 1980 and lifted 800 million people out of poverty. In 1980, China’s GDP was $408 billion. Today it is worth more than $18 trillion and it will overtake the US – the world’s dominant superpower of the 20th century – by the end of this decade.

But as living standards rise, so does the temptation of freedom of thought, fuelling ambition, innovation and creation. The Party has been so successful in binding wealth to the collective goal that it needs a new national struggle to rally the cadres.

The hundreds of Communist Youth League delegates who sang on Thursday said they were ready for service.

“We are ready to realise the great dream of national rejuvenation,” the mini cadres sang. “One hundred years and still young. We are the ones to make our country strong.”