Colombian police clash with protesters, leaving 19 dead in a week

Police have been filmed beating an unconscious protester and dragging him away during a night of violent clashes with anti-tax protesters in Colombia.

At least 19 people have been killed in a week of street battles between police and protesters, with at least five deaths reported last night in the city of Cali which has become a focal point for demonstrations.

The protests began last week against a proposed tax hike but have since snowballed into a movement against President Ivan Duque and inequality that has been worsened by the Covid pandemic.

More video showed officers callously Tasering a man walking along the street, while others images chaos unfolding in the Siloe neighbourhood, one of Cali’s poorest, where clashes with riot offices have been especially fierce.

Global leaders including the UN, US, EU and other human rights organisations today called for an end to the violence, ahead of a planned day of mass marches.

Aside from the 19 dead, figures from Colombia’s human rights ombudsman revealed 846 people have been hurt and another 89 ‘disappeared’ since protests began. 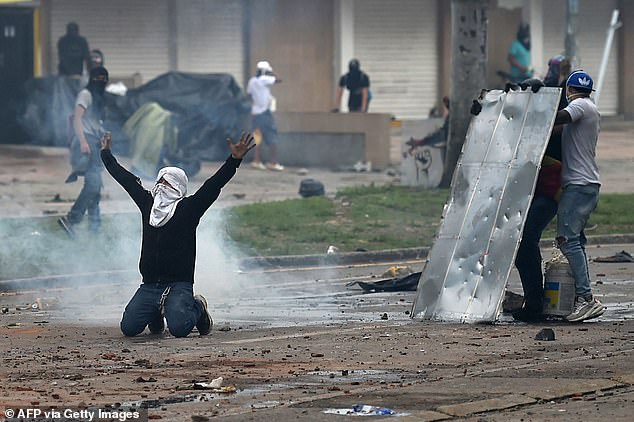 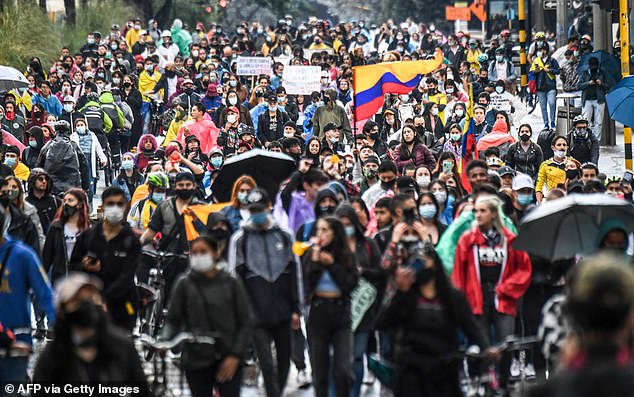 At least 19 people have died in a week, while 89 more have ‘disappeared’ and 846 have been injured as human rights groups call for a halt to the violence 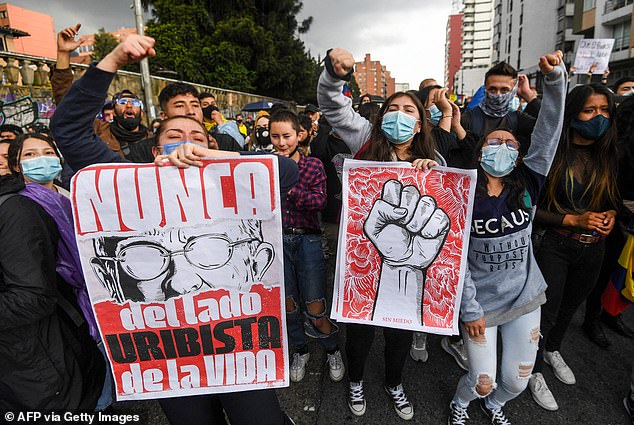 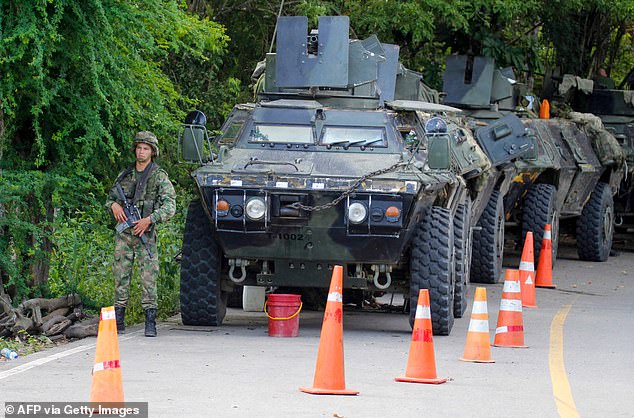 Alongside police, Colombia has drafted in the military sparking fears of violence at mass rallies planned to take place today

Looting, vandalism and attacks on police kiosks have been reported, while the UN human rights office (OHCHR) expressed ‘profound shock’ on Tuesday after officers allegedly opened fire overnight in Cali.

‘What we can say clearly is that we have received reports, and we have witnesses, (of) excessive use of force by security officers,’  OHCHR spokeswoman Marta Hurtado told reporters in Geneva.

‘Shooting, live ammunition being used, beatings of demonstrators and as well detentions,’ she added.

‘Given the extremely tense situation, with soldiers as well as police officers deployed to police the protest, we call for calm.’

She urged security forces to use firearms only as a last resort when facing an imminent threat of death or serious injury.

The Ministry of Defense has deployed 47,500 uniformed personnel countrywide. In Cali alone, 700 soldiers, 500 riot police officers, 1,800 other police and two helicopters have been put into operation.

By nightfall Tuesday, fresh havoc was already being wreaked on the capital where dozens of people attacked police stations.

She added that police had been shot and wounded with knives, and one station was set on fire while officers were inside.

The government secretariat tweeted that 16 stations had been vandalized.

Earlier, Lopez had urged protesters to record ‘what is happening in the street’ to prevent abuses, after her request for police to stop using rubber bullets against demonstrators was rejected.

In several parts of the country, roadblocks were erected, causing concern for deliveries of oxygen and other medical supplies as the country grapples with its latest surge of the coronavirus.

South America’s football governing body, CONMEBOL, meanwhile announced that three games that were to be played this week in Colombia as part of the Copa Libertadores and Sudamericana competitions have been moved to Paraguay as a result of the ongoing unrest.

Duque’s government has officially acknowledged just one civilian and one police death, and blames violence on armed groups operating in the country.

‘Nothing justifies armed people who, protected by the legitimate desires of citizens to march, go out to shoot defenseless citizens and cruelly attack our police,’ said Duque, who on Sunday withdrew the proposed tax reform that sparked the protests. 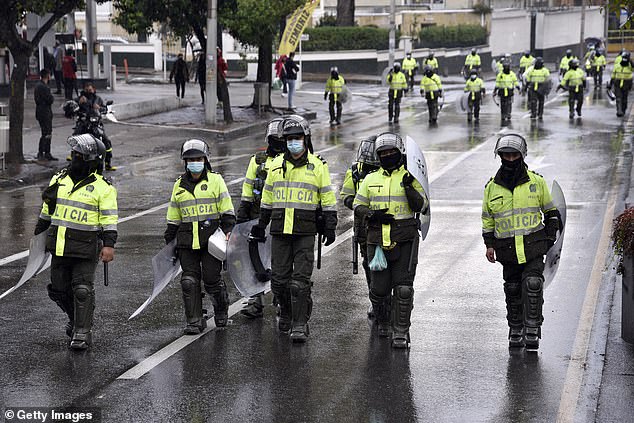 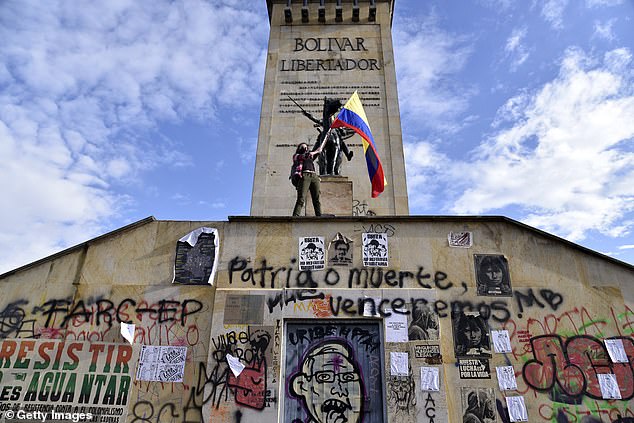 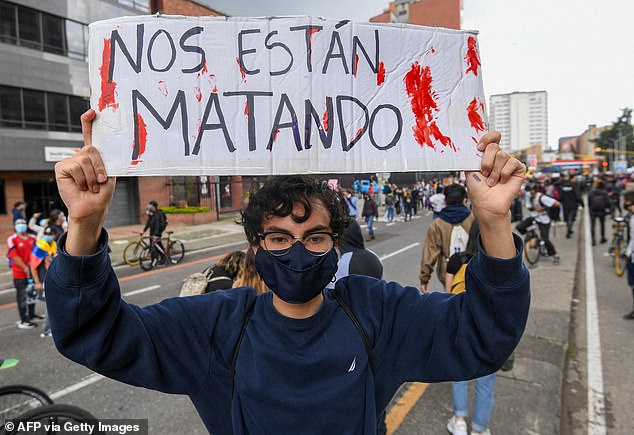 A demonstrator holds a sign reading ‘They are killing us’ during a protest against tax hikes on the streets of Bogota, Colombia

Three uniformed officers have been shot since the demonstrations began.

‘Our public forces must be ruthless towards those who use vandalism,’ the minister warned.

The European Union on Tuesday condemned the reported deaths – 18 civilians and a police officer.

EU spokesman Peter Stano said it was a priority to stop the escalation of violence ‘and to avoid any disproportionate use of force by security forces.’

US State Department deputy spokeswoman Jalina Porter underlined the right of all people to protest peacefully.

‘Violence and vandalism is an abuse of that right. At the same time, we urge the utmost restraint by public forces to prevent additional loss of life,’ she said.

The anti-government protests come at a time of economic despair for many, fueled by the global coronavirus crisis.

In its worst performance in half a century, Colombia’s GDP shrank 6.8 percent in 2020, and unemployment stood at 16.8 percent in March.

Almost half the population lives in poverty, according to official figures.