Denver: An estimated 580 homes, a hotel and a shopping centre have burnt and tens of thousands of people were evacuated in wind-fuelled bushfires outside Denver, officials said.

Boulder County Sheriff Joe Pelle said only one injury has been reported, but didn’t rule out finding out later about more severe injuries or death due to the intensity of fires that quickly swept across the region as winds gusted up to 169kph.

The wildfires, spanning 6.5 square kilometres, engulfed parts of the area in smoky, orangish skies as residents scrambled to get to safety. 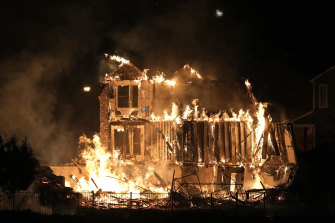 Homes burn as a wildfire rips through a development near Rock Creek Village, near Broomfield, Colorado, on Thursday night (Friday AEDT).Credit:AP

The city of Louisville, which has a population of about 21,000, was ordered to evacuate after residents in Superior, which has 13,000 residents, were told to leave. The neighbouring towns are roughly 32 kilometres north-west of Denver.

Several blazes started in the area on Thursday, at least some sparked by downed power lines.

Six people who were injured in the fires were being treated at UCHealth Broomfield Hospital, spokesperson Kelli Christensen said. A nearby portion of US Highway 36 also was shut down. 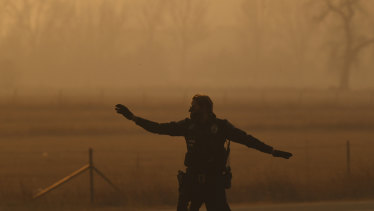 A police officer secures an intersection in Louisville, Colorado, as wildfires force residents to evacuate.Credit:Dever Post/AP

Colorado’s Front Range, where most of the state’s population lives, had an extremely dry and mild fall, and winter so far has continued to be mostly dry. Snow was expected on Friday, US time, in the region.

One video captured by a bystander outside a Superior Costco store showed an apocalyptic scene with winds whipping through barren trees in the parking lot surrounded by grey skies, a hazy sun and small fires scattered across the ground.

Leah Angstman and her husband saw similar dark skies while returning to their Louisville home from Denver International Airport after being away for the holidays. As they were sitting on the bus going toward Boulder, Angstman recalled instantly leaving clear blue skies and entering clouds of brown and yellow smoke.

“The wind rocked the bus so hard that I thought the bus would tip,” she wrote in a message to The Associated Press. 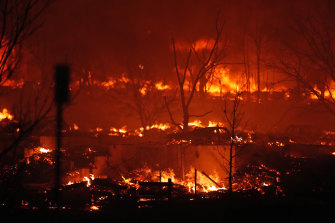 Wind-fuelled wildfires outside Denver have claimed hundreds of homes, a hotel and a shopping centre. Credit:AP

The visibility was so poor that the bus had to pull over and they waited a half-hour until a regional transit authority van escorted them to a turnaround on the highway. There she saw four separate fires burning in bushes across the freeway, she said.

“The sky was dark, dark brown, and the dirt was blowing in swirls across the sidewalk like snakes,” she said.

Angstman later ended up evacuating, getting in a car with her husband and driving northeast without knowing where they would end up.

Vignesh Kasinath, an assistant professor of biochemistry at the University of Colorado in Boulder, evacuated from a neighbourhood in Superior with his wife and her parents. Kasinath said the family was overwhelmed because of the sudden evacuation warning and anxious from the chaos while trying to leave.

“It’s only because I am active on Twitter I came to know about this,” said Kasinath, who said he did not receive an official evacuation notice from authorities.

The fires prompted Governor Jared Polis to declare a state of emergency, allowing the state to access disaster emergency funds.

The evacuations come as climate change is making weather more extreme and wildfires more frequent and destructive, scientists say. A historic drought and heat waves have made wildfires harder to fight in the US West.