Littleton, Colorado: In the 20 years since the massacre at Columbine High School, the building has become a macabre tourist attraction for the curious and the obsessed.

Even though the building is still an operating high school the tourists travel from as far as Brazil or Japan, hoping to walk the halls, to look for the two teenage gunmen's lockers. They come every day, and more come with each passing year. 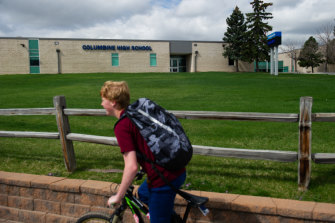 An onslaught of Columbine obsessives confronts two full-time officers every day in the parking lot or on the edges of campus. The school was extensively renovated after 1999 and is now protected like a fortress. It has cameras, doors that lock remotely, security monitoring 24 hours a day.

Now, in an effort to stop the escalating threats against the school and lessen Columbine's perverse appeal to copycats and so-called Columbiners, school officials are proposing to tear it down.

"The morbid fascination with Columbine has been increasing over the years," Jason Glass, the superintendent of Jefferson County Public Schools, wrote on Thursday in an open letter titled "A New Columbine?"

"We believe it is time for our community to consider this option."

School officials said they were still in the early stages of exploring what to do, but one idea was to scrap much of the existing structure and rebuild it farther from the road, where entry onto the school grounds could be better controlled and tour buses could not get such an easy glimpse. The school would keep its silver and blue colours and mascot, the Rebels.

The idea has divided a tight-knit community of current Columbine students, survivors of the 1999 attack and victims' families, who share a fierce love for the school. It has also stirred a debate about whether schools, churches and other places devastated by mass shootings can ever exorcise their legacy by demolishing the buildings where the violence unfolded.

"My heart says, 'No way,'" said Josh Lapp, 36, who was in the library the day the two teenage gunmen entered and started shooting. "It's not changing anything." 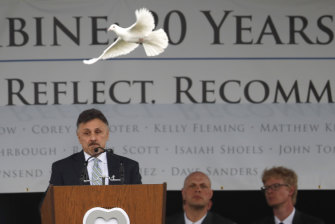 A dove flies over Frank DeAngelis, who was principal of Columbine High School during the attack 20 years ago.Credit:AP

Some survivors said that their memories of hurt and healing were still bound up in Columbine's concrete walls, and that the school should be preserved. Others doubted that school officials could actually succeed in erasing Columbine's dark allure if they simply rebuilt the school on the same grounds and kept its name.

On Friday, Ana Lemus-Paiz, 18, a recent Columbine graduate, said most students she had spoken with were against the idea of razing the school. She counted herself among them.

Lemus-Paiz was not even alive in 1999, when the shooting took place, but she said she had been part of a process of community healing that involved reclaiming the school. While the world may look at the building and see the Columbine of 1999 — a symbol of tragedy — the community, she said, had moved on.

"That building is a symbol of strength," she said. "Our community really did bind together to show that we are stronger than what happened."

At some point we have to stop being the poster child for school shootings around the country.

Lemus-Paiz also said that she believed the school's demolition would do little to staunch the flow of visitors. "As long as the name stands — which it should — people are going to keep coming."

In April, the 20th anniversary of the attack, in which two students armed with guns and explosives killed 12 students and a teacher, was a reminder of that. It had been planned as a time for prayers and memorials, but instead hundreds of schools in Colorado were closed as authorities frantically searched for Sol Pais, an armed 18-year-old woman whom law-enforcement officials said was infatuated with the massacre, had travelled to the state from Florida and made threats.

For John McDonald, the Jefferson County Public Schools safety director, it was just another impetus to knock the school down.

"At some point we have to stop being the poster child for school shootings around the country," McDonald said. "I think it's time." 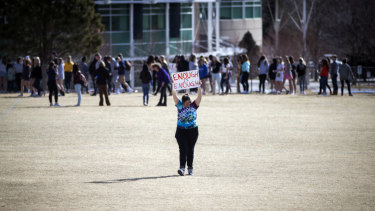 Leah Zundel holds a sign as she and other students from Columbine High participate in a walkout to honour victims of gun violence in March 2018.Credit:New York Times

Glass, the superintendent who oversees Columbine, said that school safety officials stopped hundreds of people each year who try to enter the school or are caught trespassing on campus. This year's numbers were the highest on record.

"I know all of the severity of the threats," he said. "We don't tell everybody all of those things. I think if people knew, they'd be really scared. And they should be. If I didn't think this was something we should consider, I wouldn't have brought it forward."

The school has become a model institution when it comes to safety measures, he said, "but people need to know that it is tested constantly."

The school district released an online survey on Thursday for residents to consider a ballot measure to allocate up to $US70 million ($100 million) for a construction project. One idea was to preserve the high school's library — where 10 students were killed — and make it a cornerstone of a new campus. 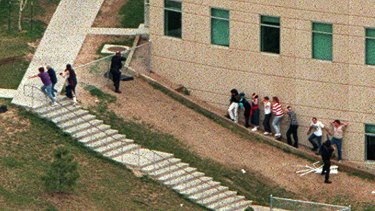 Police officers outside Columbine High School during the shooting rampage in 1999 in which 12 students and a teacher were killed.Credit:AP

Some former students and family members of victims were surprised that school officials were re-examining what to do with Columbine after so many years. They still remember yelling "We are Columbine!" at a rally to reopen the school after the attack.

"Twenty years ago, there was no blueprint," said Frank DeAngelis, who recently retired after serving as Columbine's principal during the attacks and for years after. He supports the proposal to take down the original and rebuild the school.

The school superintendent's letter said that experts recommend tearing down a structure after a school shooting. But schools reckoning with what to do with a bullet-scarred building have few easy choices.

In Newtown, Connecticut, where 20 children and six staff members were killed at Sandy Hook Elementary School in 2012, the school district demolished the building and built a new school on a different part of the same property.

In Parkland, Florida, crews are expected to break ground this summer on a project to replace Building 12 of Marjory Stoneman Douglas High School, where 17 people were killed. The new building is expected to be ready for the 2020 school year.

Other survivors have decided to maintain mass shooting sites to honour victims.

On Friday, Columbine High School looked just like any another school on a June day: The sun beat down on its tan bricks, the parking lot sat half-empty and a park next door was filled with children in bathing suits, who ran with glee around a fountain.

Only a few signs indicated that something darker had happened here — a placard pointing visitors to a memorial and a large sheriff's truck parked horizontally in front of the school's doors.

"It's only a building," said Salli Garrigan, 36, who ran through Columbine's auditorium and halls as the sounds of gunshots exploded around her.

"All of those memories will be there, whether the building is or not."