Conman stole OAP's savings after 'brainwashing' her into wedding dream

Scammer ‘brainwashed’ retired dinner lady, 76, into believing they would get married so he could steal her £20,000 life savings… before she died with just £120 in bank and the wedding dress she hoped to wear

A scammer ‘brainwashed’ a retired dinner lady into believing they would get married so he could steal her £20,000 life savings, her son claims – before she died with just £120 in the bank and the wedding dress she hoped to wear.

Elaine Chamberlain, from Sheffield, South Yorkshire, was duped into thinking the man loved her and would make her his wife – to the extent she bought a dress and rings to prepare for the big day.

But as she died aged 76 last month, it emerged she had been fleeced, much to the heartbreak of son, Richard, who had desperately tried to warn her, which put a strain on their relationship.

When the scammer video called her mobile looking for yet more money shortly after, Richard intercepted the call and, after being asked where Elaine was, told the man on the other end: ‘She’s dead, you killed her.’

He added that they ‘ruined’ his mother’s life and ‘stole her dignity’ by fleecing her of her finances and destroying her personal relationships.

Richard, 53, a retail manager also from Sheffield, said: ‘These people were in her head. 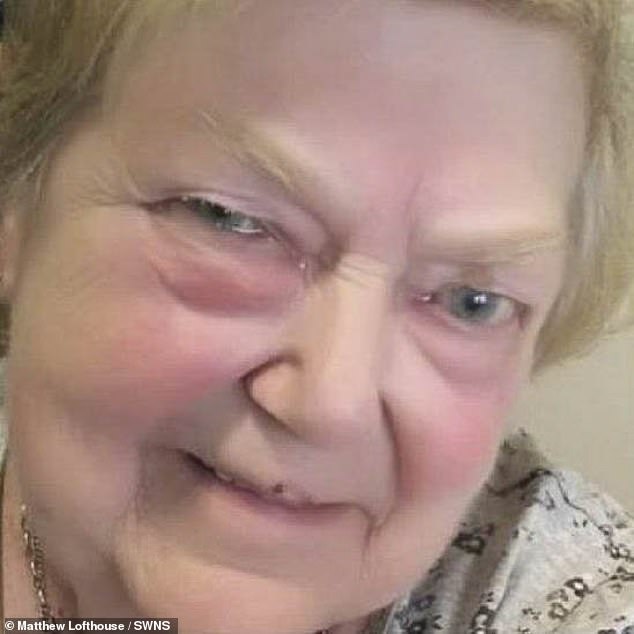 Tragic Elaine Chamberlain believed she was going to marry a man who turned out to be a scammer, and had purchased a wedding dress and marital rings in the runup to her death aged 76 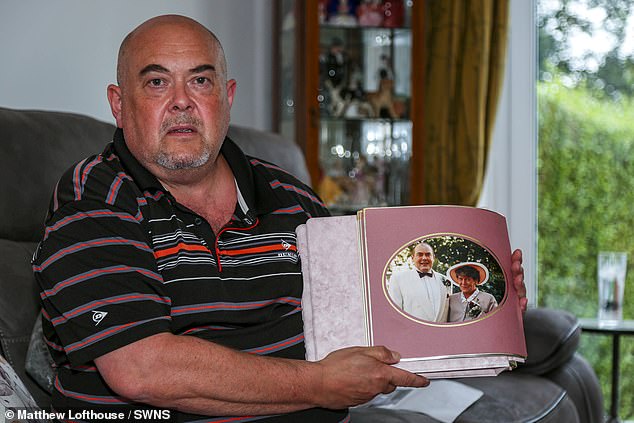 What are the signs that a loved one has been scammed and how can you help?

You may be worried that someone you know has become victim to a scam. Look out for these warning signs:

Some scam victims don’t realise that they are being scammed, or refuse to believe it. They may feel that the scammers are their friends, or that their returns or prizes will come through if they continue to respond. This can make it very difficult to talk to them about getting help.

If you’re concerned that an adult who needs care and support has been affected by a scam you can raise your concerns with the local council’s adult social services department. They will make safeguarding enquiries and work with the adult to consider the action that needs to be taken.

Richard said his mother, who had arthritis, started ‘deteriorating’ following the death of her partner of 31 years, Danny, in 2013.

He added: ‘When he died mum was lost, he was the love of her life.’

The first sign of trouble came in 2019 when Elaine said she had met a man online but became ‘vague’ when asked about him, Richard said.

He added: ‘I knew scammers were about so I said to her, ‘you’re sending him money are you?’ and she said that she wasn’t.’

Elaine, a former dinner lady, was led to believe the person she was talking to was a white man in his 60s, working abroad as a diver on a ship.

However, he carried out online research and established the image being shown to Elaine had been taken from a Welsh man’s Facebook profile.

His worries were confirmed a short time later when Elaine, a grandmother-of-one, answered her phone on loud speaker and Richard heard a young man’s voice on the other end.

He said: ‘You could tell from the voice that it wasn’t the man in the picture.

Richard believes Elaine became aware the man she was talking to was not who was in the picture and instead was a young black man.

However, he said it ‘did not matter to her’.

In early 2020, the Post Office where Elaine deposited the cash contacted South Yorkshire Police about unusual activity from her account and officers went to see her.

According to Richard, they told her that what she was doing wrong and advised her to stop, while he notified social services and his mother’s bank.

However, she got round the obstacles he had set by visiting money exchange centres instead of Post Offices and transferred the money that way, he said.

Richard, after finding out what was happening, added: ‘I said, ‘what the hell are you doing, mum?’ and she said, ‘it’s to help his sick son’.

Within weeks Richard had found receipts showing his mother had been asked to send money to UK addresses in Leeds and London.

He claims to have told police and urged them to investigate, but says he was told his mother had chosen to send the money, so there was nothing they could do. 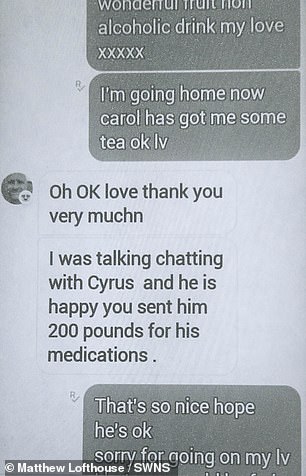 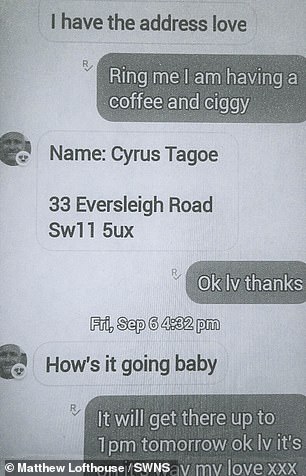 Texts sent from one of the scammers to Elaine, who went on to buy a wedding dress and rings 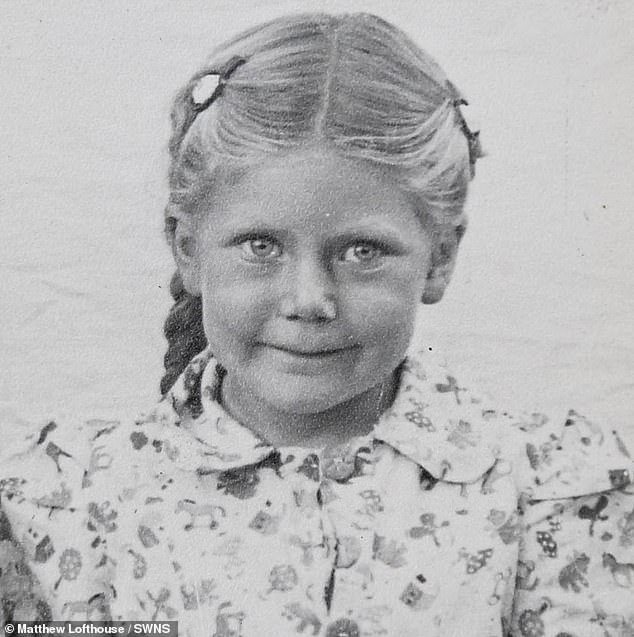 Elaine, pictured as a child, was led to believe the person she was talking to was a white man in his 60s, working abroad as a diver on a ship

Richard added: ‘The whole situation with my mum was having an effect on my relationships, I’d hit rock bottom with it.

‘I was doing everything I could to stop what was happening but it felt like I was just banging my head against a brick wall.’

Richard tried to get things under control by taking hold of her financial affairs, however, he went on holiday and returned to find she had reversed everything.

He said: ‘By that point my mum was brainwashed.’

Richard said he had to remove himself from the situation for mental health reasons and that he didn’t speak to his mother for a few months.

When they got back in touch at the end of 2020, he said: ‘Mum was in really poor health and the house was in a terrible state.

‘All she was interested in was this man, she was constantly online talking to him.

‘I was looking at my mum and it was like looking at a blank page, all these people had to do was click their fingers and she would do anything.’

He added: ‘I saw her account and there was another £5,000 missing but she denied still talking to him. It hurt to be constantly lied to.’

Richard said he went to see his mother days before she died in May this year and that she looked in terrible health.

He added: ‘She didn’t have a tea or coffee in three hours and she’d normally have one every 20 minutes.

‘I could tell she wasn’t taking her tablets or drinking and said that I would get in touch with the doctor.’

Just two days later Richard received news that his mother had been rushed to hospital with cellulitis, and within hours that she had died from multiple organ failure. 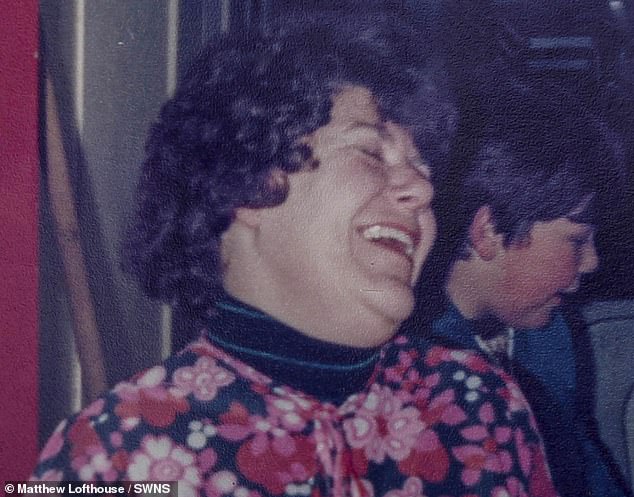 The first sign of trouble came in 2019 when Elaine said she had met a man online but became ‘vague’ when asked about him, Richard said 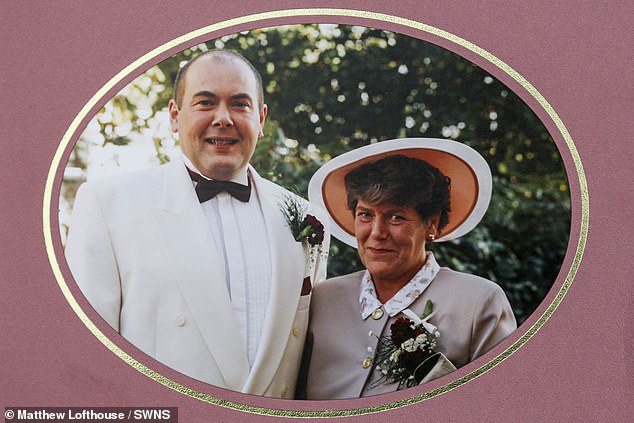 Elaine started ‘deteriorating’ following the death of her partner of 31 years, Danny, in 2013, her son said (pictured together on his wedding day)

He said: ‘We went to the hospital to see her and when we walked in her phone was ringing on FaceTime.

‘I answered and it was a black man in his 30s asking for Elaine, I said ‘she’s dead, you killed her’, and put the phone down.’

Richard then discovered his mother died with only £120 to her name.

And he later found a wedding dress and two rings in her bedroom. She had sent pictures of herself wearing the dress to the scammers.

Richard said: ‘I think my mum knew that the game was up and gave in. She instigated her own death in my opinion.’

He added: ‘I want to speak out about what happened to my mum to try and prevent the same thing from happening to anyone else.

‘These scammers are so horrible and nasty, they ruin people’s lives, they ruined my mum’s life.’