COP26: Melting glaciers could see Peru’s economy crash if no action is taken on climate change

At the end of the trek he assures me I will see first-hand the magnificent Yanapaccha glacier high in Peru‘s Cordillera Blanca mountains. 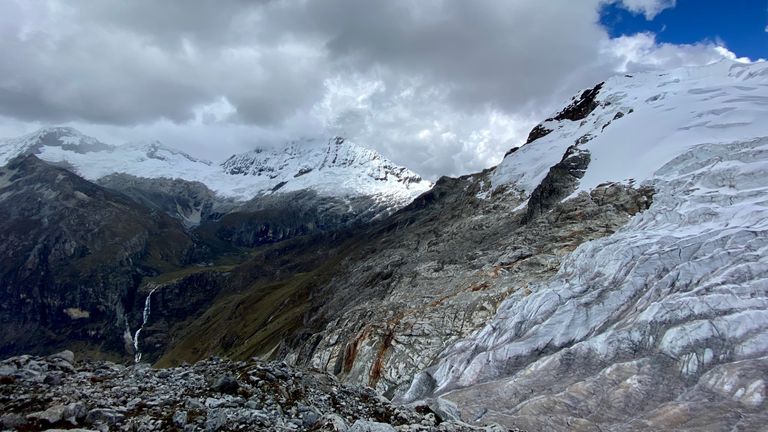 Already at 3,500m I was gulping for air. Now only a day in the Andes, with little acclimatisation, I was trying to get to nearly 5,000m while hiking for two hours, climbing over slippery rocks and mud, along barely discernible trails.

Looming above me were the peaks of mountains, sunlight glinting off the snow and ice; all around the sound of minor avalanches rumbling through the valleys, above pristine blue lakes fed by the melt water of the glaciers.

You used to be able to drive to these particular glaciers in Peru, now to see them you have to trek.

“Slow, small steps Stuart, don’t rush,” Charlie Good, my guide, a British man who has been here for 17 years told me.

He smiled as I heaved over my trekking poles at the top of a particularly testing climb, of around 5m, a huge distance I can assure you when your head is thumping and you can barely breathe in the thin air.

Finally we reached the glacier, an enormous sheet of ice above a grey expanse of moraine – debris and rock once carried by the glacier, but now exposed because it has retreated.

We had come to see first-hand what many are predicting is the slow but certain extinction of the Peruvian glaciers, caused by global warming and guaranteed if climate change is not halted over the next 20 years. Charlie, an expert mountaineer who has been trekking here for almost two decades, told me that the changes to these mountains and its glaciers as a result of global warming aren’t subtle anymore.

“That has receded all the way back, so a couple hundred metres,” he told me, pointing at one of the glaciers.

“You know there’s only one waterfall meant to be coming off that glacier. In November [a couple of years ago] when the sun was almost directly overhead because we’re tropical, there were nine waterfalls coming off it.

“It’s melting before your eyes, I was crying, I was filming a clip and just crying about how much water is coming off that glacier.” The glaciers of the Cordillera Blanca provide water for farming and drinking to millions across northern Peru.

They are vital to the whole of society and the country’s economy, but they are literally melting away at an astonishing rate. One third have gone in just the past ten years.

Some 72% of the world’s tropical glaciers are here.

They exist around the equator at altitudes above 4,000m, but because of their position on the equator they are particularly sensitive to climate change. As the world warms the glaciers retreat.

Signs of climate change and global warming first appeared in this part of the world in the mid-1970s.

The glaciers began to melt, but at the time it wasn’t a disaster, in fact the sudden appearance of abundant water supplies helped fuel an agricultural “gold rush” downstream.

Since then, commercial farming has been thriving here, with exports around the world.

That economy is dependent on the glacial waters and if it dries, which some researchers predict, the land could turn back to desert, cutting off people’s livelihoods and fundamentally altering society.

One of the world’s leading authorities on this is glaciologist Cesar Portocarrero. We met him at his home in Huaraz where he has lived for 50 years and he drove with us to a viewing point up the mountain.

The 74-year-old first arrived here as a disaster management surveyor, but through a chance meeting with a scientist, he agreed to move to the mountains and there began a lifelong mission to understand and explore climate change by studying the glaciers.

He has been warning Peru and the world about the effects of climate change for decades and is frustrated at the lack of action.

“Peru is facing a major water crisis,” he told me, “and there is no plan.” He explained how the glaciers not only provide water to the communities in the valleys, but are critical to Lima’s water needs as well.

Lima is one of the driest capitals in the world, when it rains there it makes front page news and rolling television coverage.

Cesar says we are on the edge of disaster and is imploring leaders meeting at COP26 in Glasgow to step up to the challenge – not today but yesterday. 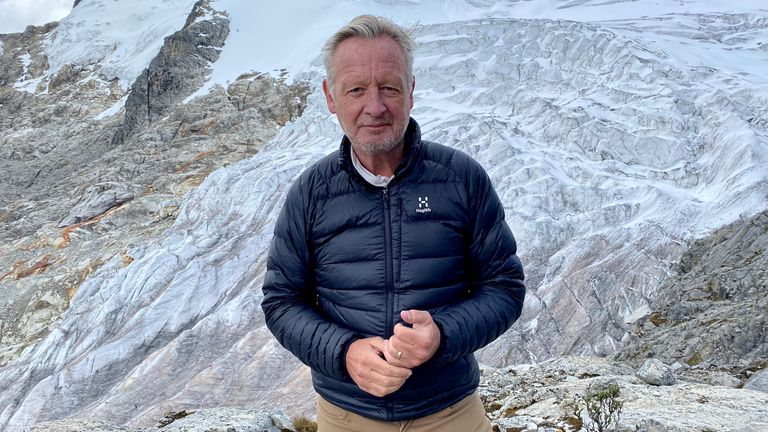 “Our glaciers will last perhaps some decades more, but in 2050 we will have only a small amount of glaciers,” he explained.

He is a grandfather himself who has been fighting for the world to acknowledge what is happening. At times he is emotional when he thinks about their future.

“We are going to leave this world some time in the near future, but we are leaving the problem, as James Hansen says, ‘storms for our grandchildren’.

“We are leaving the problem for them and if we love them we should work from now.”