Home » World News » Could Boris Johnson be a Jedi knight?

Could Boris Johnson be a Jedi knight? 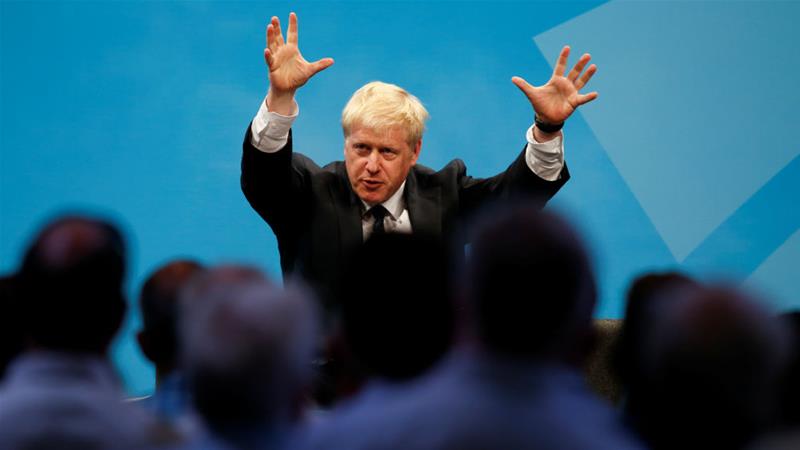 Jedi knights are known as an ancient order of warrior monks who harness the power of a life-sustaining energy called “the Force” as the ultimate guardians of peace.

They are, of course, fictional, found only in the universe of the Star Wars film franchise.

Boris Johnson is not fictional. Neither does he exist a long time ago in a galaxy far, far away. He’s the gaffe-prone former mayor of London and the most likely next prime minister of the United Kingdom.

But the bombastic Conservative MP said on Tuesday he identified with the selfless protectors.

“Star Wars – I’ll tell you what – I identify very much with the guy with the lightsabre – the Jedi knights,” Johnson said, referring to the Jedi’s sword-like weapon, when asked who his favourite character was in the films.

“I am proud to say the lightsabre is manufactured, was invented, in South Ruislip – the constituency I represent,” he added.

“I have a lightsabre in my office in Westminster – it is a most beautiful thing which was presented to me by no less a figure than Christopher Lee,” he said.

In the Star Wars films, Lee played Count Dooku, an evil master of the Sith – an order devoted to the “Dark Side” of the Force. In the films’ canon, Dooku, himself a former Jedi knight, had turned to the Sith after maintaining the Jedi should be allowed to maintain family wealth.

Johnson’s tax plans, meanwhile, have been strongly criticised for mostly seeking to help the wealthiest eight percent of Britons. He has also slammed Labour’s suggestions of lowering the threshold at which inheritance tax is paid.

“We invented the lightsabre in Uxbridge, it is wielded in Northern Ireland [where some scenes from the film were shot]. The resulting film is shown around the world … or something like that,” Johnson added.

Johnson was speaking in Northern Ireland, where he has taken part in hustings for the Conservative Party leadership contest against his rival, foreign secretary Jeremy Hunt.

Johnson accused the European Union of “moral blackmail” over Northern Ireland, as he insisted he would never allow the return of a hard border with the Republic of Ireland – which will remain a member nation of the EU.

The UK’s border with Ireland has played a central part of the national debate since the 2016 Brexit referendum, having featured only minimally during the campaign.

Following decades of political violence, a hard-fought peace was won in 1998 and more-or-less frictionless passage through the border was established.

But Northern Ireland is now due to leave the EU with the rest of the United Kingdom, meaning a different set of trade laws, customs laws and laws regarding the movement of people – and much more that has yet to be negotiated, such as food standards and tariffs under any future trade deals the UK or EU strike with other nations.

As a result, Prime Minister Theresa May’s administration had negotiated a “backstop”, or fall-back plan, with the EU, stating that both Northern Ireland and the Republic of Ireland would remain “in regulatory alignment” for an unspecified period.

Neither situation was acceptable to MPs, with the first described as breaking up the sovereignty of the United Kingdom, and the second as having not left the EU in any measurable form.

“Under no circumstances, whatever happens, will I allow the EU or anyone else to create any kind of division down the Irish Sea or attenuate our Union,” Johnson told Conservative Party members in Belfast.

“It is a terrible moral blackmail it puts on the UK government. We can’t have that. The way to protect the Union is to come out of the EU whole and entire. Solve the border issues where they belong in the FTA [free trade agreement] we are going to do.”

Hunt also said he opposed the “backstop” measure because it meant the UK could be trapped in the EU customs regime indefinitely.

“I do recognise that we are never going to have a deal to leave the EU with the backstop. So it has to change or it has to go,” he said.

Hunt said he believed the issue of the border could be resolved through the use of technology to avoid the need for physical checks on people and freight.

He dismissed arguments by the EU that the technology required did not yet exist.