The habit of at-home boozing we picked up in the pandemic is here to STAY, researchers warn, with some 300,000 extra alcohol-related hospital visits adding up to a $5.4bn medical hangover bill over five years

The habit of at-home boozing Americans picked up during the Covid-19 pandemic is here to stay — and it will lead to hundreds of thousands more hospital visits and a multi-billion dollar medical bill, new research reveals.

One study this month found that at-home drinking ‘spiked’ in 2020 and held strong in 2021. Many Americans will be ‘keeping the party at home’ even as Covid-19 restrictions fade and bars and eateries get busier, it said.

Another study found that widespread boozing at home will take a huge toll. Over five years, this will mean 295,000 extra hospital visits caused by alcohol and $5.4 billion more in healthcare costs.

Carolina Barbosa, a health economist with RTI, a North Carolina-based research institute, warned that increased rates of boozing during the pandemic will likely continue and carry a ‘significant health and economic burden’ in the U.S.

Barbosa’s team studied the drinking habits of adults aged over 21 from the early stage of the pandemic, between February and November 2020, when alcohol consumption rates shot up by about 37 percent.

Higher rates of boozing were more marked among women, the over 50s and minorities. 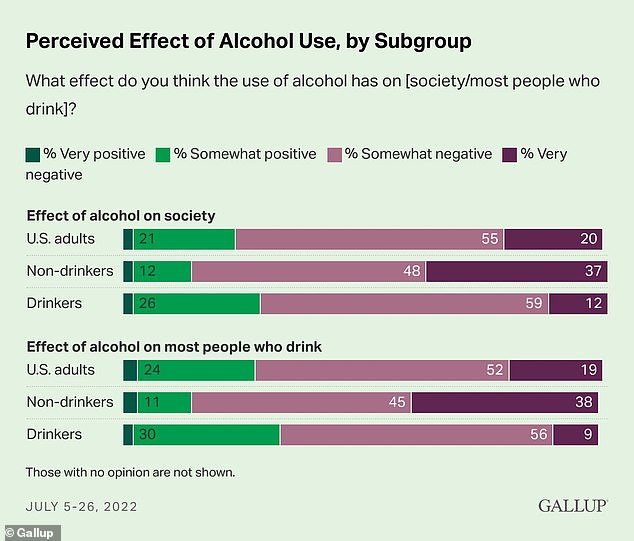 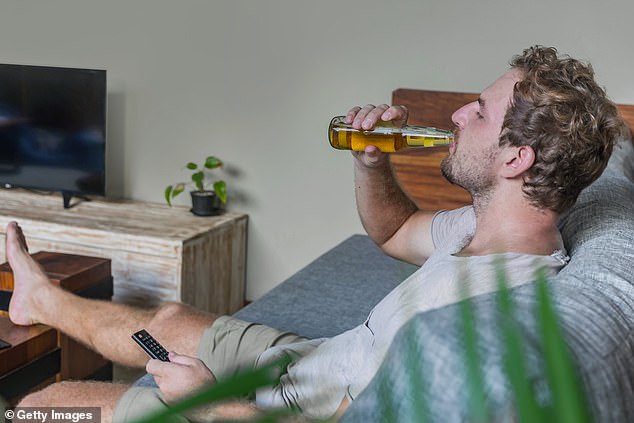 Alcohol sales grew by 2.9 percent in 2020, the first year of the pandemic – the biggest rise in more than five decades

Researchers next calculated the additional toll from five years of higher rates of boozing — and produced the worrying estimates of increased hospitalizations and medical costs.

Hospital visits for cirrhosis of the liver alone would add up to an extra $3.0 billion, said the study.

The other study, from IRI, a data analysis firm, found that ‘many consumers are opting to celebrate and socialize at home’ even as the pandemic abates, lockdowns are lifted, and more people head to bars and restaurants for fun.

Many people have continued drinking at home to save money, as inflation hikes up prices of beer, wine, spirits and other groceries, said the study. Others are using a growing number of online and in-app alcohol delivery services.

Nowadays, 78 percent of meals are prepared at home, compared to 48 percent pre-Covid-19 — another reason for imbibing in kitchens and lounges across the U.S., said researchers.

Booze producers are also targeting at-home drinkers with organic wine, low-calorie beer, hard seltzers and alcoholic kombucha — products that are popular and purport to be healthier than traditional tipples. 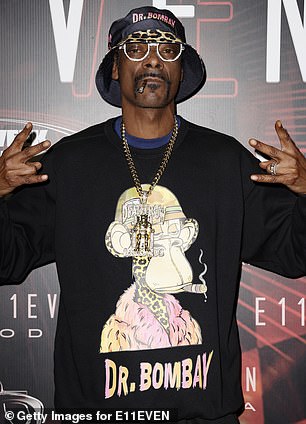 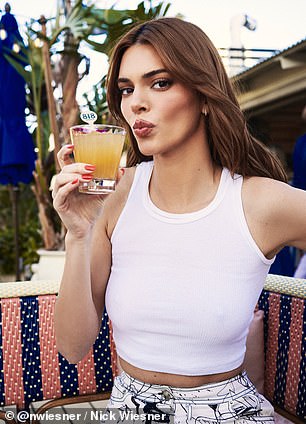 Pre-mixed cocktails are also proving popular in U.S. sitting rooms. Coca-Cola and Brown-Forman Corp., the maker of Jack Daniel’s Tennessee Whiskey, are set to release the canned Jack and Coke later this year.

The U.S. government’s National Institute on Alcohol Abuse and Alcoholism (NIAAA) in June warned that alcohol sales grew by 2.9 percent in the early pandemic year, 2020 — the biggest rise in more than five decades.

While Americans are drinking more, they know it’s not good for them.

Pollsters Gallup this month found that 71 percent of those surveyed said alcohol had a bad effect on tipplers, while three quarters said it was negative for society at large.

‘These perceived negative effects of alcohol are not enough to discourage Americans from imbibing,’ said the study.

‘Two in three say they personally have the occasion to drink alcoholic beverages.’

Beer remains more popular than both wine and liquor, but the gap is narrowing, said the survey. 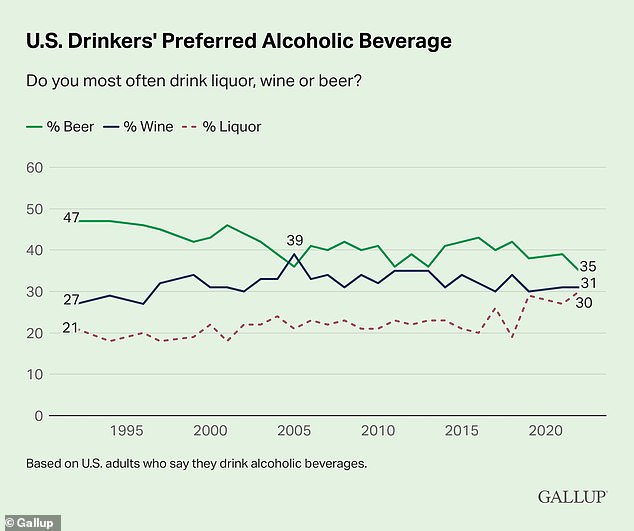 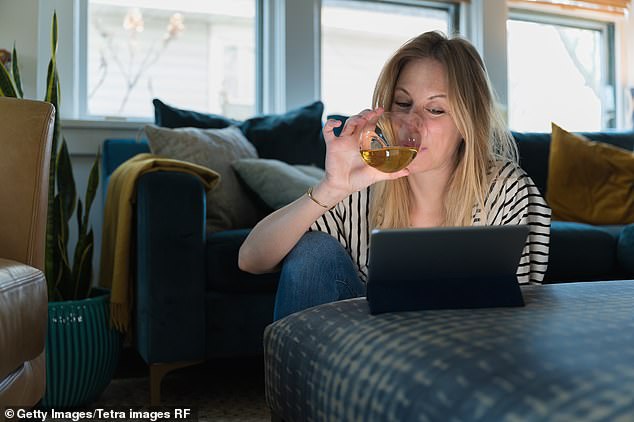 Alcohol consumption rates shot up by about 37 percent in 2020. Higher rates of boozing were more pronounced among women, the over 50s and minorities