Home » World News » Covid can cause a 'substantial' drop in intelligence, study claims

Covid can cause a 'substantial' drop in intelligence, study claims

Covid could make you dumber: Study finds survivors who were hooked up to a ventilator in hospital lost up to seven IQ points

Covid can cause a ‘substantial’ drop in intelligence in people recovering from the virus, research has suggested.

The Great British Intelligence Test examined the IQ of 81,337 people across the UK between January and December last year.

Among those surveyed, 13,000 had caught coronavirus — and they were found to have the largest drop off in intelligence.

And virus survivors who had spent time on a ventilator in hospital lost the equivalent of seven IQ points, data suggested.

This ‘brain fog’ has already been reported by sufferers for weeks, even months after recovering from Covid. Some have told of losing the ability to recall everyday facts or hold a conversation.

It has sparked fears the disease could have long-term cognitive impacts, in a similar way to the lasting effects strokes or microbleeds have on the brain. 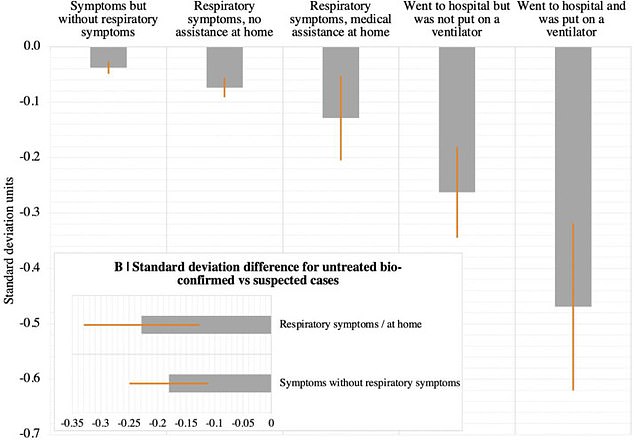 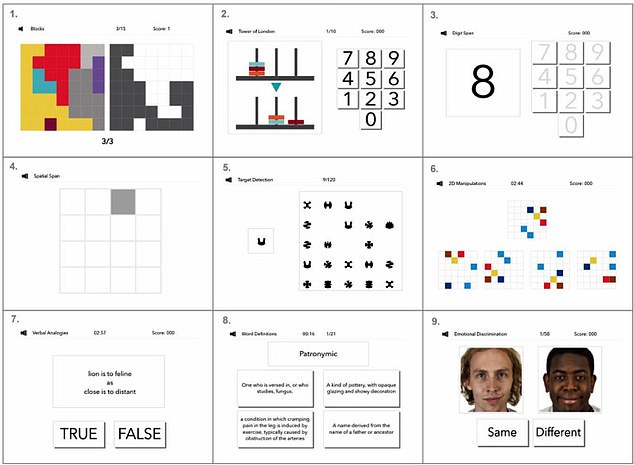 Most coronavirus patients will recover within a fortnight, suffering a fever, cough and losing their sense of smell or taste for several days.

However, evidence is beginning to show that the tell-tale symptoms of the virus can persist for weeks on end in ‘long haulers’ — the term for patients plagued by lasting complications.

Data from the Covid Symptom Study app, by King’s College London and health company Zoe, suggests one in ten people may still have symptoms after three weeks, and some may suffer for months.

For those with more severe disease, Italian researchers who tracked 143 people who had been hospitalised with the disease found almost 90 per cent still had symptoms including fatigue two months after first falling unwell.

The most common complaints were fatigue, a shortness of breath and joint pain – all of which were reported during their battle with the illness.

The Covid research by scientists from Britain and the US was published in EClinicalMedicine, a Lancet-owned journal.

They asked respondents to take on a series of questions to test their mental capacities.

Respondents self-reported whether they had previously contracted Covid and researchers used statistical analysis to determine the drop off in intelligence between people who had the virus and those who had not.

They found people who had Covid had a lower cognitive score than they were modelled to have if they not been infected, based on their age, sex, occupation and other factors.

The authors wrote: ‘These results accord with reports of long-Covid, where “brain fog”, trouble concentrating and difficulty finding the correct words are common.

‘The deficits were of substantial effect size for people who had been hospitalised.’

They said one of the reasons people’s intelligence appear to drop could be the continued effect of Covid to affect their ability to think clearly.

High temperatures and respiratory problems — which have been linked with long Covid in previous studies — make it harder for people to concentrate.

The authors wrote: ‘Previous studies in hospitalised patients with respiratory disease not only demonstrate objective and subjective cognitive deficits but suggest these remain for some at five-year follow-up.’

They warned the study could provide conclusive evidence that a person’s long term IQ can be damaged by Covid with brain imaging data.

They said future research should look into how the virus affects the brain in more detail.

The team analysed questionnaire answers from almost 85,000 people who had recovered from confirmed or suspected Covid.

They discovered that damage to the brain occurred in varying levels depending on how severe the disease had been.

Of those who took part, 60 Covid-sufferers were put on a ventilator, 147 were hospitalised with no ventilator, 176 were cared for at home due to respiratory problems, 3,466 struggled with their breathing but were not medically cared for and 9,201 said they had Covid but with no difficulty breathing at all.

Those who were in intensive care or who needed ventilation, recorded the equivalent of an 8.5-point drop in their IQ.

This is a big enough fall for an individual to notice an impact on their day-to-day life and job, the authors said.