Covid cases in England fell by 6% last week despite 400,000 extra tests being carried out, Test and Trace data reveals

Covid cases in England fell by six per cent last week to 37,000, according to official data that shows the outbreak is continuing to shrink.

The drop came despite a surge of 400,000 tests from March 10 to 17 — when the latest figures go up to. It was the first full seven-day period assessed since children returned to schools.

In the second week since swabbing numbers ballooned as a result of the return to the classroom, cases continued to fall, though at a slightly lower rate than the 18 per cent seen the week before.

It comes as MailOnline revealed coronavirus cases are only going up in children and teenagers, despite experts’ fears infections would balloon after schools reopened.

The Test and Trace figures show the contact tracing scheme successfully received contact details from nine out of 10 positive cases it reached, its highest proportion to date. But the number of close contacts reached by contact tracers fell for the ninth week in a row — amid widespread criticism of the scheme. 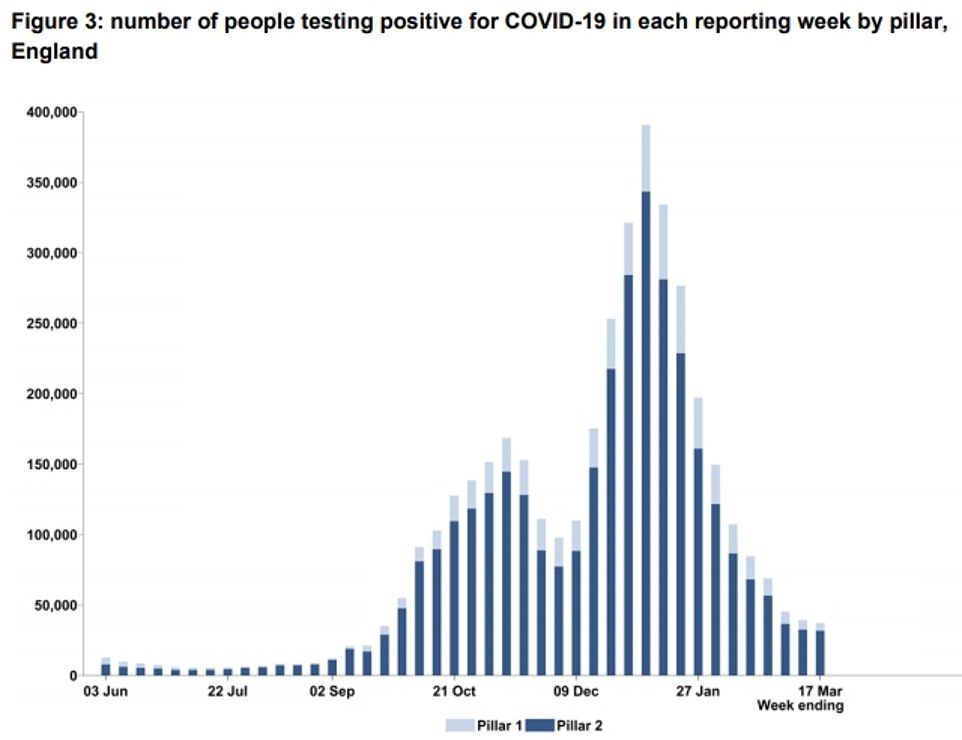 Covid cases fell by six per cent to 37,000 as infections dropped for the tenth week in a row, NHS Test and Trace data has shown 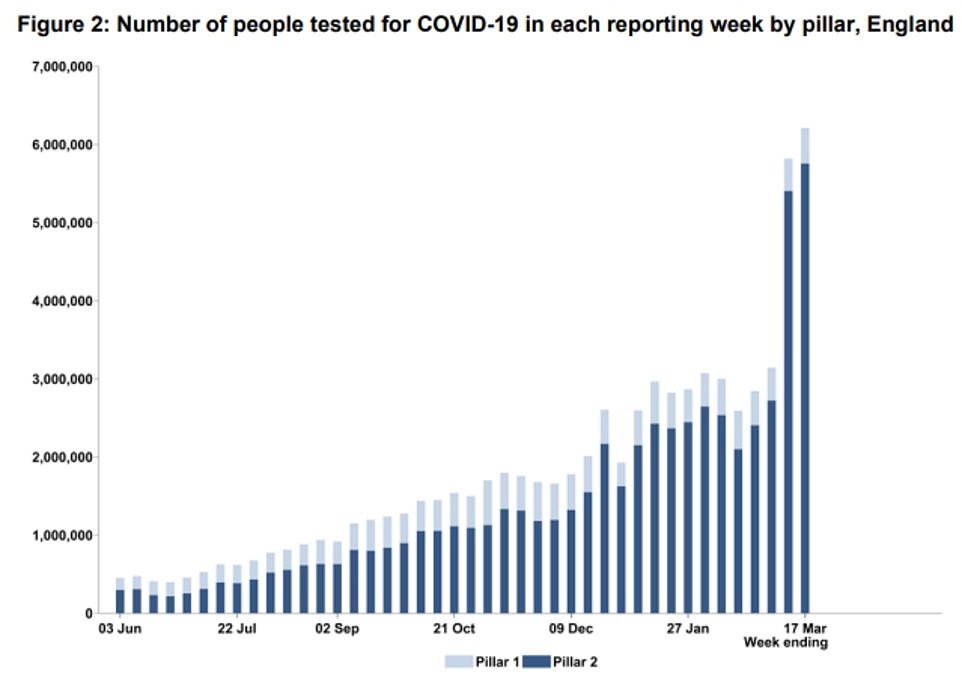 Tests surged by 400,000 tests during the week ending March 17 — a seven per cent rise on the previous week when children first went back to school

Overall, 81 per cent of contacts were reached by call handlers and told to self-isolate, with Thurrock in Essex seeing the most contacts successfully reach with 90 per cent.

Areas in the North fared worse, with four areas having fewer than 70 per cent of contacts successfully told to move into self-isolation.

Bradford in Yorkshire had the fewest, with just 67 per cent of contacts reached by call handlers, followed by Oldham in Greater Manchester and Newcastle-upon-Tyne (68 per cent) and Manchester (69 per cent).

But the drop in cases in spite of a dramatic ramp up in testing has led to renewed positivity, despite experts’ fears cases would balloon after children returned to classes.

Baroness Dido Harding said: ‘We are testing more people than ever before and in the last reporting week alone, the number of people tested increased by seven per cent.

‘These statistics illustrate the huge progress we have made through the testing and tracing system, with our latest data showing we reached nine out of 10 positive cases through contact tracing – the highest proportion to date. 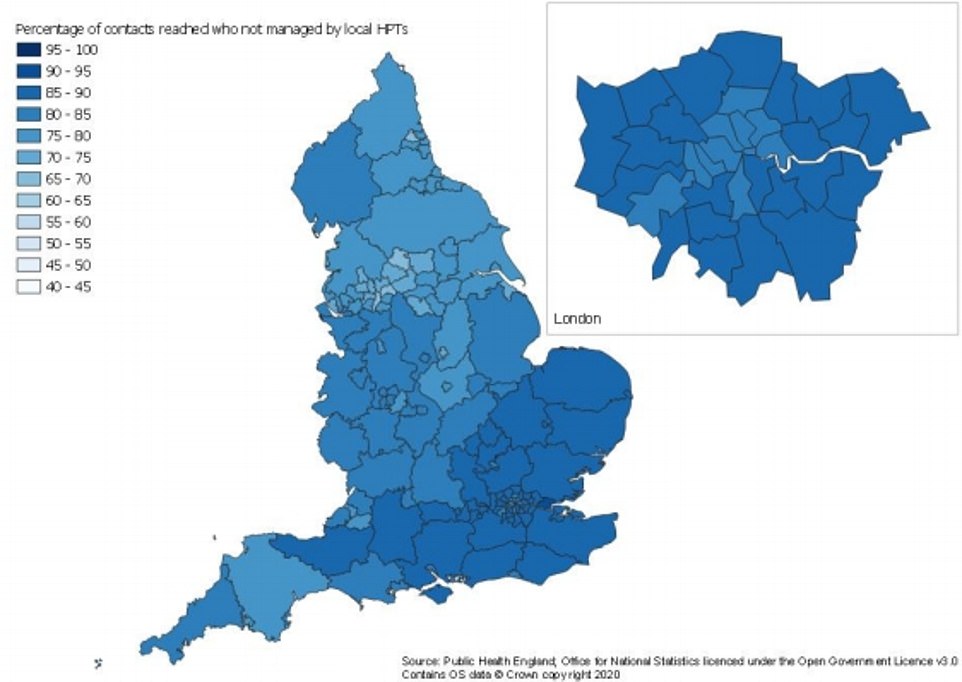 Overall, 81 per cent of contacts were reached by call handlers and told to self-isolate, with Thurrock in Essex seeing the most contacts successfully reach with 90 per cent. Map shows: The percentage of people who had come into contact with someone who tested positive for Covid that were reached by NHS Test and Trace call handlers

‘Testing is already playing a pivotal role in the reopening of schools and making visits to loved ones in care homes possible and people’s continued desire to get tested is helping us identify positive cases rapidly and break the chains of transmission.’

The data will come as a boost to hopes of the Government sticking to its April 12 date for the second stage of lockdown easing.

He said: ‘The rates of numbers of people testing positive for Covid in the UK is continuing to fall, but this is flattening off to some extent over the last week.

‘And this is expected at this point of the curve. It’s going down but more slowly, and we have always expected some upward pressure as people went back to school and some unlocking happened.’ 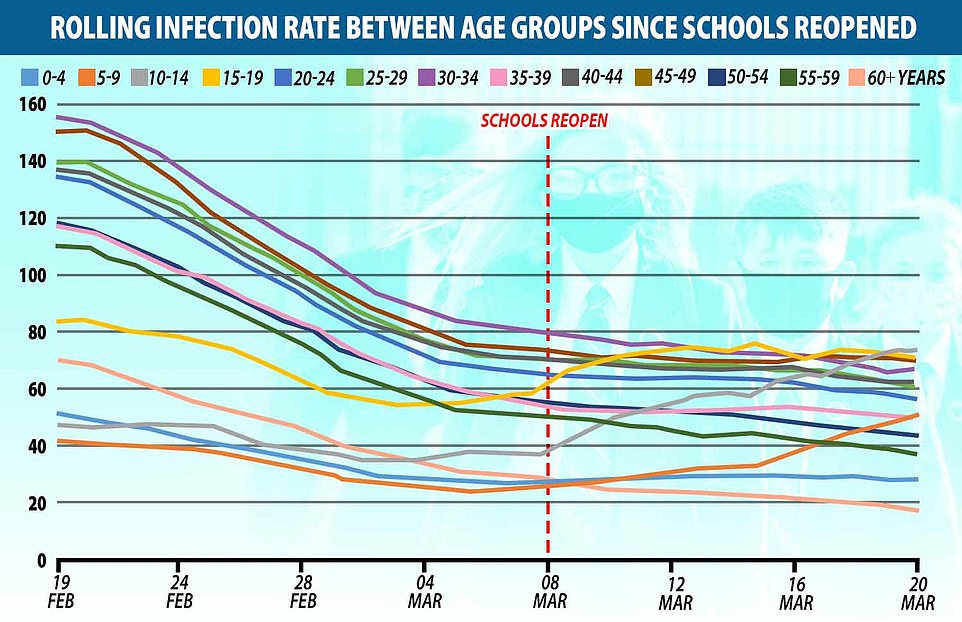 Coronavirus cases are dropping in all age groups other than children and teenagers in the United Kingdom since schools reopened in England on March 8, dismissing fears cases would balloon in the wider population once children returned to classrooms

Department of Health figures, presented to the public as a heatmap (pictured), show the Covid infection rate has only risen in children and since March 8. Graph shows: The the rate of people with at least one positive Covid test result per 100,000 population in the rolling seven-day period in age groups moving up each bar in five-year brackets 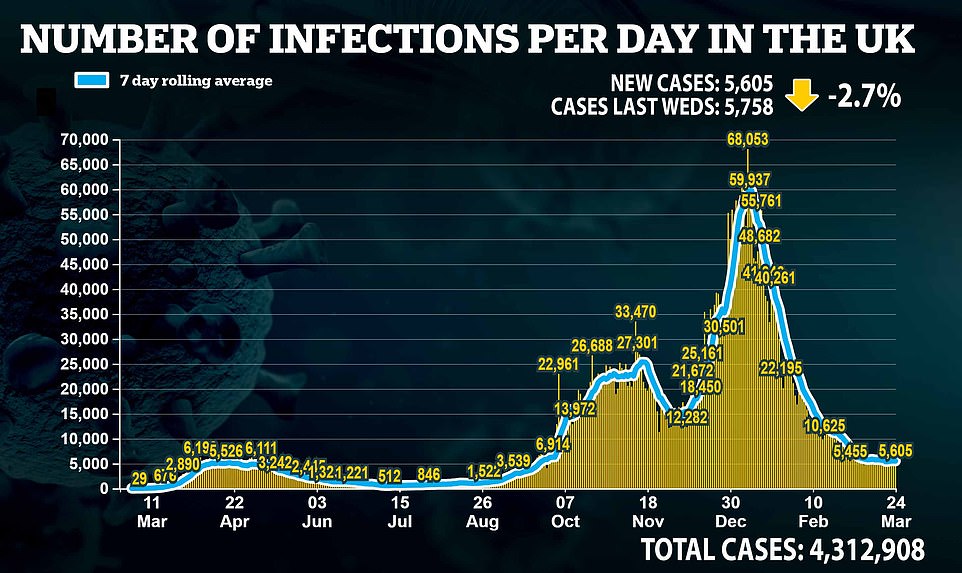 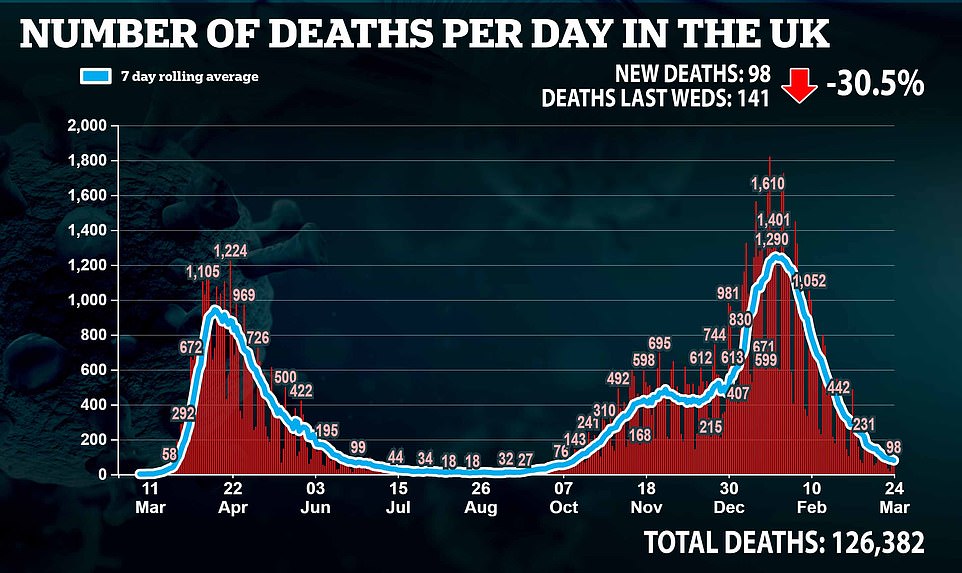 Covid cases are ONLY going up in children: Official data shows slight uptick in infections in youngsters… but only because of mass testing drive to reopen schools

Coronavirus cases are only going up in children and teenagers, according to Government data that allays fears about England’s plateauing outbreak in the face of schools reopening.

Millions of extra Covid swabs have been carried out since March 8 as part of No10’s drive to reopen classrooms, which experts warned would inevitably lead to a spike in positive tests.

But ministers have yet to witness any dramatic spike in the size of England’s epidemic, paving the way for Boris Johnson to continue with his plan to relax lockdown on April 12 to allow shops and pub gardens to reopen.

England’s outbreak has stabilised over the past fortnight, with the nation now recording around 5,500 cases per day. But the test positivity rate – a more accurate way to measure an outbreak when swabbing is ramped up – has continued to fall.

Department of Health figures, presented to the public as a heatmap, show the Covid infection rate has only risen in four age groups since the first lockdown-easing step – all of which are children and teenagers.

Dr Simon Clarke, associate professor in cellular microbiology at the University of Reading, said it suggested that the reopening of schools has yet to trigger the spike in cases that experts have warned would likely happen.

He said: ‘Experience from the summer tells us that opening schools will not result in an increase in cases among adults for around four weeks.

‘An increase is to be expected but it’s the size and the scale of it that which will affect policy.

‘The Government’s plan to open lockdown at each stage is based on a review of the data at four weeks, so I would expect the April 12 date not to be pushed back.

‘Cases haven’t exploded and my understanding is that people are happy with the current numbers.’