Cristiano Ronaldo could snap up £12.2m palace in Saudi Arabia

The life of luxury that awaits Cristiano Ronaldo in Saudi Arabia: Star player could snap up £12.2m palace complete with Olympic-size swimming pool and bask in 50C temperatures in a gated compound shielded from the religious

Cristiano Ronaldo and his family will enjoy a life of luxury in the sun if he moves to Saudi Arabia to become one of the Islamic country’s highest profile residents.

The Portuguese striker is set to be warmly welcomed by rulers of the desert Kingdom who are desperate to make Saudi Arabia more appealing to Western visitors.

Ronaldo, 37, is reported to be on the verge of signing up for the leading Saudi football club Al Nassr in a golden deal which will net him an estimated £175million a year.

The move is set to see him become an ambassador for Saudi Arabia’s bid to host the World Cup in 2030, following in the footsteps of David Beckham who controversially promoted Qatar in this year’s finals. 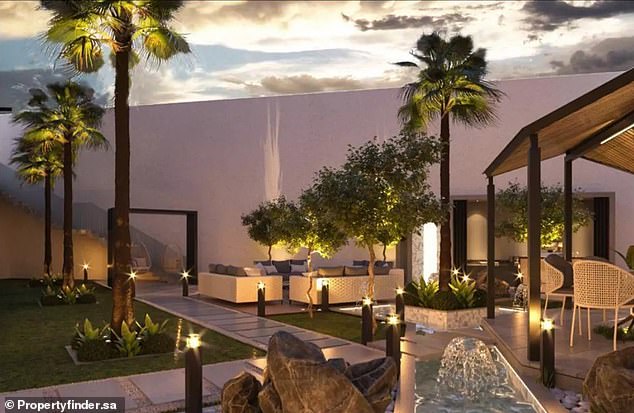 Cristiano Ronaldo and his family will enjoy a life of luxury in the sun if he moves to Saudi Arabia to become one of the Islamic country’s highest profile residents. Pictured: A property in Riyadh which is on the market for £12.2million and could be potentially bought by Ronaldo 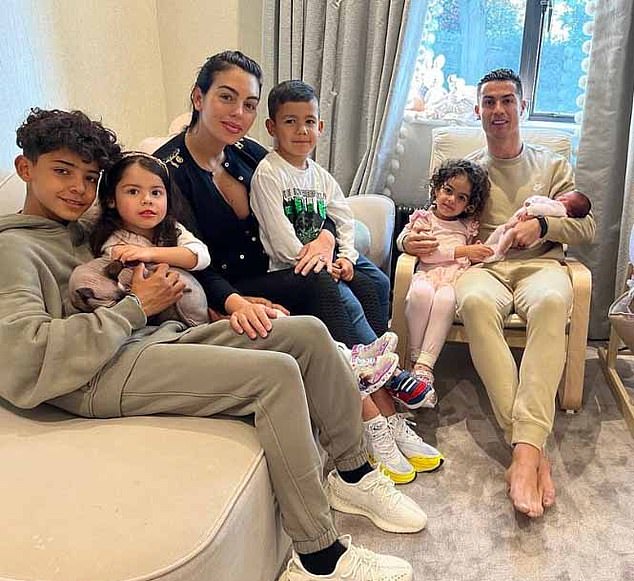 Ronaldo, 37, (pictured with his family) is reported to be on the verge of signing up for the leading Saudi football club Al Nassr in a golden deal which will net him an estimated £175million a year

The father-of-five and his long term partner Georgina Rodriguez are expected to live as ex-pats in a Western compound or palace, largely cushioned from the Conservative country’s strict Islamic laws.

Al Nassr which is based in the Saudi capital Riyadh targeted the legendary forward after his contract with Manchester United was terminated earlier this month due to him slating the club in his bombshell interview with Piers Morgan.

Riyadh is known as one of Saudi’s most Conservative cities where locals observe prayers five times a day, while summer temperatures can soar to over 50C and dry winds can often bring a haze of sand.

While it was once famed chiefly for its palm trees and dates, the city has now become a sprawling metropolis with skyscrapers and glitzy air conditioned shopping malls, alongside tree-lined avenues and ancient mosques.

The city is currently boasting what it describes as its Riyadh Season, featuring cultural attraction including concerts and plays, a Winter Wonderland theme park, a toy festive, a Perfume Expo and a celebration of local crafts.

In a softening of Saudi Arabia’s traditional reluctance to embrace other religions, this winter is the third year that shops have been permitted to publicly display Christmas decorations, and to celebrate other religious festivals

If his move goes ahead, Ronaldo and his family are likely to live in one of the city’s prestigious neighbourhoods, such as Al Muhammadiyah which is known for its top-end restaurants or Al Nakheel which is popular with families due to its international schools. 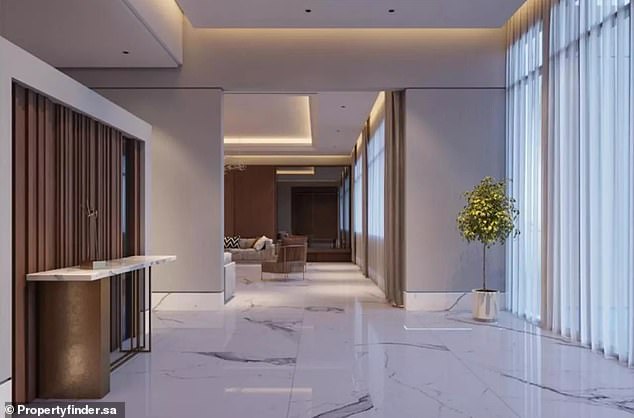 The Portuguese striker is set to be warmly welcomed by rulers of the desert Kingdom who are desperate to make Saudi Arabia more appealing to Western visitors. Pictured: An interior shot of the eight bedrroms compound in Riyadh that the Ronaldo family could live in 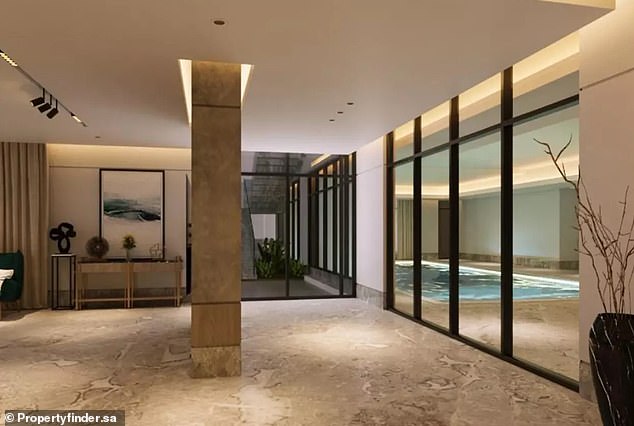 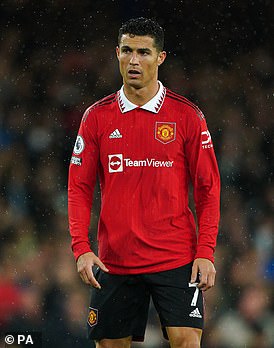 Both areas are close to Al Nassr’s 25,000-seat stadium at Mrsool Park, formerly known as the King Saud University Stadium, and boast a large number of high-end gated compounds, built for Western residents.

Many feature their own swimming pools, pre-schools, shops, clinics, gyms and restaurants meaning residents hardly every have to leave.

They can live behind their walls, largely shielded from the Mutaween religious police who ensure that mainstream Saudi society is ruled under Sharia law, but have been stripped of much of their power in recent years.

The compounds allow expats to indulge in weekend get-togethers with fellow Westerners behind closed doors, although alcohol is banned as it is throughout Saudi Arabia.

Property rental websites in Saudi Arabia do not list any high-end rental compound properties as they tend to be let out through private agreements with employers of expats.

But properties currently for sale in Riyadh include an eight-bedroom palace priced at 55 million Saudi Riyal (£12.2million) which includes an Olympic-sized swimming pool and a reception foyer with waterfall-features and three additional villas in its grounds.

The palace which could sit alongside Ronaldo’s reported portfolio of eight other properties around the world is in the Al Macqa neighbourhood just three miles from Mrsool Park, and includes accommodation for maids and chauffeurs.

While Ronaldo is likely to be greeted with open arms everywhere he goes, his partner Georgina, an Argentine-born Spanish model, is sure to find life more restrictive in Riyadh than it is in the footballer’s wives enclave in Cheshire where they most recently lived. 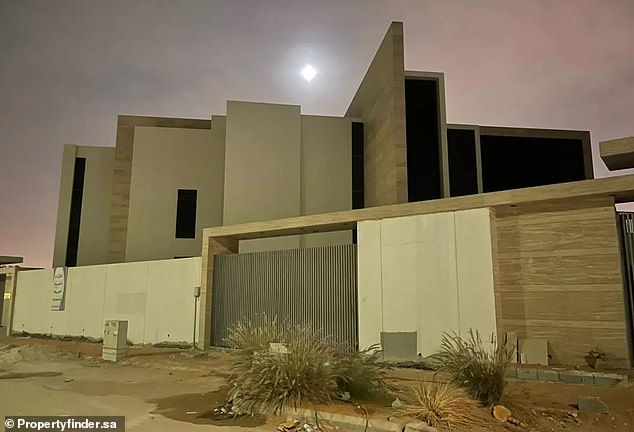 The compounds allow expats to indulge in weekend get-togethers with fellow Westerners behind closed doors, although alcohol is banned as it is throughout Saudi Arabia

The website www.expatarrivals.com states on its pages relating to the Kingdom: ‘Expat women in particular may struggle to adjust to life in Saudi Arabia especially if moving there as a trailing spouse.

‘Many of the freedoms they enjoyed back home are far more limited in Saudi Arabia.

‘The best way to blend in and not attract unwanted attention when out in public is to wear an abaya (a long flowing black robe) over clothes.

‘Women aren’t obligated to wear an abaya by law, but public decency laws do specify that knees and shoulders should be covered in public.’

Referring to life in compounds, the website states: ‘The restrictive rules of normal Saudi life can feel far away within these secluded neighbourhoods.

‘The Mutaweek (religious police) seldom enter and expats have more opportunities to foster relationships with fellow expats that ease the transition.

‘Women can also socialise freely inside compounds and there are no restrictions on what to wear.’

Ronaldo – who is currently in Dubai – was linked with Al Nassr before this year’s World Cup finals, but refused to comment on any move as he was focused on the tournament.

He was pictured in tears after Portugal were beaten 1-0 by Morroco in the quarter finals of the World Cup. He had started the match on the bench and came on in the 51st mnute.

Sports website Marca revealed this week that Al Nassr want to sign Ronaldo before the end of the year. The lucrative deal will reportedly keep him at the club until at least 2025 and could be extended. 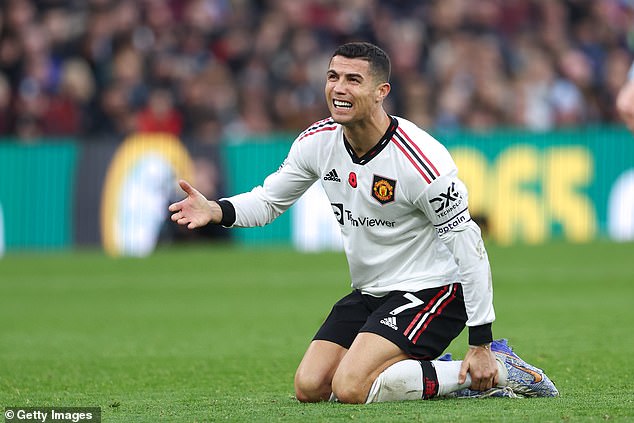 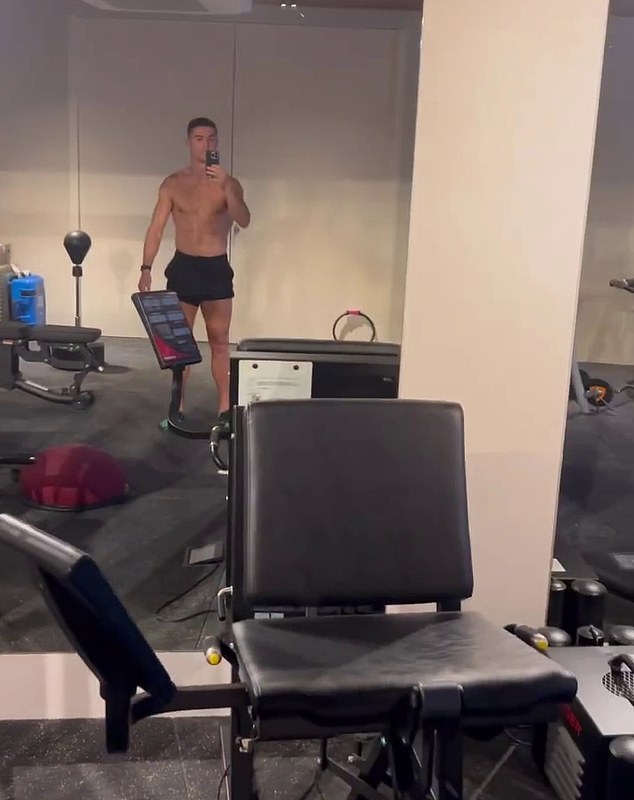 Ronaldo and his family are said to be waiting in Dubai until the deal – which includes advertising agreements – is finalised.

He shared a video of himself in the gym in Dubai this week while he reportedly waits for the deal to be agreed.

Al Nassr are one of the most successful clubs in Saudi Arabia, having being crowned winners of the country’s top flight nine times, with their most recent triumph coming in 2019.

The club managed by Frenchman Rudi Garcia, who has previously coached Roma, Marseille and Lyon also won the Saudi Super Cup in 2020 and 2021, despite struggling to make a splash on the global scene.

Their only Club World Cup appearance came in the 1999-2000 season, where they played against one of Ronaldo’s former clubs, Real Madrid, and lost 3-1.

They went on to beat Raja Casablanca 4-3, but lost 2-0 to Brazilian side Corinthians as they missed out on a place in the knockout stages of the competition.

‘It would benefit the league, the sports eco-system in Saudi and it will inspire the youth for the future. He’s a role model to a lot of kids and has a big fan base.’

Ronaldo parted ways with Manchester United after giving an explosive interview to Piers Morgan that saw him criticise the club, Erik ten Hag and the Glazer family which owns the club.