A CHEEKY dad declares victory over his 'petty' neighbours by hanging a huge banner with a smiley face on his pigeon shed after a two-year planning battle.

Alastair Leggate, who keeps pet birds in his garden, has become a local celebrity with his "tongue-in-cheek" sign which read: "Great news, permission granted". 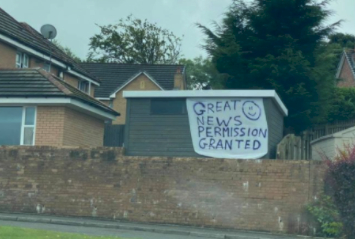 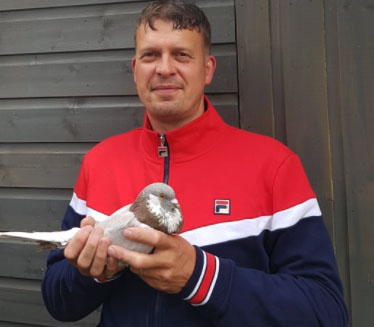 The 46-year-old from Hamilton, Scotland, has been locked in a two-year-long battle with his neighbours over his shed.

But after constant anonymous complaints to the council, the pigeon lover was granted permission for the structure.

Alastair, who works as a joiner, built his shed in August 2019 and it became home to two pigeons that were given to him by a friend.

He told Daily Record: "A pal of mine, who keeps pigeons, me gave me a pair of pigeons just as pets which I keep in the shed and I've got three kids, so they kept some rabbits in there. That was fine, there was nothing said about it.

But then in 2020 an environmental health officer turned up on the dad-of-three's doorstep.

"They said that a neighbour had complained about the pigeons. The council did a full inspection and said there's no problem, everything is nice and clean and tidy, they're only two pigeons and signed it off."

But then in January 2021 the council got back in contact with Alastair after complaints were raised over a "large structure" that had been built in his garden.

He was forced to apply for planning permission – despite building the shed over a year ago.

The council received 11 complaints about the shed, Alastair said: "All the people round about us don't have any issue. I’m good pals with all my immediate neighbours and they said they had no problem after a letter was sent around about it from the council."

Last week, while on holiday in Blackpool, Alastair learned that the council had granted him permission to keep the shed and his pigeons.

To celebrate, he covered the shed in the banner as a message to whoever complained.

"The sign was a bit of tongue and cheek because I don't know who complained. If someone had come to the door I would have compromised but it's just ridiculous," he said.

He said he had a neighbour drop some flowers through his door after his banner cheered him and his wife up.

Other locals have shouted "well done" over the wall.

Alastair, who was struck down with coronavirus and was furloughed during the pandemic, the sign was a bit of run after a "rotten" year.

He said that after the turbulent year, the last thing he needed was hassle over a shed.