London: European leaders have given themselves sweeping powers to block crucial coronavirus vaccine shipments to Australia in a ploy condemned as unethical, dangerous and selfish.

The new export restrictions, unveiled overnight Australian-time, grant the European Union final say on whether jabs produced on the continent by pharmaceutical giants Pfizer and AstraZeneca can leave the territory. 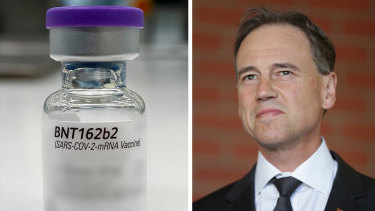 Pfizer is set to begin shipping at least 80,000 doses per week from Belgium to Australia next month, rising to a total of 10 million throughout the year.

Australia is also expecting 1.2 million doses of the AstraZeneca vaccine from Europe while manufacturing of that vaccine ramps up in Melbourne.

That number has already been revised down from the previously expected 3.8 million due to the global supply problems.

The EU’s export scheme will be in place until at least the end of March, raising the prospect that Australia’s early deliveries could be impacted.

“If a war starts where one will try to ban either the final product of the [raw materials] from free trade, that would create a situation that is not good for anyone.”

The Archbishop of Canterbury, Justin Welby, said on Twitter the EU should be focussed on “solidarity”.

“Seeking to control the export of vaccines undercuts the EU’s basic ethics,” he said. “They need to work together with others. ”

The EU described the export controls as a “transparency and authorisation mechanism”. The regulation underpinning the measure states it is not the intention of the EU to “restrict exports any more than absolutely necessary”.

While the EU would be unlikely to block shipments to Australia, its threats could at the very least pressure the pharmaceutical companies into reserving more doses for the bloc at the expense of third countries.

Pfizer has been exploring whether some or all of Australia’s 10 million doses could be made in the United States instead of Europe should the situation there deteriorate.

The EU’s approach prompted an outcry from a host of experts and officials who said it represented a dangerous precedent in so-called ‘vaccine nationalism’.

It was also viewed as an attempt by the bloc to find a culprit for its trouble-plagued rollout, which is lagging well behind the UK.

“Regardless of how these measures are calibrated, today’s announcement sends a dangerous signal to the world as we seek to recover together from the coronavirus pandemic,” said Denton, an Australian lawyer and businessman.

“And one that risks sparking retaliatory action that will stifle global medical supply chains, undermine vaccine production and prolong the pandemic.”

“The protection and safety of our citizens is a priority and the challenges we now face left us with no other choice but to act,” he said.

“This is a race against the clock and we cannot lose times because of vaccines not being delivered on agreed schedules.”

While the EU is unhappy with delays from the German drugmaker Pfizer, its fury is mostly aimed at the British-Swiss firm AstraZeneca.

Brussels suspects vials produced in Europe have been sent to the UK at the expense of the EU but has offered no evidence to support this claim.

The EU has demanded access to tens of millions of doses manufactured in Britain to make up for its expected shortfall over the coming weeks.