Iraq’s interior ministry said that Kadhimi’s residence had been targeted by three drones, two of which were shot down. According to photographs distributed by Iraqi state media, at least one projectile hit the Prime Minister’s home directly. 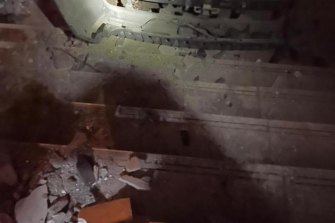 The damage caused by the drone attack at the home of Iraq’s Prime Minister Mustafa al-Kadhimi.Credit:AP

The attack marked a major escalation in a campaign of drone and rocket strikes on targets in Iraq as armed groups use violence to raise the stakes of political decisions that threaten their interests. Censure followed swiftly.

Iraqi President Barham Salih called the attack a “dangerous transgression”. The United Nations said it condemned it in “the strongest terms”.

And President Joe Biden called on the “perpetrators of this terrorist attack” to be held accountable. “I have instructed my national security team to offer all appropriate assistance to Iraq’s security forces as they investigate this attack and identify those responsible,” Biden said in a statement.

“The United States stands firmly with the government and people of Iraq as they strive to uphold Iraq’s sovereignty and independence.”

“He strongly condemned the attack on the Prime Minister’s home in Baghdad and offered his sympathies to those injured,” Johnson’s office said following a call between the pair.

“He made clear that the UK stands by the Iraqi people and supports Prime Minister Khadimi’s efforts to form a government following elections, which is vital for the long term stability of Iraq.”

Iraq’s military described the strike as a failed “assassination attempt.” It was not immediately clear whether the drone had been intended to land as closely to the residence as it did.

Video footage from the Prime Minister’s compound showed that a vehicle in the parking lot had borne the brunt of the explosion.

The attack came as Iran-linked groups intensify pressure over an October 10 election result that saw their political alliance suffer surprising setbacks. It won the largest share of the vote but its share of the country’s 329 parliamentary seats dropped by almost two-thirds. 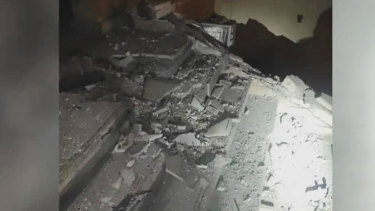 The aftermath of an assassination attempt at the home of Iraq’s Prime Minister Mustafa al-Kadhimi in the heavily fortified Green Zone in Baghdad, Iraq.Credit:AP

The lion’s share of the seats went to the party of Shiite cleric Moqtada al-Sadr and the populist leader’s recent moves have suggested that he may be preparing to agree to a government that marginalises parliament’s main Iran-backed alliance, known as Fatah.

On Friday, the alliance’s supporters clashed with security forces outside Baghdad’s fortified Green Zone complex, home to Kadhimi’s residence and the US Embassy.

Two people were killed when security forces opened fire on the protesters, who had rallied under a campaign which calls itself ‘Stop the Steal,’ in reference to the election. 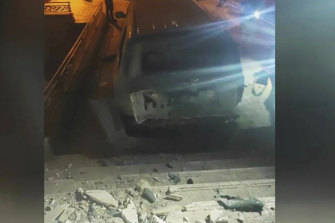 At least 125 others were wounded, most of them riot police, after the gathered protesters hurled rocks that they had pulled out from the sidewalk.

Sunday’s drone strikes, which were heard throughout central Baghdad in the early hours of the morning, caused tensions to spike even further.

Kadhimi’s office said that he had been unharmed by the strike, although several members of his security detail were wounded. But in video footage of the Prime Minister, who addressed the nation shortly after the attack, the faint outline of a bandage appeared to be visible below his white shirt.

Photographs from his residence showed that the drone had come close: Doors and windows to the premier’s home had been blown in.

No one has claimed responsibility for the attack, but Iraqi and western officials have blamed previous attacks of a similar nature on Iran-linked paramilitaries in Iraq. 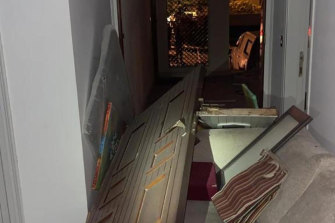 The damage of the drone attack at the home of Iraq’s Prime Minister Mustafa al-Kadhimi.Credit:AP

These have targeted US-linked installations and Iraqi intelligence headquarters, but never the office of a senior official. The Iran-linked Kataib Hezbollah militia group is also accused of attempting to intimidate Kadhimi, who came to office vowing to rein in the paramilitaries’ influence, by assassinating one of his confidantes, the scholar and researcher Hisham al-Hashemi, last year.

A coalition representing many of the parties who lost out in the October 10 election, including representatives of the militias, condemned the attack but claimed it was the work of unknown forces trying to sow chaos.

In a video published by his office Sunday, Kadhimi was seem chairing a meeting of his security commanders about the overnight attack.

“The cowardly terrorist attack that targeted the home of the Prime Minister last night with the aim of assassinating him, is a serious targeting of the Iraqi state by criminal armed groups,” his office said in a statement.

The violence leaves Iraq in a dangerous moment as politicians and armed groups scramble to work out their next steps.