Seoul: Survivors of a South Korean tour boat sinking in Budapest say they were lucky to grab onto a drifting lifeboat as they looked in horror at others who struggled in the dark, rainy waters, shouting for help.

Only seven among 35 people were rescued after the boat, the Mermaid, sank on Wednesday night, Budapest time. Seven others have been confirmed dead and 21 are still missing. 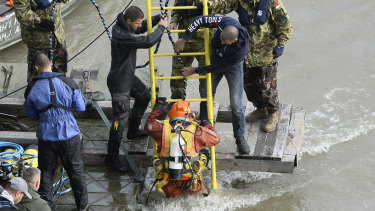 Rescuers descend a ladder to find the boat’s wreckage. Credit:AP

Survivors said their small boat had almost finished its hour-long night tour of the Hungarian capital, and had almost come to a stop when a larger cruise ship hit it under the bridge, near the Parliament building. They said about 20 people were on the deck taking photographs or preparing to disembark, while others were in the cabins.

"I saw that big cruise ship coming closer to us but I had never imagined it would ram our boat," said Jeong, a 31-year-old South Korean.

Jeong told South Korea's Yonhap news agency she and others on the deck were thrown into the cold Danube waters by the impact of the collision. Police said it took only seven seconds for the boat to overturn and sink.

She said she saw a lifeboat drifting near her and managed to get hold of it. She threw a rope to another South Korean tourist, Yoon, who was close to her.

"Our boat was turned over in an instant and began sinking," Yoon, 32, told Yonhap. "All those on the deck fell into water and I think those staying in the cabin on the first floor couldn't probably get out of the ship swiftly."

While holding onto the lifeboat together, Jeong and Yoon said they shed tears when they saw the heads of other people coming up and down in the fast-moving river.

"The people plunged into the river in the darkness and shouted 'Help me!' while floundering in the waters. But I couldn't do anything for them," Jeon said, crying.

Another survivor, Ahn, 60, said a crew member of another tour boat sailing nearby extended a hand to him after he was tossed into the river. But he lost grip and was carried away by waters before he managed to hold onto a drifting plastic object. 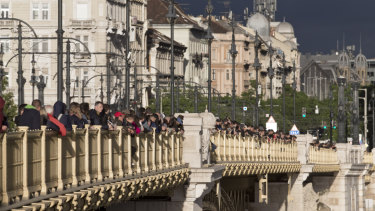 People have gathered at the Margit bridge on the Danube to watch the rescue crews.Credit:AP

Yoon said rescuers were only able to pick up those who were in the lifeboats or clinging to them, or who held the hands of people from other boats nearby.

Yoon said the cruise ship that rammed the boat continue sailing without attempting to rescue anyone.

Police launched a criminal investigation and late Thursday detained and questioned the Ukrainian captain of the cruise ship. The 64-year-old man is suspected of endangering water transport leading to the deaths of at least seven people.

Hungary's state TV reported six people who had been rescued had been discharged from hospital, while one being treated for broken ribs remained there.