London:The British government conceded it was considering keeping children from returning to classrooms next week as daily infections continue to rise in record numbers.

The UK is battling to suppress a variant of COVID-19 that is spreading faster than previous versions of the virus. More than 41,000 new infections were recorded on Monday, placing intense pressure on hospitals and frontline workers.

Some of those cases were reported amongst soccer players and staff at Premier League football club Manchester City forcing the postponement of their match against Everton which had been scheduled for Tuesday morning AEDT.

A further 357 people died, having tested positive for the disease in the last month.

The number of patients being admitted to hospital was poised to rise beyond the peak of the first outbreak in April, as 21,286 people are already currently being treated.

The government is so alarmed about the rapid spread of the mutated virus that it placed south-east England and London under tough new restrictions which banned households mixing on Christmas Day. 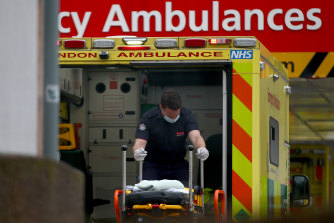 Ambulance callouts have also increased as the number of coronavirus patients in hospital is also set to break records. Credit:Getty Images

But cabinet minister Michael Gove said it was the government's plan "at the moment" to allow primary students to return to the classroom next week along with two years of secondary students. The remainder is scheduled to return the week after.

"It is our intention to make sure we can get children back to school as early as possible," Gove told Times Radio.

"We are talking to teachers and headteachers in order to make sure we can deliver effectively. But we all know that there are trade-offs. As a country we have decided — and I think this is the right thing to do — that we prioritise children returning to school.

"But we have a new strain and it is also the case that we have also had, albeit in a very limited way, Christmas mixing, so we do have to remain vigilant."

Last week the Department for Education said that "the balance of risk is now overwhelmingly in favour of children returning to school".

But it was reported by the Politico website that the government's official scientific advisory body had urged the government to keep secondary classrooms shut.

Some of the scientists who sit on that body (the Scientific Advisory Group for Emergencies) made the same recommendation in a paper for the London School of Hygiene and Tropical Medicine, that even though there is no evidence that the variant causes more serious disease, the increase in transmissibility is likely lead to more cases, hospitalisations and deaths.

"Our estimates suggest that control measures of a similar stringency to the national lockdown implemented in England in November 2020 are unlikely to reduce the effective reproduction number … to less than 1, unless primary schools, secondary schools, and universities are also closed," the scientists said. Their paper has not yet been peer-reviewed.

Medical workers pleaded with the public to obey the restrictions.

"Our nurses and doctors are incredibly stretched caring for very sick patients," she said in a tweet. "No-one should underestimate the impact the infection can have."

The London Ambulance Service said it normally accepts around 5000 calls on a typical busy day but had received 7000 on Sunday.

as, classroom, debate, On, return
Celebrities