Wuhan: For people living in Wuhan this January, a year after the world’s first coronavirus lockdown came into place, déjà vu hangs in the foggy, winter air.

China is battling its most severe outbreak of the coronavirus in 11 months – more than 2000 cases over the past five weeks, with at least three from the new British variant, not including asymptomatic positives. Infections are primarily clustered around cities in north-east China, more than 1000 kilometres away from Wuhan. 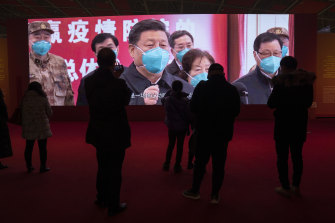 Residents attend an exhibition on the city’s fight against the coronavirus in Wuhan on January 23, a year after it was locked down to contain the spread of coronavirus.Credit:AP

But the city where coronavirus first erupted in late 2019 is taking zero chances. Authorities have reintroduced restrictions, limiting bars and restaurants to 75 per cent capacity and banning large group gatherings.

Posters with pandemic tips that had been torn down are going back up, reminding passers-by to wash their hands regularly and stand at least one metre apart. Bins for face mask disposal are again perched on street corners.

“For us Wuhan residents, we’ve already been through this,” said Wang Hui, 37, a chauffeur. He’s been tested for COVID-19 so many times – always negative – he’s lost count. “This is just the way it is.” Social distancing may be a nuisance, but it beats the alternative – complete lockdown. Saturday marked exactly a year since Wuhan residents were sealed in their homes for 76 days, confused and scared by a mystery virus killing their neighbours and relatives. Even before the latest virus flare-up, many were wary of surprise outbreaks and have been happy to keep exercising precautions.

Wang, for instance, is due to receive a vaccine – prioritised by the government as his job means coming into contact with different people daily. “I’ll get the jabs, but after that I’ll still wear a face mask.”

Ms Ma, a shop attendant, half-joking, jumped away when this reporter from Beijing approached. The capital city is rushing to mass test residents after finding transmissions in some neighbourhoods.

“Ah, stay far away from me!” she said, describing how a friend living in one of Beijing’s affected districts was recently ushered into quarantine upon arriving in Wuhan.

“We have to stay vigilant,” said Ms Qin, 55, while walking her two dogs. “I still don’t take the subway these days; it’s way too crowded and I’m scared of the risks.”

Most people are doing their best to live with this new normal, slipping face masks below their chin to slurp spicy sesame noodles, a speciality, and shouting over loudspeakers triumphantly proclaiming Wuhan a “heroic city”, followed by reminders to ventilate indoor spaces.

“We aren’t exactly relaxed about the situation,” said Mr Li, 52. “But we do have to find ways to live with the stress.” For him, that means enjoying a cup of aged pu’er tea in his teahouse – a new location with cheaper rent.

The resurgence is alarming for Beijing a few weeks ahead of Chinese New Year, a travel period that ramped up infection spread across the country last year. This year, authorities have urged its 1.4 billion people to stay put.

It also comes as Beijing is eager to tout containment success and export its vaccines – a way to deflect growing global anger over its mistakes, which some health experts say may have exacerbated the pandemic. 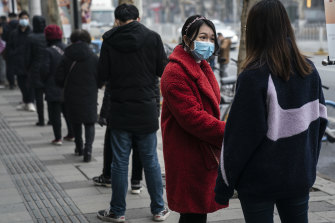 Residents wear masks while queuing to buy milky tea in Wuhan on the first anniversary of lockdown.Credit:Getty Images

A massive new exhibition in Wuhan boasts of victory in what Xi Jinping, the Chinese Communist Party leader, called the “people’s war” against the virus.

Visitors walk through China’s official narrative, which sources all virus achievements to Xi and praises him for pulling the country out of misfortune, making zero mention of missteps.

But there’s no mention of key figures – Ai Fen, punished for being one of the first doctors to sound the alarm, or Zhang Yongzhen, the virologist who mapped and shared the genome publicly without official permission.

Whistleblower doctor Li Wenliang appears near the end on a wall of martyrs, but the sign omits that he was reprimanded by police after warning colleagues about a virus from which he later died.

Chinese government officials have stopped saying “lockdown”, instead using the euphemistic term “wartime measures” to mean the quarantine of millions, which occurs even if only a handful of infections are discovered. “Wuhan is the safest city in the world,” agrees Ma Lianping, 32, who owns a noodle shop across the street from Jinyintan Hospital, one of the first in the world to start treating coronavirus infections.

“I don’t really know about the government’s figures,” said a man running a funeral goods shop across from a crematorium. At pandemic peak, he saw dozens of corpses transported daily to be burned, more than the 10 or so a day now.

A few blocks from Wuhan Central Hospital, where Dr Li worked and later died, a cafe has on its menu “the whistleblower coffee – a 100 per cent controversial drink”.

More than 40 clinics in Wuhan have started administering vaccines. Nationwide, 15 million doses have been given, enough for about 1 per cent of the population.

But some in Wuhan are again bedding in for the holiday. “No, I don’t trust the vaccine. It was developed based on last year’s virus,” said Mr Li, a taxi driver slated to receive a vaccine. “Now, new variants are circulating.”