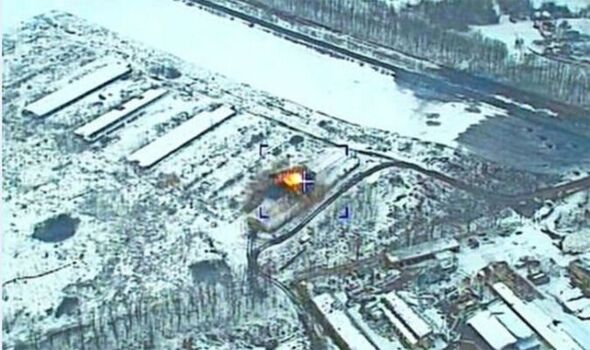 It came as Boris Johnson called the conflict “a turning point for the world”. The missiles, which the West does not possess, cannot be stopped by any current defence systems. The Ministry of Defence said Putin had been forced to change his approach and “pursue a strategy of attrition” after failing to capture any major city.

This would lead to “indiscriminate use of firepower” and “increased civilian casualties”. One expert said using the Kinzhal was a “signal to the West”.

Dominika Kunertova, at the Centre for Security Studies in Zurich, also said it was “a sign of showmanship”.

Others said it could be a warning that Putin is escalating the war – and could use chemical weapons next. Mark Galeotti of the Henry Jackson Society said: “Putin needs cities in the bag as hostages or bargaining chips, and we should expect an escalation this week as he strives to achieve this.

“This may include the use of chemical weapons, though I’m sure he will consider the fact that using them may thwart any chance of a settlement. Though he will continue to strike it, Kyiv is now beyond his grasp, as is any hope of installing a puppet regime.”

The hypersonic missiles are so dangerous because of their speed and manoeuvrability.

Russia’s defence ministry said the Kinzhal missile has a range of more than 1,240 miles and with MiG-31s recently sent to Kaliningrad, numerous European capitals are now within reach. A hypersonic missile is one which travels faster than Mach 5 – nearly 4,000mph – or five times the speed of sound.

Referring to the ongoing conflict, Mr Johnson, speaking at the Conservative Party’s spring conference in Blackpool yesterday, said: “This is a turning point for the world. And it’s a moment of choice. It’s a choice between freedom and oppression.”

He said Putin’s invasion was motivated by fear that a successful Ukraine would trigger a pro-democracy revolution in Moscow.

But the West had chosen to stand up to Russia rather than “making accommodations with tyranny”, he added.

And he said of Putin: “He has been in a total panic about a so-called colour revolution in Moscow itself. That is why he is trying so brutally to snuff out the flame of freedom in Ukraine – and that’s why it is vital he fails.”

In Russia, an officer from the FSB security service warned that Putin’s war machine was likely to run out of money by June.

Ukraine claims more than 14,400 Russian soldiers have died and “tens of thousands more injured and maimed” since the invasion began.

The dead and wounded are reportedly being evacuated at night in trains, by planes or in convoys of military ambulances to avoid attention. And Ukraine’s General Staff said yesterday a fifth general, Lieutenant General Andrei Mordvichev, died in an artillery strike in the Ukrainian town of Chernobayevka.

Putin is thought to have ordered the occupation of at least three cities – Mariupol, Sumy and Chernihiv – at a high-level meeting with generals on Thursday.

Russian forces have already cut Mariupol off from the Sea of Azov, and its fall would link Crimea, which Russia annexed in 2014, to territories controlled by Moscow-backed separatists in the east.

Street fighting in the besieged southern port city broke out yesterday as Russian forces entered the city centre. Some 300,000 people have been trapped for over two weeks without power, water and heat.

Its Soviet-era apartment blocks have been pounded into burnt-out shells and the dead left uncollected in the streets.

Heavy shelling and fighting has also kept humanitarian aid from getting in and hampered rescue workers still searching for survivors trapped in a theatre flattened by Russian air strikes on Wednesday. On Friday, authorities said more than 1,000 were still in the basement.

Ukrainian MP Dmytro Gurin described conditions in the besieged city as “medieval” with 30 per cent of buildings being totally destroyed and 50 per cent heavily damaged.

He told the BBC’s Today programme: “Everybody is sitting in their apartments and basements thinking whether they will die in the next hour. The shelling never stops and the shooting never stops. Airplanes, they drop hundreds of bombs over 24 hours.”

Last night 6,623 people were evacuated from Ukrainian cities through humanitarian corridors, including 4,128 from Mariupol – considerably less than the 9,145 on Friday.

It is feared 150 soldiers could have died after missiles struck barracks as more than 200 slept in the southern city of Mykolaiv on Friday.

In Zaporizhzhia, another southern city and a key transit point for those fleeing Mariupol, a 38-hour curfew lasting till tomorrow morning was imposed after a Russian rocket strike killed nine and wounded 17 on Friday.

A woman and two children were also found dead under rubble after a house was shelled in the city of Rubizhne in the Luhansk region.

And a Russian mortar attack killed seven people and wounded five in Makariv in the Kyiv region on Friday, local police said.

But Kyiv is now outside Putin’s grasp, experts say, while Odessa, heavily defended by four Ukraine brigades, is also unlikely to be taken.

Justin Crump, CEO of Sibylline strategic risk group, said sanctions meant Putin had already lost the strategic war but could still make gains tactically. He added: “Both sides have fatigued themselves so much that they cannot conduct offensive operations effectively, so you have stalemate.

“But Ukrainian forces are now at their weakest – crucial new equipment hasn’t yet arrived and they will need to be trained to use it.

“If Putin cannot break through this week, he could well end up with less than he could have achieved by accepting Minsk treaty proposals.”

Heavily weighted in Russia’s favour, among those proposals would have been self-government for the breakaway regions. Since the invasion has stalled, Russian forces have been intensifying missile attacks on western Ukraine. Ukrainian President Volodymyr Zelensky yesterday offered an olive branch to Putin and called for further peace talks.

In a video address he said the Russian strategy to wear the population into submission by besieging cities will fail and Moscow will lose in the long run if it does not end its war.

He said: “The initial plan of the Russian military to seize our state failed and it seems they do not know what else can be done to us. It’s time to meet.”

At least 847 civilians have been killed and 1,399 wounded in Ukraine since the invasion, although the true toll is thought to be considerably higher, the UN said yesterday.

GORDON Brown and Sir John Major joined calls for Vladimir Putin and his underlings to be tried for war crimes at a Nuremberg-style tribunal.

The former PMs are among nearly one million people who have signed a petition calling for a system modelled on the trials of Nazi war criminals after the Second World War.

He said since the fall of the Berlin Wall “we’ve assumed that democracy and the rule of law will prevail,” but Mr Putin “is replacing that by use of force”.

He said: “If the message is not sent out now then we face aggression in other countries which may go unpunished.”

He added: “Innocent people, children, mothers are being terrorised. Bodies lying on the street in Mariupol, people not getting medical treatment.

“These are international crimes and they are crimes against humanity.”

A SENIOR European diplomat has admitted that without the “nimble” UK, the EU would not have stood up to Putin.

In a private briefing to UK journalists, the diplomat went as far as suggesting that without Brexit there could have been a different outcome in Ukraine.

The admission is a blow for Rejoiners who had argued the UK would be “a fringe country” outside the EU.

The diplomat said: “Let’s be honest we saw it with the vaccine and now with Ukraine.

“Britain outside the EU is more nimble and able to make decisions more quickly. With the coronavirus vaccine you were able to get it agreed and rolled out weeks before the EU.

“It is the same with this crisis. The UK saw the threat first and was preparing sanctions before the rest of Europe.”

The diplomat added: “Some in the EU complain that Britain is trying to bounce the EU into action too quickly. But if it had not been for that then we would be seeing the issue discussed in endless committee meetings with no resolution. Too often that’s the EU way.”