At the beginning of March, it seemed that India had the COVID-19 pandemic under control.

But a number of public events over the past few weeks have seen the virus take hold with devastating consequences.

A religious festival lasting several weeks, which began on 11 March, saw more than three million people gather on the banks of the River Ganges.

Pilgrims to Kumbh Mela, which is celebrated about once every 12 years by Hindus, believe a dip in the holy river will wash away their sins.

Regional governments throughout the country have now asked those who’ve taken part to self-isolate and get tested.

The chart below shows how the number of cases has risen as major events have been held.

The decision to allow the festival to take place has been heavily criticised.

Political rallies have also attracted large crowds where social distancing has been absent. 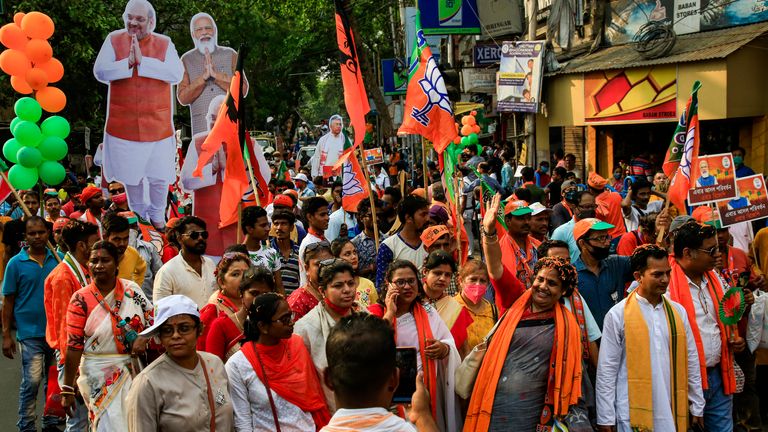 While key elections in some states have been taking place in March and April, Prime Minister Narendra Modi has continued campaigning with rallies drawing large numbers of supporters.

The rise in COVID-19 infections from these events has prompted a high court to blame the Election Commission of India for allowing the polls to go ahead during a pandemic.

The Indian government has said more than 200,000 people have died from coronavirus so far, although many believe the real figure is much higher.

The map below shows which area have been worst hit.

Maharashtra, where the city of Mumbai is located, is also seeing a steady rise in daily infections with case rates doubling every two weeks or so.

The graph below shows how case rates in the two worst hit states – Delhi and Maharashtra – compare.

Although daily cases have declined in the past few days, experts say this is largely due to a drop in testing.

Health economist Rijo M John of the Indian Institute of Management in Kerala, a southern state said: “This should not be taken as an indication of falling cases, rather a matter of missing out on too many positive cases.”