There was no party. There were no grinning players showing off the premiership cup. Missing were the hungover masses singing Oh We’re From Tigerland about 1000 times.

Instead of hosting the traditional, triumphant post-premiership family day, Punt Road Oval was forlorn, locked and empty on Sunday. 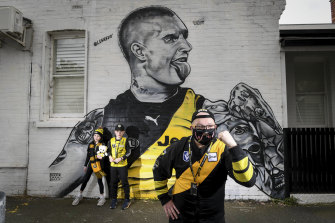 But a modest stream of die-hards headed to Richmond anyway.

They had all watched the game, broadcast from Brisbane, at home on TV, because of COVID-19 restrictions.

Now they wanted (at a safe distance) just to be near fellow devotees, and to say "Go Tiges!" and "How good is Dusty?" to fellow yellow-and-black tragics.

Mandy Woodward, 59, drove from Briar Hill, in Melbourne’s north-east, to Punt Road Oval, got her bicycle out and cycled around Richmond with a cardboard cut-out of an AFL premiership cup stuck on the handlebars. 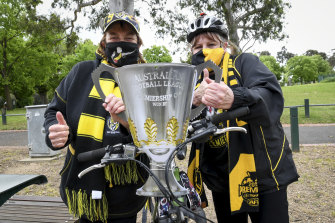 "This is where the Tigers’ spirit is," she said. "This would normally be family day and we would be down here."

She watched the grand final at home with her husband, Ken, but was on Zoom with other cheer squad members "to try and keep the spirit of game".

Still, it’s been "hard, so hard", said Ms Woodward, that she couldn’t go this year. "Last year at the MCG, I was in the front row with the floggers, and the players came over after the game and sat with us. It was so good." 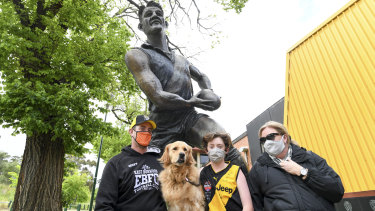 Aaron Pitt, 45, wife Tracey, 45, and son Jack, 12, drove from Blackburn South thinking they wouldn’t get a park in the small Punt Road Oval lot, but there was plenty of room. Police stood around with nothing to do.

The family took selfies with the Jack Dyer statue. Mr Pitt said they wanted to soak up some atmosphere. "It’s very quiet. It’s very subdued. But I’m really happy we came down here."

"It’s the home of Richmond. You want to have some connection, because the game wasn’t played in Melbourne."

Josh Rowe, 46, of Coburg, and his children Archie, 11, and Madeline, 9, were among those who paid their respects to "the great man", Norm Smith medallist Dustin Martin – or rather his mural in Kelso Street.

Decked out in Richmond gear, including masks and socks, and carrying a teddy named Trent Cotchin, after the Tigers’ captain, they ate their lunch while strolling down Swan Street.

"It’s to enjoy all that is Richmond," Mr Rowe said, with the added benefit of supporting "those retailers who have been doing it tough".

Police incidents in Melbourne were sharply down on last year’s grand final, when 43 people were evicted from MCG – for incidents including biting, headbutting and hitting police officers – and, later in Swan Street, flares were set off and six people were arrested.

Victoria Police said they were happy with the behaviour of about 200 people who attended Swan Street on Saturday night. One person was arrested for being drunk in a public place and was fined for failing to wear a face covering.

The most important news, analysis and insights delivered to your inbox at the start and end of each day. Sign up to The Sydney Morning Herald’s newsletter here,  The Age’s newsletter here, Brisbane Times‘ here and WAtoday‘s here.