Former British Intelligence officer Christopher Steele will meet with U.S. investigators – after multiple investigative bodies have sought the cooperation of the author of the golden showers dossier.

Steele will meet within weeks with unidentified U.S. authorities and has agreed to be questioned, a source close to him told the Sunday Times.

The news appeared just as President Trump was visiting Great Britain, where he said before his trip he might press the British government on ‘spying’ he says was conducted on his campaign. 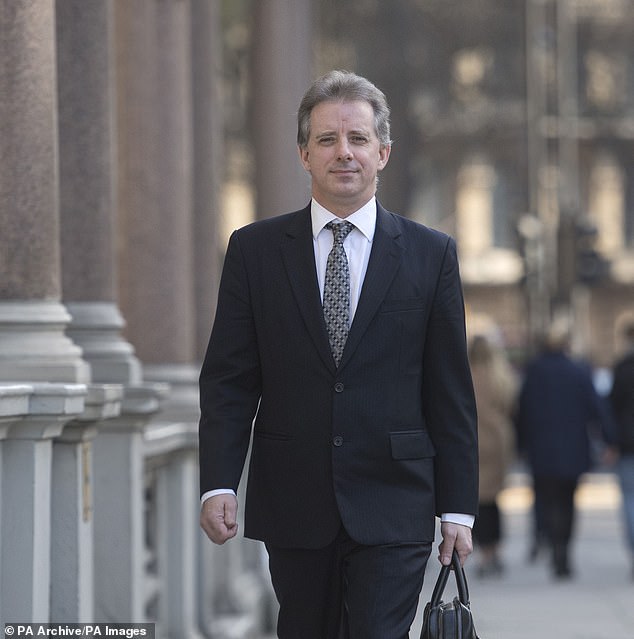 Ex-British intelligence officer Christopher Steele will meet within weeks with unidentified U.S. authorities, a source close to him told the Sunday Times.

A Justice Department Inspector General has been investigating the origins of the Russia probe, and Attorney General William Barr has tapped a U.S. attorney in Connecticut, John Durham, to conduct a separate probe, after Barr himself said spying did occur.

Steele declined requests to meet with the House Intelligence Committee, which concluded its probe last year under Republican control. GOP committee members used their investigation to try to retrace the dossier, which was provided to the FBI during the campaign.

‘The committee does not discuss’ its interviews, a panel spokeswoman told DailyMail.com, declining to provide further comment. Burr told CBS in February that committee hadn’t been able to secure a face-to-face interview, rather than settle for written responses to questions.

Burr took flack from party members after it was revealed he had subpoenaed Donald Trump Jr. to come back and discuss discrepancies with jailed former Donald Trump lawyer Michael Cohen’s testimony.

Steele wrote the dossier while working for political intelligence firm Fusion GPS. Payments came through a Democratic-affiliated law firm that did work for Hillary Clinton’s campaign, although the initial work was for a conservative web site during the GOP primaries.

The Mueller probe failed to establish evidence that Trump or his campaign conspired with the Russian government in its election hacking effort. However it did obtain indictments of members of a Russian troll farm who carried out the hacking, and researched numerous contacts between Trump campaign officials and Russians.

Among information that prosecutors unearthed is Trump lawyer Michael Cohen’s work on a Trump Moscow hotel project. Conversations continued through the summer of 2016, Cohen testified.

The report did allude to the most salacious allegations of the dossier, which also put forth raw information, some from Russian sources, claiming Trump could be subject to Russian ‘kompromat,’ or compromising information.

The Mueller report brought up the issue of the unverified allegation about Trump’s conduct in a Moscow hotel room during the Miss Universe pageant.

‘Comey’s briefing included the Steele reporting’s unverified allegation that the Russians had compromising tapes of the President involving conduct when he was a private citizen during a 2013 trip to Moscow for the Miss Universe Pageant,’ accordig to the report.

‘During the 2016 presidential campaign, a similar claim may have reached candidate Trump. On October 30, 2016, Michael Cohen received a text from Russian businessman Giorgi Rtskhiladze that said, ‘Stopped flow of tapes from Russia but not sure if there’s anything else. Just so you know… .’ … Rtskhiladze said ‘tapes’ referred to compromising tapes of Trump rumored to be held by persons associated with the Russian real estate conglomerate Crocus Group, which had helped host the 2013 Miss Universe Pageant in Russia. … Cohen said he spoke to Trump about the issue after receiving the texts from Rtskhiladze. … Rtskhiladze said he was told the tapes were fake, but he did not communicate that to Cohen,’ according to the report.

Rtskhiladze, who is in fact Georgian-American, told DailyMail.com that a friend called him after hearing someone ‘bragging’ about the alleged tapes at a Moscow party he did not attend.

He said he passed on the information to Cohen out of concern for a shared interest in the ‘Trump brand.’