Home » Dispatch audio reveals Andrew Brown was shot in back

Dispatch audio reveals Andrew Brown was shot in back

‘Gunshot to the back’: Dispatch audio reveals Andrew Brown was shot in back as seven deputies are suspended and three quit over his death – but North Carolina sheriff STILL refuses to hand over bodycam

A black man killed while driving away from sheriff’s deputies was ‘shot in the back’ as he tried to drive away, newly released audio has revealed.

Emergency dispatch audio recorded after the shooting of Andrew Brown, 42, in Elizabeth City, North Carolina on Wednesday morning included a dispatcher saying: ‘We do have a subject that was hit…

‘Be advised EMS has one male, 42 years of age, gunshot to the back.’

In audio obtained by Broadcastify, they added: ‘We do have a viable pulse at this time.’ Later on, another transmission shared that Brown, a father of 10, had suffered ‘gunshot wounds.’

Brown was struck while deputies from Pasquotank County Sheriff’s Office were executing a search warrant over a suspected drugs offense.

Neighbors Demetria Williams, who witnessed part of the shooting, said she never saw Brown carry a gun, and that deputies fired into his car as he was trying to get away from them.

He crashed his car moments later, with Williams saying she saw Brown ‘slumped’ in his vehicle as he died of his gunshot wounds.

Pasquotank Sheriff Tommy Wooten told WAVY-TV that seven deputies have been put on administrative leave following the shooting of Brown. CNN reported that another two deputies resigned and one retired as a result of the incident.

All seven were involved in executing the warrant on Wednesday morning, although Pasquotank Sheriff Tommy Wooten said not all of those suspended used their weapons. 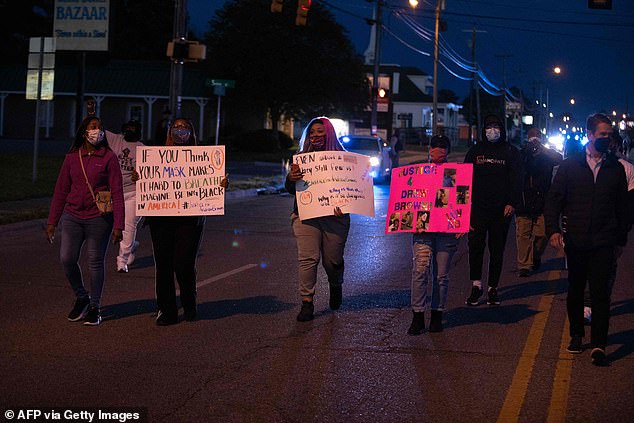 Demonstrators close a bridge into downtown as they demand the release of body camera footage of the police killing of Andrew Brown Jr. in Elizabeth City, North Carolina on Friday 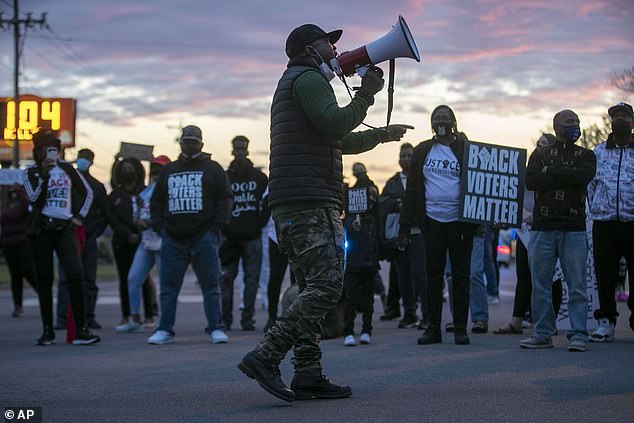 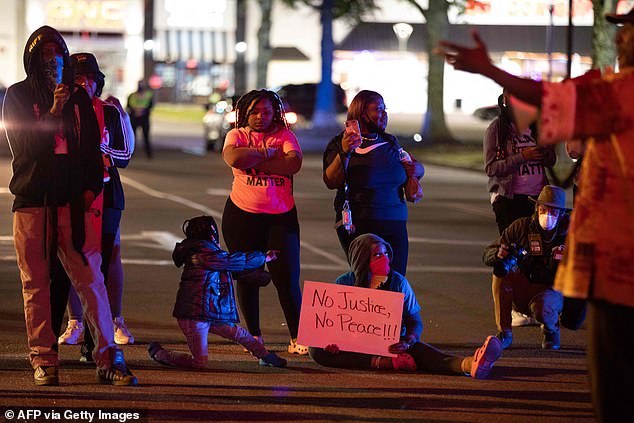 Protesters gather in Elizabeth City, North Carolina, on Friday night in the wake of Andrew Brown Jr’s shooting at the hands of sheriff’s deputies 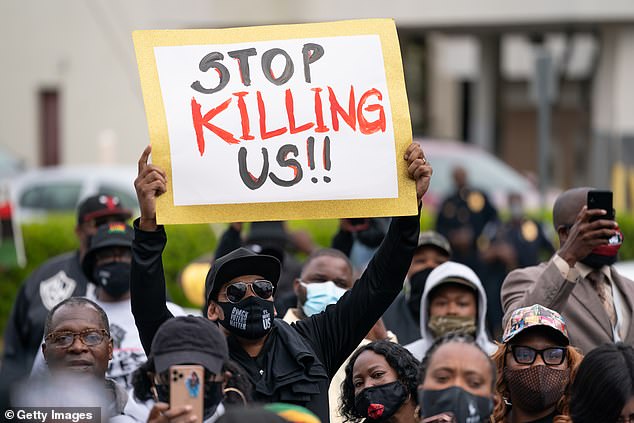 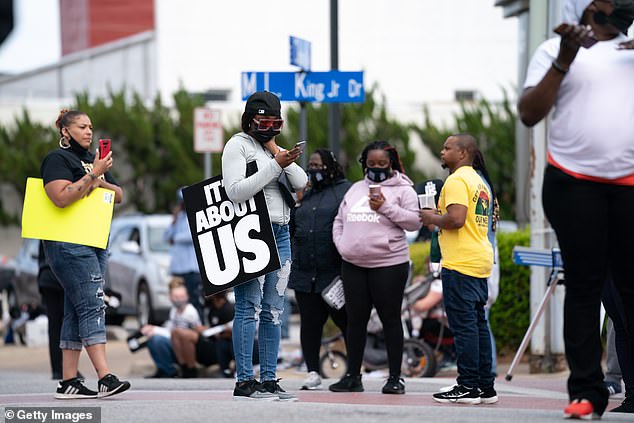 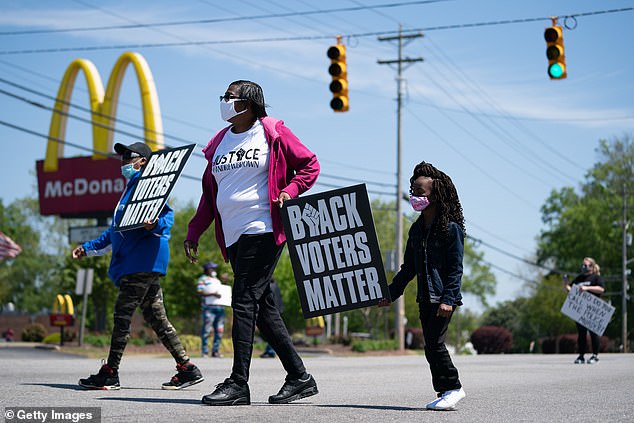 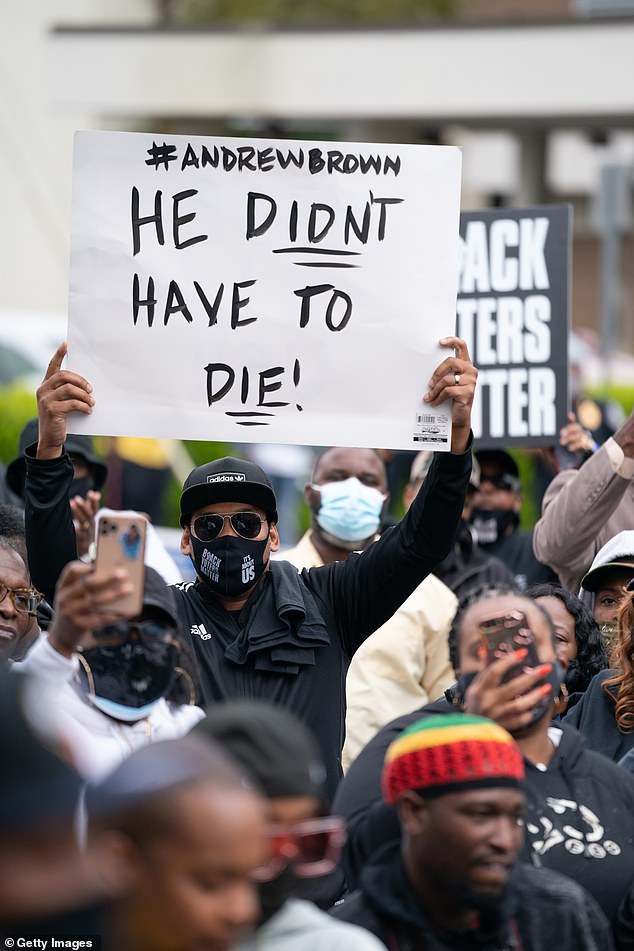 A man holds a sign that reads ‘He didn’t have to die!’ during a march for Andrew Brown 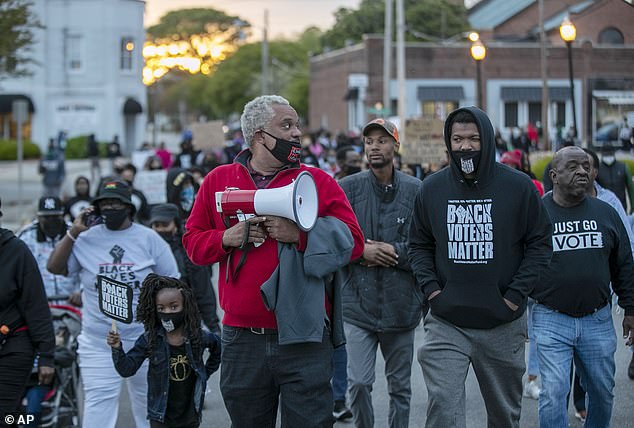 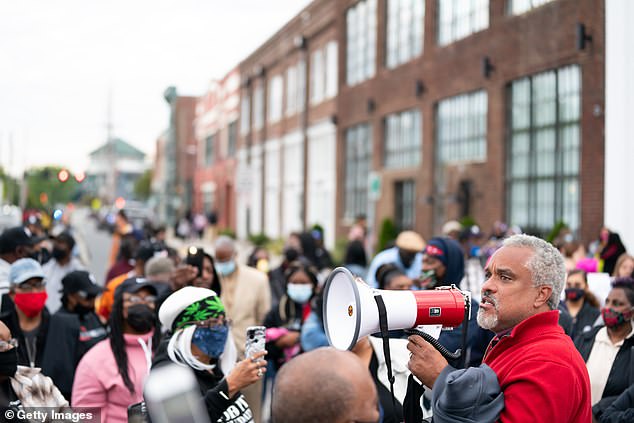 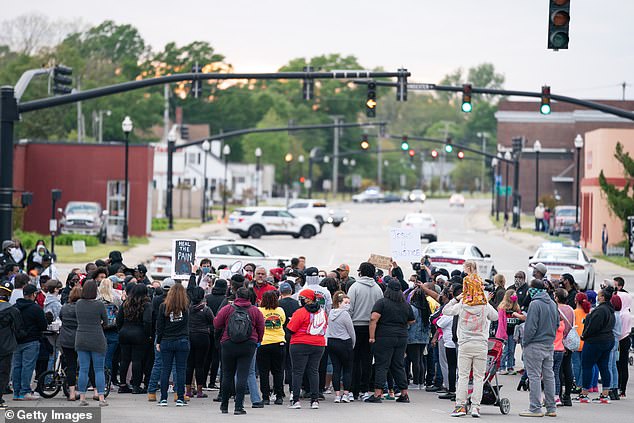 One deputy was initially placed on leave after the shooting, although their involvement in Brown’s death remains unclear.

The sheriff told WAVY-TV that footage from multiple body cameras would be released ‘in the next couple days’ after protesters took to the streets for two nights in a row demanding that officers release the footage.

Protesters were gathering across North Carolina headed into the weekend as police in Raleigh declared one protest an ‘unlawful assembly’ as of 8pm after a group of protesters allegedly threw trash cans into the street, WRAL reported.

‘We appreciate protestors resuming peaceful demonstrations and ask that they continue to do so until the end of the protest,’ Raleigh police tweeted. 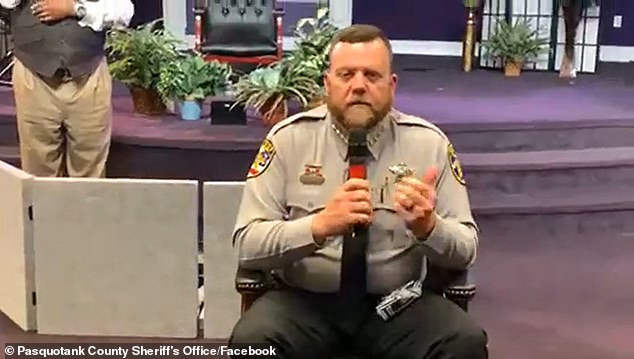 Pasquotank Sheriff Tommy Wooten, top, appears during a meeting at The Mount, a church in Elizabeth City, where he spoke to push messages of unity and transparency, as well as accountability, with local religious and political leaders 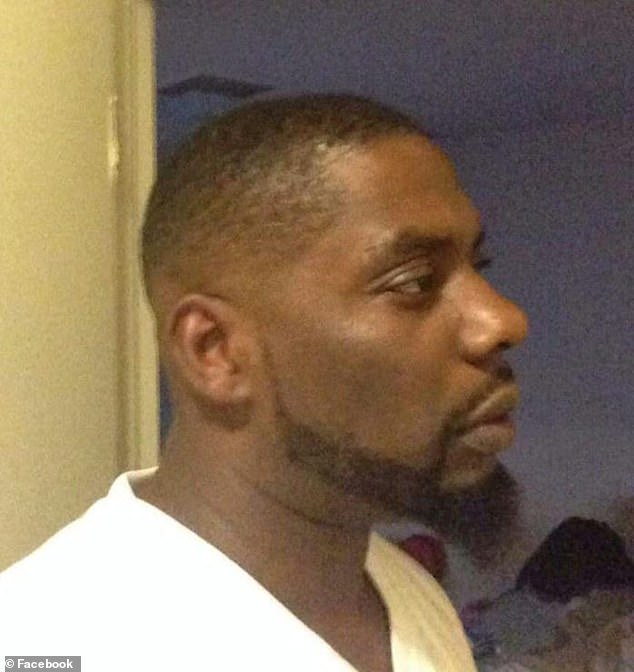 Andrew Brown, 42, was shot and killed by sheriffs in North Carolina on Wednesday morning

Brown, a father of ten, was described by his family as a ‘good guy’ 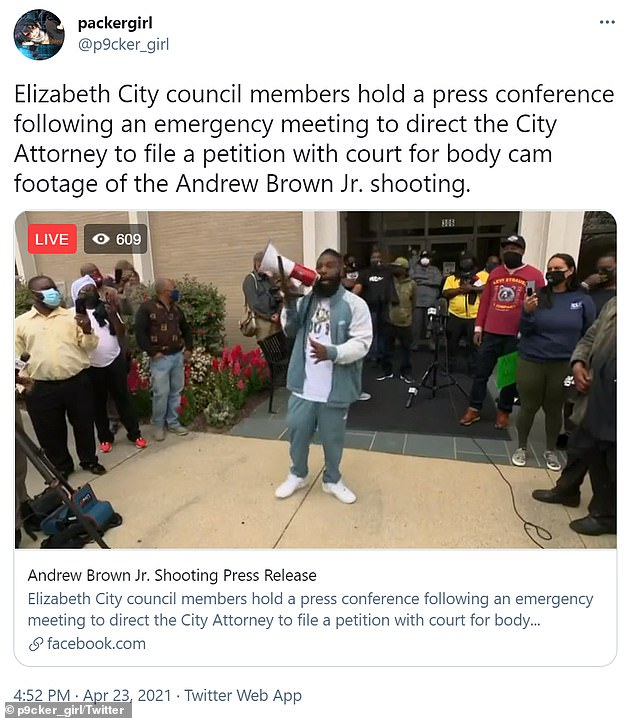 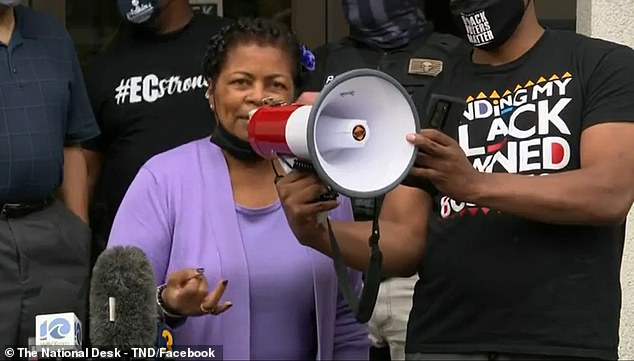 Elizabeth City council members hold a press conference following an emergency meeting to direct the City Attorney to file a petition with court for body cam footage of the Andrew Brown Jr. shooting 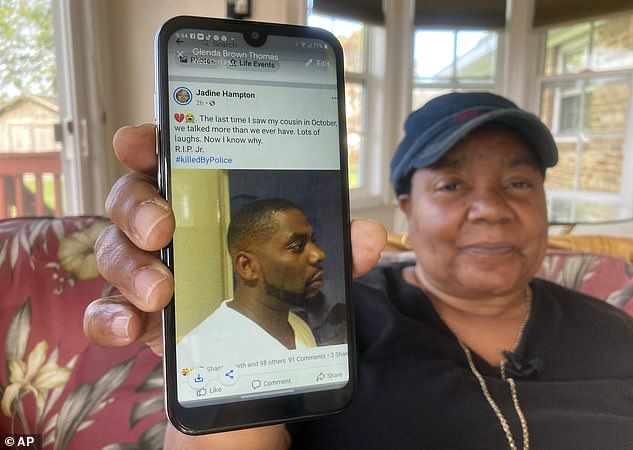 Glenda Brown Thomas displays a photo of her nephew, Andrew Brown Jr., on her cell phone at her home in Elizabeth City, N.C., on Thursday 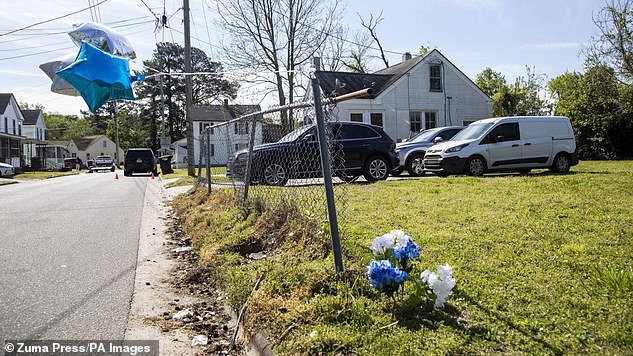 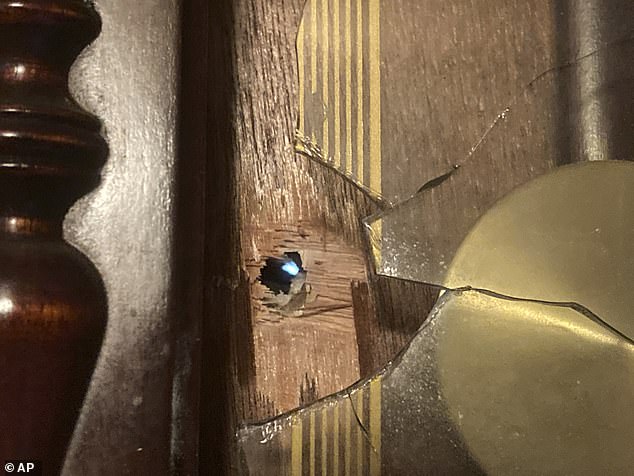 Daylight shines through a bullet hole in an antique clock on the living room wall of Michael Gordon’s home in Elizabeth City, N.C.

Brown, a father of 10 children, was shot and killed in his car at around 8.30am while police were executing search-and-arrest warrants for drug offenses, officials said.

Authorities would not provide details of the shooting but an eyewitness said that he was shot while trying to drive away, and that deputies fired at him multiple times.

The car skidded out of Brown’s yard and eventually hit a tree, said Demetria Williams, who lives on the same street.

Williams said after hearing one gunshot, she ran outside, where she saw other shots being fired at the car.

‘When they opened the door he was already dead,’ Williams told The Associated Press. ‘He was slumped over.’

She said officers tried to perform chest compressions on him. A car authorities removed from the scene appeared to have multiple bullet holes and a broken rear windshield.

However, the body camera footage cannot be released to the public without a court order under North Carolina law.

The Elizabeth City Council held an emergency meeting at 3.30pm on Friday and voted unanimously to petition the sheriff to release the body camera video, WAVY-TV reported.

City council members said that the Elizabeth city attorney will petition a superior court for an order of release if the sheriff denies the request. 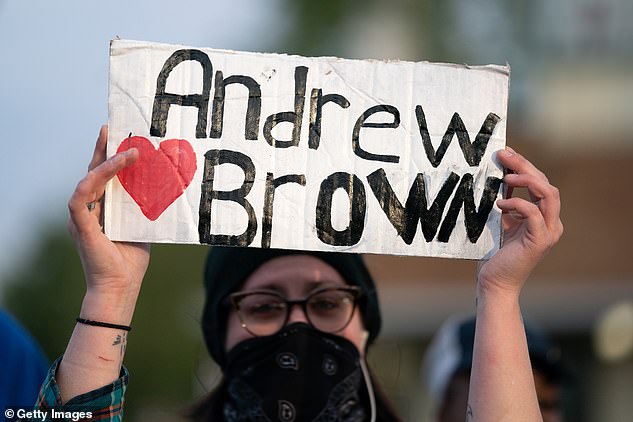 A demonstrator holds a sign for Andrew Brown Jr. during a protest march on Thursday 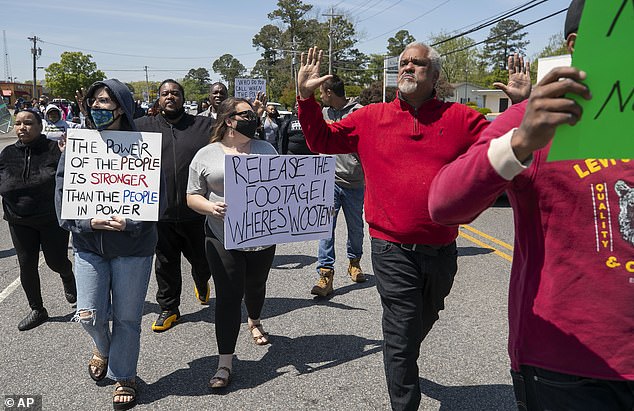 Kirk Rivers, president of the Pasquotank County chapter of the NAACP,  leads a group of demonstrators as they block Ehringhaus Street, a main retail avenue in Elizabeth City, N.C., on Friday 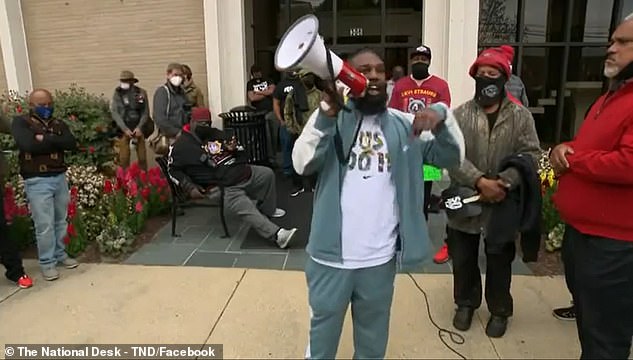 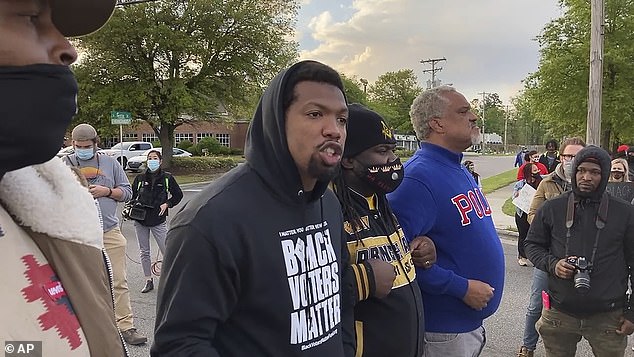 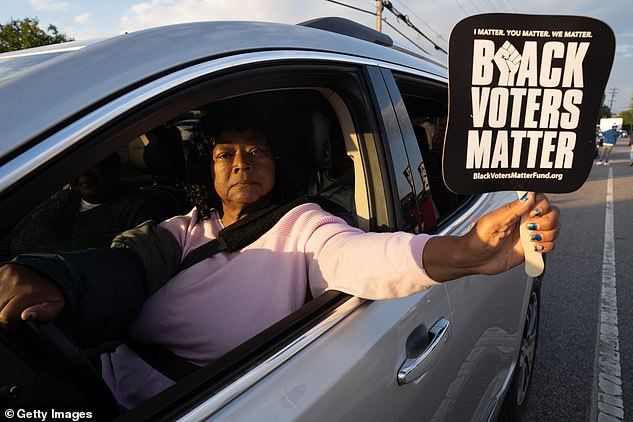 A woman holds a Black Voters Matter sign while driving in a protest march on April 22, 2021 in Elizabeth City, North Carolina 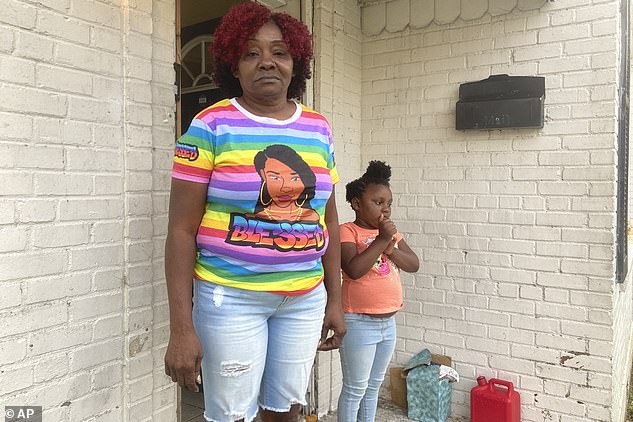 Andrew Brown Jr.’s aunt Martha McCullen and her granddaughter pose for a photo on the stoop of his rental home 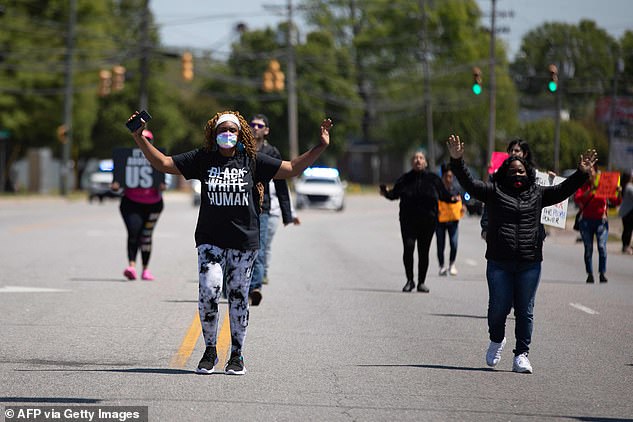 Demonstrators block an intersection to protest the police killing of Andrew Brown Jr in Elizabeth City, North Carolina on Friday

However, the city attorney said during the meeting that he does not believe the city has much of a legal standing to request the body camera footage.

Council member Darius Horton made a motion to make the request anyway to ‘send a message,’ according to the outlet.

City Attorney William Morgan said during the meeting that for the city to have legal standing to demand the footage it ‘would have to have suffered some harm or have some reasonable connection to the issue,’ The Outer Banks Voice reported.

Sheriff Wooten appeared during a meeting at The Mount, a church in Elizabeth City, where he spoke to push messages of unity and transparency, as well as accountability, with local religious and political leaders.

‘We come as a united front to let you know we hear you, we feel your pain. We know there is a lot of hurt in his community and we definitely want the transparency you want, we want the accountability that you want – and there will be accountability,’ Wooten said. 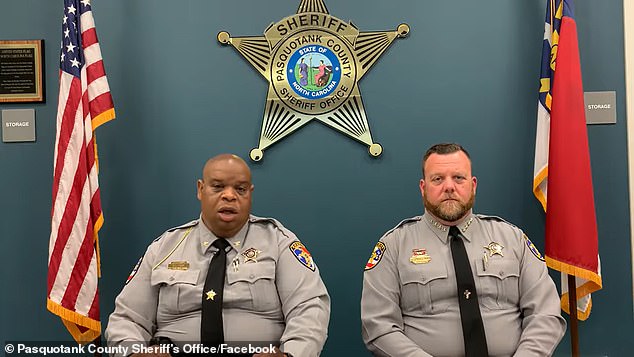 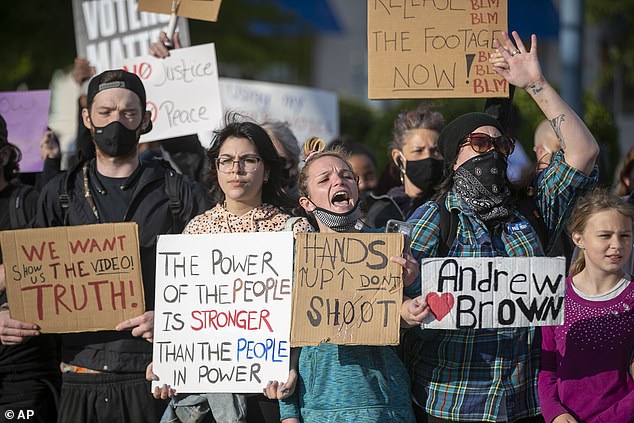 Demonstrators organize to march in Elizabeth City on Thursday 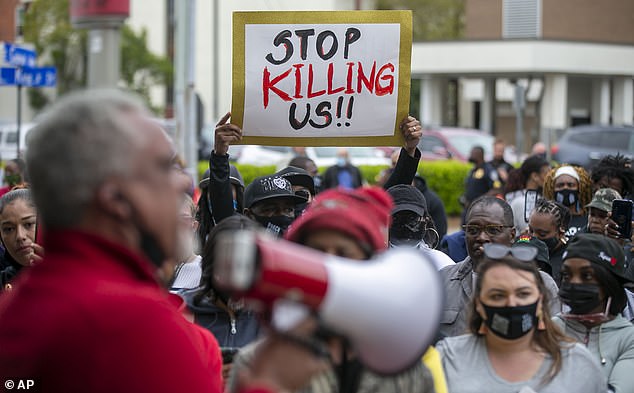 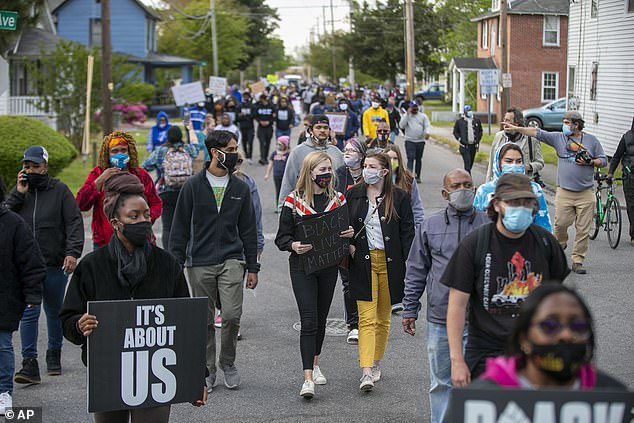 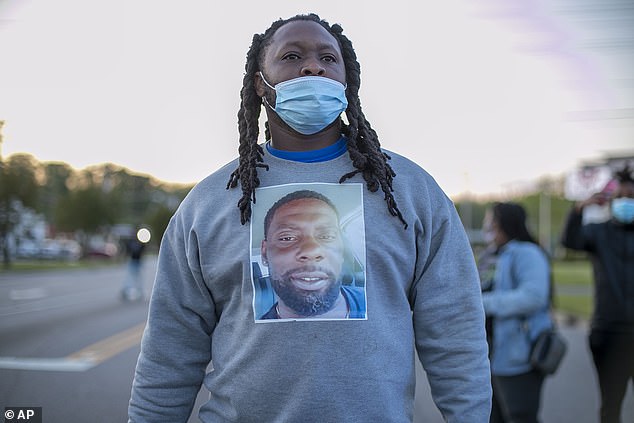 A demonstrator wears a shirt with an image of Andrew Brown Jr. on it during a march, Thursday

The sheriff offered his ‘sincerest condolences’ to the Brown family while local leaders called for peace and patience while investigations into the shooting death of Brown are underway.

‘I also will be calling in another agency to be doing our internal investigation, administratively, to keep my sheriff’s office out of it completely, and that is solely due to accountability,’ Wooten said.

‘I can assure the public that if any of my deputies … broke any laws or violated any policies that come out in this investigation, they will be held accountable because it’s what citizens expect of me, it’s my job as a leader, and it’s the right thing to do.’

Officials have described Brown as someone who was well known to police – but his family described the father-of-ten as a ‘good guy’, despite his ‘flaws’ – and are demanding the body camera footage.

‘The police didn’t have to shoot my baby,’ Martha McCullen, an aunt of Brown, said on Thursday on the stoop of Brown’s rental home.

She said she raised him after his parents died and that he recently had has children taken from him but was working to get them back.

‘Andrew Brown was a good person,’ she said. ‘He was about to get his kids back. He was a good father. Now his kids won’t never see him again.’

Brown’s grandmother, Lydia Brown, and his aunt Clarissa Brown Gibson told The Associated Press that they learned about his death through a TV news report. Both said they want the shooting thoroughly investigated.

‘I am very upset. Andrew was a good person,’ Lydia Brown said. The deputy ‘didn’t have to shoot him like that.’

Clarissa Brown Gibson said: ‘We want to know if he was served with a warrant, why the shooting over a warrant?’

Kirk Rivers, president of the Pasquotank County chapter of the NAACP, led a group of demonstrators as they blocked Ehringhaus Street, a main retail avenue in Elizabeth City, on Friday.

Rivers told the Associated Press earlier this week that ‘people in charge’ need to be held accountable.

‘When is it going to stop? We just got a verdict yesterday,’ Rivers said in a phone interview, referring to the guilty verdicts handed down Tuesday in the trial of former Minneapolis police officer Derek Chauvin in the death of George Floyd.

‘Is it open season now? At some point, it has to stop. We have to start holding the people in charge accountable.’

On Thursday night Andrew Womble, the district attorney for the First Prosecutorial District, which encompasses Elizabeth City, said they were prevented by law from releasing the footage.

‘It is reasonable for people to ask to see it, because such footage can help provide key context about what happens in incidents like this.

‘However, under North Carolina law police worn body camera footage is not a public record and cannot be released to the press or public without a court order.

‘We must follow the law and the law prohibits us from publicly releasing the body worn camera footage.’

Womble and Cox said they were allowed to show the footage privately to the family, however, and were making arrangements to do so.