Doctors misdiagnosed a 22-year-old’s leukaemia as tonsillitis for two months during the Covid-19 lockdown because they were reluctant to physically examine his throat, he has claimed.

Retail worker Ben Peters, from Swindon, said he was left unable to eat and barely able to breathe when his tonsils swelled to the size of golf balls during lockdown last year.

He first noticed his symptoms in October but was unable to get an appointment until November, during which he said doctors were still reluctant to carry out a physical examination of his throat.

Mr Peters was eventually diagnosed with acute lymphocytic leukaemia on December 29 after calling 111 on Boxing Day and being rushed to Great Western Hospital with severe breathing issues.

He is now urging Britons to be persistent while seeking medical assistance during the coronavirus lockdown if they think something could be wrong. 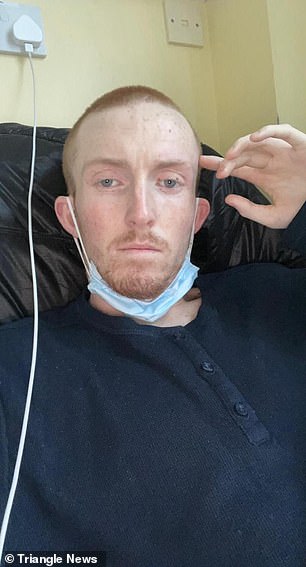 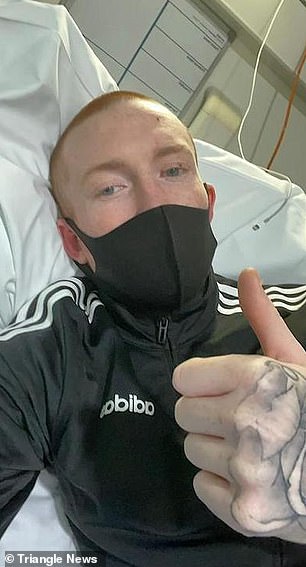 Retail worker Ben Peters, from Swindon, said he was left unable to eat and barely able to breathe when his tonsils swelled to the size of golf balls during lockdown last year

It comes as scores of MPs today warned the Prime Minister that Britain is facing a ‘cancer disaster’ that could cost tens of thousands of lives.

A group of 75 cross-party politicians say that as many as 100,000 people could miss out on cancer treatment due to the impact of the coronavirus pandemic, with many dying unnecessarily.

They have written to Boris Johnson demanding the cancer backlog is ‘tackled with the same political will as the vaccination rollout’.

‘The Government have rightly moved heaven and earth to save lives from Covid – it’s time the same was done for cancer patients,’ the MPs say.

Millions of people have been hit by disruption to cancer screening, diagnosis and treatment since Britain went into lockdown last March.

Mr Peters claims he was misdiagnosed with tonsillitis three times after doctors examined photographs he had taken in lieu of a physical appointment. 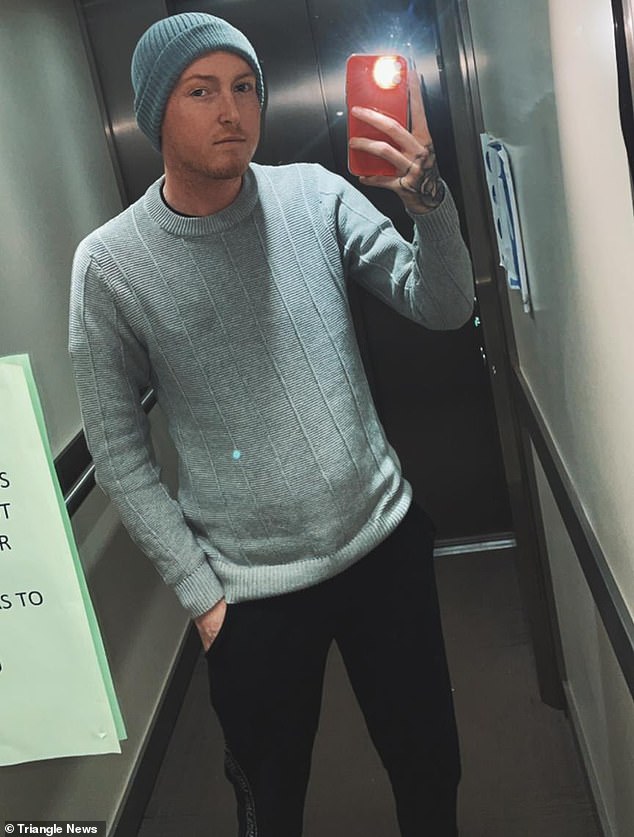 He first noticed his symptoms in October but was unable to get an appointment until November, during which he said doctors were still reluctant to carry out a physical examination of his throat 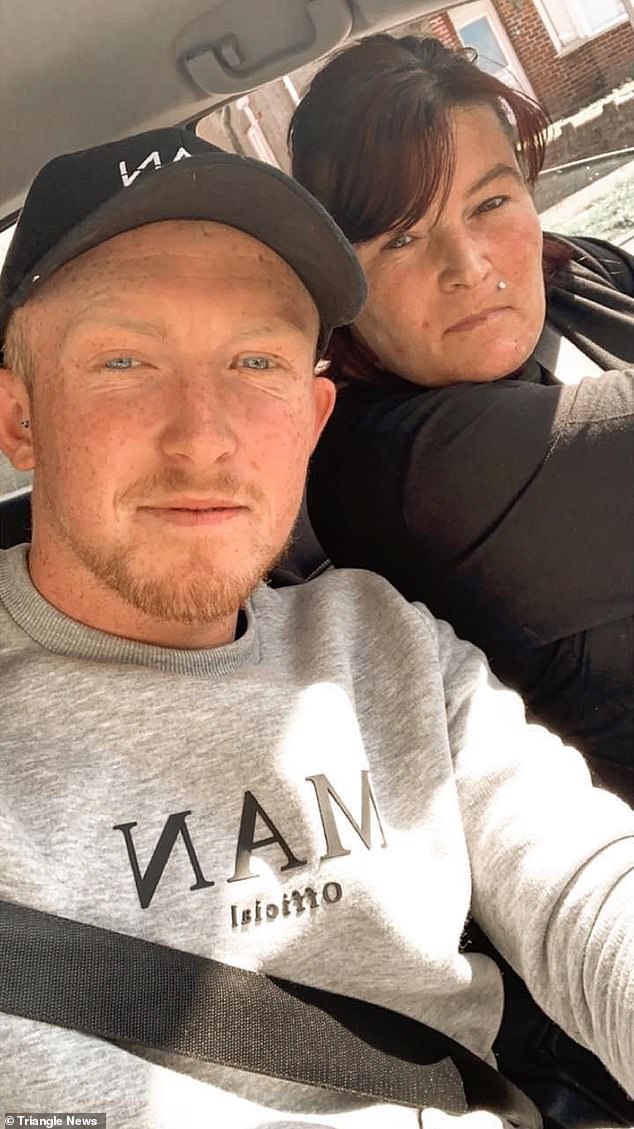 Mr Peters claims he was misdiagnosed with tonsillitis three times after doctors examined photographs he had taken in lieu of a physical appointment. Pictured: Mr Peters with his mother Hayley

He said: ‘I just knew that something wasn’t right, but I didn’t expect the diagnosis.’

The retail worker, who lives with his partner Mark, first noticed he had a sore throat and swollen tonsils in October, but had assumed he was just run down.

He was unable to get an appointment until November 15, after ‘constantly’ having to phone his GP at Priory Road Surgery in Swindon.

But after four courses of antibiotics, Mr Peters had still not recovered from what he believed to be tonsillitis.

‘I knew it wasn’t working, at this point my tonsils were filling the back of my throat,’ he said. ‘I was struggling to eat and was working up to 40 hours a week in constant pain.

By the time Latifah King was finally diagnosed with cancer, she only had days to live.

The 27-year-old died last Wednesday after spending months in agony.

Miss King was not able to see a doctor in person or offered any tests to check for cancer.

Last night her twin sister said Latifah was ‘brushed aside because the only killer they see right now is Covid’.

However, the pandemic meant she could only get a GP appointment via Zoom, and was misdiagnosed with sciatica.

She took herself to A&E in December when the pain became unbearable and she had visible lumps from the tumours, but was dismissed and prescribed codeine.

Miss King was finally admitted to hospital in January, when biopsies revealed she had cancer.

It took until the start of February for her to be diagnosed with epithelioid sarcoma, an aggressive form of soft tissue cancer.

She died at home one week later. Her twin Shanika told the Mail: ‘If it wasn’t a pandemic I believe more would have been done.

‘Covid means other illnesses are getting pushed aside.’

‘I had to keep phoning in sick, ultimately risking my job.’

Mr Peters said he could barely speak to customers while working and believes wearing a mask for eight hours a day had exacerbated his breathing issues.

Then, on Boxing Day. he called 111 demanding to be seen by a doctor.

‘I couldn’t breathe or get out of bed. I hadn’t even been able to eat my Christmas dinner, I was miserable,’ he said.

Mr Peters was then rushed to Great Western Hospital, where medics again told him it was likely he was suffering from a bad case of tonsillitis.

However, they decided to check for something more serious with bone marrow and blood tests due to the pain he was in.

Three days later, it was confirmed Mr Peters had cancer.

He said: ‘When they told me and my partner, my whole world just shattered. I can remember being told and feeling like I was being pushed back against my chair and I couldn’t get up.

‘It was the worst feeling.’

Mr Peters has been unable to see his mother Hayley throughout the ordeal, only keeping in touch through social media and FaceTime.

He said: ‘We FaceTime all the time, ultimately I’d rather wait and keep us both safe. I want to see her as soon as I safely can.’

After his diagnosis, Mr Peters was transferred to a hospital in Oxford where he spent 40 days as an inpatient.

He said all the medics he has met throughout his cancer battle have been ‘amazing,’ although he was ‘frustrated’ by the initial delay.

The retail worker is now in remission and has returned home.

He said: ‘Before the cancer I was working too much and eating unhealthily.

‘I had been living in a trance. To many this is the worst news possible – to find out at the age of 22 that you have cancer – but for me this is going to be the making of me.

‘When you face difficult times, know that challenges are not sent to destroy you. They’re sent to promote, increase and strengthen you.’

He is now fundraising to help support CLIC Sargent, the charity who supported him throughout his battle with cancer.

A spokesperson for Priory Road surgery said it couldn’t comment on individual cases. MailOnline has contacted the NHS for comment.

It comes as some grieving relatives of those lost to cancer have suggested that patients have become ‘collateral damage’, with the NHS focused on Covid. 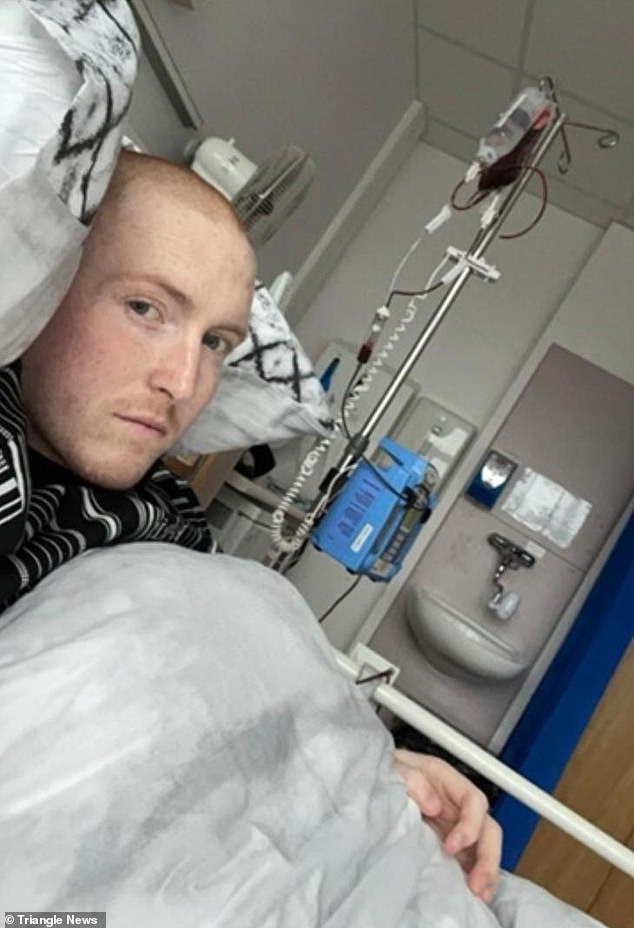 The retail worker, who lives with his partner Mark, first noticed he had a sore throat and swollen tonsils in October, but had assumed he was just run down. Pictured: Mr Peters in hospital

The All Party Parliamentary Group for Radiotherapy, backed by leading cancer charities, says urgent investment is now needed to boost NHS capacity so staff can treat and diagnose more patients.

Chairman Tim Farron said: ‘We are deeply concerned the Government has underestimated the scale and severity of the Covid cancer backlog.

‘Without extra capacity, the backlog will not get cleared for many years and thousands of loved ones will die unnecessarily.’

The MPs say 50,000 patients are thought to be living with undiagnosed cancer due to disruption caused by Covid-19.

‘This figure could rise as high as 100,000 by the time we emerge from the pandemic,’ their letter says. ‘The question is not whether we should save Covid patients or cancer patients… we can and should be able to save both.’

Young mother Kelly Smith died after her chemotherapy was paused for three months during the first lockdown.

The 31-year-old – who leaves six-year-old son Finn – was suffering from stage four bowel cancer but had been responding well to treatment.

Before she died on June 13, the beautician said she was angry that her treatment had been halted, adding: ‘I don’t want to die, I feel like I’ve so much more to do.’

Miss Smith, from Macclesfield, Cheshire, had been fighting bowel cancer for three-and-a-half years.

Her family believe the decision to cancel her chemotherapy during the pandemic ‘drastically’ cut short her life as it meant ‘there was nothing to keep the cancer in check’.

After her death, Miss Smith’s stepfather Craig Russell co-founded the Catch Up With Cancer campaign group.

He said: ‘Cancer patients have a right to life just as much as anybody who has Covid does, they shouldn’t be regarded as collateral damage of the pandemic.

The Government need to act now or we’ll go from the Covid crisis straight to a new cancer crisis.’

Early diagnosis and prompt treatment is crucial to survival chances. Every four-week delay in cancer treatment increases the risk of death by ten per cent.

But last year saw the lowest number of people starting cancer treatment in England for ten years, with cancer surgery alone down by 21,700 in the first wave.

A staggering 330,000 fewer people saw a specialist for suspected cancer between March and December, as the Government’s ‘stay at home’ message put people off getting symptoms checked.

In today’s letter to the PM and Chancellor, the coalition of MPs warn: ‘Cancer lives are already being lost and we may lose as many as 35,000 patients and 60,000 life years to cancer as a result of the cancer backlog.’

They are calling for a new national cancer recovery plan to bring down waiting lists and ‘avoid a post-Covid cancer catastrophe’.

Extra capacity is essential because cancer services must run at 120 per cent of ‘normal’ levels – at least – to make up for the shortfall.

Professor Pat Price, a leading oncologist and founder of the Catch Up With Cancer campaign, warned delays meant patients were coming forward with more advanced cancer than usual.

She said: ‘We are going to be looking back in years to come at a Covid-caused cancer nightmare that led to as many cancer patients being lost unnecessarily as we lose to coronavirus itself.

‘It doesn’t have to be this way. We can save both Covid and cancer patients. But that needs a change in approach, proper accountability and hard cash at the Budget for cancer services.

‘We estimate by the end of the pandemic there could be a backlog of 100,000 untreated cancer patients.

‘These are people who since last April should have been diagnosed with new or relapsed cancer and had all their treatment but have not. Some still won’t have been diagnosed. Thousands of people are going to die who didn’t need to have done.’

Professor Price added: ‘There are straightforward steps such as replacing old radiotherapy machines or scanners that can help clear the backlog, to increase treatment and diagnosis rates.

‘Newer radiotherapy machines can do one round of treatment in 15 minutes, whereas older models take 45 minutes. That means you could treat three times as many people.’

A record 4.52million people are currently waiting to start NHS treatment, with 242,000 waiting more than a year.