Fans of Donald Trump gathered in London today as the US President began his state visit amid a wave of protests expected over the next three days.

Mr Trump will visit Buckingham Palace today after arriving at Stansted Airport for a three-day trip that will see him meeting the Queen and other senior royals, as well as Theresa May in her final days as Prime Minister.

But hundreds of thousands of protesters could join demonstrations that will see them fly an offensive 20ft blimp depicting the President as an angry baby and unveil a 16ft talking robot of Mr Trump sitting on a gold toilet. 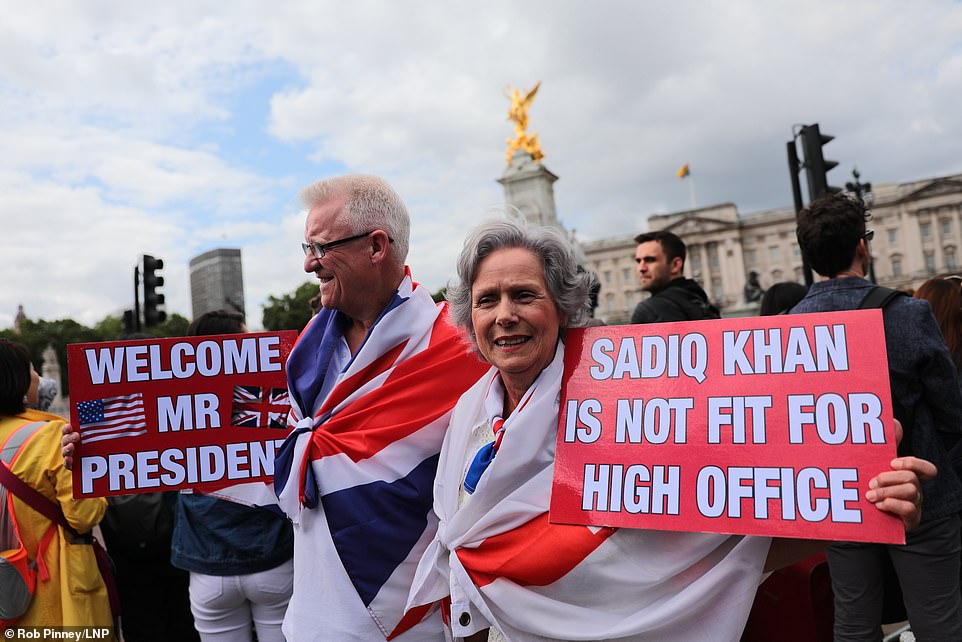 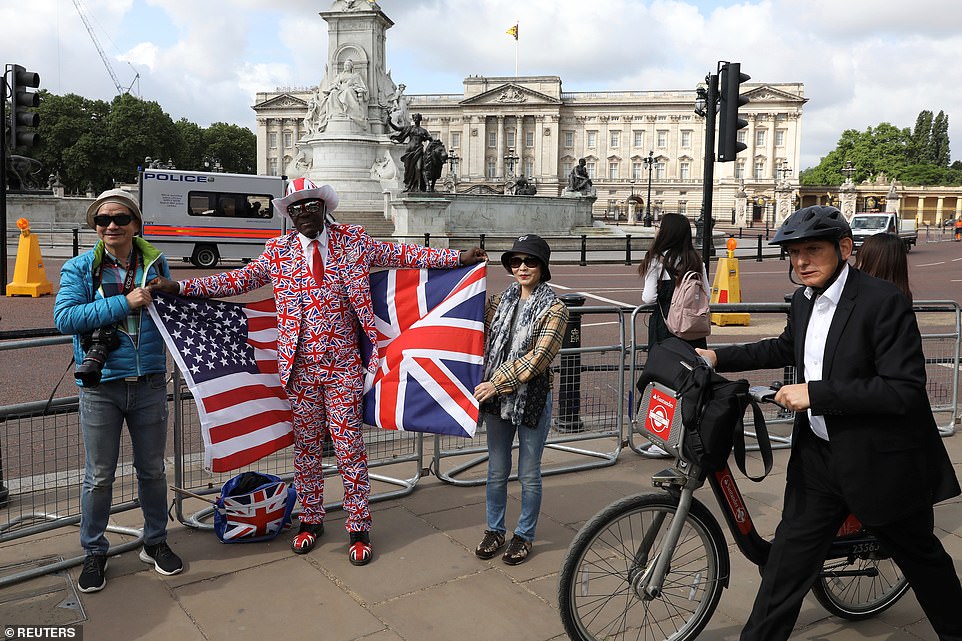 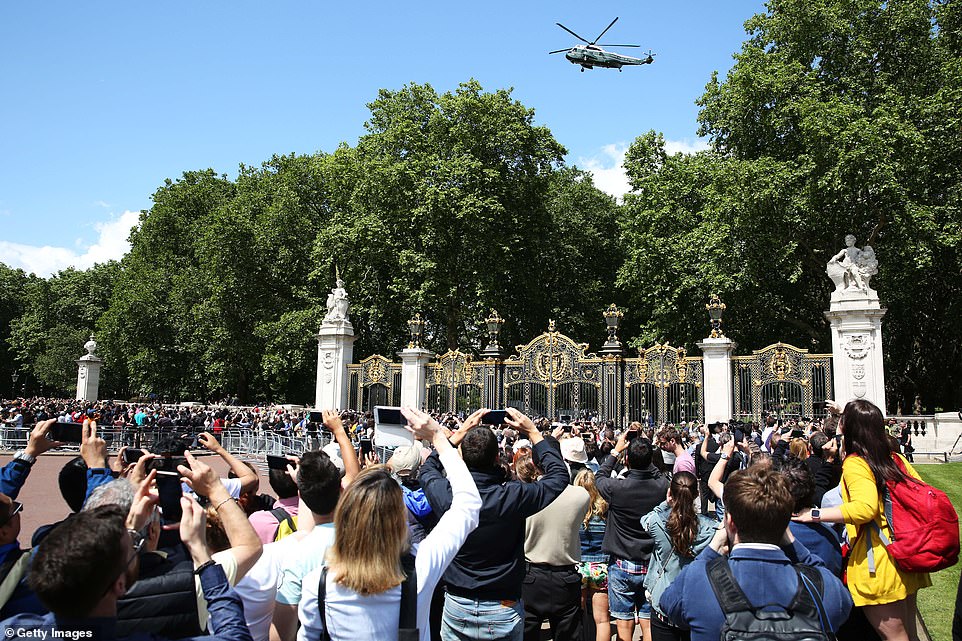 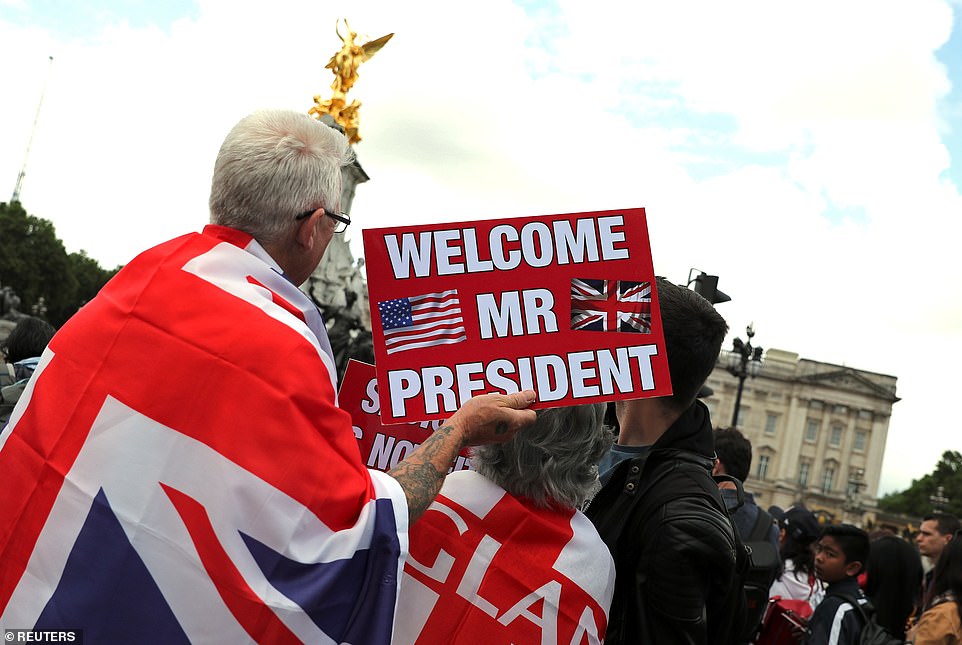 The couple, who identified themselves as the Holdcroft, wait in front of Buckingham Palace during the state visit today 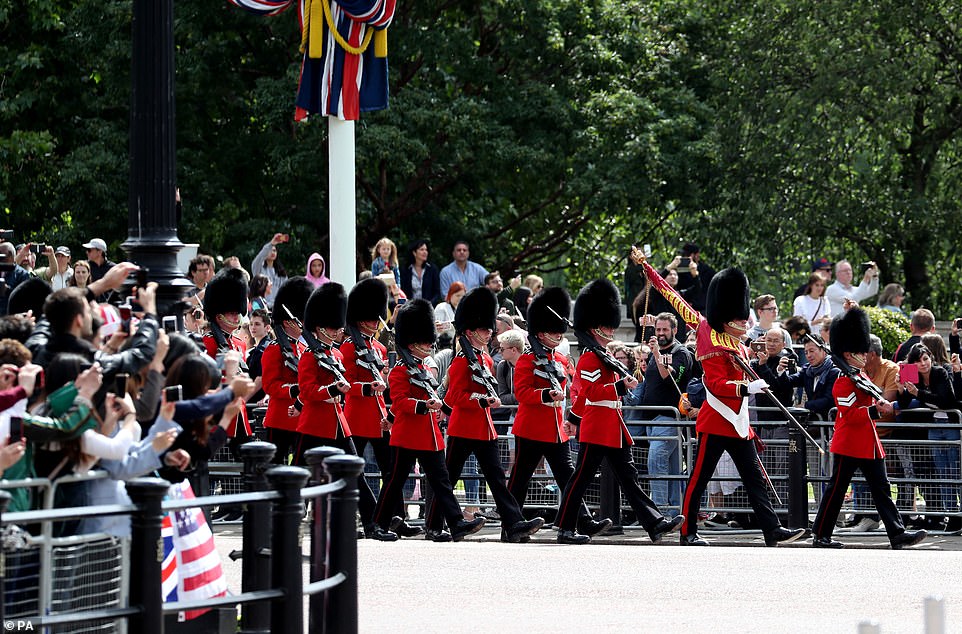 Neil Clark, 39, from Woolwich in South East London, joined a growing crowd outside Buckingham Palace awaiting the arrival of the president this morning and described Mr Trump as ‘amazing’.

He said he was a ‘massive fan’, adding: ‘Just his character, the energy he has, the passion he has. He’s an amazing guy.’ Mr Clark described the prospect of protests against Mr Trump as ‘quite disrespectful’ and ‘quite shameful’.

Members of The King’s Troop Royal Horse Artillery made their way past the front of Buckingham Palace and into Green Park ahead of firing Royal Salutes later. A military band played music on the palace forecourt.

Police officers could be seen standing at three different points on the roof at the front of the palace. The crowd outside grew and were entertained by the band, with tunes including the themes to both Rocky and Fame.

The US President and the First Lady Melania Trump were greeted by Foreign Secretary Jeremy Hunt and US ambassador to the UK Woody Johnson at Stansted Airport this morning as they began their three-day trip. 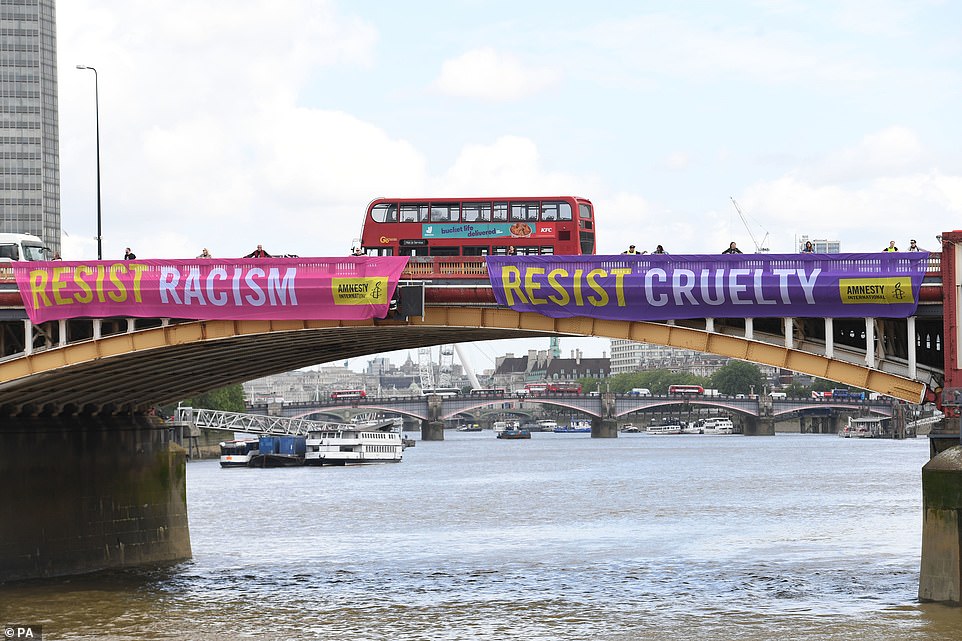 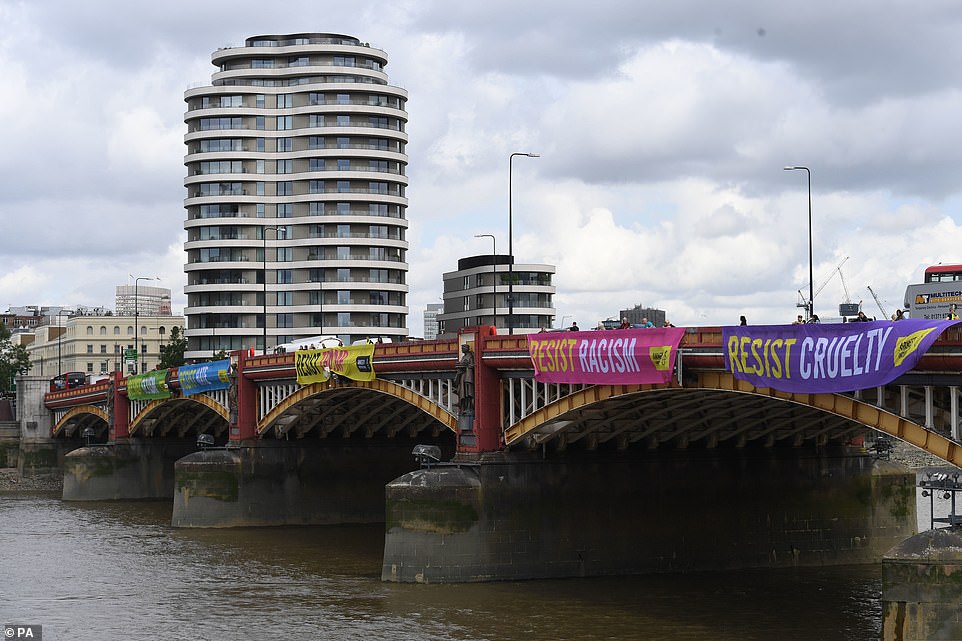 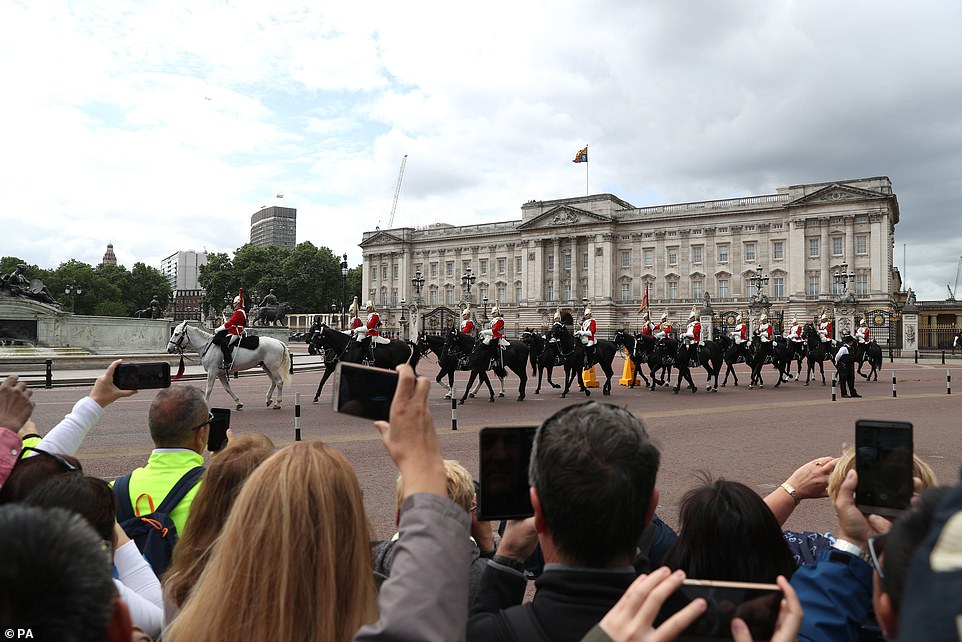 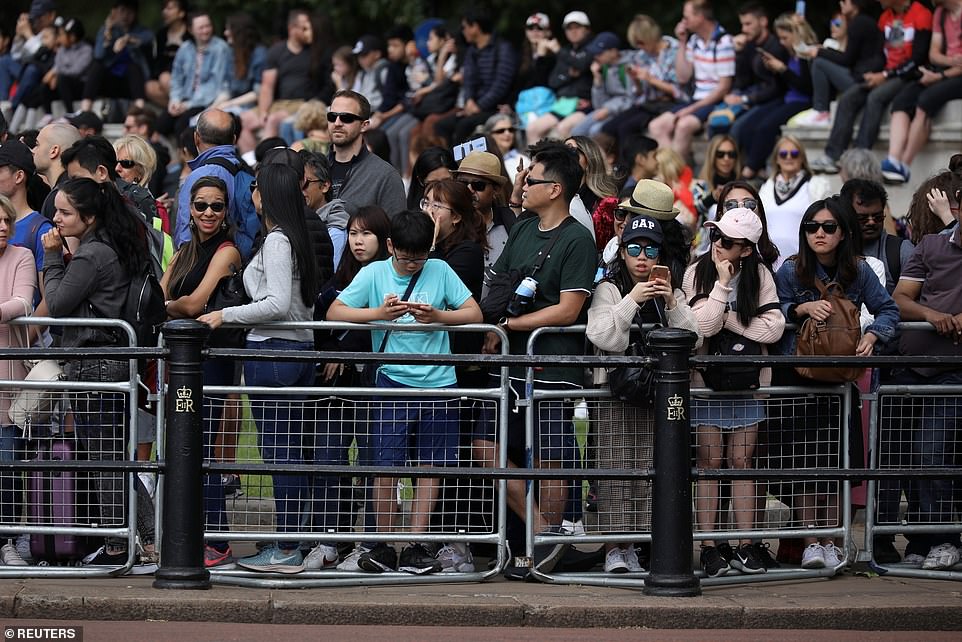 The Trumps then headed to Winfield House, the ambassador’s residence in the capital. Mr Trump arrived having already created political turbulence with comments on the Tory leadership race, Brexit and the Duchess of Sussex.

Mr Trump arrived on Air Force One at Stansted Airport, waving as he walked down the steps from the front of the jet, accompanied by the First Lady who wore a blue pencil skirt and blazer, dark sunglasses and heels.

An array of US military helicopters arrived around an hour ahead of the President’s white and blue plane, which bears the US flag on the tail fin and the words United States of America.

There was a visible armed police presence around the airport and police vehicles parked alongside the runway.

Other passengers on Air Force One, including members of the media, disembarked from the rear of the plane while 20 troops from the RAF Regiment formed a guard of honour for Mr Trump.

Mr Trump and the First Lady made the short walk to helicopter Marine One which took them to central London. A military officer saluted Marine One as it taxied off, followed by a second US helicopter and a UK police helicopter.

An art student has found an imaginative way of getting his message to US President Donald Trump today.

Ollie Nancarrow, of Bishop’s Stortford, Hertfordshire, mowed a rather rude welcome to Mr Trump into a field on the flight path into London Stansted Airport, where the US leader arrive at 9am today.

One message featured an outline of a polar bear alongside the words: ‘Climate change is real’. The 18-year-old said that ‘living under the flightpath has to have some advantages’.

He said: ‘I wanted to show Trump that I oppose his views and policies on climate change and, as an artist, I use whatever canvas I have.’

Mr Nancarrow, who is part of the sustainability and environmental awareness group ‘Born Eco’, won’t get to take part in any other Trump protests until later as he is busy taking an A-level exam. 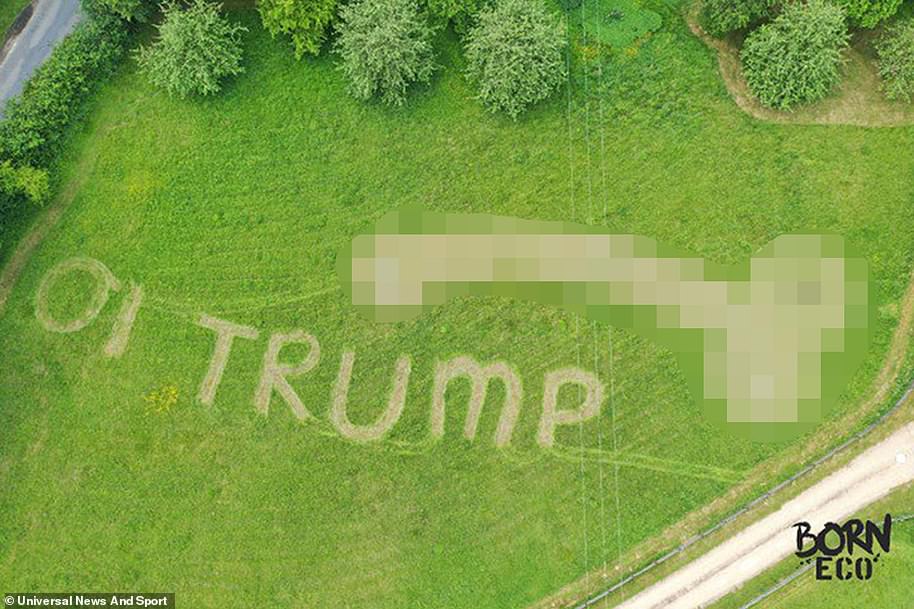 Ollie Nancarrow, of Bishop’s Stortford, mowed a rather rude welcome to Mr Trump into a field on the flight path into London Stansted