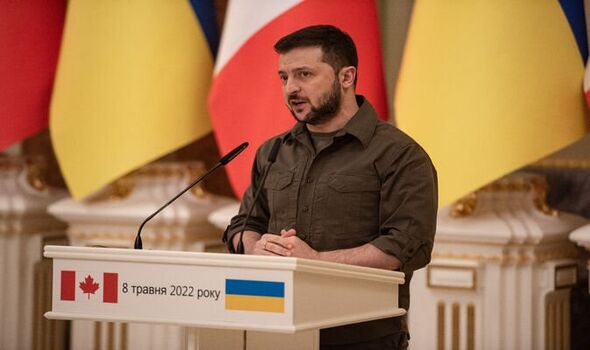 However, he said: “We are holding positions in the Severodonetsk direction. There are more of [the Russians], they are more powerful, but we have every chance to fight in this direction.” The regional governor for the area, Serhiy Haidai, confirmed that the battle for the city was still in “full swing”.

Writing on the messaging app Telegram, he said that in Lysychansk several civilians had been injured after Russian fire hit a market and school – though no numbers were given.

A morning update from the Ukrainian armed forces said Russia’s “main efforts” were focused on Severodonetsk – though the Ukrainians were inflicting damage on their enemy.

Heavy fighting was also ongoing in nearby Bakhmut, where another Ukrainian counter-attack had been launched.

In Zaporizhzhia, the frontlines have moved little in the last two months but the areas beyond are shelled almost daily. The update said 10 attacks across the eastern Donbas region were repelled over the previous day by defending forces.

Russian state media confirmed the death of one of its top generals in eastern Donbas.

And a Russian mercenary who gained notoriety for butchering prisoners of war and civilians in the Donbas has also died while fighting in Ukraine.

Vladimir Andonov, 44, a fighter for the shadowy Wagner Group, was shot by a sniper near Kharkiv on Sunday, Russian media said.

Andonov was known to Ukrainians as “the executioner” for massacres he helped carry out during Russia’s first invasion of the country in 2014.

The bodies of some of Ukraine’s fighters killed defending the city of Mariupol at the vast steel works have been handed over to Kyiv, the national guard said yesterday.

There has been little information about the fate of the estimated 2,000 Azovstal defenders.

Kyiv is seeking the handover of them all in a prisoner swap, but several Russian lawmakers want some soldiers put on trial.

It was not clear how many bodies had arrived in Kyiv. But they are thought to have been handed over as part of an exchange of 160 bodies with Russia announced last week.