Let the hangovers begin! Brits wake up with some VERY sore heads after partying into the night and town centres are strewn with bottles in the aftermath of England’s incredible Euros victory

Celebrations went long into the night for Three Lions fans after England ran riot in Rome with a stunning 4-0 win in their Euro 2020 quarter-final clash with Ukraine.

After sending beer flying across pubs and bars during last night’s game, football fans took the party to the streets as they soaked up England’s dominant display.

In Brighton fans in cars performed wheel spins to fill the streets with smoke and honked their horns as hundreds of England supporters partied in the city centre.

In London’s Trafalgar Square – where there is an official Euro 2020 fan park – fans dressed in England shirts and wrapped in England flags celebrated the resounding win.

Hundreds also gathered in nearby Leicester Square after the match. But as the beers flowed, the scenes soured, with police moving in and appearing to make arrests.

It comes as England captain Harry Kane scored a brace, adding to goals from Harry Maguire and Jordan Henderson, to secure a 4-0 victory against Ukraine at the Stadio Olympico in Rome last night.

It means Denmark are all that stands between Gareth Southgate’s side and a historic first European Championship final. The semi-final clash is due to take place on Wednesday night at Wembley. 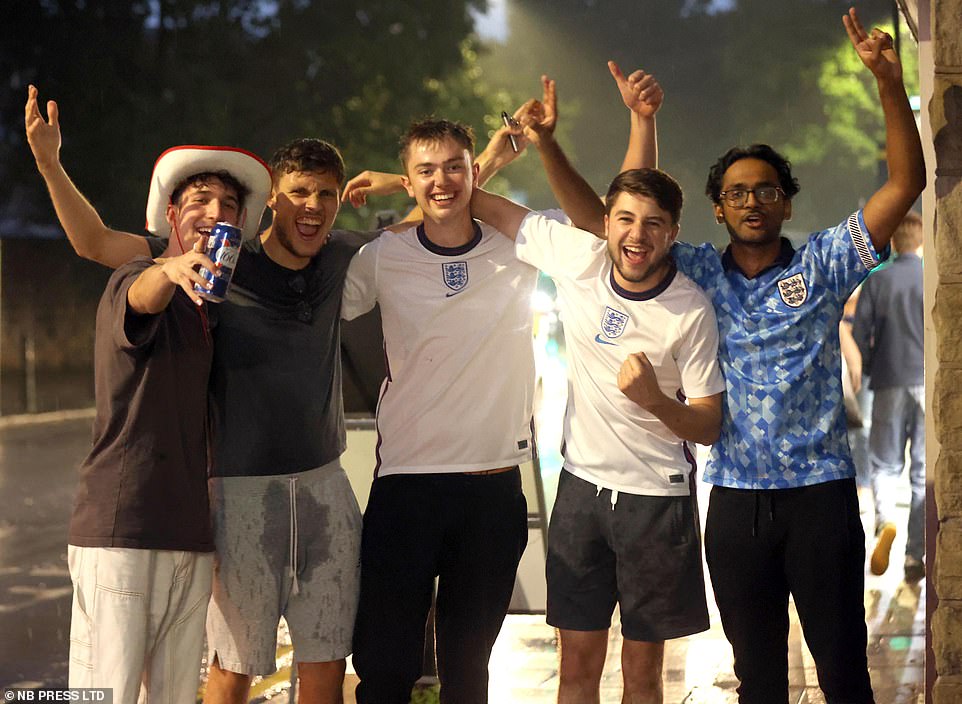 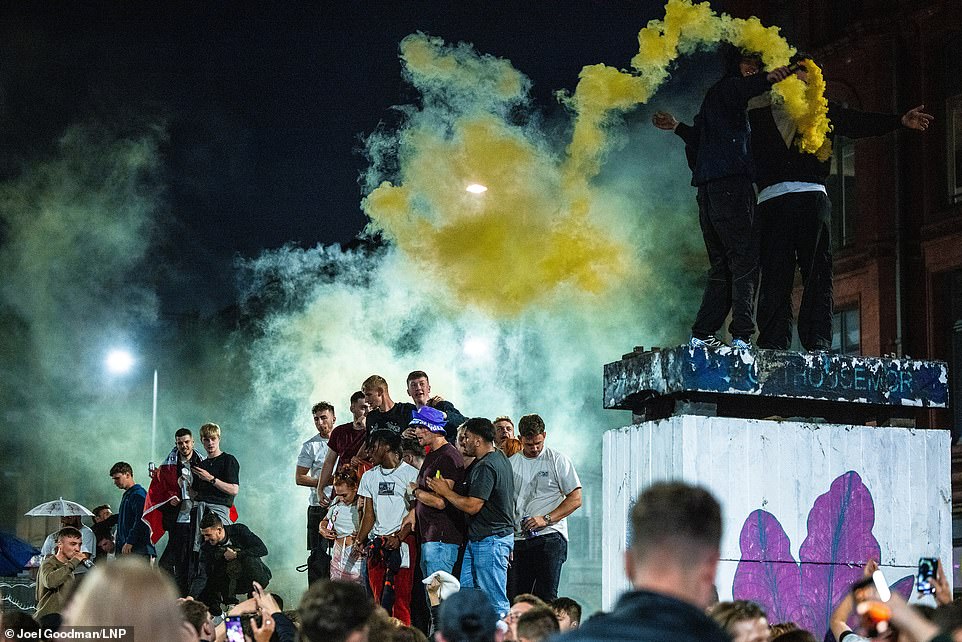 After sending beer flying across pubs and bars during last night’s games, football fans took the party to the streets as they soaked up England’s dominant display. Pictured: Fans let off flares at Stevenson Square in Manchester 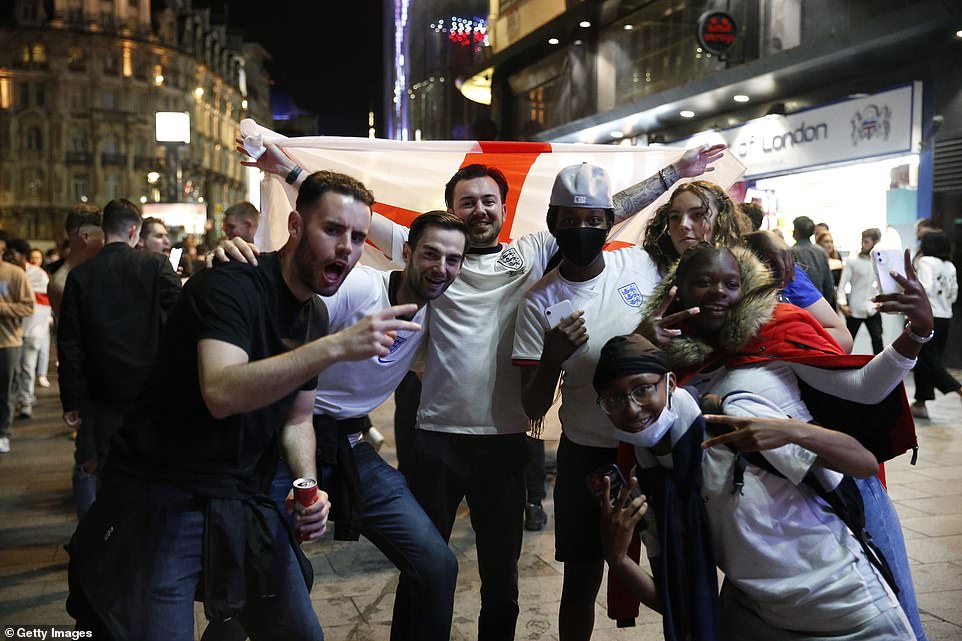 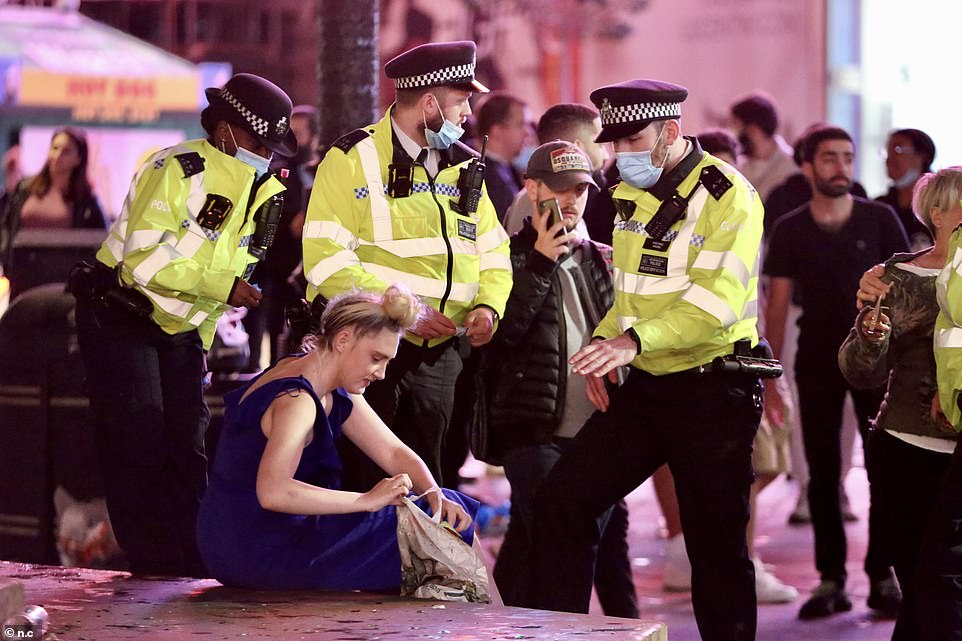 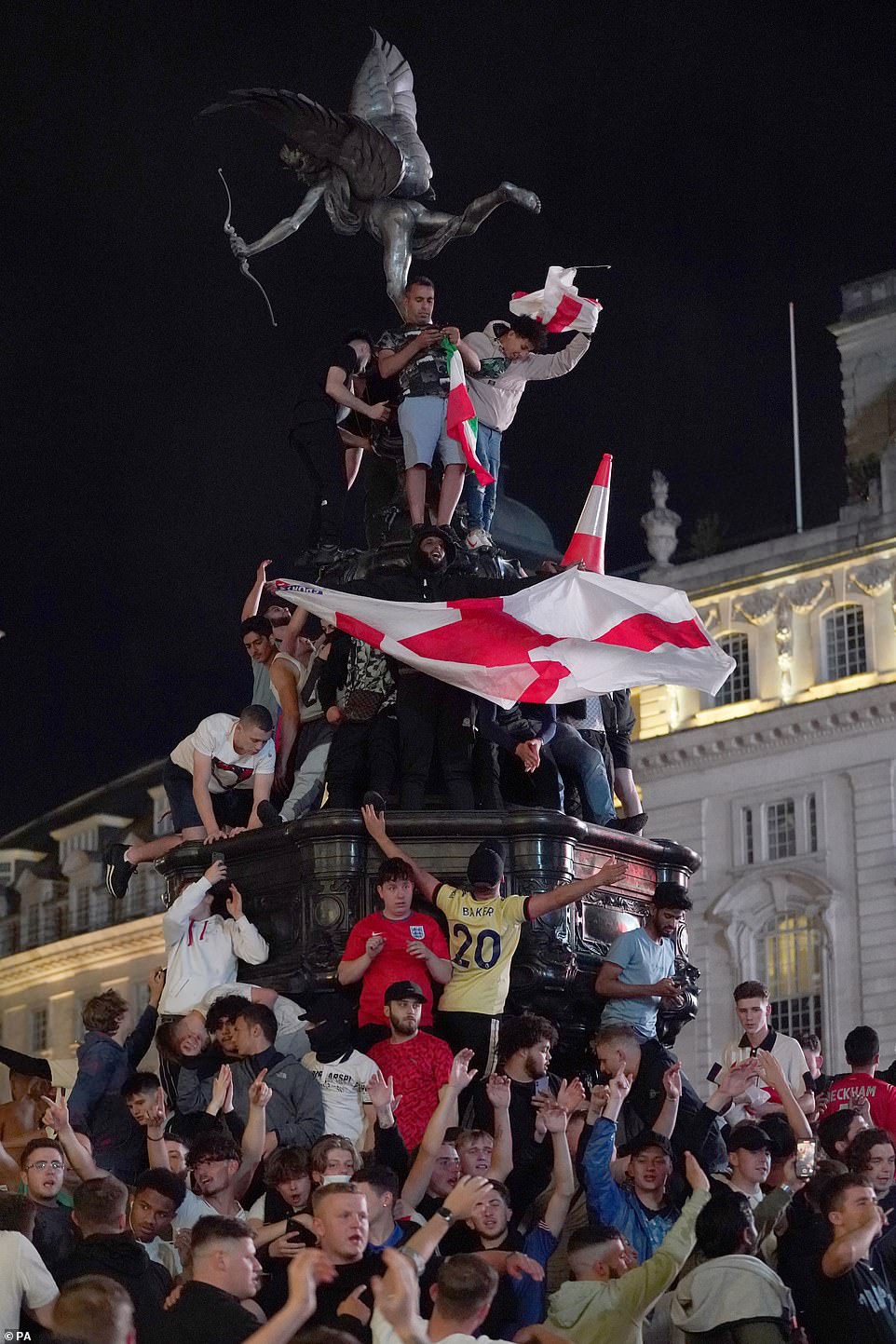 60,000 expectant fans will pile into Wembley on Wednesday, hoping to roar the Three Lions on to victory against Denmark in their first Euro semi final for 25 years 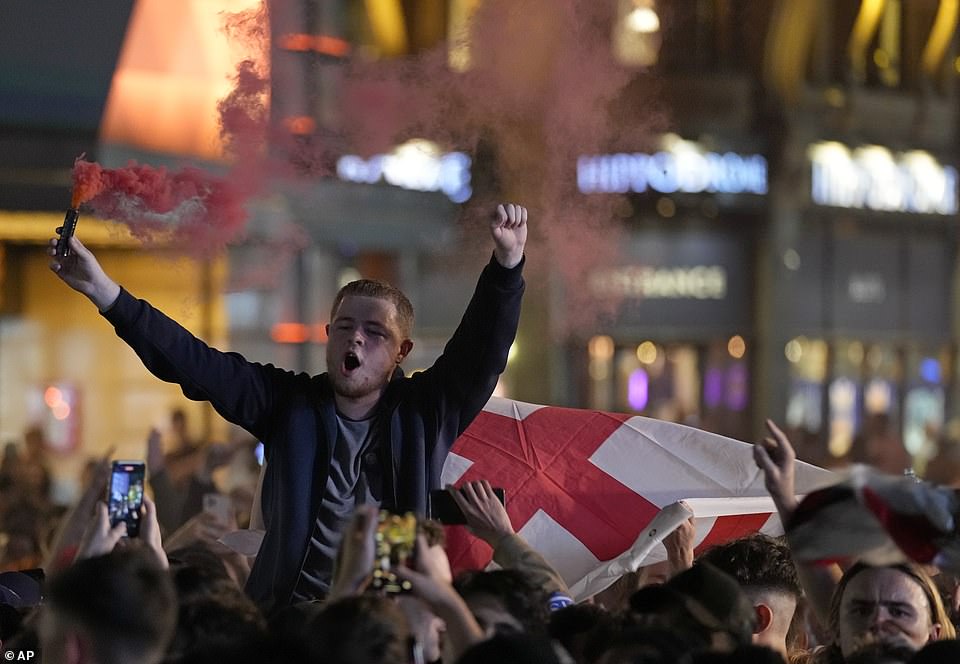 Thousands of England supporters took to the streets to celebrate England’s win against Ukraine. Pictured: An unmasked fan atop his friend’s shoulders in Leicester Square, London 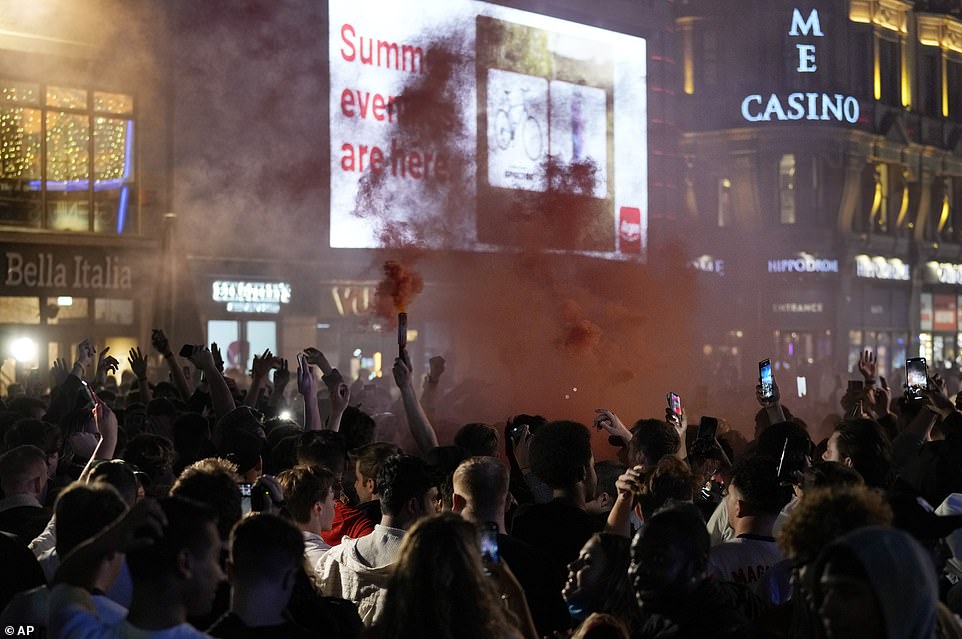 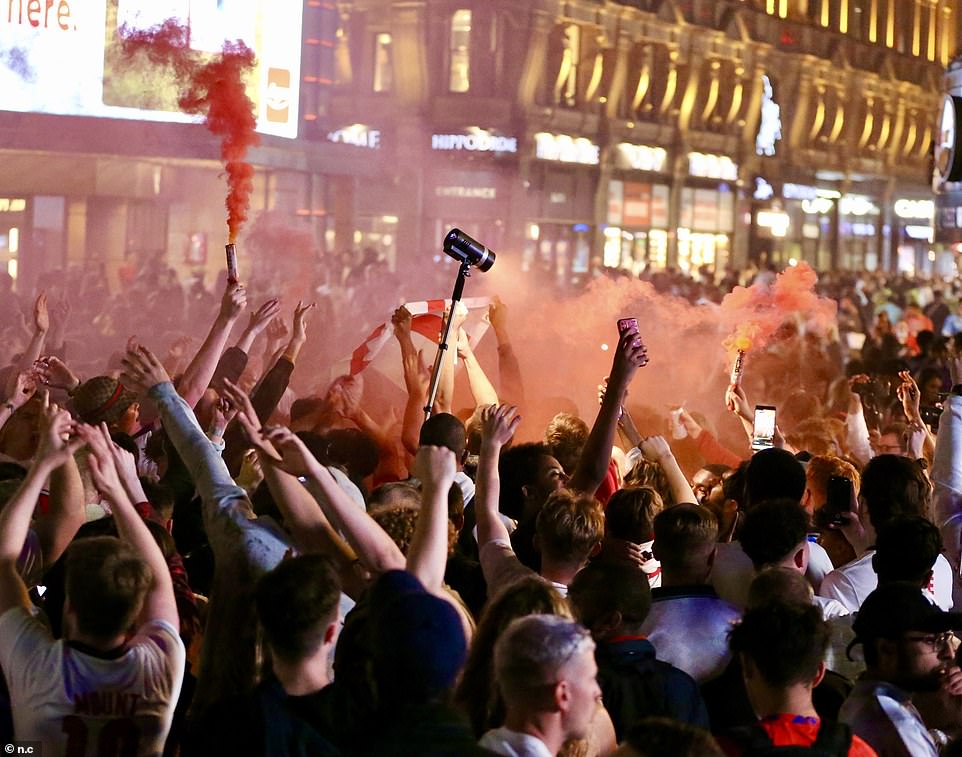 It came after talisman Kane gave England an early lead when he poked the ball home with just four minutes on the clock after a killer though-ball from Raheem Sterling, who gave another classy performance.

Maguire then scored with a thumping header from a Luke Shaw cross to make it 2-0 after the break. And England then ran riot in Rome, with Kane scoring his second and Henderson heading home a fourth from a Mason Mount corner.

The lucky few thousand England fans who had made it to Italy celebrated into the early hours in Rome.

‘It has been the most amazing night,’ said James Curran who had travelled from Prague with two friends for the match. ‘I don’t think anyone in the stadium expected this result. Everyone is in dreamland.’

Other stunned supporters struggled to get their words out as they tried to comprehend the team’s achievement.

Supporter Marc Ghossein said: ‘It’s an amazing feeling. We have been waiting for this for 25 years now.’ His friend Ellie Mhanna added: ‘England are going to win this year’s Euros for sure. They’ve been consistent and they deserve it.’

When the game ended the festivities continued in London, firstly inside the fan zone at Trafalgar Square before they were kicked out by security.

Fans later took to the streets of London, partying in Pall Mall, Leicester Square and Piccadilly Circus, excited for the prospect to do it all over again on Wednesday.

But it turned sour at Leicester Square, where police clashed with swathes of England fans. 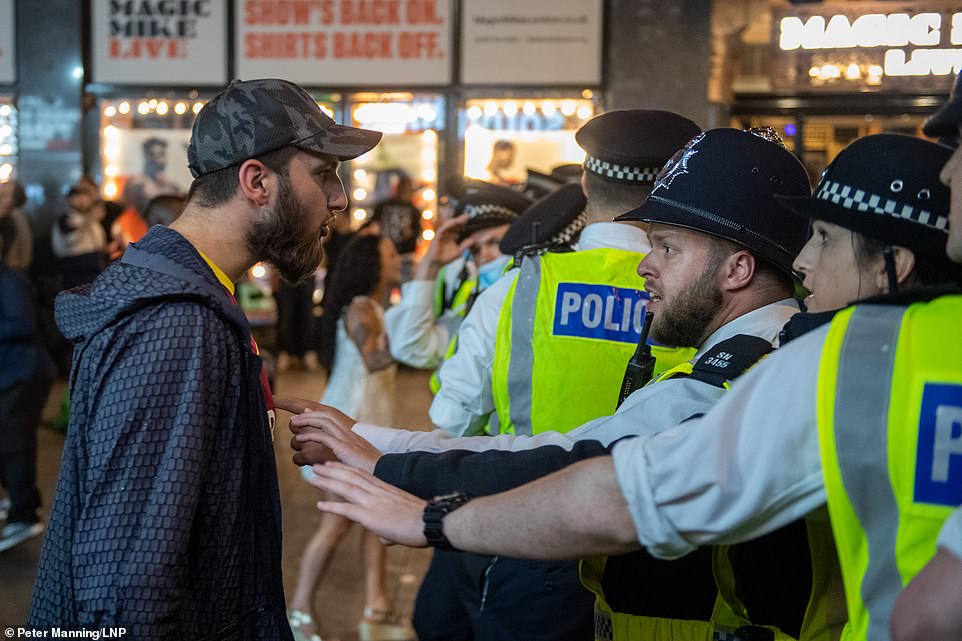 However scenes soured at Leicester Square last night, as police appeared to clash with supporters after the game between England and Ukraine in Rome 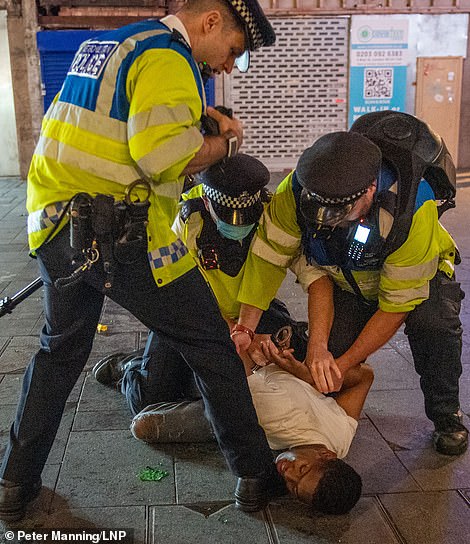 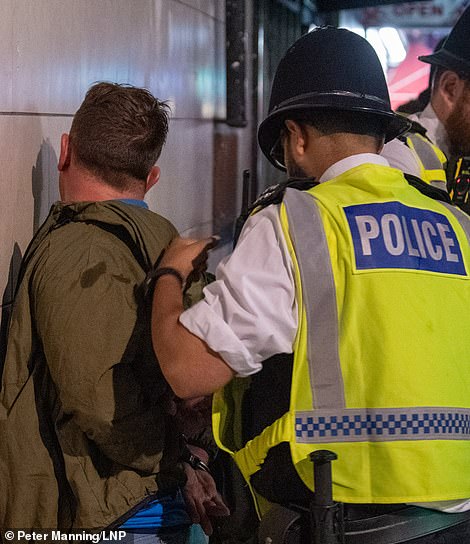 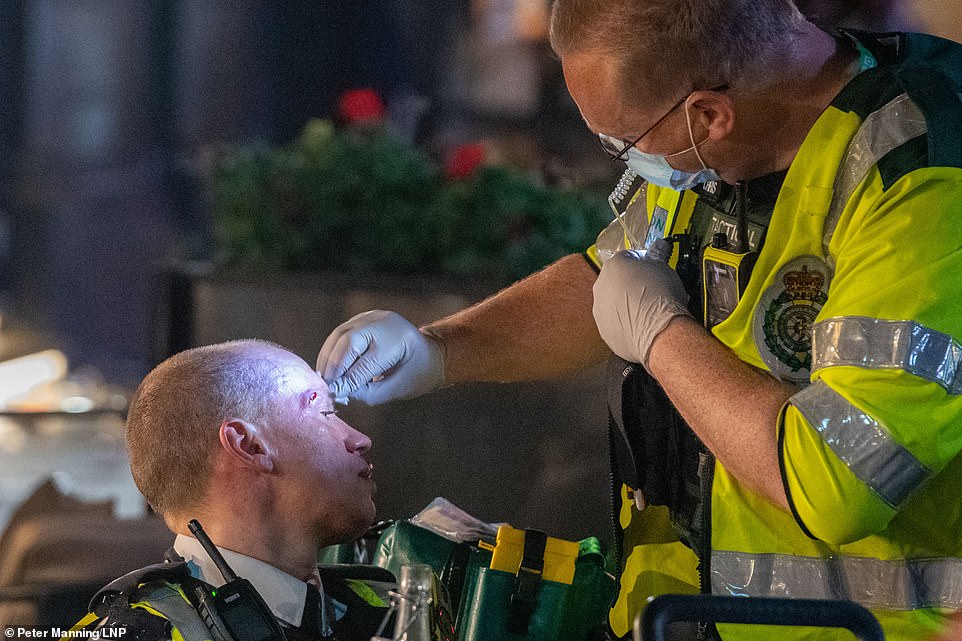 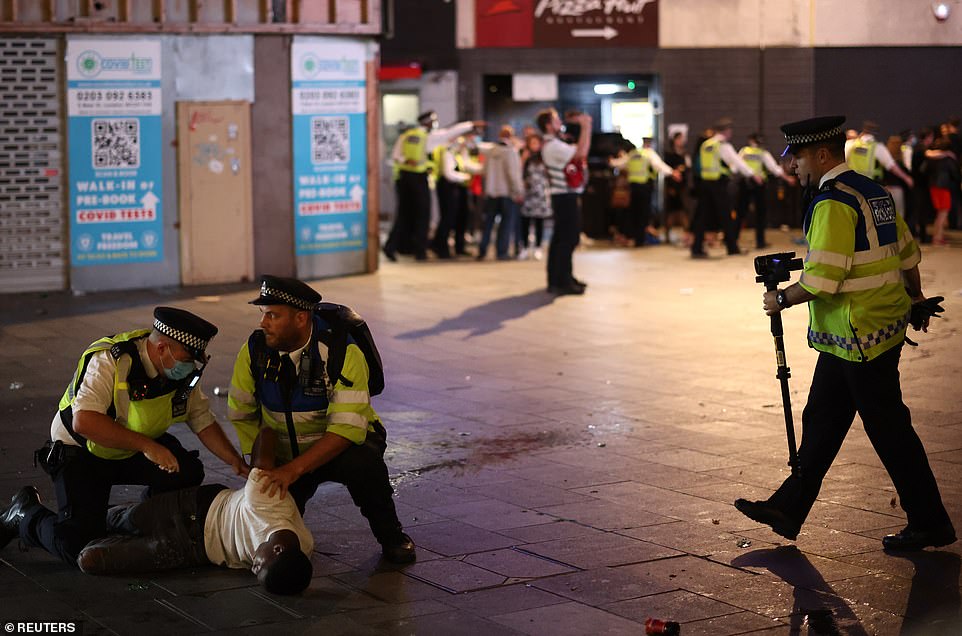 A handful of supporters have clashed with police this evening after England’s victory. Pictured: A man is detained by police officers in London 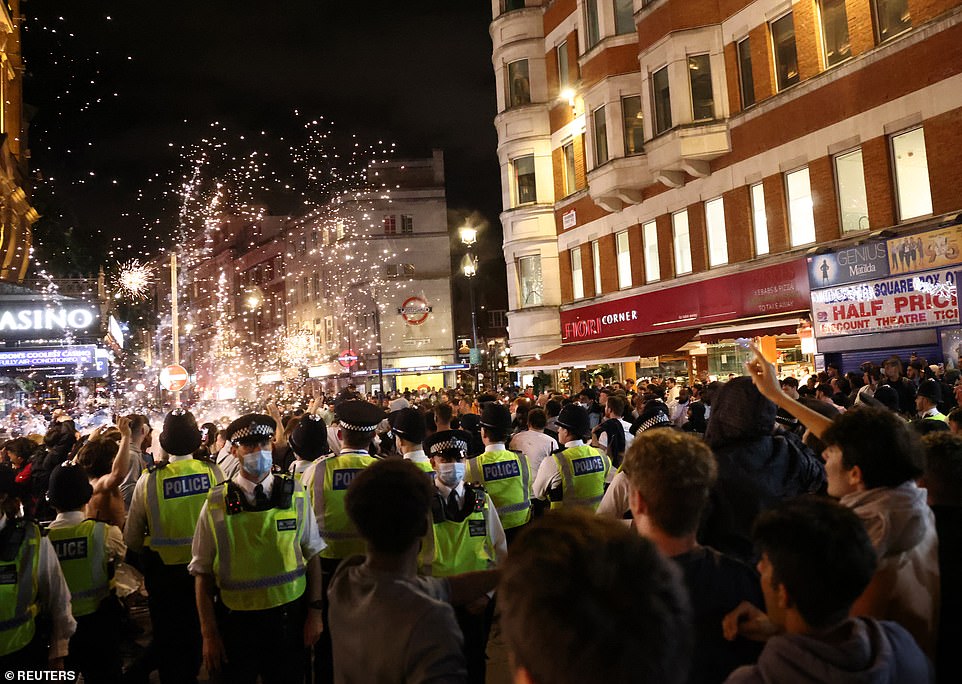 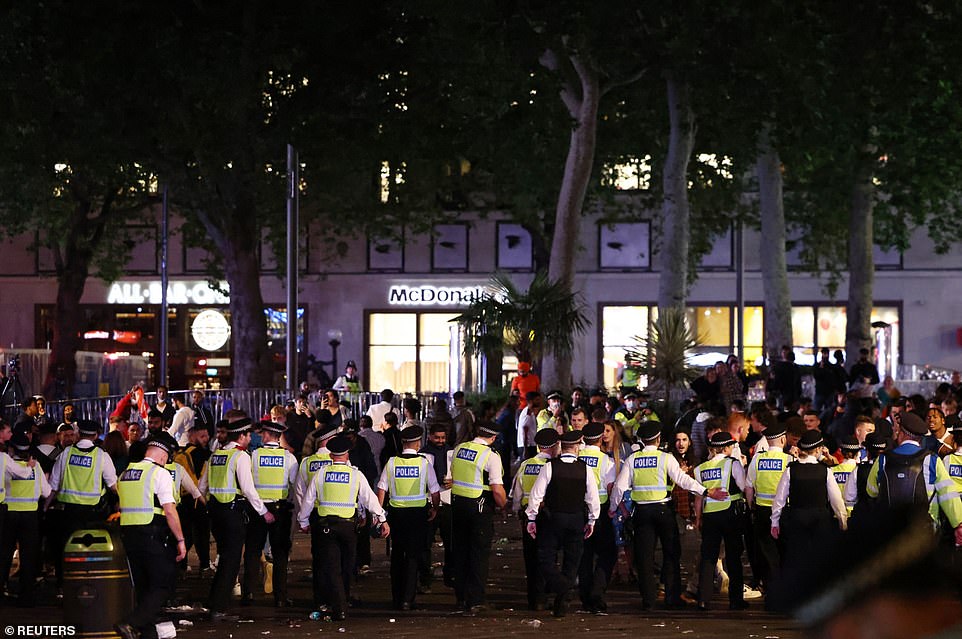 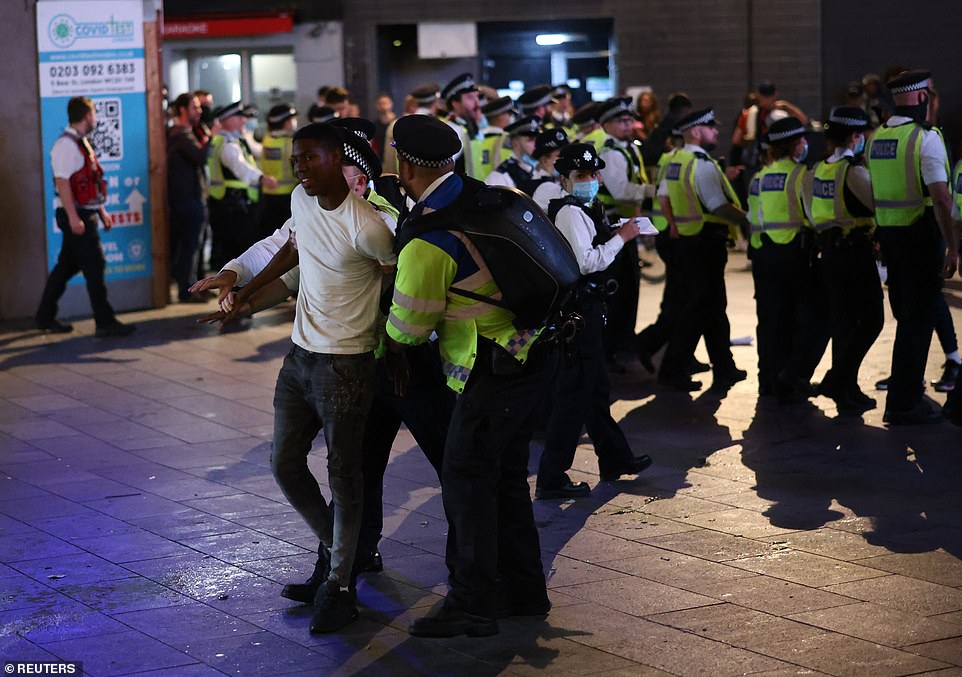 Crowds were caught on camera clashing with the police, as officers held large numbers of supporters

Videos show officers forcibly wrestling people to the ground as they cracked down on the thousands of fans who had converged in central London.

At least 50 officers were seen lining the streets in Leicester Square as they barked orders at onlookers and ordered spectators to ‘move, move, move’.

As unmasked fans chanted and let off a handful of flares in Piccadilly Circus, Met Police officers moved in to disperse the large crowds.

Officers formed human barricades and are pushing back against crowds in the capital as they desperately try to wrestle back control from huge groups of fans.

Large crowds were caught on camera clashing with the police, as officers held hundreds of supporters in the wake of England’s victory.

One officer even went as far as confiscating a fan’s football, prompting a chorus boos from those watching on.

Hundreds of maskless England fans repeated the celebrations from Tuesday and climbed atop the Shaftesbury memorial fountain in Piccadilly Circus, waving the St George flag.

The Met later advised England fans to stay away from a ‘busy’ Piccadilly Circus. MailOnline has this morning contacted the force for any news of arrests of injuries to officers.

While some fans clashed with police, many peacefully partied in the streets and celebrated England’s win in style. 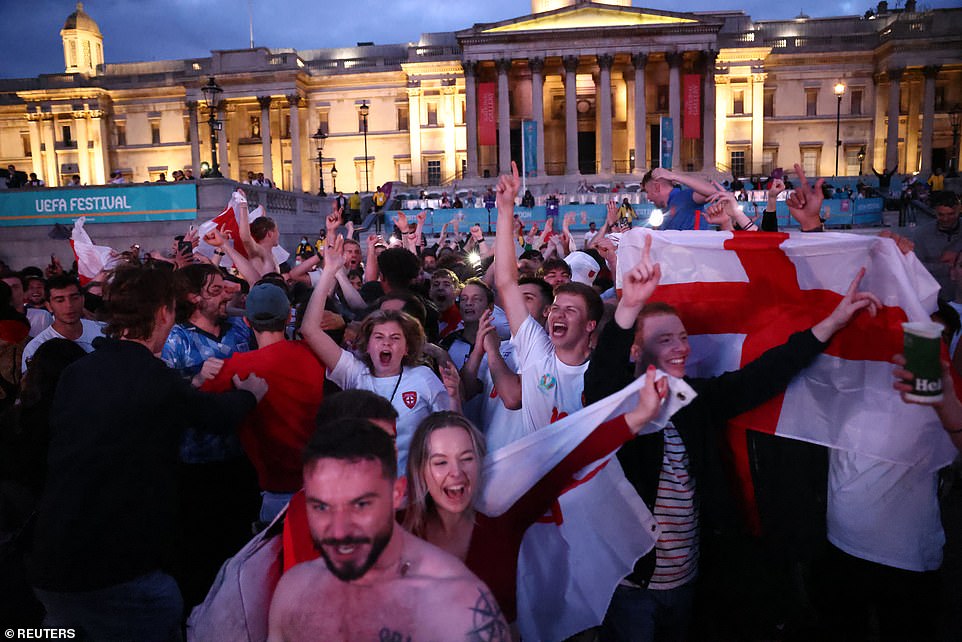 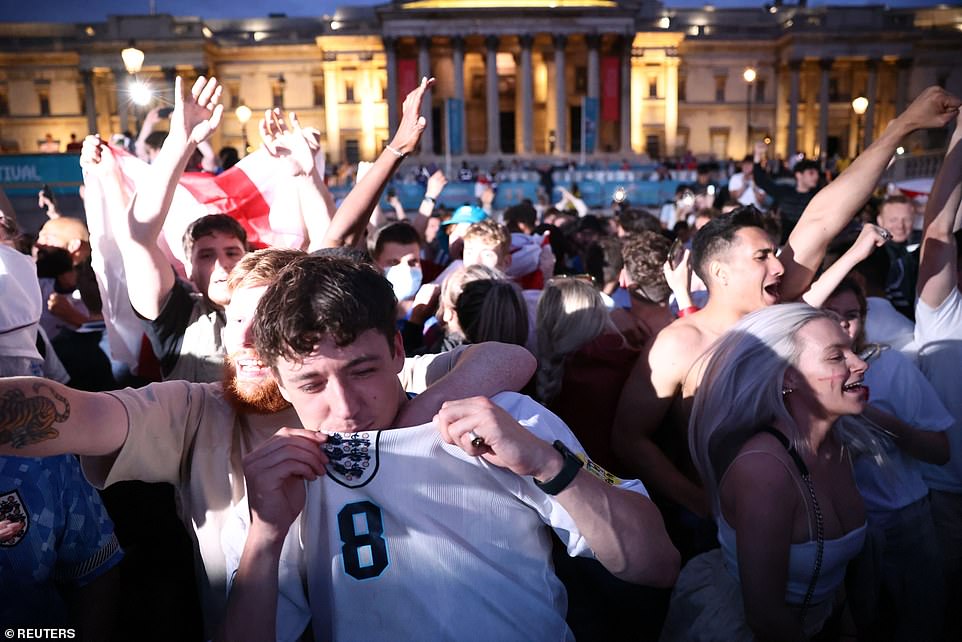 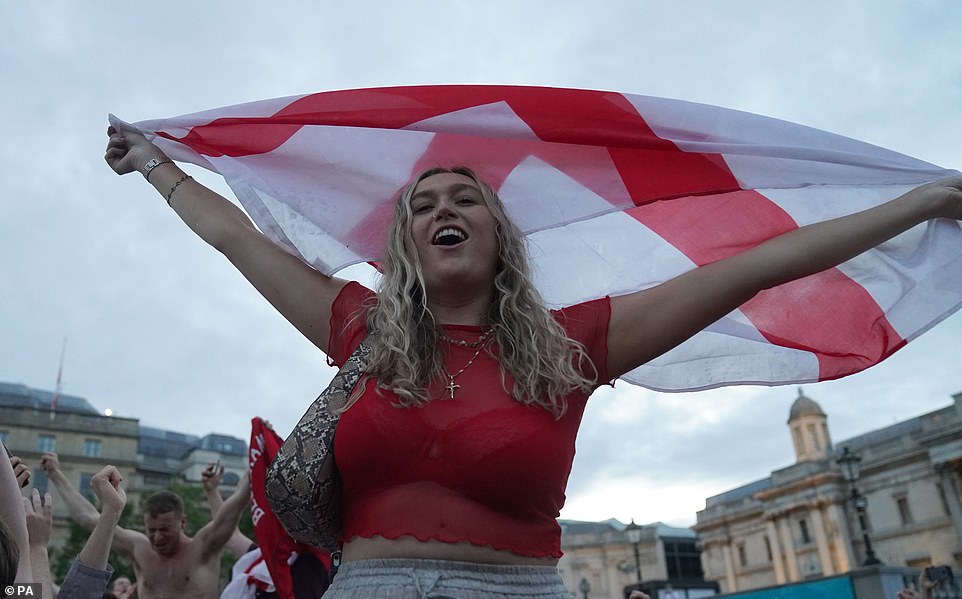 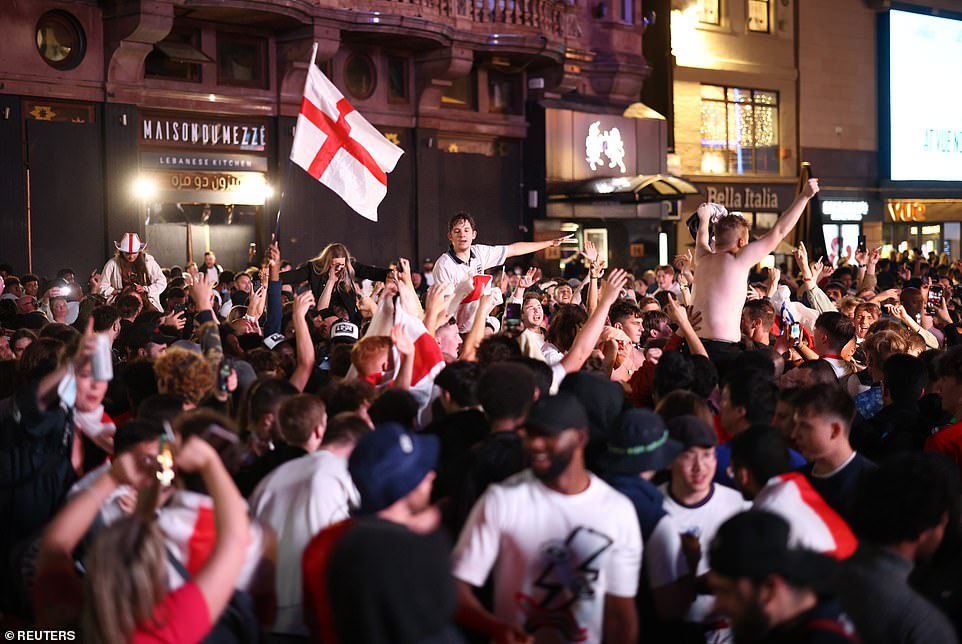 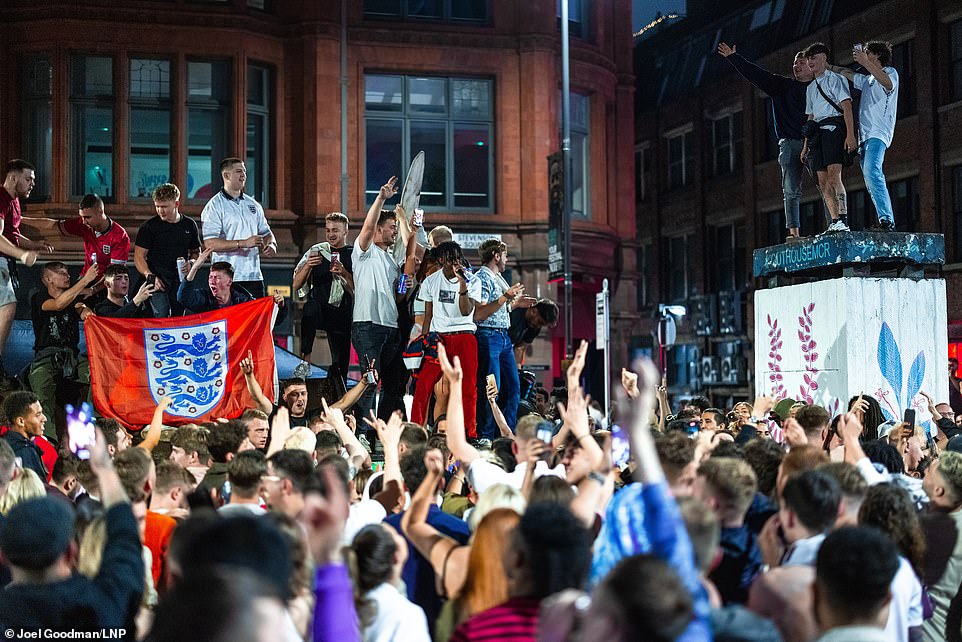 There were also large crowds in Stevenson Square in Manchester last night, as fans celebrated England’s huge win over Ukraine 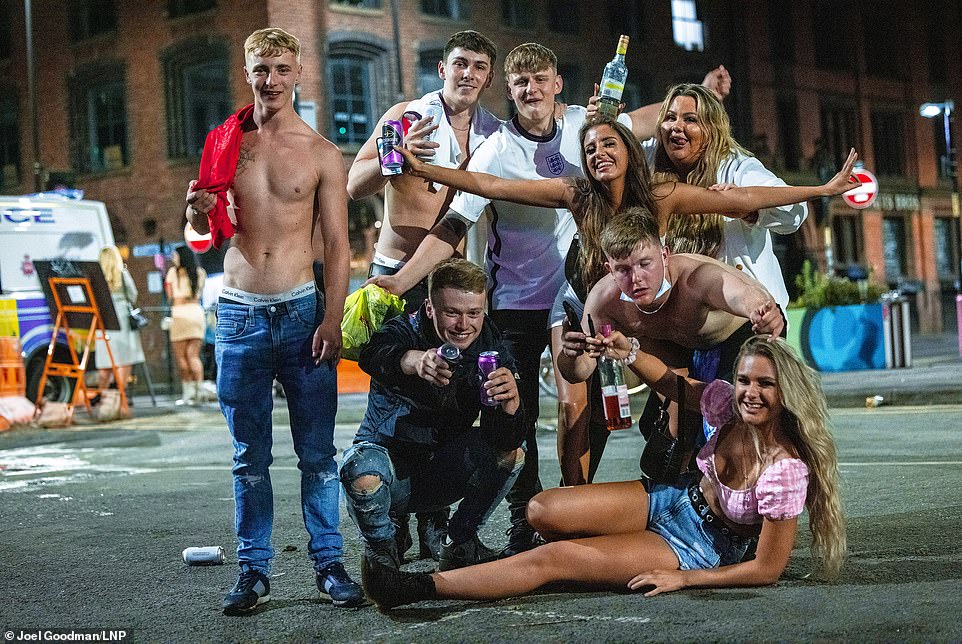 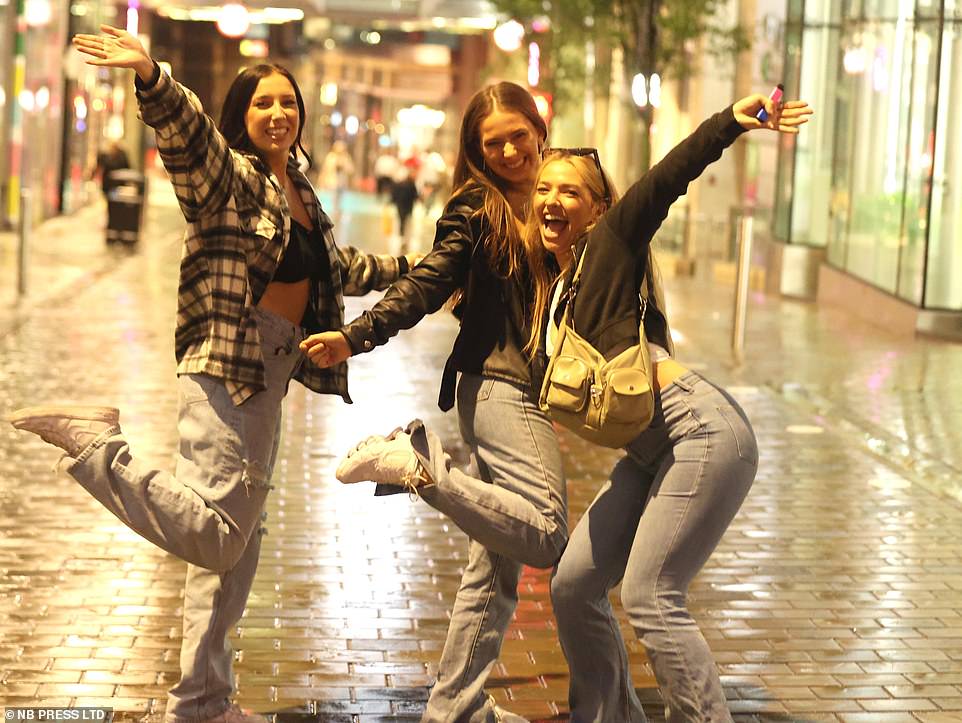 Fans also celebrated in Leeds last night after England’s massive win against Ukraine, moving them to a step closer to a historic final place

Meanwhile, The Duke of Cambridge said he was most pleased with the team’s ‘top performance’ against Ukraine, tweeting out that he ‘can’t wait for Wednesday’s semi final’ against Denmark as he lauded the team’s ‘clean sheet’ during the match in Rome’s Stadio Olimpico.

Prince William – who is president of the Football Association – watched England’s match against Germany in Wembley earlier this week with his wife Kate and their football-mad son Prince George.

But the Cambridges – like thousands of England fans – were unable to travel to Italy for the game on Saturday night because all UK arrivals needed to self-isolate for five days after arriving in Italy – which is on England’s amber list. 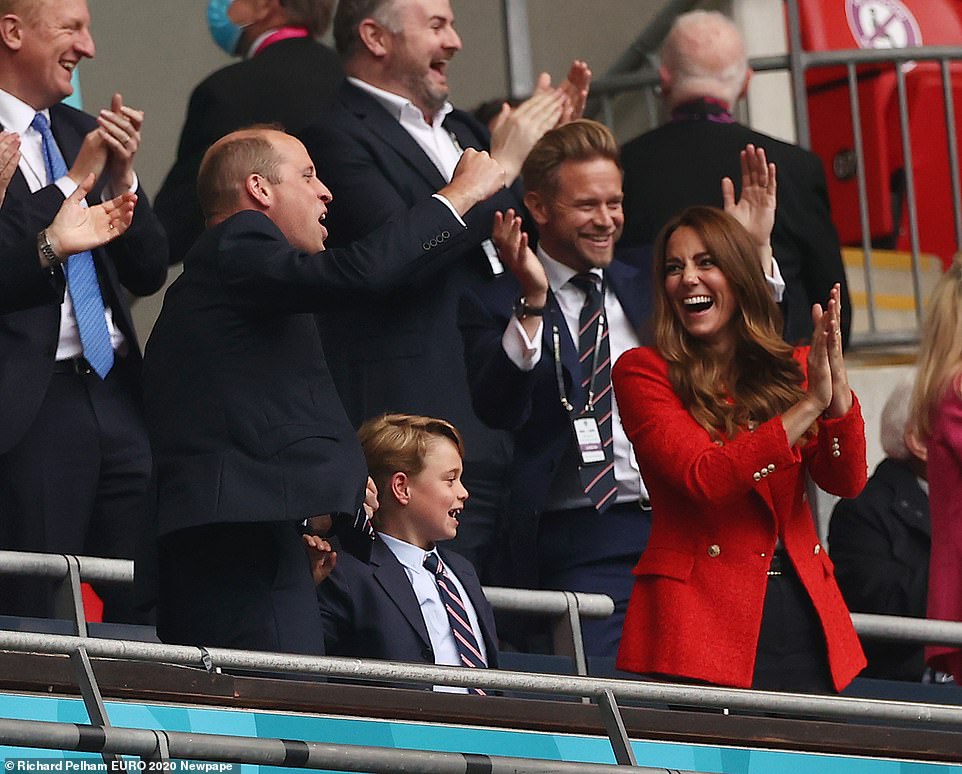 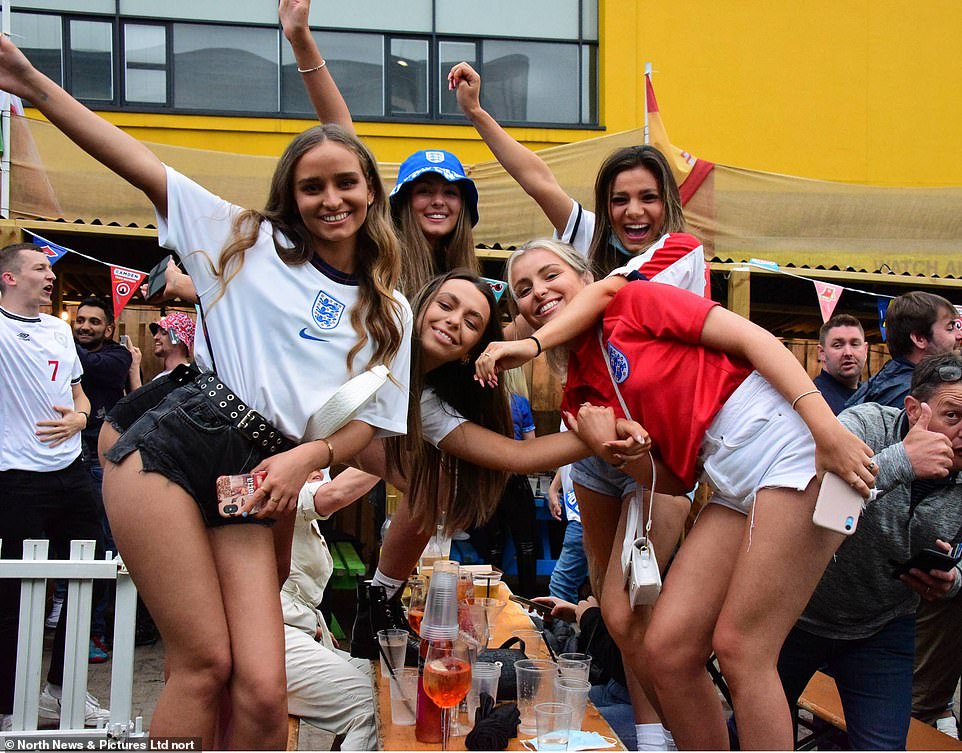 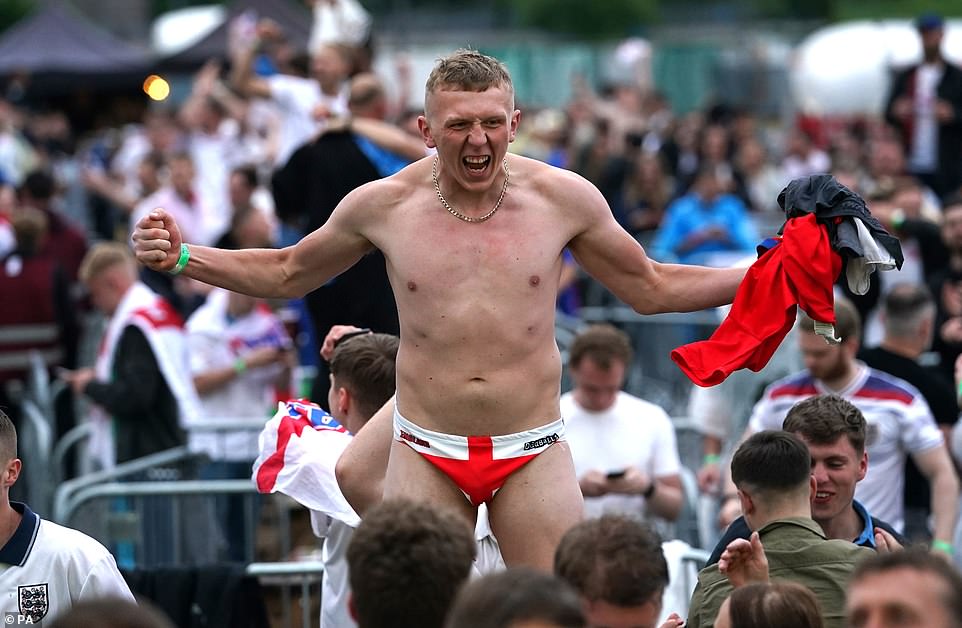 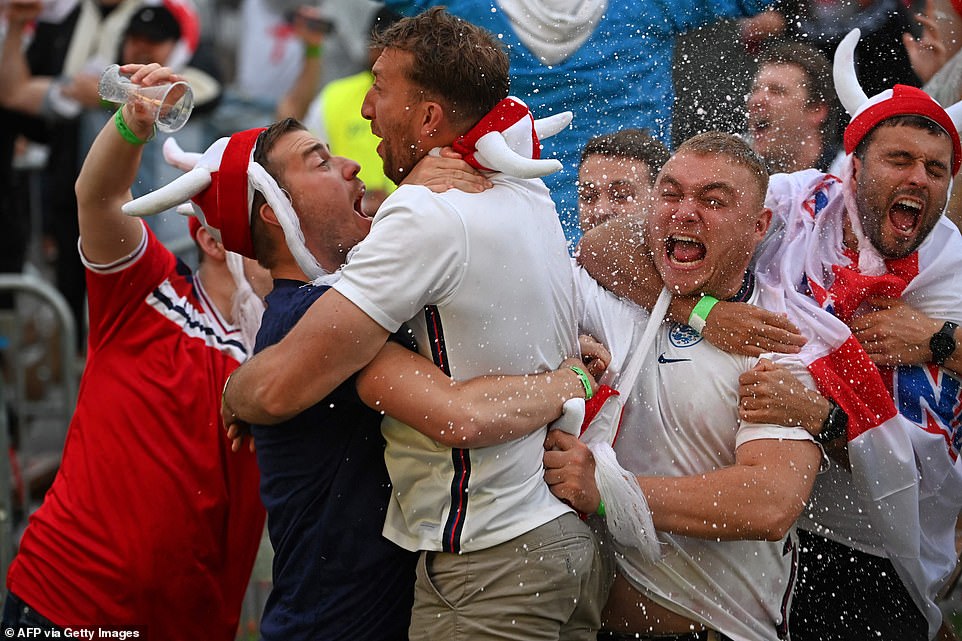 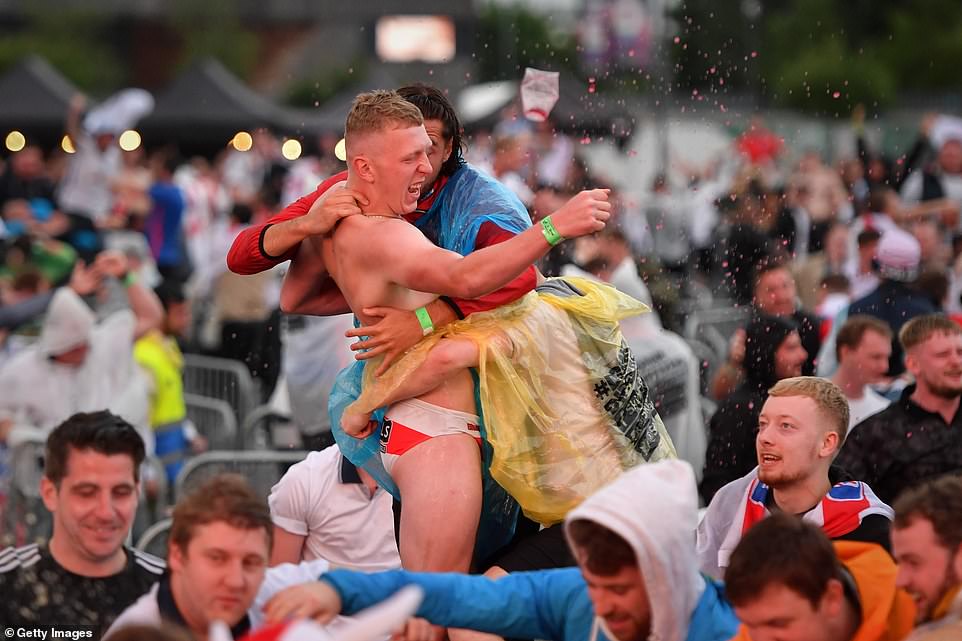 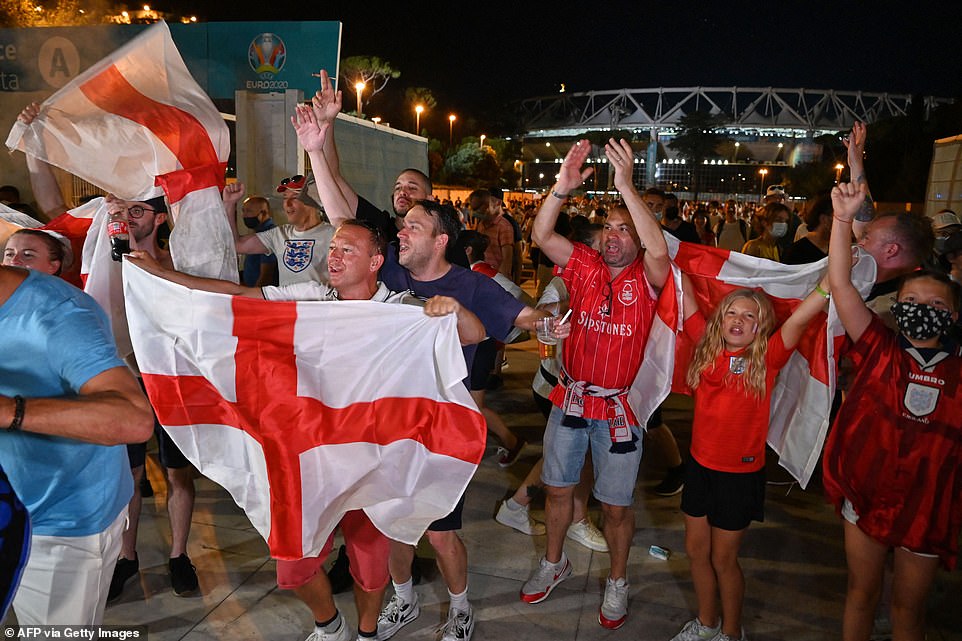 While booming chants of ‘We are going to Wembley’ were bellowed out by crowds in England, while in Kyiv, distraught Ukrainians looked on at big screens with tears in their eyes as the two Harrys dealt them a brutal one-two punch.

The lucky few thousand England fans who had made it to Italy celebrated into the early hours in Rome.

‘It has been the most amazing night,’ said James Curran who had travelled from Prague with two friends for the match. ‘I don’t think anyone in the stadium expected this result. Everyone is in dreamland.’

Steven Langmead almost shouted himself hoarse during the match cheering on the Three Lions.

‘I feel really privileged to have been here. Always had a feeling we would win, but not by four goals. Bring on the semi-final. I’d love to be at Wembley but will settle for watching it on the TV back home in Spain.’