Home » World News » England’s swans are among the new possessions of King Charles III. But that’s not all…by a long way

England’s swans are among the new possessions of King Charles III. But that’s not all…by a long way

London: As apparently endless crowds drifted through the royal grounds of London, queuing to lay flowers and messages of reverence around Buckingham Palace for their late Queen, they were blessed by the sight of white swans gliding serenely on the lake of St James’s Park.

These graceful creatures, it happens, are among King Charles III’s new possessions.

It’s one of the peculiar royal prerogatives passed to him on the death of his mother, Queen Elizabeth II. 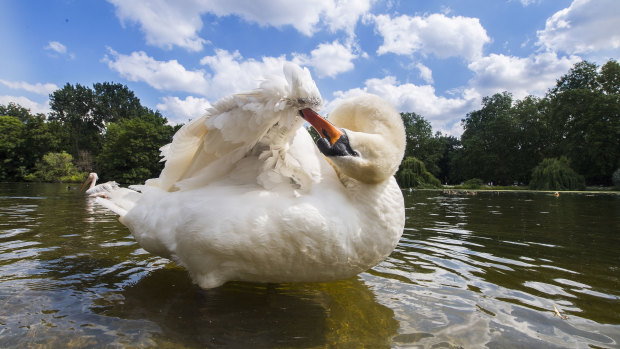 A swan in St James’s Park, near Buckingham Palace. Credit:PA

By ancient right, almost all the wild, or unmarked, swans of England – at least, those quiet and beautiful snow-white birds known as mute swans (Cygnus olor) – are “owned” by each successive British monarch.

Charles can add to his personal wildlife protectorate whales, dolphins and sturgeon that come close to the shore of England, too.

They are identified by ancient and baffling custom as royal creatures of the sea, just as mute swans were declared centuries ago to be royal birds, possibly because a plump swan was considered a delicacy worthy of a King when roasted.

Charles, we hasten to reassure, is a committed conservationist and is not about to roast a swan, nor a whale or dolphin.

However, when a fisherman caught a rare sturgeon off the British coast in 2004, he had to ask permission of the Queen before he could sell it.

King Charles III has quite a bit of portfolio adjustment to deal with in his accession to the throne, way beyond the esoteric possession of wild creatures. 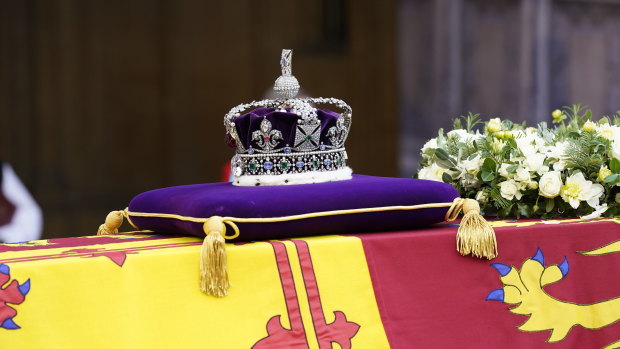 The Imperial State Crown rests on the Queen’s coffin.Credit:Getty

He becomes owner of the hundreds of millions of dollars worth of precious jewellery previously owned by his mother (and becomes custodian as monarch of the Crown Jewels, officially priceless and kept in the Tower of London, but estimated to be worth somewhere between $1.7 billion and $8.5 billion).

However, he loses the most desirable real estate in the entire United Kingdom.

The Duchy of Cornwall – 52,449 hectares of countryside across 20 counties, worth almost $2 billion – made Charles a leading landlord in the United Kingdom for much of his life.

Spreading across the south-west of England, the Duchy comprises rich farmlands, residential, commercial and holiday properties, plus forests, rivers, quarries, and coastline. It even includes The Oval, famed home of the Surrey County Cricket Club.

All this now goes to Charles’s eldest son and heir apparent to the throne, William, new Prince of Wales and Duke of Cornwall.

It has been the way of things since the Duchy of Cornwall was established by Edward III in 1337 to provide financial independence to his son and heir, Prince Edward.

Each Duke of Cornwall and heir to the throne ever since has been granted by charter this great prize, which is expected to fund his public, private and charitable activities from revenue raised.

Best not to weep too long for Charles’s loss of the Duchy of Cornwall, though. 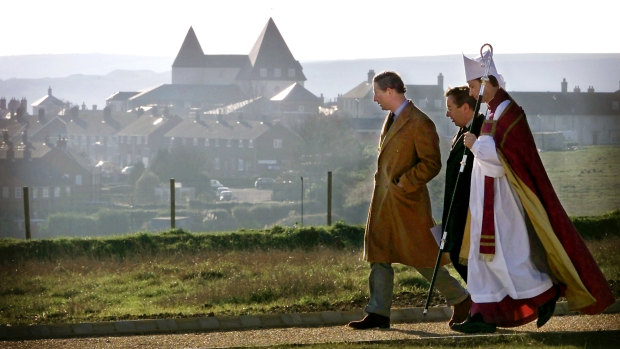 Charles attends a consecration ceremony in 2004 at Poundbury, a traditionalist village built on Duchy of Cornwall land.Credit:Getty

His fortune now rests on his new inheritance of the Duchy of Lancaster, which serves to help support each monarch.

The Lancaster Duchy holds 18,433 hectares of land, urban developments, historic buildings and juicy commercial properties across England and Wales, including the Savoy Estate in London.

Happily for Charles, a law passed in 1993 means he won’t have to pay inheritance tax, which in Britain is usually levied at 40 per cent for valuable inheritances.

The Duchy of Lancaster is valued at around £700 million ($1.2 billion), though the sovereign can’t touch the principal because the entire estate must pass to the monarch that succeeds him or her.

Meanwhile, the late Queen’s horse-racing interests are expected to be passed to the new Queen Consort, Camilla. Queen Elizabeth II leaves about 100 racehorses.

Both Charles and Camilla maintain a passion for the sport and have raced their own horses. The official announcement about Queen Camilla’s role with the Queen’s stable is expected within weeks. 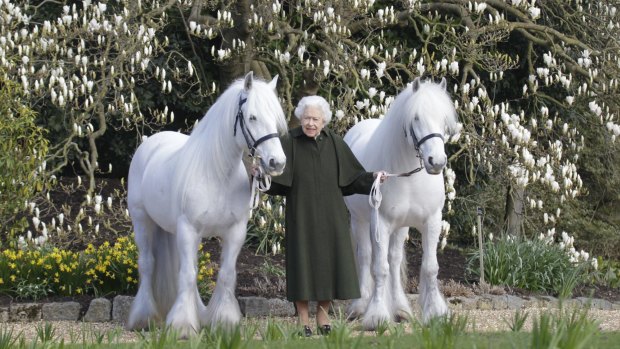 The Queen had a longstanding love for horses. Credit:Getty

The late Queen’s second-eldest son Prince Andrew, the Duke of York, will share responsibility with his ex-wife Sarah, the Duchess of York, for the Queen’s three remaining corgis.

Each year, British enthusiasts take part in a ceremony known as “swan-upping” to count the monarch’s swans on a stretch of the River Thames.

Swan Uppers in scarlet rowing shirts and headed by The Queen’s (and now King’s) Swan Marker, wearing a hat with a white swan’s feather, take to the river in rowing skiffs. 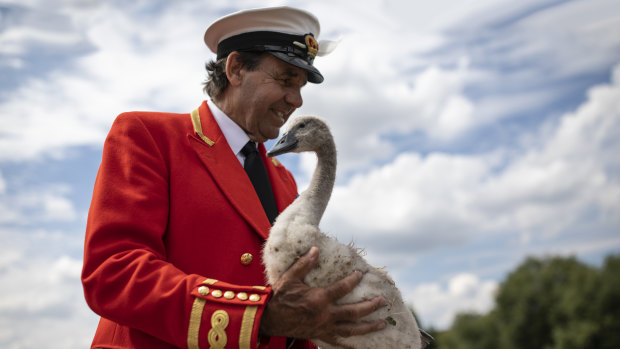 “All up!” the rowers cry as swans are spotted. The Swan Uppers use their boats to hem the swans in, and haul the birds from the water to check their health. The “upping”has been an annual ceremony for hundreds of years, and today it has two goals; conservation and education.

Queen Elizabeth took part in the upping until a few years ago.

It is not known whether Charles III will follow the tradition.

Let’s hope he might, if only for the spectacle.