Ethiopia’s Tigray conflict: The ‘twisted joke’ of denial in the violence is finally laid bare

For the past five months the head of the Ethiopian government has adamantly denied the existence of Eritrean troops, together with their military hardware, in the northern region of Tigray.

The statement constitutes official acceptance of the blatantly obvious.

The near-ubiquitous presence of Eritrean soldiers within northern Ethiopia has become something of a twisted joke among locals in Tigrayan cities like Shire. 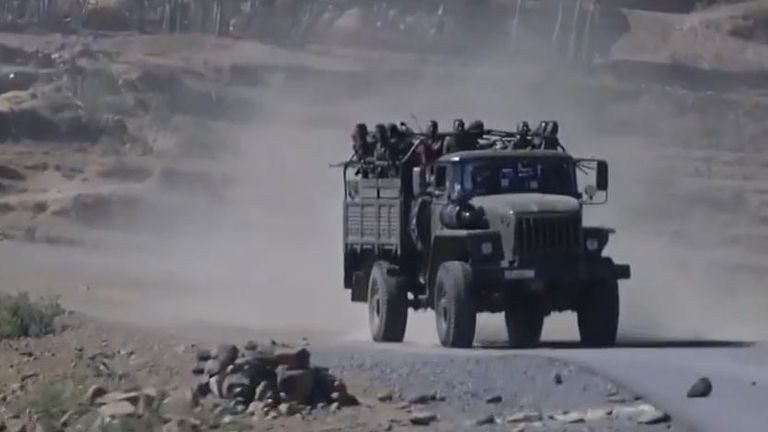 Dressed in distinctive light camouflage, the Eritreans drive into the central business district to buy supplies, get their vehicles fixed or pick up new equipment.

A short drive outside the city brings you into contract with checkpoints manned by surly Eritrean soldiers.

When we tried to visit the remains of the Hitsats refugee camp – one of two camps thought to have been attacked by Eritrean troops in mid-November – we were stopped by a man in an officer’s cap.

“N’tsaeda seb sifkedn” or “no white people allowed” he barked.

Eritrean soldiers giving orders in Ethiopia: we did as we were told and turned the car around. 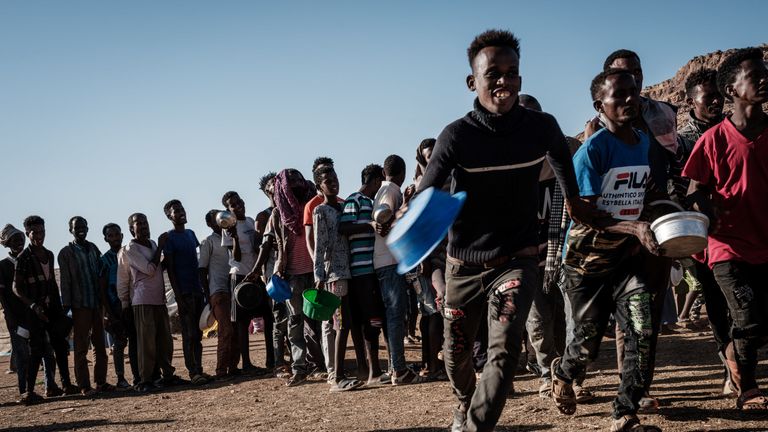 There was plenty of evidence of extensive co-operation between leaders of Ethiopia and Eritrea before prime minister Ahmed made his announcement today.

Locked in combat for years, the Ethiopian head and Isias Afwerki, the dictatorial leader of Eritrea, inked a peace deal back in 2018. It was a diplomatic breakthrough that bagged Ahmed the Nobel Peace Prize.

Now, Eritrea has partnered up with Abiy Ahmed in his attempt to eliminate the political party – and people – who ran Tigray for over two decades, the TPLF.

A mixture of Ethiopian and Eritrean troops control the main cities and highways in Tigray and we spotted Eritrean tanks, armoured vehicles and trucks crammed with troops populating an area stretching from Shire up to the Eritrean border.

We stopped at a village and began to chat to group of local women.

“How many Eritrean soldiers are there?” I asked.

“Do you have to be careful what you say?”

“You cannot say anything. You cannot speak. Whether it’s bad or good, you just say good,” she replied.

We drove on to the second of two refugee camps thought to have been attacked by the Eritrean army. It is called Shimelba and we were greeted by a sorry-looking scene of mindless destruction.

The refugee camp offered shelter and protection to some 11,500 Eritreans as guaranteed under international law. Most countries, including Eritrea, are signatories to the 1951 Refugee Convention.

Yet the sanctuary at Shimelba had been subjected to a terrifying assault.

Administrative buildings were burnt, the health facilities had been ransacked and medicines and supplies had been carted away. Hundreds of thatched roof homes had been systematically burnt.

The only piece of equipment that had been left behind was rusty pair of scales. The attacks on Shimelba and Hitsats, which are believed to have occurred on or around 19 November, took place amid heavy fighting with the TPLF and may constitute the single worst atrocity in this vicious conflict.

I spoke to a man who said he had witnessed the attack.

“What happened to the people who were here?” I asked.

He said: “People were killed by bullets. Heavy weapons and the tanks were firing and the houses were burnt. This is when the people fled. If they caught them, they killed them. It was the Eritrean army doing this.”

We spoke to man who was living in Hitsats when the troops moved in and he told us he was absolutely terrified.

He said: “When we heard the gunshots, people were running all over, to the left and right. I was (living) in ‘Zone D’ and my friend in Zone A was killed.”

“Sammy” says he was interrogated by troops who accused him of working for anti-government parties and an opposition media organisation called ASENA.

He survived several rounds of questioning and was held with other camp residents for the next two months without food and clean water to drink.

“I cry when I think of it. We ate moringa leaves. We passed our time by eating moringa, crushing and eating the leaves. We were really starving,” he said.

“There was no food or water. I wish I’d never been a refugee.”

In late January, the residents of Shimelba were ordered to leave the camp and ordered to walk 100km to the Eritrean border.

Sammy, who had fled the country in 2019 to avoid mandatory, life-time service in the Eritrean military, realised he was going to be forcibly returned.

“I was limping, there was blisters on my feet. We were injured,” he said.

“We would have preferred to die. It was difficult.”

When he arrived in the border town of Sheraro, the refugee concocted a plan to escape.

He asked a soldier if he could approach a local household and beg for scraps of food as the Eritrean Army had not provided them with anything to eat on their three-day march.

The soldier acquiesced and Sammy used the opportunity to slip away.

The majority were less fortunate.

Aid officials told Sky News they believe thousands of camp residents from Shimelba and Hitsats were forced to return to Eritrea with some required to sign “confession documents” on the way.

The present status of these individuals in unknown.

Sky News understands there were approximately 35,000 residents in both camps but only 7,000 have re-registered as refugees in Ethiopia.

Of this group, the majority have relocated to two other camps in western Tigray (Adi Harush and Mai Aini).

We also know that several hundred Eritreans escaped to Sudan, a thousand or so may be living in Shire and a small number have travelled to cities like the capital Addis Ababa.

That leaves a large number of refugees from both camps unaccounted for – with aid officials here in Ethiopia hugely concerned for their safety.

They fear that many thousands have been killed or abducted back to Eritrea – the country the risked their lives to flee.